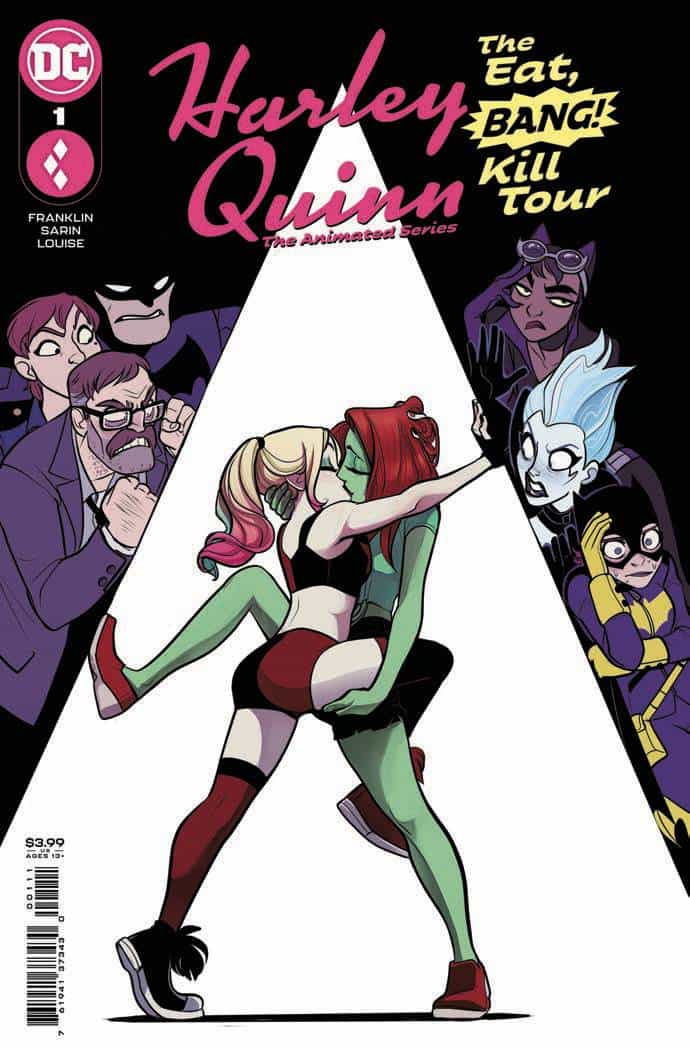 Comic Watch (Lillian): To start us off, for anyone who hasn’t seen Harley Quinn: The Animated Series or is in the dark about the comic, how would you describe Harley Quinn: Eat. Bang! Kill. Tour?

Max Sarin: After getting Gotham almost destroyed due to shenanigans, Harley Quinn is going on a road trip with Poison Ivy. The comic starts where season two of Harley Quinn: The Animated Series ended: Ivy finally said to Harley she loves her. Ivy is having a hard time coping with everything that has happened whereas Harley is all about starting and enjoying their “honeymoon.” They flee from Gotham with Gordon chasing after them with burning passion, not caring who he hurts on his way. More shenanigans ensue.

CW (Lillian): I know this is the first superhero comic for both of you. How does working with someone else’s characters differ from working on a title like Bingo Love (Tee) or Giant Days (Max)?

TF: It’s extremely different, but I love it! It’s like I’m playing with someone else’s toys. With Bingo Love I can do whatever I want to, as they are my characters. With DC, this is their house and I’m respecting the rules of their home, just like how others respected my home with Bingo Love Jackpot when others created content for the book.

MS: I think the biggest difference doing this type of comic is that I get to say “Boom Kabow!” “Wroom wroom” and “Pew pew” a whole lot more due to all the action.

I worked with John Allison’s characters for five years and had a blast while doing so. With Harley and Ivy I was at first worried but after watching the show I got to know them better. I like drawing other people’s characters. As for doing superhero comics… when I was contacted by DC and asked to do this project I felt like a kid in a cardboard box being asked to drive in a Formula 1 race. And now I am pushing onward in the track amongst the speeding cars, enjoying the heck out of it. 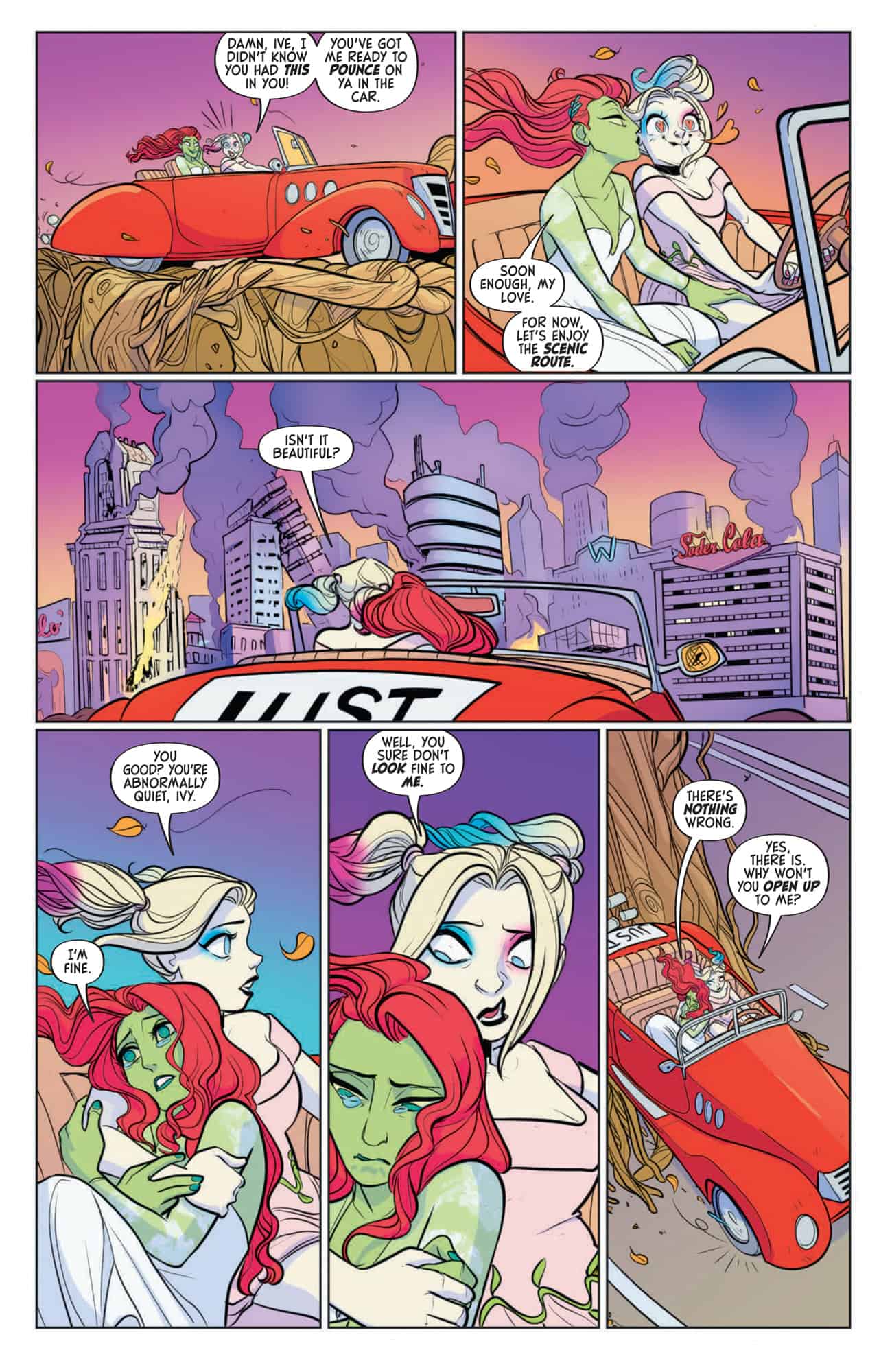 CW (Lillian): Max, in your art, to what extent were you trying to think in terms of adapting the animation of the show to a static medium?

MS: I try not to worry about that sort of thing, if that makes sense? Like, the animation is animation. The creators behind it are one-of-a-kind and it doesn’t make sense for me to try to do what they do: that would be just silly.


As a cartoonist I try to direct the characters in the best way I can: have them act a bit over the top rather than too little. Harley is perfect for this and so is Gordon.

CW (Lillian): The comic picks up after the show’s second season finale with Harley and Ivy riding off Thelma-and-Louise-style being chased by Commissioner Gordon. Other than referencing the show itself and other comics, what were some sources of inspiration both of you took for this comic?

TF: I used a lot of inspiration from my life, Bingo Love and Thelma and Louise.

MS: I just watched the show and enjoyed Tee’s writing, really. The characters are so full of energy that I don’t need any other sources for inspiration. Except music: always the best way to get the comic beating is the beat of a good song. Currently Rare Americans’ “Brittle Bones Nicky 1 & 2” and Bo Burnham’s “Welcome to the Internet.”

CW (Lillian): Tee, you said on twitter that you put memes in your scripts for Max. Is this something you usually do and would you be willing to explain what draws you to using them? And Max, how has Tee’s inclusion of memes in scripts aided or influenced your art?

TF: I’m very animated — I talk with my face, hands, eyes/eyebrows — and when I’m writing something, I wanna properly convey what I’m feeling…memes and gifs help me with conveying how the characters feel.

MS: Okay, I am like… less social media savvy than my grandmother. Who is dead. So memes are not familiar to me, but when I do recognize them the giggle it gives is always a pleasure and I hope to send it onward. 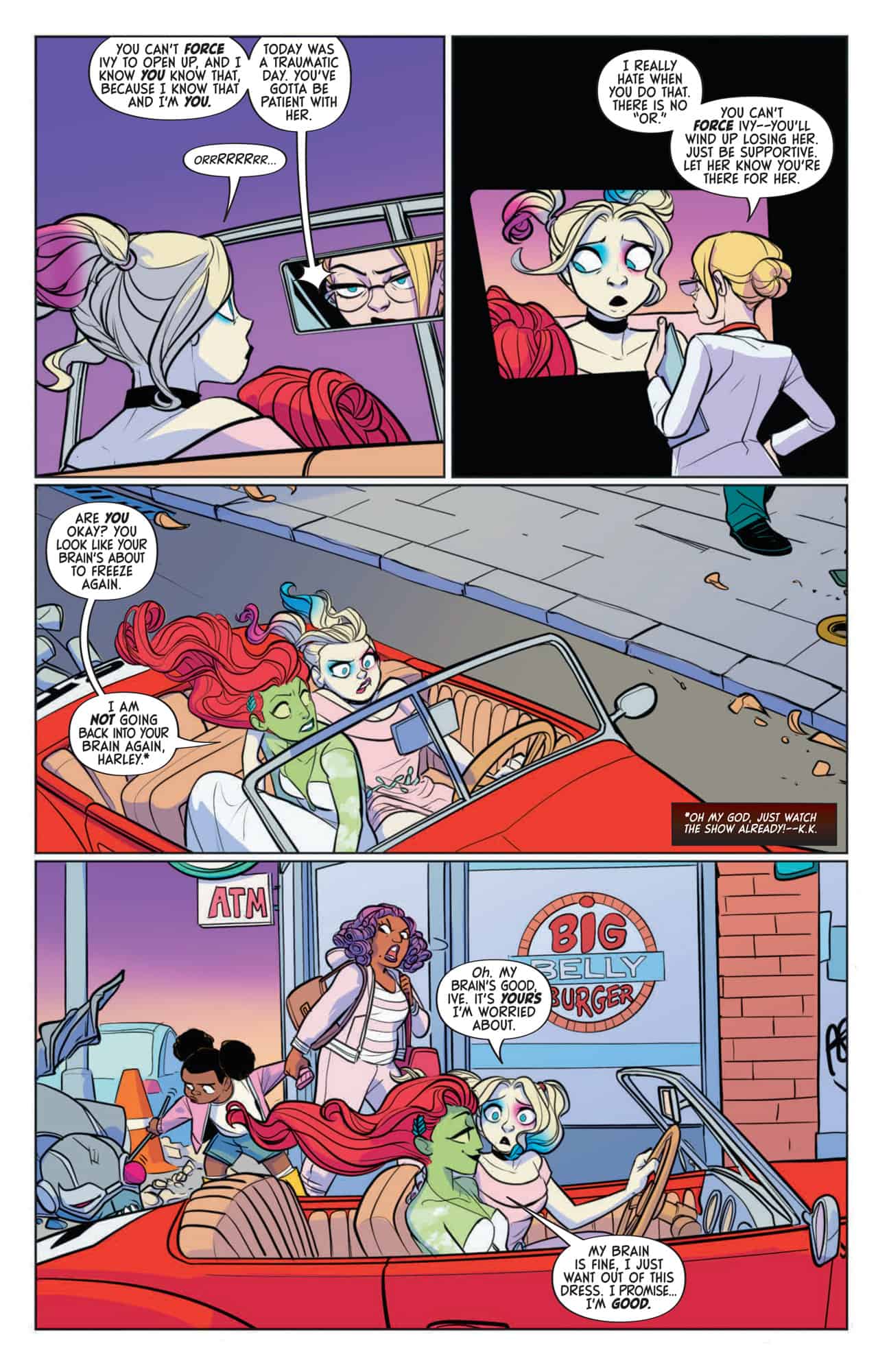 CW (Lillian): Both of you are openly queer. What is it like to create a comic for DC that places a queer relationship — in this case Harley Quinn and Poison Ivy’s — at its forefront?

MS: It is good and important to have queer people creating queer stories. I dare say we make the characters more human because we know there is more to us than just one label. Like in shows and movies queer characters are usually defined only by their queerness and nothing else. I love how finally FINALLY in a mainstream comic there is mainstream same-sex couple…

CW (Lillian): In the queer community, there’s this concept of a Disaster Bisexual: a bi person who doesn’t really have their life together in some major way. Harley and Ivy certainly seem to fit the bill for Disaster Bisexuality in a multitude of respects, i.e.: Gotham is falling to ruin thanks to Harley and Kite-Man just called off the wedding with Ivy. The first issue pushes Harley and Ivy’s communication issues to the forefront. While queer relationships aren’t immune to complexity or toxicity, were there any stereotypes regarding bisexual or Sapphic people that you were keen to avoid? What are you hoping your readers will see in this relationship?

TF: I don’t have my life together at all, neither does Harley and Ivy. They’re navigating this relationship as openly queer women with a ton of baggage from their past. Gotham City’s absolutely in ruins thanks to Harley being friend-zoned by Ivy and she has to deal with why she reacted that way. Queer folks aren’t immune to the BS, same goes for anyone in a relationship — relationships are hard.

I hope the readers see that this relationship isn’t going to be all sunshine and rainbows, but I can absolutely reassure readers that I won’t break up the happy couple.

MS: When I draw characters, I face them as people and hope the readers can receive them as so. I trust with Tee I don’t have to worry about toxic stereotypes which are used when catering them to usually straight white cis men. These characters are not defined by their queerness. They are defined by their emotions and actions and needs and wants. Same as me, or you.

CW (Duna): Tee, a big part of your body of work (Bingo Love, Jook Joint and this series) deals with reckoning with toxic or abusive relationships and the fallout that that creates. Is there any particular inspiration for how to portray this in the page, and, most importantly, make transformative narratives out of it (in the way you show harsh truths but also imagine possibilities coming out of them)?

TF: I’m a domestic violence survivor and I know all too well how toxicity and abusive relationships are unfortunately. I needed to create stories that show those dealing with abuse/toxicity coming out on the other side with peace and happiness. It’s what we all really want. 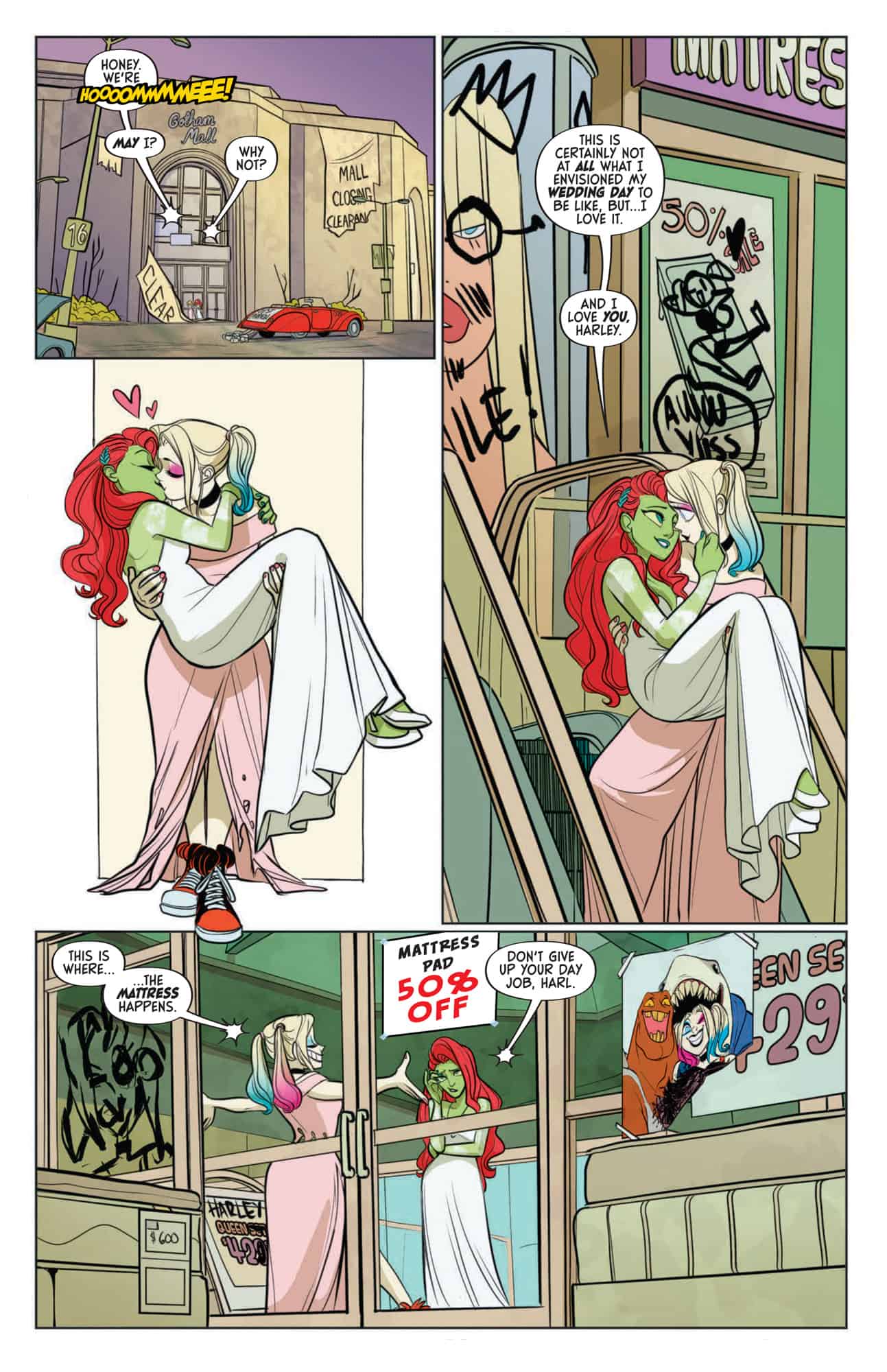 Special thanks to both Tee Franklin and Max Sarin for taking the time to speak with us. For a moving, shenanigan-filled read, check out Harley Quinn: Eat. Bang! Kill. Tour on DC Universe Infinite today or eagerly wait for its physical release on September 14th. And stay tuned for Comic Watch’s review!