Bi Visibility: A Bisexual Comic Book Anthology, now on its last week in Kickstarter, edited by Kat Calamia and with a wide array of creators tackling graphic stories with very different subjects and styles, still maintains a common thread of indie, intimate and confessional art that relies on emotional punches and rests in the best of ways.

The anthology goes through a journey of various authors’ visions of intimate, life changing, funny or even infuriating moments. It opens with ‘Will I Regret It?’, in which Calamia gives detail to the difficulties of coming out to family and the negotiation of nuances and respect you have to do again and again, with Bustamante’s art providing visual sadness, doubtness and friction ending up in a joy that fills the whole page. And it closes with Rose-Lyon and Widjaja’s ‘The Bi Card’, which is a hilarious but poignant concept taken to the most absurd. And, in the space between these weighting personal confessions and these fun, sarcastic, to-the-face small revolutions, it finds its place and pacing, flying by and urging rapidly for a second read. 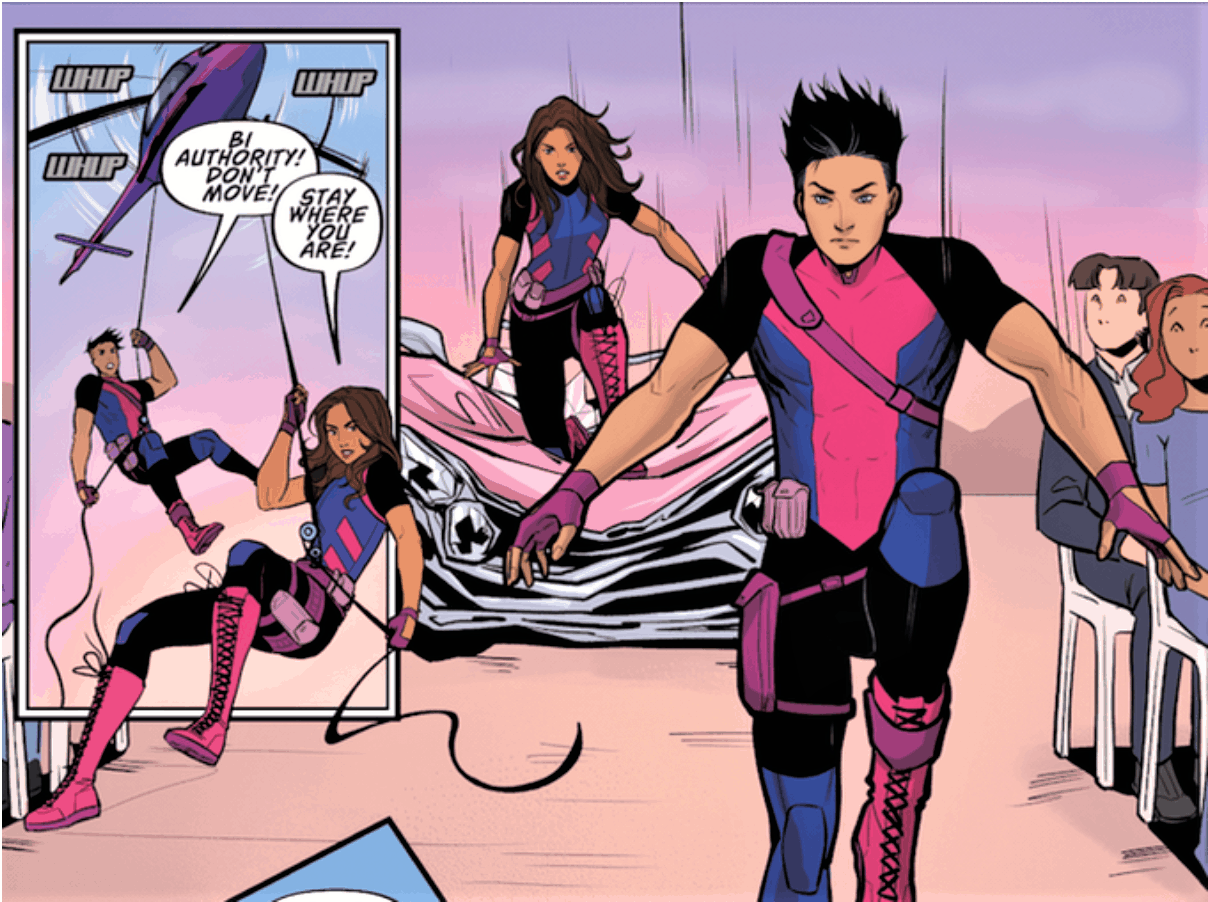 Asides from the beautifulness and stylistic cohesiveness of the art (with highlights in its commitment to detail and preciousness by artists like Elaine Tipping or Megan Huang), and the playful, dynamic, but equally cohesive lettering by Taylor Esposito, the anthology has another common thread: all of these stories speak about bisexuality in a very explicit, central, intentional way. There is almost none of these short comics that could be considered a comic which happens to have a bisexual character, as all of them recall in some way or another how the bisexuality shapes characters, storylines, relationships. Constantly dealing with the complexity of bi awakenings, negotiation of identities and lived experiences, lifelong struggles or small moments of revelation, the anthology puts bisexuality front and center. 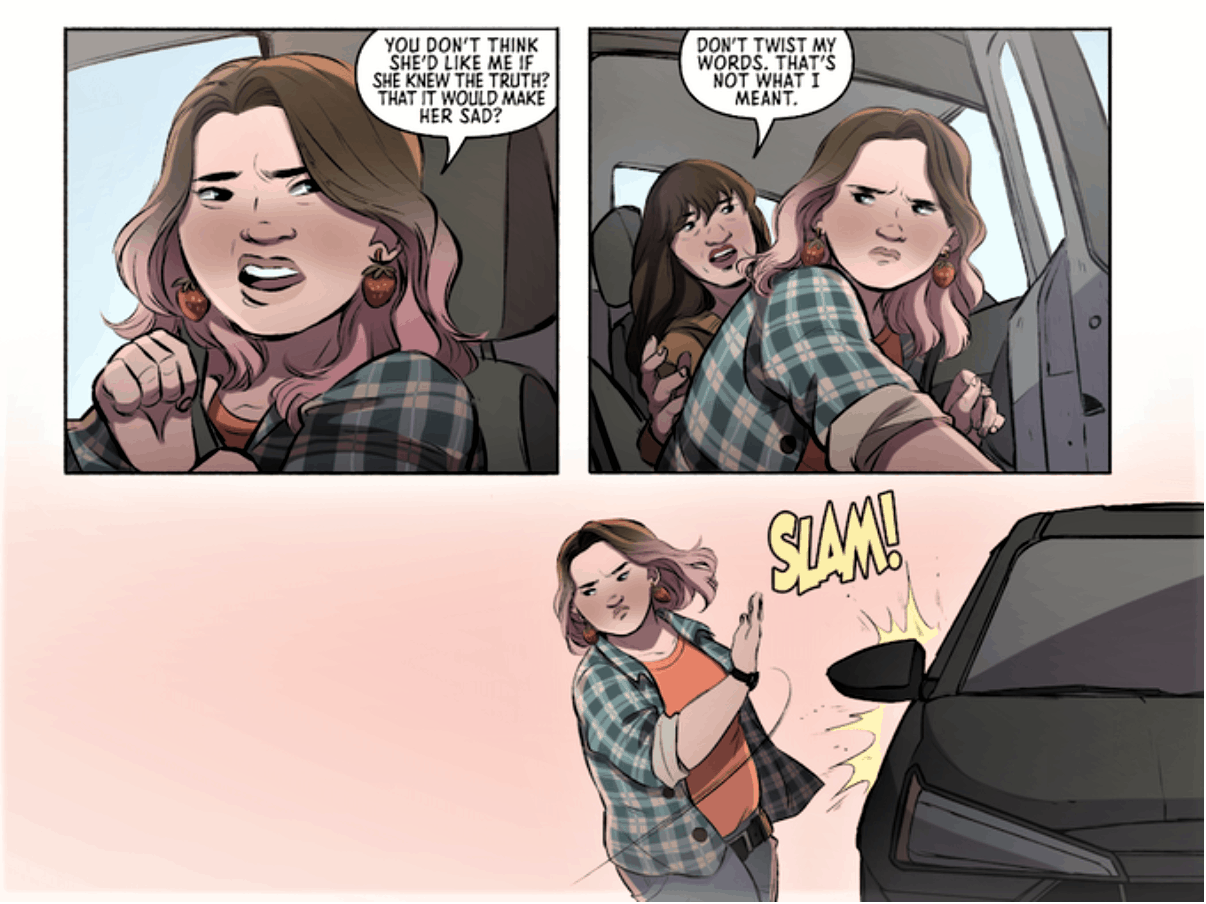 Even the most metaphorical story here, ‘My Voice’ by Christie Porter, Phillip Sevy and Sarah Stern, in which a bisexual protagonist that is also half-mutant half-human navigates closets, openness and activism, feels so much like shining a light on the role of so many bisexuals (open or not) in historical gay liberation, and how that complex role plays out.

But, even while being front and center, this anthology is accessible in its concepts, getting points across by RRPGs, fictional videogame settings and just overall entertaining and visually rich settings. There is room to grow, like the need of more inclusion for trans and non binary-centered storylines, as well as some stories that could have probably been elaborated further, like the comic dealing with polyamory (‘A Most Unusual Trajectory’ by Andrea Towers and Elaine Tipping), in which I would have loved to see how actually the other two people get involved, instead of assuming the plot’s convenience. But those needs for further elaboration can be explained by both the length of the comics, and the explicit effort of the anthology in putting personal bisexual experiences of these specific creatives front and center, not sidelined, not secondary, and not sanitized to make readers more comfortable with concepts or storylines.

As I talked with Kat Calamia just this Thursday, on Bisexual Visibility Day (and you can watch in the whole video below), Volume 2 is soon to be on its way, opening submissions in the upcoming months, and some of the threads that this first edition started pulling from will definitely be further explored, elaborated, always understanding the wide variety and complexity of experiences and how those don’t wise to be contained, but expanded, felt, understood and at least visible.

Pdt=Thanks to Gabriel de Jesus for the second look at the article and live-help with the interview.