Comic Watch’s own Nicholas Osborn recently had the exciting opportunity to catch up with Warwick Johnson-Cadwell to discuss the highly anticipated release of Our Encounters With Evil, a sequel to 2017’s Mr. Higgins Comes Home. Check out the full interview below to learn more about the challenges of taking on both the writing and artwork, what the creative process with comics great Mike Mignola is like and so much more!

CW: Our Encounters with Evil is described as a sequel to the 2017 hit graphic novel Mr. Higgins Comes Home, so what were your feelings on returning once again to the adventures of Professor J.T. Meinhardt and his assistant Mr. Knox?

WJC: I could not wait to see them again. Working with Mike Mignola on Mr. Higgins Comes Home was a fantastic experience and every character he’d written came so well formed to my mind. A consequence of us sharing such a love of the gothic horror genre, I suppose. As I was drawing [the Professor and Mr. Knox] (and all the others) I was imagining all the things that these characters would have been up to leading to our introduction to them at Castle Golga.

CW: You are credited with both the story and art in Our Encounters With Evil, so what can you tell us about how the creative process differed from Mr. Higgins Comes Home?

WJC: It’s the biggest thing I’ve written so far, and a challenge to exercise those skills. With Mr. Higgins I got the idea, story, and then script from Mike. As a massive fan it was a great big treat. It also made for a more assuring experience overall. This time it’s much more on my own shoulders and the nerves are kicking in much more leading up to the book’s release.

CW: Our Encounters With Evil recounts three distinct tales, so can you shed some light on the decision to structure this book similar to an anthology?

WJC: These guys are bursting with adventures, there’s so much they have done that I felt this book should be a window into their lives. This is their calling, and a varied and busy life they have chosen. 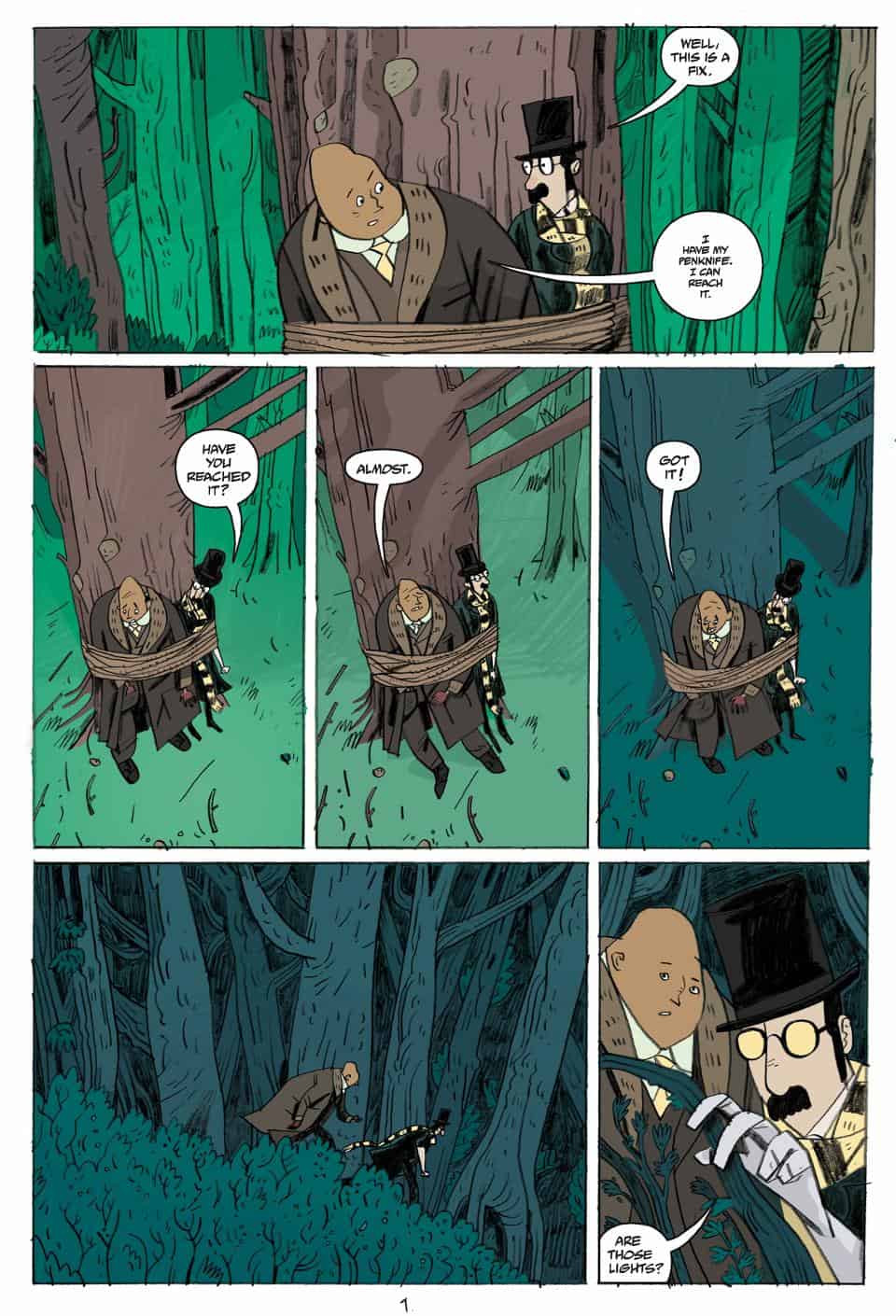 CW: With this new chapter, we are starting to see some incredibly dynamic and interesting world-building happening. Can you give any insight into how this influenced your approach to the artwork?

WJC: These guys, Professor Meinhardt, Mr. Knox, and also Mary Van Sloan, are fairly normal down-to-earth 19th century professionals. But their vocation is totally fantastical. There is a familiarity with where they come from; we know vampire and werewolf legends well enough and we’ve seen how they’ve been used and converted in stories and cinema. As a consequence I felt I could pick up an idea and run with it. The Prof and Knox are ideal for telling these wild stories as they are (so far) reliable and sensible characters that keep us grounded in that supernatural world.

CW: Were there any visual influences you felt were important to convey in Our Encounters With Evil that separate it from the first story?

WJC: I did want there to be a familiarity of sorts between this and the first book, but I was also keen to explore the wider world too. There could me many more castles to visit, villages and forests too and I did want to keep it recognizable I felt we should head out and explore. The nature of the stories themselves required different worlds within their world and that brought different flavors to this book.

CW: This book sees the introduction of a dauntless vampire hunter named Ms. Mary Van Sloan, what can you tell us about this exciting new character?

WJC: She is exciting I think. The Professor and Mr. Knox are both very capable but so far have succeeded as much by circumstance as skill or action. Van Sloan brings the fury. She started off as one of a variety of companions to the pair and turned up a little late in my mind. She’ll be joining their adventures more often and I’d like to see her in stories by herself.

CW: Classic horror inspirations are found all throughout the story thus far, but was there anything in particular you sought to accomplish with Our Encounters With Evil?

WJC: I very much wanted to celebrate the gothic horror genre as we did before with Mr. Higgins. And I wanted to give the impression that Meinhardt and Knox’s experience there was just a part of their battle with supernatural evil. These stories could be before or after Mr. Higgins. Or Mr. Higgins Comes Home might sit in between any of these three. 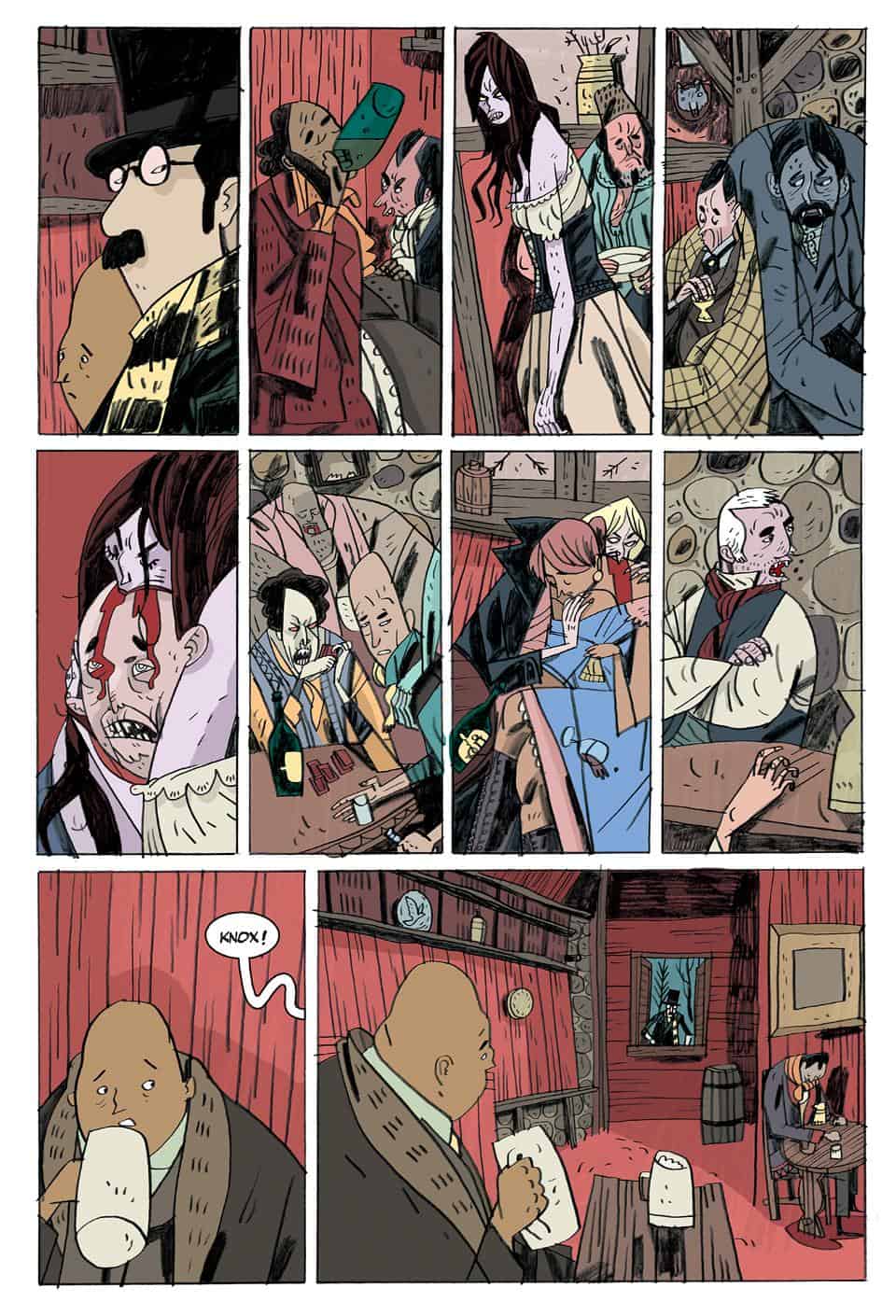 CW: Would you say Our Encounters With Evil is a good jumping-on point for readers looking to dive right into this rich gothic world?

WJC: This is a tricky question. There is a variety in this book that suits exactly that purpose and certainly I’ve tried to provide the richest gothic experience possible. But Mike Mignola is a master of this world, so my advice would be to buy Our Encounters With Evil AND Mr. Higgins Comes Home.

CW: The passion and thoughtfulness that went into crafting these stories from everyone involved is remarkably apparent, so is this a world that you would like to return to again in the future?

WJC: Thank you, I’m so well looked after by Mike, Katii, Jenny, Clem, David, and everyone else who makes these books work. Each page, character, or idea in them brings so many new exciting ideas that there is loads more tell, so I sincerely hope we get to return again.

CW: Lastly, just for fun, do you have a favorite character so far from any of the adventures of Professor J.T. Meinhardt and his assistant Mr. Knox thus far?

WJC: There are loads! Those that are prominent characters and those that might just be a face in a crowd. Baron Ladzo in Mr. Higgins will always have a special place. He’s the vampire intruder in Professor Meinhardt’s room in the first few pages. He didn’t have a name at first so much later when he is mentioned by Count Golga to his butler Ugo. This was one of a few moments when the enormity of the project I was working on with a hero of mine hit home. Always like to see Baron Ladzo (that old dog) after that.

There it is! Be sure to grab your copy of Our Encounters With Evil from Mike Mignola, Warwick Johnson-Cadwell and Clem Robins when it hits stores on November 13th, and if you haven’t already, go out and snag a copy of Mr. Higgins Comes Home. You won’t regret adding it to your collection!