Close to the Marrow: An Interview With David Moses LeNoir

Galactic Junk Squad (Well, More Like Family) is a powerhouse, a comic of glory, of adventure, of family. And, its author, David Moses LeNoir, is a dynamite guy, who has impressed me in his work and as an online presence, for longer than I can readily recall.

Close to the Marrow – An Interview With David Moses LeNoir

Hedge Coke: What is the most surprising reaction you’ve had from a reader?

LeNoir: I’m genuinely surprised when someone enjoys it – every single time! I think the best compliment came when my friend said it was like New Gods meets Arrested Development. That was the first issue, which leans more heavily on attempts at humor and quirkiness than the following two issues, but it was gratifying. Or there was a kid who said, “Do you have any more? I’ve read the first issue 11 times already.”

Frankly, the fact that we’re doing this is a delightful surprise – you’re one of my favorite comics critics! Even if you were to bash GJSWMLF, the fact that you spent any of your attention on it is meaningful to me. Sorry for gushing a little… 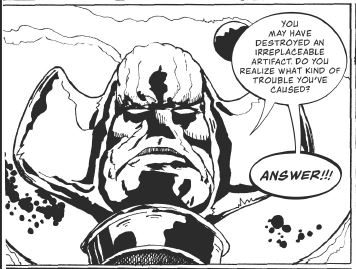 Travis Hedge Coke: How big and influence is Jack Kirby?

David Moses LeNoir: It’s hard to overstate Kirby’s influence – to the point that now I see nature through a Kirby lens. Like, the way a window fogs up there will be Kirby krackle-like condensation patterns; or when I see metallic surfaces, I see the light playing off of them as entirely Kirby-esque. Pour a cup of water on the street, I see krackle in the splash patterns on the concrete.

There is an essence that Kirby touches that few others reach. His work feels like a pure translation of how he takes the world in, and it’s soul-nourishing.

More than anyone else, I reference him on how best to capture the idea of what I’m trying to convey. I’m appreciative of Ed Piskor likening how we reference other artists’ work to sampling in hip-hop. That framing helped me not be as anxious of being found out as a fraud when I rip a Kirby visual and put it into the context of my own stories, haha.

Hedge Coke: What is more important: atmosphere or clarity of action?

LeNoir: Something I’m always trying to understand is how things can be understood without being said. How is that accomplished? A great deal of meaning can be conveyed without the reader knowing exactly what is happening. For example, each time I read Eleanor Davis’ Why Art? I come away crying. But when I try to figure out what specifically gets me to that point, I can’t locate it. It’s the culmination of the experience, not a single moment. 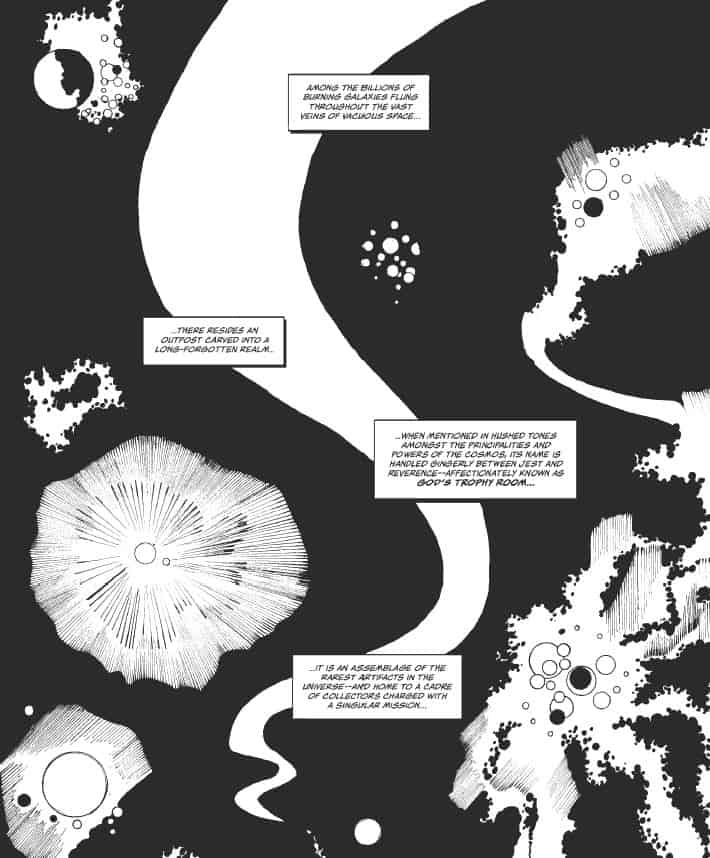 For GJSWMLF, I’m trying to capture a certain 60s-70s pulpy sensibility, which relies heavily on clear action. So I’d say which one is more important depends on what the conventions are being employed. And then how do you want to subvert them? Alan Moore is great at subverting genera. His run on Swamp Thing is some of my favorite comics.

Ultimately, I think atmosphere. Yeah. That’s my answer for today!

LeNoir: Growing up (late 80s/early 90s), I loved to draw. When I was about six, one of my brothers’ friends showed me some comics that he was making and it blew my little mind. I started developing my own characters that night. My brothers and I were also heavy into card collecting; it was the speculator boom, so comics were a part of that, too. Then in mid-high school I “grew out” of them.

Comics resurfaced for me when my oldest brother lent me Watchmen about five years ago and I caught a glimpse of the capability of the medium.

I’ve tried my hand at writing for the screen, but I had an epiphany when I read Scott McCloud’s The Sculptor. I saw so much of myself in that book, in the main character, and the intense effect it had on me made me consider writing comics. So I wrote a couple of things and was looking for artists to work with when my wife said, “Why don’t you do the art?” One night, the idea for GJSWMLF popped into my head and I knew I had to do everything on it (however, I tagged the fantastic Hassan Otsmane-Elhaou to do the lettering, which was definitely a good choice).

I love what comics can do that no other medium can do. Time and space are malleable. The reader has a measure of control that they don’t have in other media. 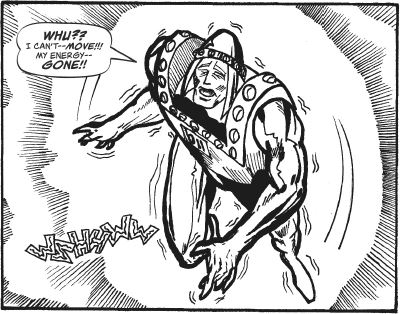 You can do anything you want without needing a massive budget. There is also a sense of belonging to a crazy, beautiful tradition. Some of my heroes did this, and I get to do it too!?

Hedge Coke: What is the best music for inspiring comics?

LeNoir: One thing I love is when a musician or group develops a paracosm – a parallel interpretation of the world according to a mythology they’ve developed. Devo did this, and probably my favorite one is what George Clinton accomplished with Parliament and Funkadelic.

Frankly, I don’t listen to much music when I draw. Silence is a premium these days, and I usually work late while the family is sleeping. Although, the music that most closely correlates to a sonic interpretation to Kirby’s sound, in my book, is synth-heavy funk, like Dam-Funk, Parliament/Funkadelic and offshoots like Quazar and Mutiny, and Minneapolis staples like Prince and Andre Cymone. Curtis Mayfield, Marvin Gaye, Billie Holiday, John Coltrane, and D’Angelo… Whatever strikes close to the marrow of life inspires me.

Hedge Coke: What comics are you reading these days (new or not)?

LeNoir: Of course, I’m loving all the Kirby re-issues – the cheap Marvel True Believers, the DC runs, and anything I can get my hands on!

I’m re-reading Hellboy in Hell, which I think is the greatest comics series of the past 10 years, at least.

Current series I’m enjoying are Nnedi Okorafor’s run on Shuri; the illustrious return of Brett Lewis on Thief of Thieves; Eve Ewing’s Ironheart; Tom Scioli’s Go-Bots is one of my favorites right now, which feels like someone is playing with his own set of toys – there are no limits on what he can do with the property, and that is a rare thing for an IP one doesn’t own.

I’m a big fan of Megan Turbitt, Bill Wehyman, Matthew Allison, and what Dave Baker is doing with the Shitty Watchmen/Shitty Dark Knight series. I love the Stewart Brothers’ output so far. Alexis Ziritt, Charles Glaubitz, Stome Smith; I really respect all of these folks and always look forward to new releases from them.

Hedge Coke: What else influences you?

LeNoir: Mignola is another big one right now. Cosmic Odyssey is, to me, the most worthy followup to Kirby’s Fourth World work. And of course Hellboy.

Lee and Mike Allred’s BUG! miniseries, which I got for Christmas, is MASSIVELY underrated. The construction of that story, and how they play with the medium, is genius. Brett Lewis and John Paul Leon’s The Winter Men is the most tragically slept-on comic maybe of all time. I try to read that one at least once a year.

Emil Ferris and Sloane Leung have shown me what unbridled creativity can accomplish. Women cartoonists are leading the way in producing some of the most vital, poignant, creative work these days. They have been expanding the concept of what comics can be for some time.

Actually, a big influence on how I approach GJSWMLF is an article you, Travis, wrote about the first ten or twelve issues of the Fantastic Four, and how Lee and Kirby were trying to figure out their approach – was this a pure superhero story, a monster comic, a horror comic, a mystery comic, etc.? And they took the first several issues through a bunch of those ideas before they found their footing. You were pointing out how they took the different approaches in order to find what worked, but I’m trying to intentionally apply the different approaches over the first seven or eight issues at least, just so I can explore various generae. I think the GJSWMLF universe is expansive enough to accommodate a range of generae.

Hedge Coke: What can comics pros and comics fans do to make the field and fandom better?

LeNoir: I’ll say clearly: Comicsgate is a cancer in the industry. It is a reflection of our worst, unvarnished impulses. And when I say “our,” I mean the human tendency to take something that is meaningful to me, confine its value to my own experience of it, and make that the law for everyone else.

So I think it should be dealt with aggressively – rooted out. I’m really appreciative to people like Darryl Ayo and Renfamous for not giving CG any consideration, I just wish more people had recognized what it was early on. There were a lot of innocent people that got hurt before pros started speaking up.

In short, fans should loosen up their grip on what “should” happen. Unless they’re going to create it, they should invest a measure of trust and open-handedness in the creators, allow themselves to be surprised. Not everything is going to be your cup of tea, but you still have the stuff you like. That hasn’t gone away.

On the pro side, I think it would be helpful if everybody reached back a little more and asked, what makes this medium so special? How did the masters harness the medium? Reaching back to go forward is a useful approach. I’d like to see a greater resurgence of writer-artist works – again, I think women are dominating here and it’s revitalizing. When writers dominate, visuals can lose their freshness. When artists dominate, you get what happened when Image was formed – bombast with no substance. I’d like to see writers loosen up, and artists care more about mastering the craft.

Hedge Coke: What can we look forward to, from you, in the near future?

LeNoir: I’m planning on tabling at Heroes Con this year, and SPX if I get picked in the lottery.

I’ll do a small print run of the first volume of GJSWML, and maybe have some other prints and short comics, too.

Right now, while I’m writing the next arc of GJSWMLF, I’m working on a one-off short comic with my friends and excellent writers, The Stewart Brothers. It’s a convergence of so many things I love: it’s cosmic, it’s funny, it’s political. I can’t wait to put it out there – again, hopefully in time for Heroes Con in June!

The next arc of GJSWMLF is going to be pretty crazy, hopefully…! I’m thinking about doing 5-page installments that focus on different collections of characters, since they’re no longer centrally located, and dive deeper into genera conventions. We’ll see! 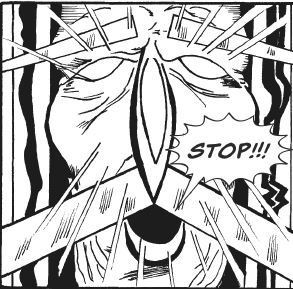 Close to the Marrow: An Interview With David Moses LeNoir