Crashing is a new series from IDW. It tells the story of Rose, a doctor, in a world where superheroes are real and treating them is illegal. Issue one has already come out, and it is amazing! I was lucky enough to get a chance to speak to Heather Antos, editor at IDW!

Comic Watch: Hello! Thanks for taking the time to talk with me!

Heather Antos: Happy to be here!

CW: So first, how do you explain your job and involvement with Crashing?

HA: Oh man, “how to explain my job” is a very daunting question. I think in the simplest of terms – and using sports metaphors since that’s all the rage – I tend to view editing comics as being Team Captain on the field with all the players. You’re in the trenches, but you’re also taking charge and helping plan the strategy while maintaining your own corner of the field. Despite the book’s namesake advising otherwise, CRASHING has been a relatively stress-free experience as far as comics-making goes. This is a team of pros all around who do a fabulous job at keeping deadlines, communicating, and just doing an all-around stellar job at their crafts. My focus has primarily been on fine-tuning the details with each of the creators to make sure every balloon, every panel, and every shadow is intentional and true to the characters and story we’re telling. It’s the best kind of comics experience!

CW: Rose Osler makes an amazing lead — she’s smart, powerful, and deeply flawed. How did you and Matthew work together to make sure she felt real?

HA: Again, full credit to Matthew here, making my job easy. He had a very clear vision from “go” on what he wanted this story to be. A lot of our work together on the story was an ongoing conversation within the text itself. My editorial style tends to be asking a lot of questions to get a better understanding of the writer’s intentions. “Does it make sense in this moment for a character to react a certain way given everything we know about them?” Those sorts of things. Rose has a very high stakes, high-pressured job mixed with a very, very dark past. And at times, she’s very, very selfish. Our goal wasn’t to tell a story about an idyllic hero. It was to tell the truth about the human experience – and the human experience is pretty damn messy. Matthew did such a great job with the extremely vulnerable moments we see in this story, and I hope they connect with folks. CW: When a comic, like Crashing, comes across your desk, do you get a sense of what’s going to be successful?

HA: I guess that ultimately depends on how you qualify “successful.” When I look at pitches, I’m not necessarily thinking, “oh man, I bet this will sell X number of copies,” because quite frankly…that’s not my job. I don’t want that job. What is my job is to assess “do I like it?” “is this the right creative team?”  “Does this story resonate?” and, of course “is it cool?” (CRASHING is cool, don’t you worry!). Matthew and Morgan put together a very smart pitch package where they essentially already completed the first half of issue 1 as a “proof of concept” for IDW. We knew right away that this comic was different.

CW: Have you ever worked with or met Matthew Klein before, or was this your first-time meeting and working together? I know you both have worked for Valiant in the past.

HA: CRASHING is the first comic Matthew and I have worked together on as far as the writer-editor dynamic goes, but Matthew and I first met several years ago when he was leading the sales and marketing team at Valiant Entertainment and I was working in editorial there. Matthew is an extremely intelligent and well-rounded creator in that he truly understands the industry from every level – as a fan, a retailer, a publisher, and a writer. He bleeds and breathes comics unlike anyone else I know, and I think it clearly shows in his writing. 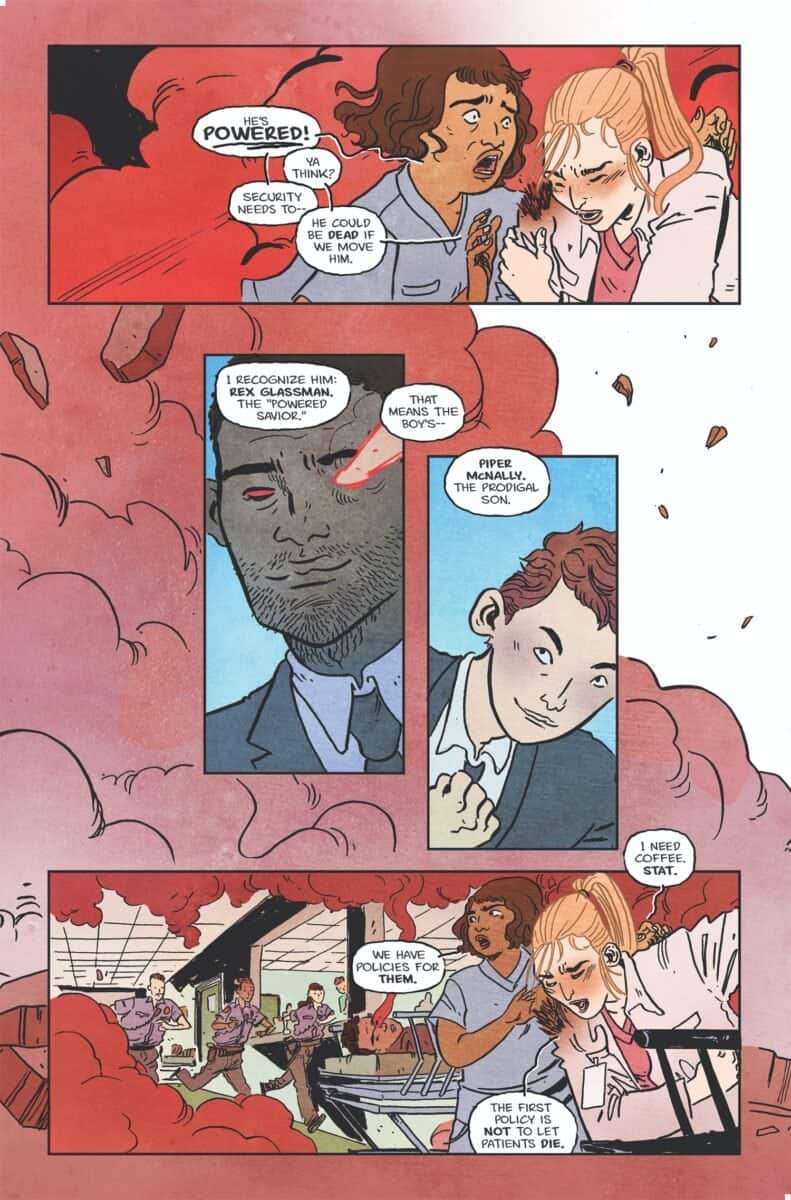 CW: To you, what makes Crashing so special?

HA: Despite being a story about a doctor who treats super-powered patients, it’s incredibly grounded and human. Rose isn’t perfect in this story – and neither are any of the other characters. They are all fully-realized individuals with their own stories going on – we just happen to be following Rose’s. And it’s real. In CRASHING, we witness firsthand how Rose must address her past mistakes as they’ve come to haunt her in the present with some pretty dire consequences simply because she was afraid to ask for help. I think that’s so relatable in so many ways. Asking for help, admitting our faults and failures…it’s a scary thing. Will Rose overcome that? Read it and find out.

CW: After reading issue one and talking to Matthew about it, I can say that this is one of the best comics this year. What can you tease reads about what’s coming for the amazing world of Crashing?

HA: Oh wow, thank you so much! We certainly are incredibly proud of this book, and I really think it has something to say. I can’t really think of another book quite like it – and certainly not one I’ve read in recent years. Issue #1 is just the tip of the iceberg…there’s a very bumpy road ahead for Rose, filled with trouble and betrayals of her own making. Who’s the hero of this story? Only time will tell. And it might not be who you think…

CW: Let’s talk about the amazing art! How wonderful is Morgan Beem? Was Morgan attached to the project from day one, or did you see their art and knew they were right?

HA: Not from day one, no. First, Matthew and I worked on developing the story and wanted to make sure we knew what it was before bringing an artist on board (and by “Matthew and I,” I mean Matthew did all of the hard work, and I read it, gave feedback, and talked through the problems with him). Morgan was Matthew’s doing – and holy shit, she is INCREDIBLE. I truly cannot envision another team working on CRASHING, honestly. Morgan’s storytelling and gritty characters hook you right into their world – her expressions and acting is so dynamic, and every issue, I am BLOWN away. And can we talk about her incredible covers? Then there’s Triona Farrell adding her magic touch with colors – almost mimicking the watercolor texture and style Morgan brings to her traditional pages – but with an added flair of some incredible visual motifs in blue. And last but certainly not least, Hassan Otsmane-Elhaou’s work on the letters only adds to the chaos of the ER. This team is FIRE at every level.

CW: What other IDW projects are you working on?

HA: You mean the ones I’m allowed to talk about? Fine. I’ll keep my secrets to myself! For now, that is…

When I’m NOT working on CRASHING and other amazing IDW Originals titles, I am in the near future, boldly going where no comics has gone before. In fact, we JUST sent to print IDW’S brand-new ongoing STAR TREK #1 – the flagship of a relaunch of the Trek line by Jackson Lanzing, Collin Kelly, Ramon Rosanas, Lee Loughridge, and Clayton Cowles. We also just kicked off the first-ever LOWER DECKS series by Ryan North and Chris Fenoglio based off of the hit Paramount Plus streaming show – it is bonkers in every way!

CW: Any final words about Crashing or your other IDW projects?

HA: I mean, I’m definitely biased, but I am so excited about what we’re doing with both the IDW Originals and Licensed comics lines here. CRASHING is only just the tip of the iceberg of Originals titles I’m working on…and with STAR TREK we’re only JUST getting started. But more on those announcements soon! 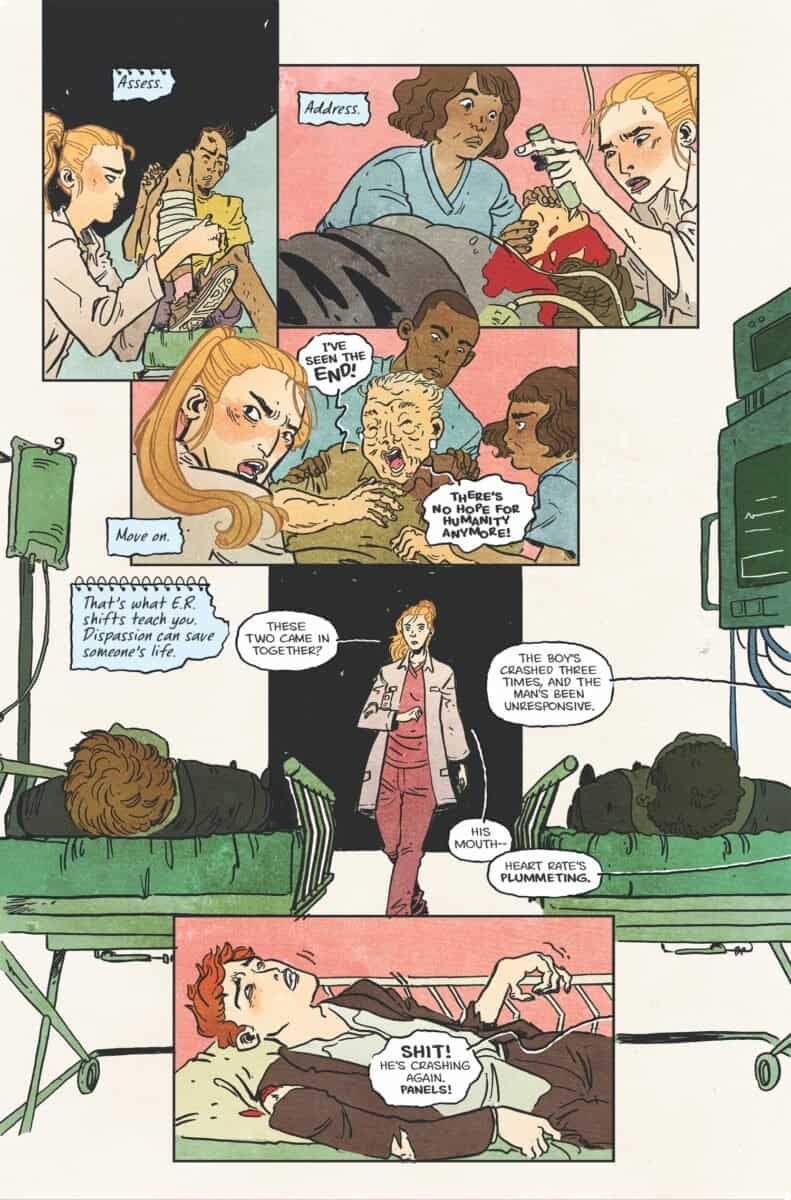 CW: Thank you so much for your time, and I’ve read books you’ve been attached to before. I just have to say everything you touch ends up golden! I’m looking forward to more comics stuff from you in the future!

HA: Awww, thank you so much! Nothing brings the same joy as telling good stories that connect with people. It’s my goal to have each issue I work on to be someone’s favorite issue. And I hope you (and the readers out there) have found a new favorite in CRASHING!

Crashing Issue One is out now! Make sure to pick it up and order issue 2 online or at your local comic book store. This series is something new, and I can’t wait for more!