on June 8, 2020
Mama Lips is a comic creator and musician who has been doing comic zines, DIY CDs, special edition comic diaries, and everything you can imagine in the most tender of formats for more than 10 years. You can follow them and read some comics at their Instagram, buy those comics and listen to their music in their Bandcamp and support them at their Patreon. They also co-run a spooky podcast called “Slice of Death”, available in all podcast platform and that you can follow at Facebook. We had the pleasure of chatting with them for a #CWPride themed interview in the latest days of May and here it’s the result. 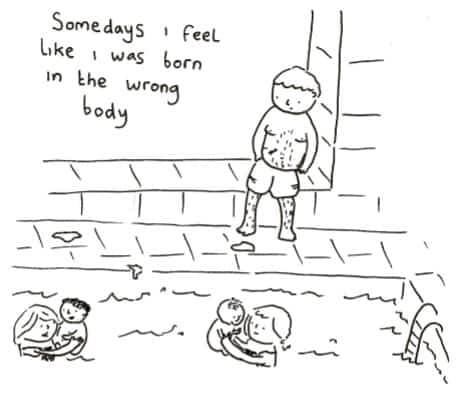 Comic Watch: Hi Mama! First of all, what projects are you working on lately? What’s on your desk?
Mama Lips: I set myself a goal of finishing 2 comics and 2 albums this year and I think they will all be finished before the end of Summer. The 2 comics are Wonder and True Crime Junkie. One of the albums just came out actually and the second one is almost complete. It’s been a productive time!
CW: A lot of your comics are autobiographical or telling your routine, daily life, experiences, like Peanut Butter & Jelly Sandwich or An Honest Life. How do you feel that tells your experience and for other people to relate to it, both as a non binary person, a parent, someone in a queer relationship…?
ML: I never really think about the audience when I make stuff, or how people will perceive me from my work. Unless I am making something focused on those issues like Transgender Step-Parent. I think my work is less focused on been nonbinary or queer and more about the day to day of my life, especially when I’m doing diary comics. I guess I don’t want to be thought of as a “Queer Cartoonist” or a “Nonbinary Singer”, I just want to be thought of as a “Cartoonist/Singer”. I just want to be a good writer more than anything.
CW: On the singer/multifaceted part of your work, how do you relate your work on comics, music, and podcasts? How different or similar are your artistic processes for the three?
ML: Even after doing most of these things for 10 years, I still don’t really have a method. They all have different challenges and bring me joy in different ways. With comics, I usually let ideas float around in my head for some time before committing any ideas to paper, but even that gets added to a long list of ideas that I’ll probably never finish. With music, I used to try and finish a song in an hour or so but now I let the demo stay there for a while and think on it more, how to let it adapt and grow into something else. On my song “Lightning in a Bottle” that originally was just a 0:55 second song and I was going to put it out as that, but after giving it a lot of time to develop, it turned into a 4:00 minute track. So, I’ve definitely seen the benefits of taking my time more with ideas and making them something better. The podcast is probably the most different method because with that I get to go out and research stories I want to tell. I do focus a lot on queer cases with Slice Of Death. That’s always a lot of fun to do with Elliott!
CW: I think a common theme in your comics and a lot of your songs (I think Reasons to Live stands out for me) is a general intention to care for others and share things about yourself, your mental health, the hard and the good experiences of both you and your trans friends and loved ones, etc., that gets to my heart. What do you expect those inspire in your readers and listeners?
ML: Usually a friend will tell me that a certain song made them cry and it’s their favourite song. I guess that means I’ve done something right, to bring an emotion to the surface. A lot of my own songs make me cry. I think I am just a big softie who wears their heart on their sleeve so whatever I do usually has an honest and sadder tone, especially with my songs. I’ve never really thought about the bigger picture of what I want my songs or art to convey to someone but I guess overall I am always trying to bring up themes that we are not alone with our weird, sad thoughts and we can survive whatever trauma life has thrown at us. 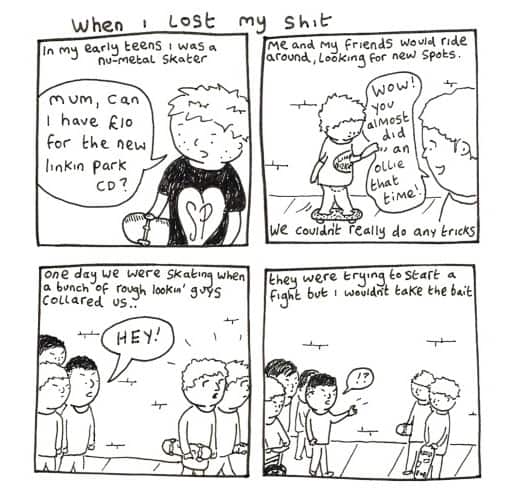 CW: You recently released the comic Wonder and your album You Haven’t Left Us, I Can Still Hear You, that both touch on the theme of grief. What can you tell us about those two?
ML: Those are both about my friend Sam, who passed away last year. When it happened, I just started writing songs for myself as a way to process the pain. I really did not plan on releasing any of it. As I got more into it, I realised that this could be an album and a way to at least help give myself some sort of closure with the grief. I wanted to pay tribute to a wonderful person. The comic, Wonder, was another thing I was planning on writing before Sam passed away. I was planning on writing a comic basically for him. When he was in the hospital, he said reading my comics really helped make him feel calm. Now that comic is finished but a lot of it is about processing the loss of Sam. My plan for 2020 is really to devote the whole year to Sam is some way or other.
CW: Now I know that you also work in a comic shop, and I wanna ask what comics by LGBT+ authors would you recommend to someone exploring their identity?
ML: Just So You Know by Joey Alison Sayers are great trans comics. They’re out of print now but possibly still available on her website digitally. Simon Hanselmann writes dark sitcom comics with queer themes. Fantagraphics put out a book a few years ago all about gay manga artists called Massive which is great. Black Lodge Press focuses on queer comics. That’s just a few that come to mind. Oh, and of course Alison Bechdel’s Dykes To Watch Out For is a must!
CW: Lastly, thank you very much for the interview! And since we’re doing it for Pride, how do you feel about Pride digitally happening this year?
ML: Thank you! I’ve only gone to Pride once and that was last year. It’s not really my thing but I know it means so much to some many LGBTQIA+ folks. There are parts of it that have been lost or overtaken by businesses which makes me pretty angry about the whole thing, and then I wonder overall, what’s more important – A day to celebrate queer people but with companies using it to make money, or a day that gives so many people joy and hope. Maybe it’s somewhere in the middle.