COMMENTARY: The Queer Journey of Robin’s “Sum of Our Parts,” And Why It Matters

In the final pages of “Sum of Our Parts,” a story in the anthology series Batman: Urban Legends, a classic character is shown to be on the journey to discover pieces of himself that he had previously ignored. Tim Drake doesn’t come out of the closet with set concrete words. He doesn’t make an announcement. He doesn’t decide on a label. In truth, he doesn’t even find any definitive answers for himself. What he does is realize that there is more for him to know.

The three installments of “Sum of Our Parts” are not a straight shot to Tim’s discovery, but neither is it something that came out of the blue in the context of the story. (Or in the context of his publication history.) In Urban Legends #4, Tim is already shown as being out of sorts. He is scrounging to find his identity. The very first words on the page are Oracle questioning who he is at this time. Red Robin? Robin? Drake? He’s called out for not having a direction and being afraid to analyze himself. While none of this is blatantly queer, it is something many LGBTQ+ people can recognize. 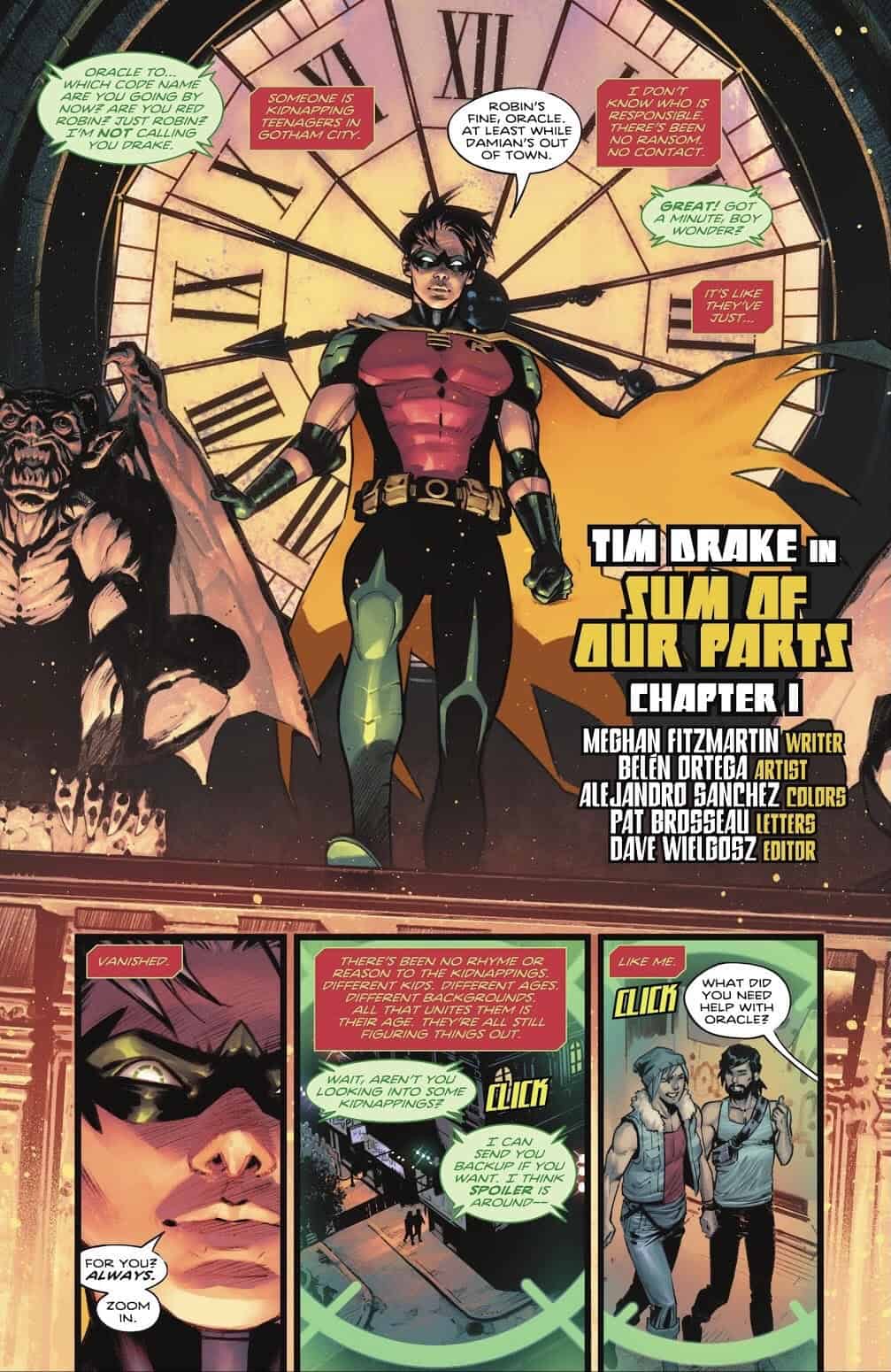 Between this queer subtext and the way Tim constantly cuts off his own thoughts when meeting with Bernard, it provided enough of a bait to give hope to readers who were looking for this kind of front-line representation. The corners of social media I have come to inhabit were full of excitement and no small amount of concern. Queer-baiting has never been uncommon in comics, and it has been proven time and again that there is no amount of queer-coding or implication that can’t be quickly and efficiently swept under the rug.

Urban Legends #5 offers us an alternative to Tim’s soul searching. The conflict of dual identity that has plagued most heroes throughout the history of comic books. He is Robin. He is Tim Drake. What does that mean? What does he want? What does he need? But like most heroes, he doesn’t have time for answers because bad guys need punching. 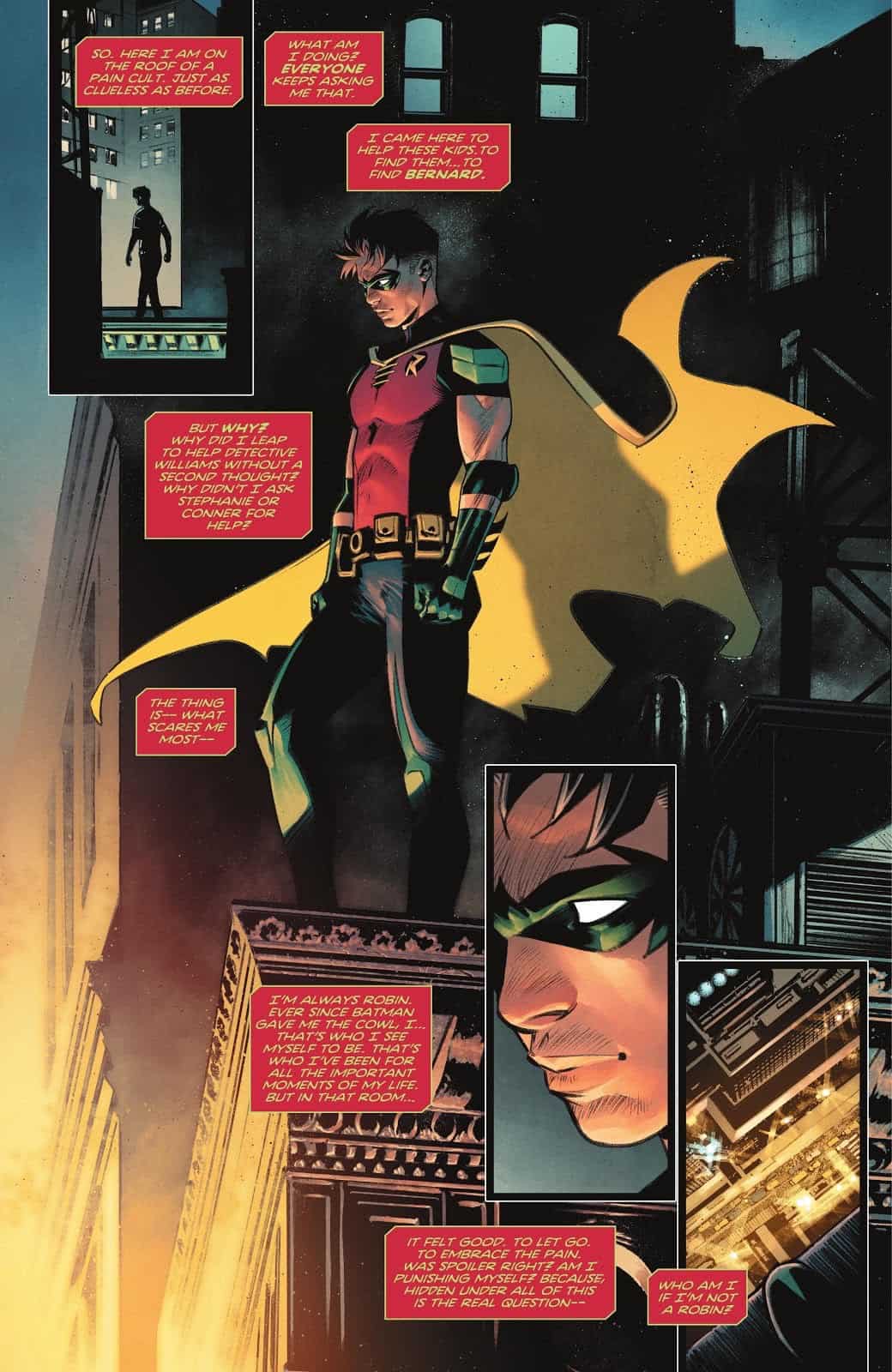 The first page of Tim’s story in Urban Legends #6 doubles down on this explanation of Tim’s identity crisis. He centers his actions around Batman. He constantly asks himself, “What would Batman do?”, fueling his identity into his partnership with him. A perfectly valid and heterosexual conflict for a sidekick to have. As if decentering focus and identity isn’t an old page from many LGBTQ+ people’s denial handbook.

It is Bernard who breaks through his façade. It is his hand that Tim can’t help but think is warm. His challenge about Robin acting too much like Batman that breaks his strategy. Bernard’s refusal to let Robin fight alone succeeds where his oldest allies, ex-girlfriend, and best friend could not. But, most importantly, it is Bernard’s self-assurance in his own identity that gives Tim the confidence to see in himself what he has been avoiding for the duration of this story and beyond. For the first time, he sees what he wants, what he needs, and a glimpse of who he is. 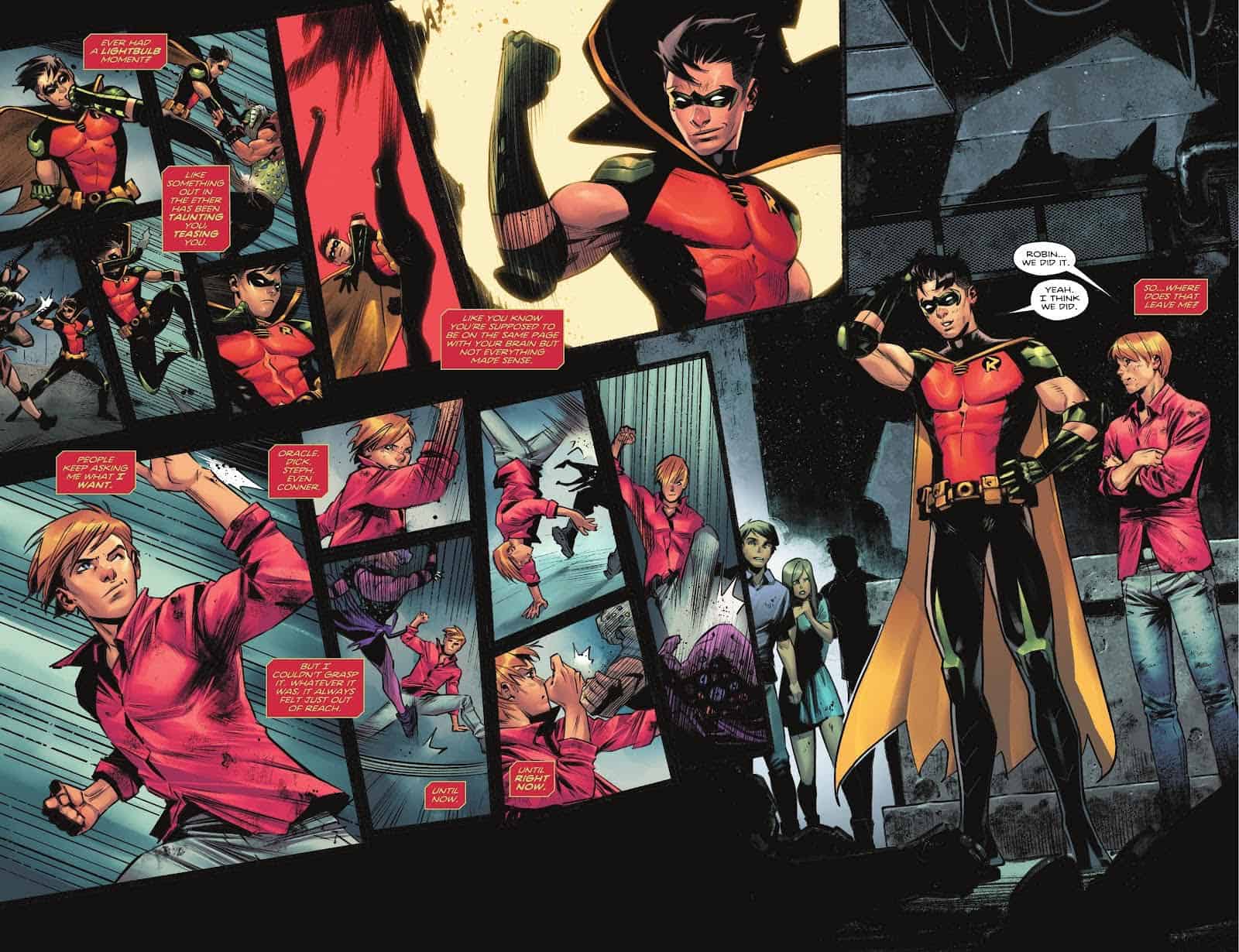 Writer Meghan Fitzmartin, artist Belen Ortega, colorist Alejandro Sanchez, and letterer Pat Brosseau have delivered a coming out story that was nuanced, layered, and deliberately incomplete. Nothing was tied up in an artificial bow that would have done a disservice to the story or Tim’s journey. It’s a story that, for myself and many others, felt real. My corner of social media exploded with people celebrating the issue and Tim’s journey. While many have claimed Tim as bisexual, and I will not fight their personal reading of the story, Tim has not reached the place on his journey where he finds a label. He says himself that he cannot find the words and that in and of itself is a recognizable piece of many LGBTQ+ people’s journey.

The final piece of this story that should not be set aside is whose story it is. This is not just a story about a young man finally seeing something in himself that had been hidden. It isn’t just a coming out that is clear, on panel, and delivered in a way that would be difficult, if not impossible, for future writers to backpedal away from. (Though that is a very important part of it.) It isn’t even just a story about Tim Drake, a persistent, beloved, and consistent character in the DC comic franchise since 1989. In the first pages of this story, Oracle asked Tim what codename he was using. He answered Robin. Throughout the course of the story, despite all Tim’s identity doubt, he was Robin. This was not a story of Red Robin or Drake coming out. It was a story about Robin coming out. An identity, a DC brand, that has been around almost as long as DC Comics (or technically, National in the beginning) itself. Yes, Tim may not always be the person behind the mask that everyone thinks of. And he may not be the person behind the mask in a decade, or a year, or even a month. But Robin is a property that people know.

For today at least, that property is no longer straight.

And that is a very big deal.

COMMENTARY: The Queer Journey of Robin's "Sum of Our Parts," And Why It Matters