Dis-Ease of Language: 20 Years of League of Extraordinary Gentlemen 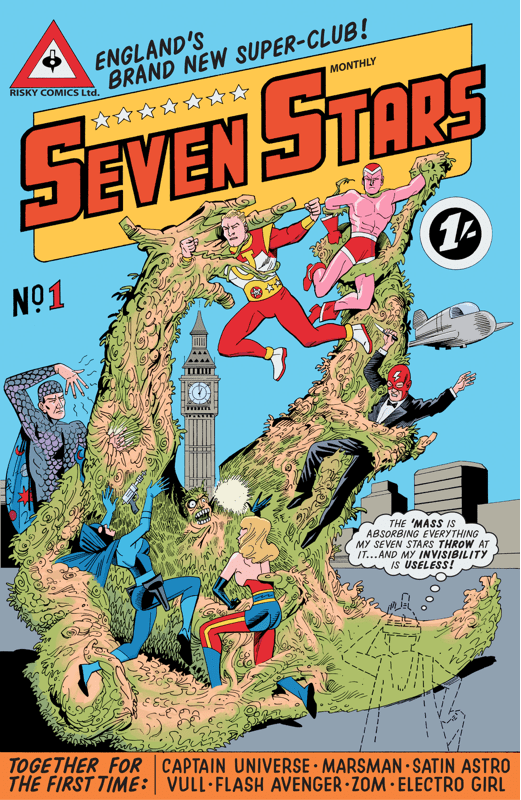 Alan Moore and Kevin O’Neill are about to stop making a superhero comic! Or, are they making a comic which has, in it, superheroes?

The final volume of The League of Extraordinary Gentlemen, the last issue of which is soon to arrive any time yet, as of this writing, was to be the retirement of both men, from making comics. I believe, since the earliest issues arrived, they have each stepped back from this, though specifically for charity offerings.

It is weird to see anyone voluntarily leaving comics, if they have been involved for more than few years. I should not be judgmental; I appreciate being in the comics audience considerably more than I want to make comics. And, I lack the fortress that is either, Moore’s or O’Neill’s body of work, to buttress that stepping back. They have made their bones. Paid any dues. Been there, done that, got pilloried for taking a risk or being obtusely racist.

Doing comics will get you beat up. 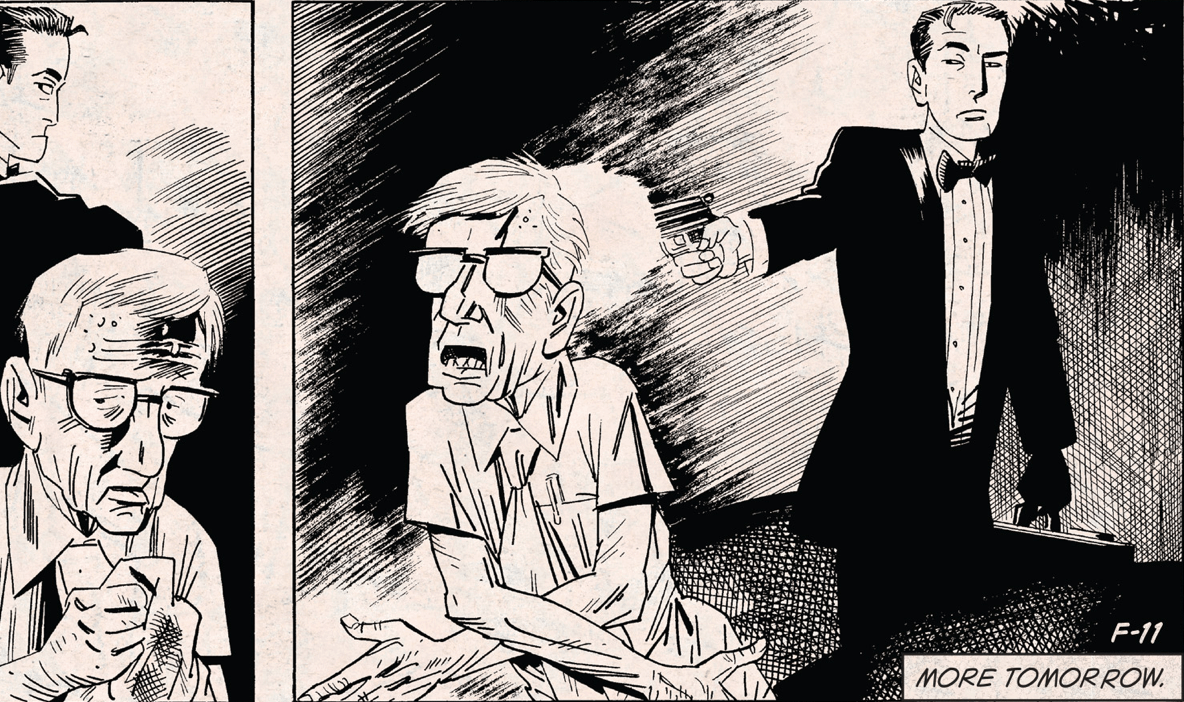 Often, the comics audience does not like to believe their comics are constructed, at least not piecemeal by human beings. This generates the still-frequent offense of Who does Alan Moore think he is, not writing Green Lantern any more? It is also evidenced in the  aggression that can be found lobbed at realities, like The League of Extraordinary Gentlemen was not originally intended to be a reference-heavy, bird-watching-for-fictional-characters comic that spanned the breadth of anglocentric libraries. League was, initially, to be a one off miniseries turning out a 19th Century Justice League with non-American, non-superheroes, with their literary or spiritual predecessors in fantastic fiction done as superheroes. “The sole idea we’d started out with was that a Victorian super-hero team of previously existing characters might be something fun to work on.” as Moore puts it. A gag book that would have had a very different aesthetic, as evidenced by early art for the project, by Adam Hughes.

League, also, was not particularly reference-embedded until fans dug deep for the references that were there, particularly the amazing and amazing-at-crowdsourcing, Jess Nevins. “It was probably during the Rue Morgue sequences of the first issue,” says Moore in his introduction to Nevin’s Heroes & Monsters, “that it started to dawn on us… how compendious and far reaching we might be in our reference.” He goes on, “I realised if we had some clearly gifted and dedicated person like Jess tracking down all of the references for the readers, then we could be as obscure and far-reaching as we wanted, safe in the knowledge that everyone, if they wanted to, would be able to “get it” and enjoy all the rich texture that the League’s world has to offer.”

The single page advertisement for the initial volume of League, is up there with its contemporary WildStorm title, Planetary’s, for being vague. But, when it was done up, what did they know, really? 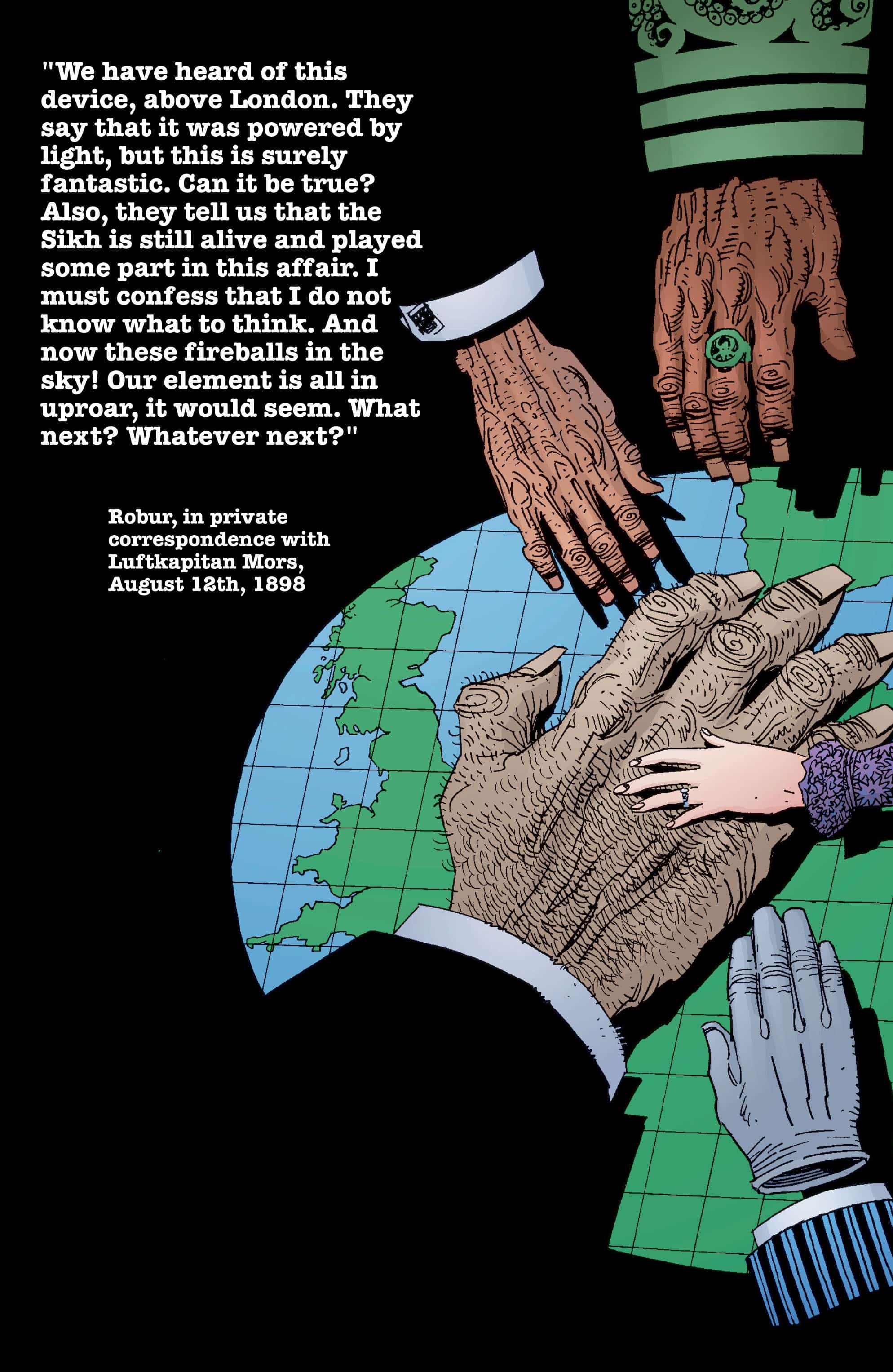 Every successive entry into the series, has altered what the entire series is, what it is about, and what it can be. Moore and O’Neill have built up League, issue by issue, volume after volume. As constructed, and as piecemeal as a comic can be.

Superheroes have largely been kept to the marginalia, as the early League volumes covered 19th Century British literature and literature and fictions that fed that 19th Century British fare. What superheroes were present by the time it opened up both globally and to involve the 20th and 21st centuries’ fictions, were primarily chosen not for popularity or prominence, but novelty. The mad fringe stuff. The parochial hoke and nostalgia bid of homegrown, much-forgotten British superheroes, as well, with most of the play centering around the 1960s issues of volume three, Century.

This final volume, The Tempest, more than half of each issue, in general, thick and steady with superheroes and the worlds from which they originally hail. The Legion of Super-Heroes, themselves, show up just off-panel or via their iconic headquarters, in issue one of the new volume. Mina, a supporting character from Dracula, who has been our through-line in this sequence of two decades of periodic serials, has her time as an invisible superhero pushed to the front. It may even be worth noting that, as Mina was tortured and lost friends to the insane and insanely violent Invisible Man, of the H.G. Wells’ novel, her becoming also an invisible person, disguised as a man, adds a layer or two superheroic détournement to her presentation by and in The Tempest.

Every few pages, unlike the initial two volumes of League, The Tempest, will change styles and pacing, mimicking a variety of sources and giving each issue a scrapbook sensibility. In the foreword of each issue, while extolling a real life comics creator who has been largely unsung despite their great contributions, Moore and O’Neill have also adopted layers of farcical pretense.

“It’s your madcap masters of ceremonies Al and Kev here, pretending to be two frankly baffled editorial employees working for British juvenile weeklies in the 1960s, who are themselves pretending to be unlikely English versions of Stan Lee and Jack Kirby for reasons they don’t entirely understand” (A League LOOK-AND-LAMENT Feature: CHEATED CHAMPIONS OF YOUR CHILDHOOD). 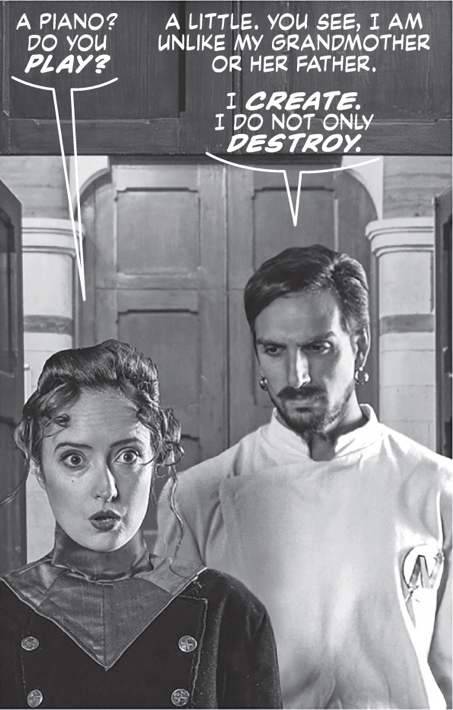 This is an artifice. This is two masters hopefully still having fun, but undoubtedly showing off. If the last issue is not the equivalent of Moore and O’Neill doing handstands on the seats of a tandem bike jumping six sharks in a small pool at the bottom of a steep cliff they are leaping, I will lie and say I ate my hat.

The whole of the League, as comics and concept, might be better off if we knew nothing of its authors’ intentions or, more to the point, their responses to critics or questioners about their intentions or the effects their work has in this world. 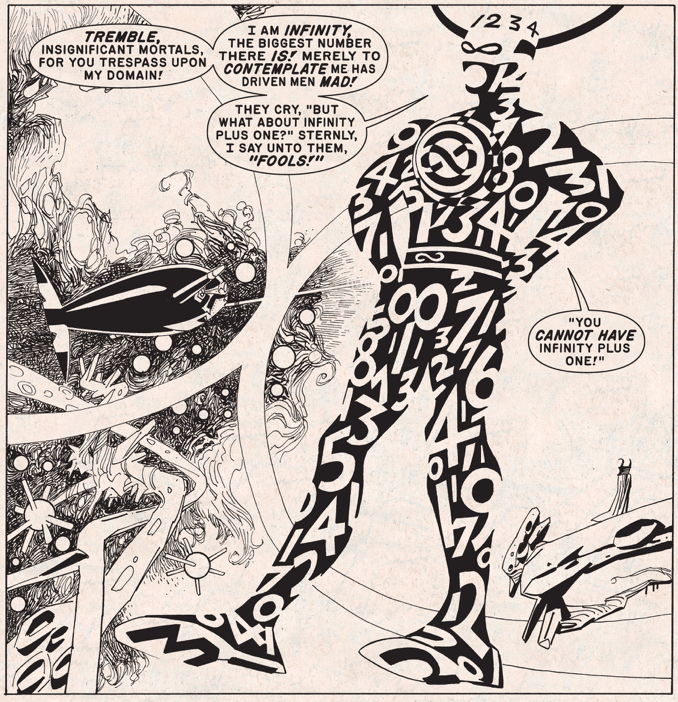 An extraordinarily beautiful comic about shallow, petty people and shallow, reflexive fictions, The Tempest presents two primary threats before its protagonists and its audience: that the supreme heights fictional characters can achieve might still our human agency by making us look inadequate by impossible comparison, and that our nostalgia makes it impossible for us to move past our early encounters with fiction. These are the real threats. The atomic weapons and magic swords are only tools to bring these psychological concerns to form. To acute form.

A world overrun with superheroes is treated as a nightmare, which will set off some superhero fans, but a world overrun with giants, thick with faeries, overpopulated by narrating horror hosts and elder gods and horse-headed politicos or espionage agents who undergo a thousand adventures in ten years are all treated as dystopian. They are dystopian.

I am surprised that this final volume of League does not in its first pages accept that all these other genres, fields, and elements are all simultaneously and consistently available to us, but I am also unsurprised, because that would end the story. We know that. We can know that. The people in the story should not, or they would not get anywhere.

It is a form of nostalgia that makes us want fictional characters to stop repeating violent dynamics, to want characters to suffer no more threats, to labor no longer under false ideas or via their skewed perspectives. Maybe nostalgia does rob us of initiative.

I do not believe there is too much hate in League or in this volume, in particular, but there is the pretense of hatred. The narrative and characterization is harsh on some characters, kind to others, just as any story needs, but since they are almost all borrowed characters, repurposing them specifically for the needs of The Tempest enhances the harshness and inflicts it, more deliberately, on us, the readers and the non-readers who are, regardless, paying attention.

O’Neill and Moore both know there are audiences beyond the reading audience. There is a speculating audience, guessing at plot and arc from website reviews or shop gossip. There are audiences who follow as they can the personalities and personal lives of the authors. There are audiences who will not read but will dissect words and pictures gleaned from the comics. I think The Tempest is constructed for all of those audiences, and also the audiences of the various elements pilfered for this comic, the Lovecraft entities, the tv show protagonists, the cereal mascots and stalwarts of classic literature.

Just as we are seeing with reviews and commentary on All is True, the relatively untrue story of William Shakespeare’s later life directed by Kenneth Branagh, or the enraged lightning in a pill bottle responses to Ken Russell’s Gothic by shortsighted academics and armchair academicians thirty years ago, there are people right now, only checking in at all on this story to see how O’Neill and Moore are treating Shakespeare, abstracted from the story, or Jason King, Jerry Cornelius, characters from Absolutely Fabulous or Dogtanian.

The Tempest, more even than earlier League comics, engages in gotcha scenes that are not what they appear at first sight, including the murder of beloved by someone characters. A smart way to go out, if the two principal creators did retire after this, but also a great way to stretch the bounds, again, of fiction within fiction and what can be done with appropriated characters from other people’s works.

Moore dips into conflating homosexuality with pederasty/korephelia in what also turns out to be the funniest joke in the five out of six issues published so far. Like the caricatures of black people that flourish where genuine black human beings, even those borrowed from other works, are entirely missing, this sexual misunderstanding gag would play better if we did not have Alan Moore’s body of work, or even earlier volumes of League. If we did not have Moore, or O’Neill defending themselves, often weakly, against criticism of their self-admittedly indulgent and sometimes knowingly offensive or problematic use of sex and race in the material.

We do know them, though. We know what they have let us know of them. What they have given us in interviews, statements, their comics and other works. It is implausible to claim we cannot anticipate the directions this comic will take, the approach it will have to race, to sexuality, to gender or British/American pop and political dynamics. I may not know how the comic will end, and I suspect I will not grasp the ending as much, day of release, as I will five, ten years after. 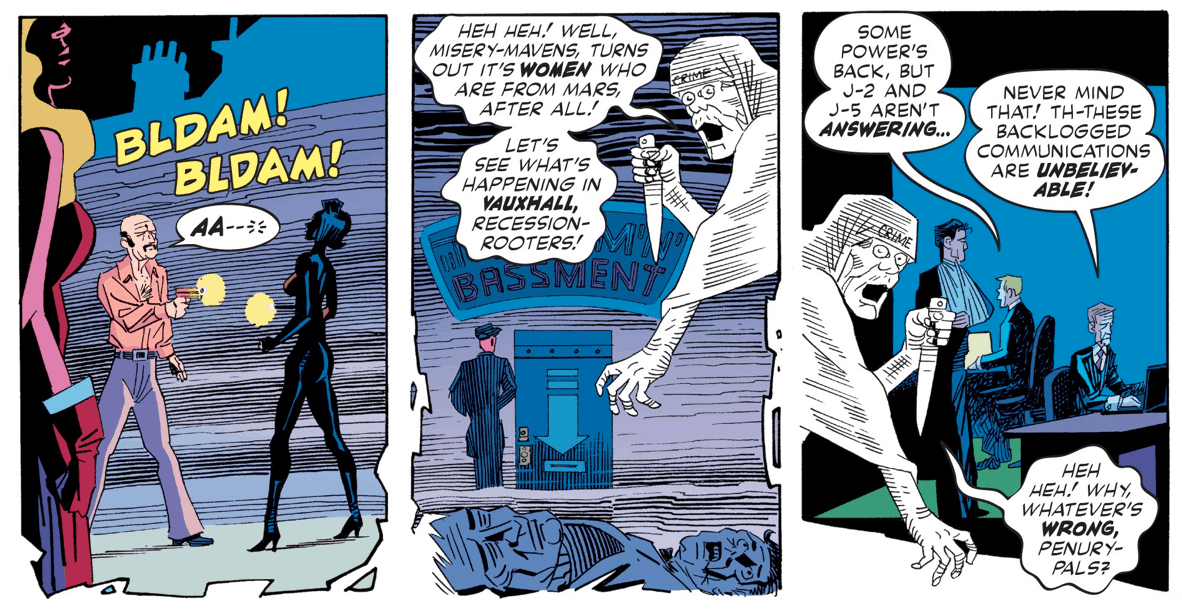 As with the standard defense of rape in an Alan Moore comic, a) it is in a lot of fiction, b) it exists in life, and c) at this point, isn’t it, fairly or unfairly synonymous?

Said Alan Moore, of the original volume of The League of Extraordinary Gentlemen, “[P]eople could accuse me of wallowing in those elements under the guise of postmodernism and they’d probably be right” (Nevins’ book, Heroes & Monsters).

Quote Kevin O’Neill, about this final volume, talking with the New York Times: “We’re having a ball with it. I’ve never heard Alan happier.”

Dis-Ease of Language: 20 Years of League of Extraordinary Gentlemen