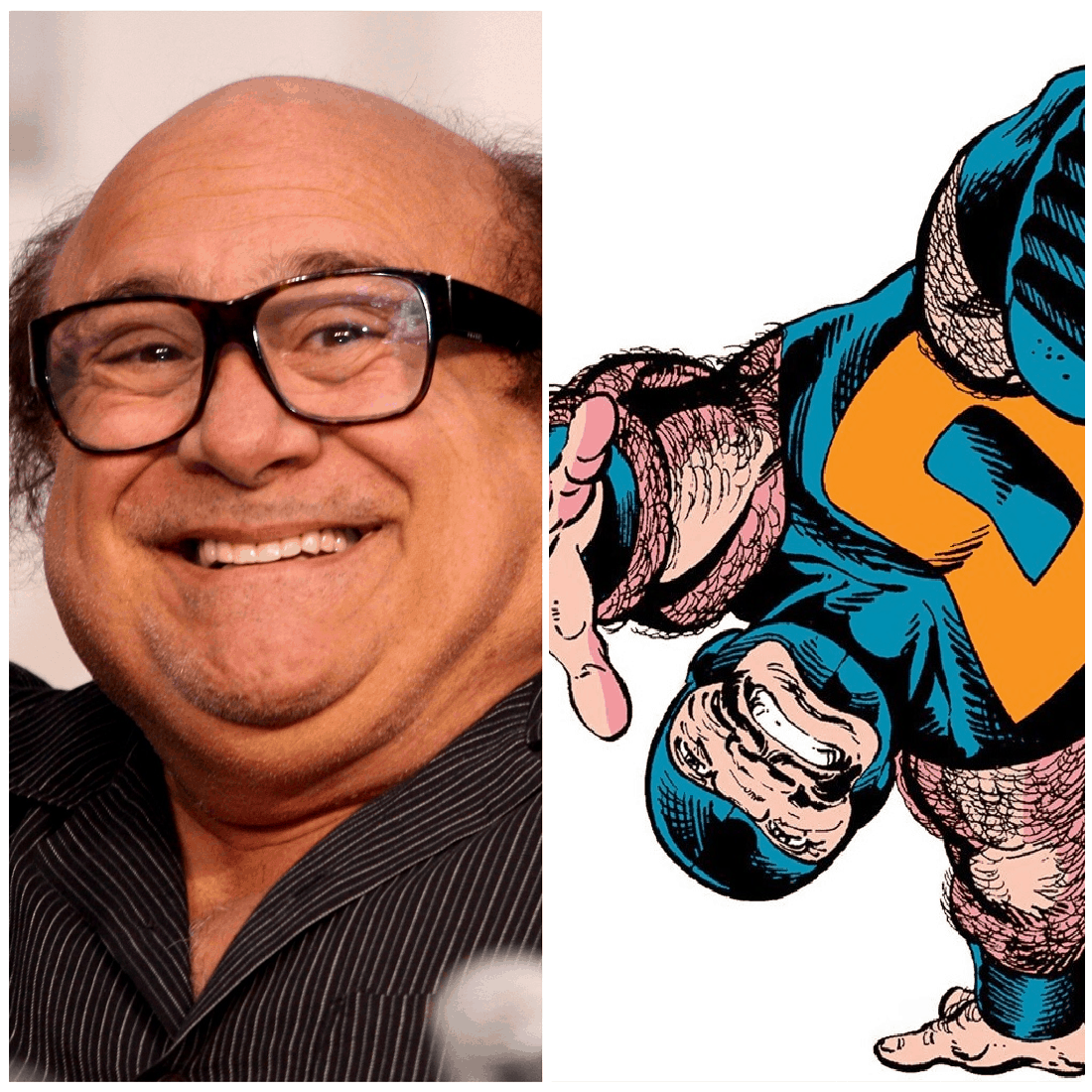 The idea that sparked this whole list! Who better to portray the feisty Eugene? Puck needs someone who’s surly, short and still means business. The genius to this casting is not only will people jump on it for the LOLZ DAT GUY FROM ALWAYS SUNNY but people tend to forget that aside from being a comedic juggernaut…Danny DeVito is a legitimately amazing actor. Bait in for laughs, switch on the deep character drama of the tragic plight of Puck (who’s actually a normal sized man but his dwarfism is caused by his body being deformed by a powerful demonic entity trapped in him like a flesh prison…betcha didn’t know that huh?) 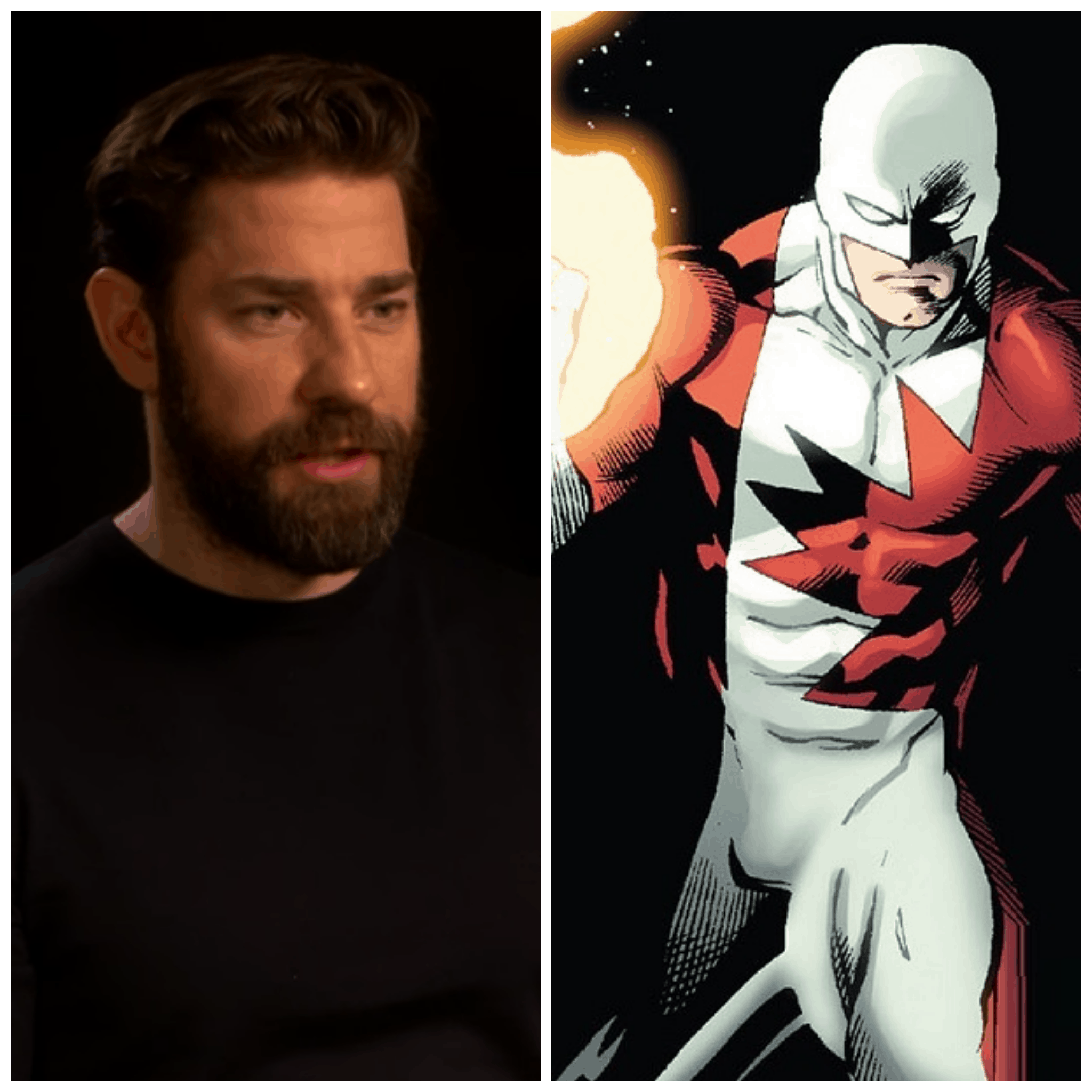 John Krasinski/Guardian
Ever since shopped images of the Office’s leading man appeared as Mr.Fantastic I think the entire internet can agree we wanna see Krasinski as a superhero, just a matter of who. I think he would be perfect for Dr.James Hudson, he’s got the look to be a leading man but also believable as a uber nerd scientist as well as having the comedic chops for perfect mid-battle quipping. What more do you need to freshen up Guardian who tends to come off a bit “stuffy” when in reality he’s just a slightly smarter but still every man kinda character, grounded in realism in a world full of ridiculous crazy. 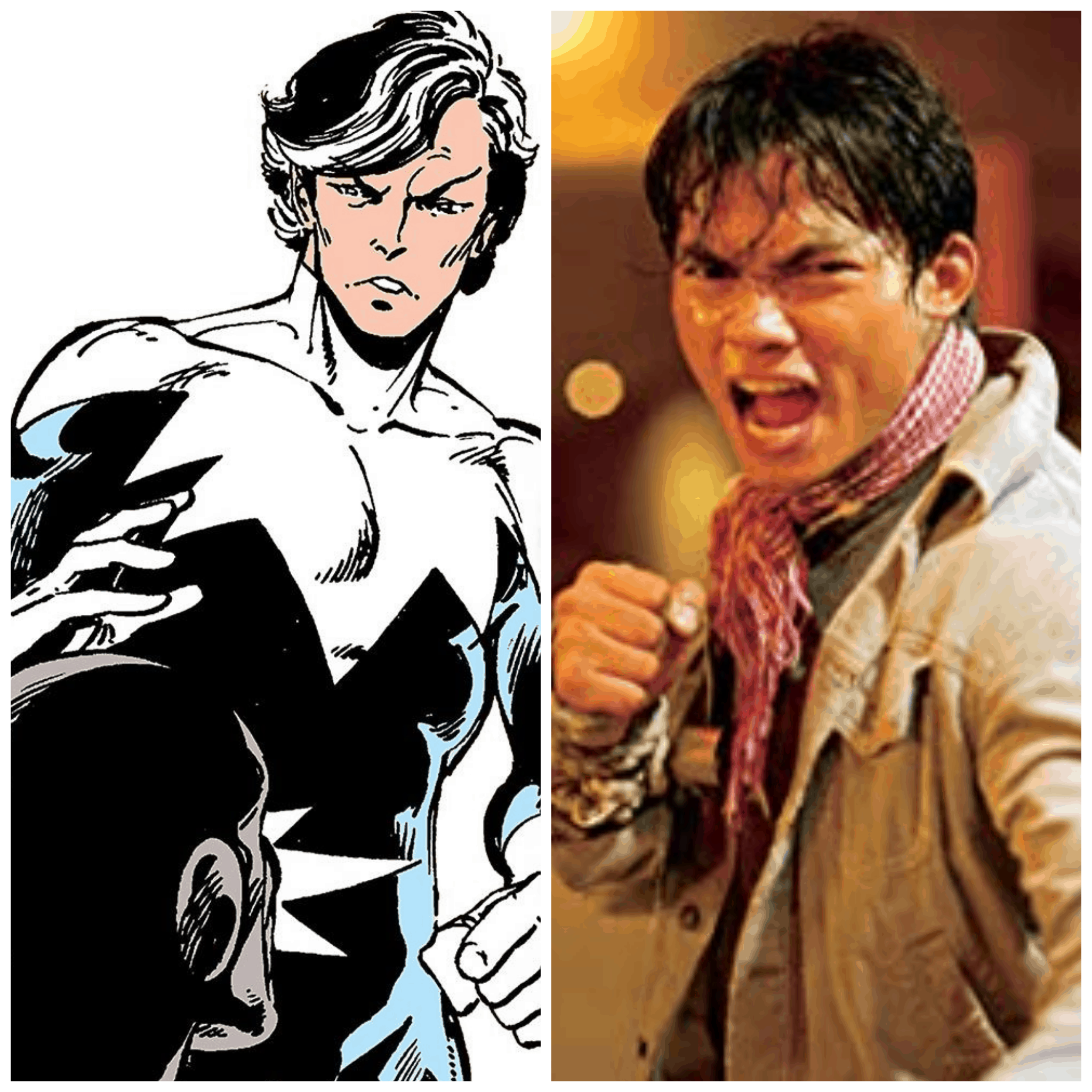 Tony Jaa/Northstar
This one took some thought when casting Northstar and Aurora you have to pick actors who complement each other and would be believable as siblings. Where Morena Baccarin shines as the Hollywood veteran of the pair, Jaa is the action star muscle. Not to mention him being a non-American actor who’s basically spent his career trying to adapt to Western audiences and make his mark as more than just “That one dude from Ong Bak”, well I imagine he can relate to Northstar’s frustrations with his teammates, the world’s perception of mutants, dealing with Americans, etc. Plus he does bring a serious amount of killer action star to Northstar and what’s the point of having a speedster if he’s not doing adrenaline induced things? Jaa can pull most of that on his own without too much in the way of stunt doubles and CGI no way one should undervalue that. 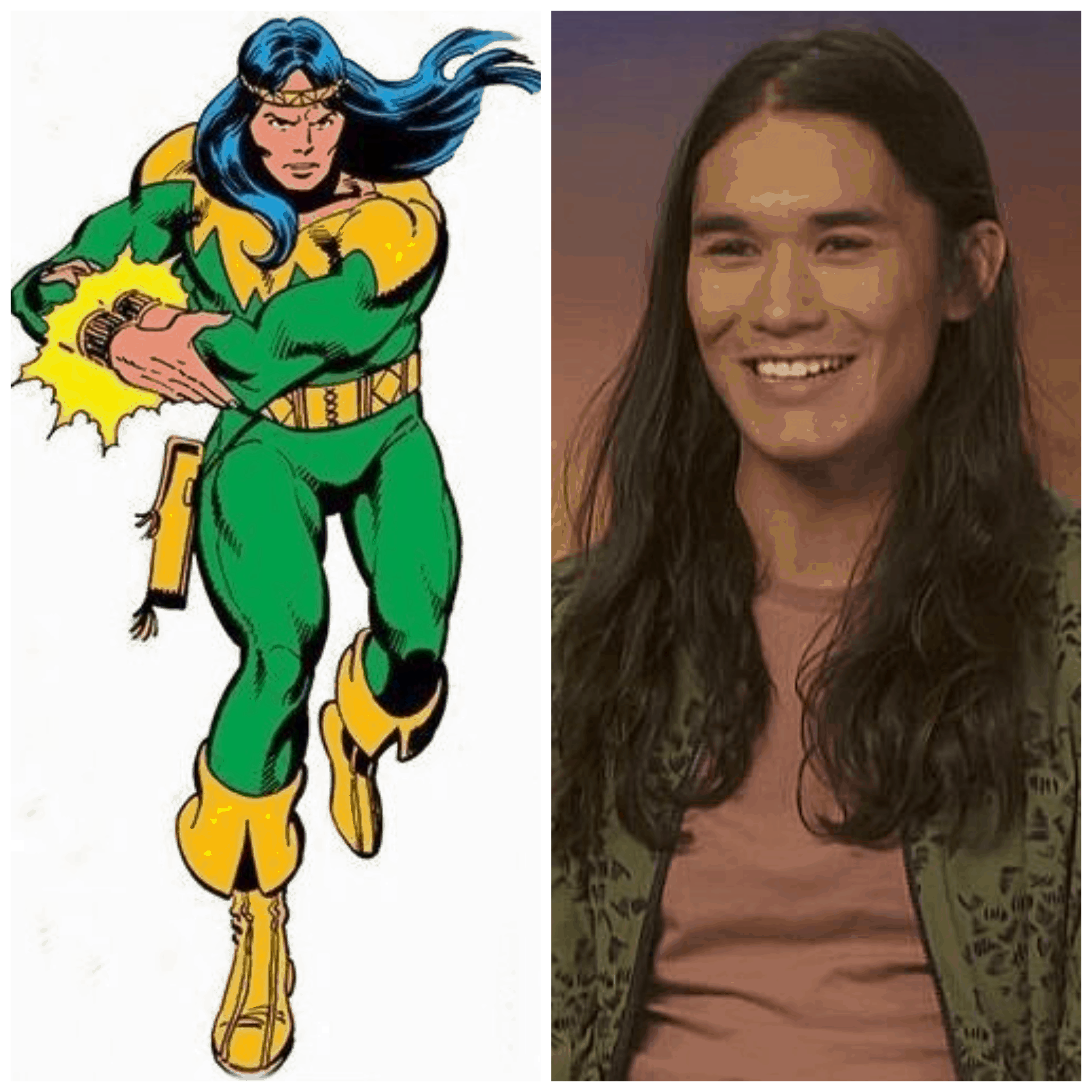 Boo Boo Stewart/Shaman
While his role as Warpath was somewhat limited in Days of Future Past, we’ve seen enough between that and not being a reason to hate Twilight to see that the young man has promise. MCU films and comic adaptations, in general, are gonna have to change things, so when it came to casting this movie I thought to myself…who would be the most interesting POV character? Michael Twoyoungmen by far. Not only that but what if we got something a little different from the stereotypical “wise old Indian” and instead got a version who while still formidable, wise and stern…was also still somewhat young and had much to learn about dealing with modern society? It makes for an interesting dynamic as well with our next casting….. 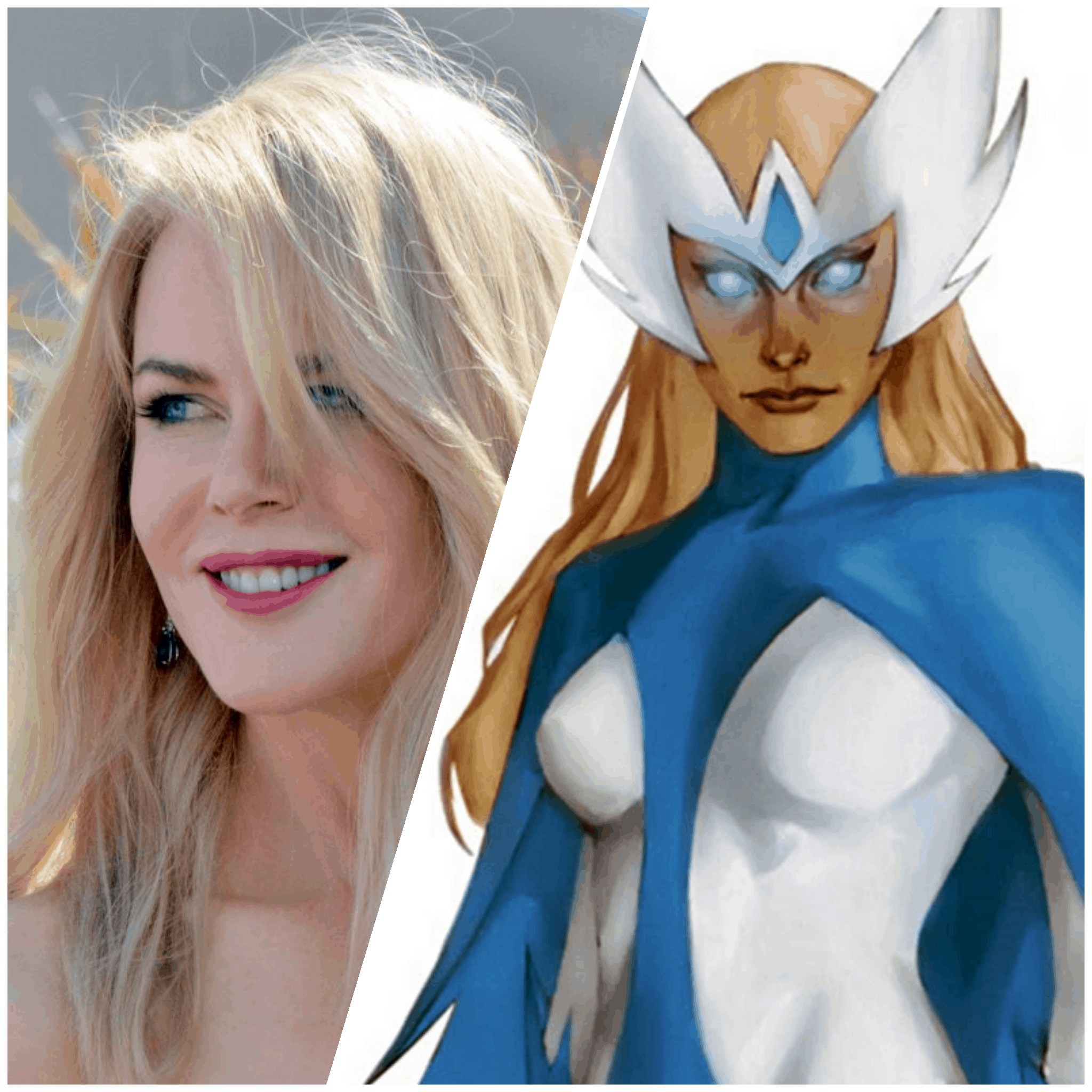 Nicole Kidman/Snowbird
So as with Shaman, this one is a bit of a toss-up. Traditionally Shaman is the aged sage and Snowbird and the rest are more “noob” ish. In all the years I’ve read Alpha Flight this is one thing that was always…off-kilter to me. Yeah, Snowbird has her equally sage like moments but she’s also been bounced back and forth from a straight up beast to X-Men TAS Jean Grey level whack. Making her an elder statesman of the team is just a good idea here, not only would it allow for amazing casting (cuz let’s be real Kidman in Aquaman was ridiculously great) but it would also allow her to be naturally inclined with her powers, of which she has the most potential for visually aesthetic. A battle hardened, ancient goddess in human form would be a perfect “lore character” to guide Shaman on his quest to be the snowy version of the Sorcerer Supreme as well as be the one with incite for the villain(s) such as the Great Beasts who are integral to the franchise. 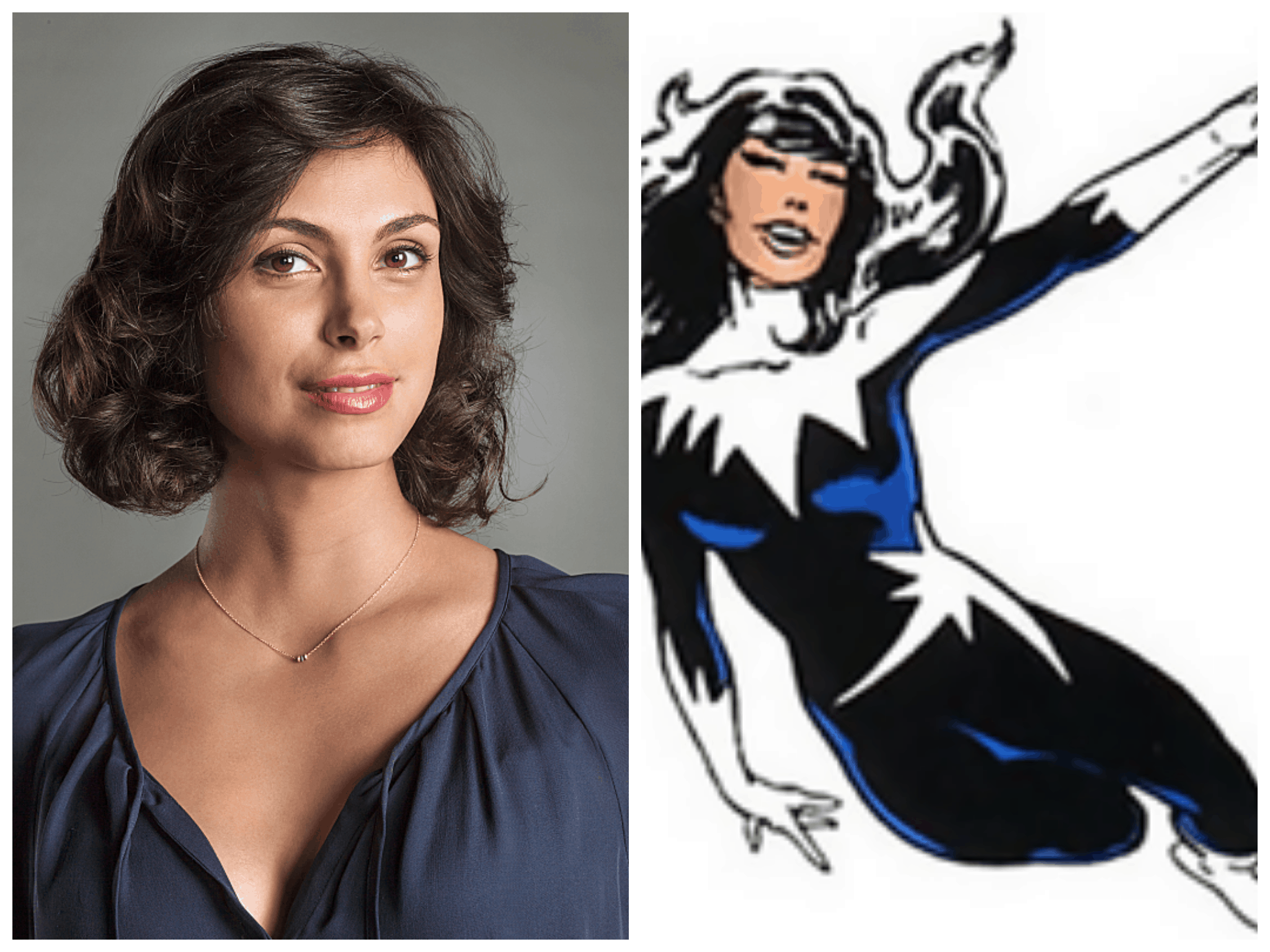 Morena Baccarin/Aurora
No stranger to comic material this vixen brings both the experience, the sex appeal and the flexibility needed for a character as complex as Aurora. We don’t need a full on “peep how crazy Jean-Marie is!” expose’ in the first film but I do believe she has the ability to wear all the hats necessary to make a killer Aurora. Her sultry appeal would pair excellently with Tony Jaa’s Northstar allowing him to focus on being the hot-headed French Canadian he was in the early days while she has the charisma to carry the pair as endearing twins. Plus would you really be upset to hear this one announced? Yeah, I didn’t think so either. 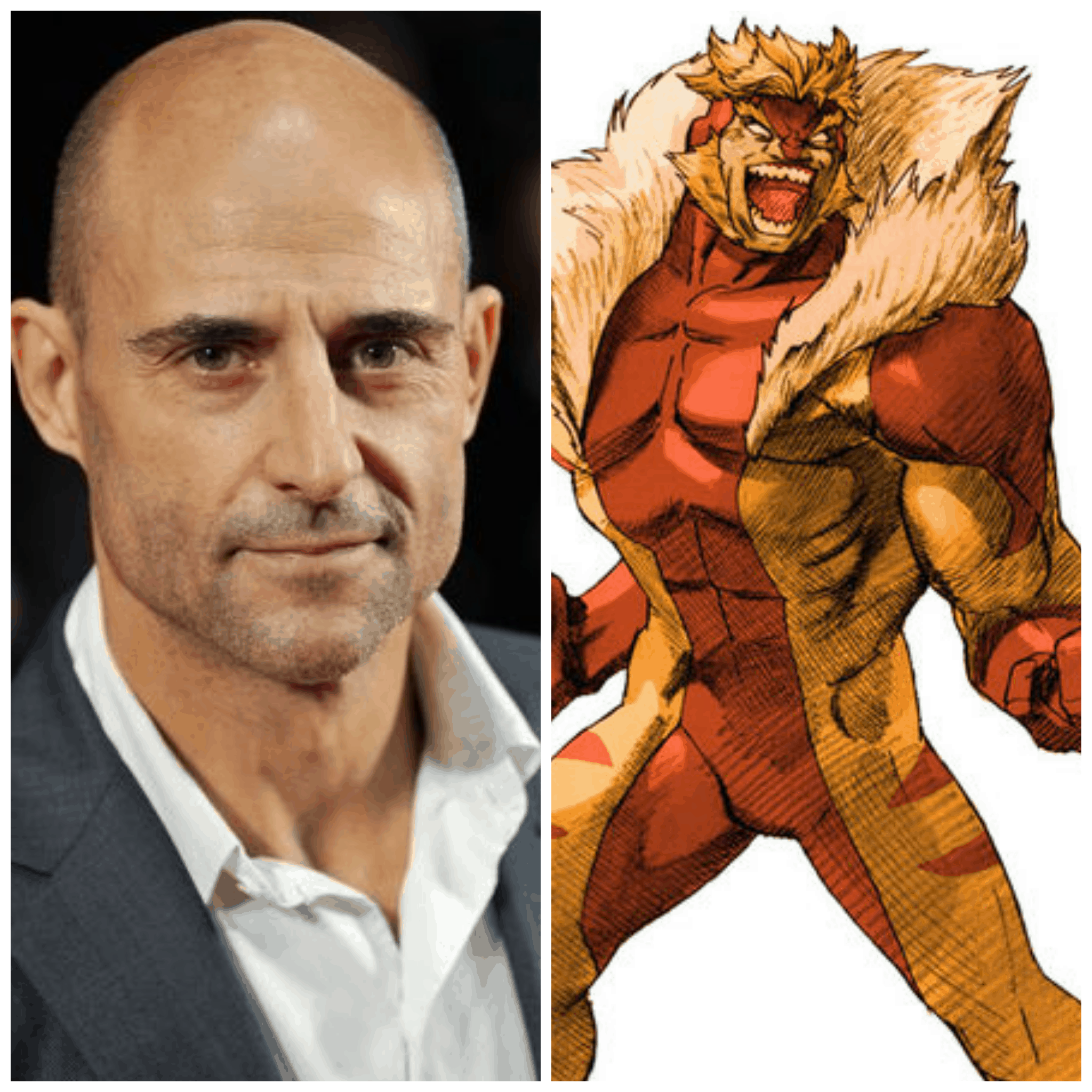 Mark Strong/Sabretooth
One of the 2 big bads in the film, my idea for it would be something akin to “something nuts is popping off in *name remote region of Saskatchewan* and we need to contain it aka The Wendigo is on a rampage, perhaps even infecting and creating more Wendigoes as it death marches across the frozen plains. Well, who better to hunt down the beast(s) than a bloodthirsty mercenary for hire and longtime Weapon X asset, Victor Creed aka Sabretooth! Mark Strong has a history of portraying complex villains and would be the guy who could add that extra oomph that has been missing from past castings. Sabretooth is a physical threat no doubts there but part of what makes him so terrifying is his ability to spout off insanely detailed threats and psychologically attack his prey while running them down. Mark Strong could no doubt do these things as well as provide the gusto needed to make Victor seems like the one man army he is.

So there ya go your premise: a cannibalistic plague is spreading throughout the wilds of the North, creeping its way into Canadian society. Dr.James Hudson tasks himself with putting together a defense when the Canadian government seems satisfied to kick back and let a mad man aka Sabretooth hunt the threat and as always not take the one scientist who actually knows what’s going on seriously. This leads to the formation of Alpha Flight! Canada’s counterpart to the Avengers Initiative and opens up a whole new world for the MCU. After an epic showdown between Alpha Flight, Sabretooth and waves of bloodthirsty Wendigo our heroes emerge victorious just in time for poutine and rethinking their involvement in the team. Just when things can’t get any weirder we cut to the after credits where the Canadian government butthurt Alpha Flight worked decides to fire up their own Flight programs: Beta and Gamma with some choice name drops to accompany the reveal. Then we see James Hudson is confronted by a shadowed stranger (Tom Hardy) who congratulates him on their success but promises to hunt down the escaped Sabretooth with a trademark *SNIKT* and 3 claws shining in the dark as we fade to black and that my friends is the Alpha Flight movie we need, not the one we deserve.