I Don’t Need Another Issue

I have never been so engrossed in a piece of entertainment that I could not put it immediately down to do something else if someone wanted to. I have never felt the need to finish a chapter or issue before going to sleep, to finish out a season or series that is disappointing me simply for narrative closure. I like some entertainments. I love some comics. I love a lot of comics. I don’t need the next issue, or for there to be a next issue.

I can’t and won’t say I am the biggest comics fan or anything like that. I live and breathe comics, it is definitely my favorite medium, but I miss plenty when it comes out, and I have an embarrassingly hard time with approaching comics I dislike closely enough to academically appraise them in depth. I get scared off rereading certain comics because I know how I’m going to want to talk about them, and that I will want to talk about them, and how some people will respond if I say something.

Growing up, it was rare that I would be able to get three issues in a sequence, at one time, and pretty unlikely I would be able to afford and procure successive issues, month to month. I haunted quarter bins for novel looking comics. When I visited someone’s home and they had comics, I was all over theirs. But, monthly comics came out every month, and that was just too many in a year, to follow even one title. Biweekly? Yeah, Marvel, especially, used to release biweekly issues during some seemingly random seasons when I was a kid.

We often did not have broadcast tv, and if we did, a couple channels and a lot of snow. But, my mom was into having VHS tapes, especially stuff that was not necessarily mainstream, but was interesting. My mom took risks in the entertainment she grabbed, for herself, for the family, and for her kids, including me. Specific Defenders, Flash, and Captain America comics got me through some surgeries. Near-lethal illnesses were punctuated with the first collected edition of Batman: Year One and a hardcover of Little Nemo strips. We had black and white crime comics, color reprints of 1950s horror, manga and manga-imitations, Calvin & Hobbes and Krazy Kat whether we were living in a house at the edge of the Black Hills or a city housing apartment in Santa Fe.

We had tapes of the first two Alien movies, black and white art gallery short films, the early 90s Flash recorded by someone else off tv every week, bought at a flea market, Mexican and Japanese movies. I assumed, based on the home tape collection, that David Lynch and Mark Frost’s On the Air was as standard television fare as I Love Lucy reruns and the Teenage Mutant Ninja Turtles cartoon. And, I never felt a what about the next episode!?! with any of those; why would I with a comic?

This offends sometimes. The fear that a comic will not have another next issue is real and very serious for many, many fans.

What drives the reader – or, is it in this respect, the collector? – to need the reassurance there will be not only this hit, but a future fix? It is not a genuine addiction, and I doubt it is really a neurosis, but the situation, and its vibrant, viscous urgency are undeniable. Most of what the fan makes out as neurosis and intensely-felt world-changing issue, is generally, affected out of self-deprecating, and fanatic group-bonding humor.

But, I also do not mind spoilers, and that is, for many fans of anything, a true offense. Sports cans do not want to know the score before they see the game, unless they’re only collecting the stats, and then they want them, generally, still in chronological order. Sabermetrics still tracks developments.

It can be said, and justified, along the lines of this anxiety, that I do not love this character or that book as much as the fans for whom a missed episode or spoiled scene is distressing. You have to buy in, to buy into the justification, but I am more than willing to admit that some genuinely feel it.

A fan of a specific title or character/group might stop reading the serialized comics, but still keep thoroughly abreast via reviews, discussion groups, or wikis. Is this the sabermetrics of comics? I was always more interested in the implied narrative or existential quirks in The Official Handbook of the Marvel Universe or a Legion of Super Heroes role-playing guidebook, than by the numbers quantifying leaping ability or intelligence, the weights and measures that seemed so often arbitrary even ignoring that no one can agree with an “omega class” mutant is that makes them “omega.”

So, if love is need, in this equation, what do I get out of a new comic, or rereading an old one?

Comfort? Amusement? Most self-identifying fans of anything, feel one should pick a team or support the home team. There is a sense of home, of belonging, and comics have done well with that, especially American comics starting with Stan Lee’s chummy, direct address to the audience throughout a story, as the norm. The running side note commentary in most Japanese comics from the past thirty years, in a slender box that takes up half a page every chapter or volume in many manga.

I fail to hold in my head, the history of even a character I am very familiar with, especially if they exist over hundreds or thousands of issues and appearances. I am much more apt to remember minutiae. The Thing reads Stephen King. Mr Fantastic reads Clive Barker. The Thing likes bubblebaths. The Invisible Woman likes hot baths. 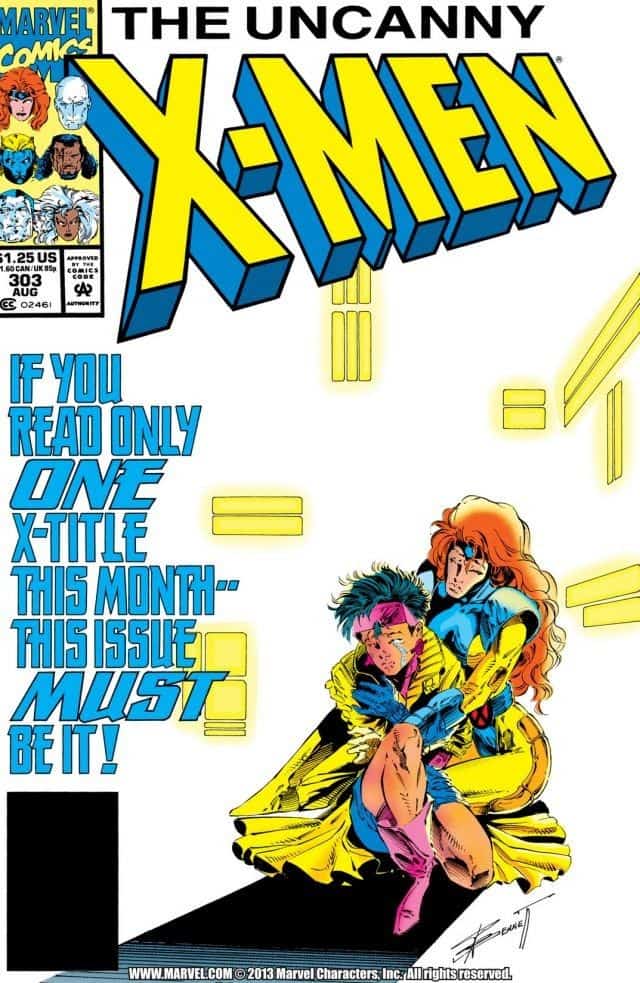 One of the most beloved issues of Uncanny X-Men for those who read x-books in the 1990s, is the issue wherein Illyana Rasputin dies, a young girl, and her best friend from when she used to be a teenager (time wonkiness; devil dimensions) helps a current-day teenager to cope by giving her a stuffed animal (and also gets a soul sword shoved into her, but she does not notice – x-books took “too convoluted” as a challenge). Its cover loudly proclaims the issue’s importance. The contents include a “major death,” and some heartwarming grieving and bonding. It remains, for readers, a moving and important comic. 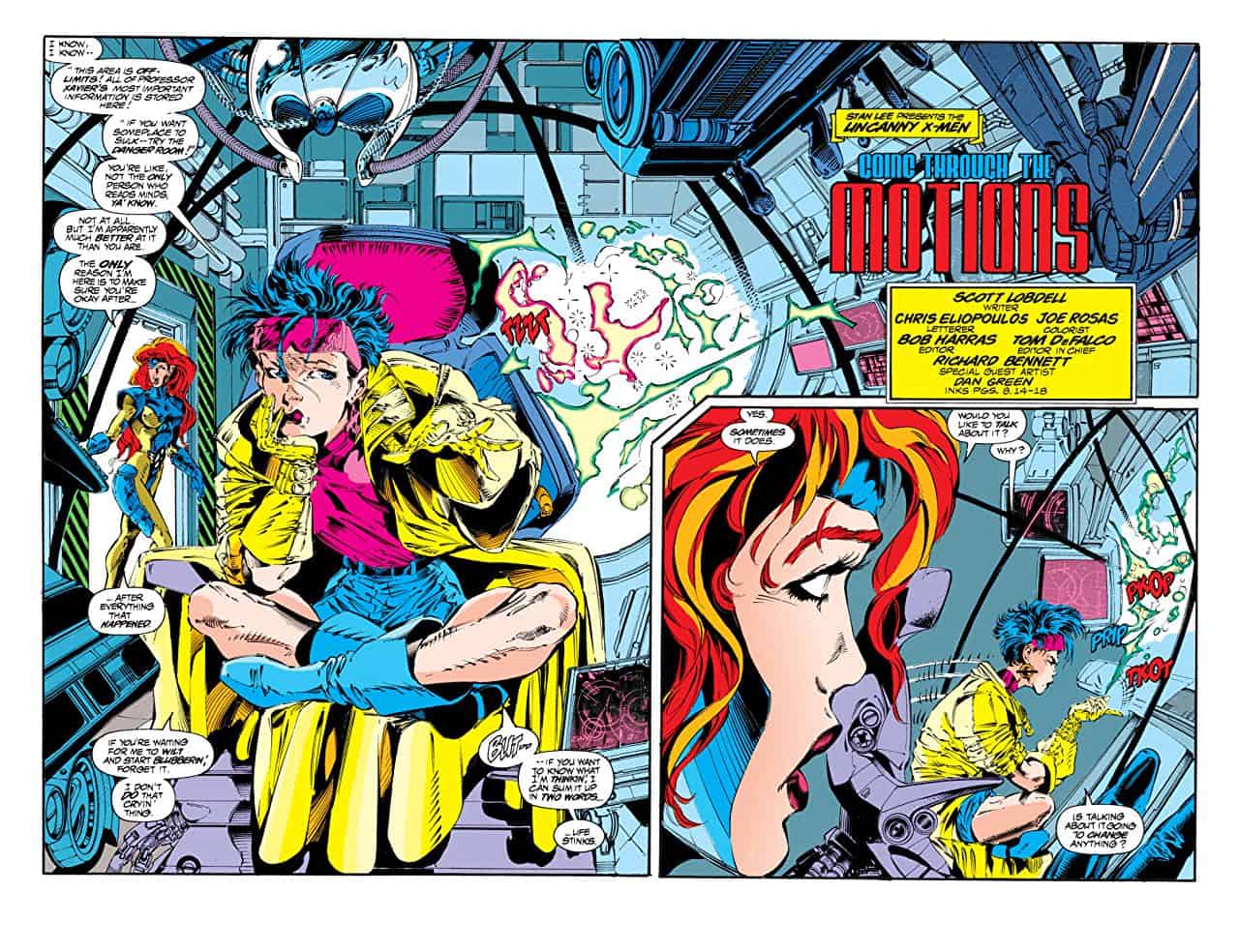 I am touched by the idea of the comic. I am moved by the plot of the comic, as long as we call those interludes the plot. The issue, taken in its entirety, is awkwardly constructed, oddly paced, and the dialogue rings neither true for me, nor to me, beautiful. The art is decent, but not nuanced and missing the consequences it could track panel to panel. The coloring and lettering are standard. I would wager, with the lapses in panel to panel continuity or in-world consequences to in-world actions, that the authors of the comic know the importance here is in the

What I have come to accept, is that I am not alone in my assessment of the comic, but that many who feel as I do about the issue as a comic to be read, still appreciate its significance as containing a “major death,” and the narrative connections of its focal characters. It remains, even if it is not a great read for them, a significant and special issue, “not to be missed.”

I know that I feel sacrilegious admitting to my displeasure with it, or boredom as it might be, since I do not entirely dislike it, but I do not particularly care for or about it. I am enough a part of the fandom to know that I should not speak too ill of it. And, I am humane enough, I have no interest in trashing it excessively, or even speaking plainly of my feelings on it, if it is going to distress other fans.

There are fans, self-identifying fans, of characters or groups, who, when faced with comics they dislike or scenes they do not appreciate, go out of their way to distress those who do enjoy them. There are, also, those self-identifying individuals who are so upset that they threaten the artists and writers with violence, or spend way too much energy tweeting attacks against editors, publishing houses, or critics they believe have some magic and unfair sway in matters. The toxic side of an already toxic pick a team feudal state fannishness.

It is those extremes that help me, perhaps unfortunately, to be comfortable in my fair-weather fannishness, my take it or leave it approach to the monthly books and multi-title histories. This spirals to an easy acceptance of reboots, continuity re-workings, new serial numbering systems (starting with a new #1 or setting to a larger numeral by whatever maths needed), and probably in the same vein whether it seems so or not at first glance, when a work is re-colored or reprinted with errors corrected or amendments un-amended. DC Comics, for example, bothers me more for being called Detective Comics Comics than it does for partially reworking its “universe” continuity every so often, and truth told, neither bugs me. I have a fundamental inability to leap past the narrative reasons usually given in the comics.

Crisis on Infinite Earths was twelve monthly issues just telling us why past events and statuses were going to be, going forward, different. That is  far more in-story reason than why a movie called Halloween is a sequel to a movie called Halloween but without the narrative or events of the previous sequels, but it will also comment, obliquely, on those sequels and their existence, both intentionally and reflexively. Which, to be clear, is also still not a big deal.

Everything fits together. Any pile of stuff fits together, even if it fits together as a pile. You may not like the pile, but it is still that pile. Nobody is forcing you to live in the pile or praise its name. The need for successive issues ad infinitum, is a Tower of Babel project and those are just piles, bildung supra bildgung, and go about where the Tower of Babel did. Like jogging at 6 a.m. every other day, it is a thankless task except that it can strengthen some muscles and it can be, for some, fun.

I Don’t Need Another Issue

Under the Shell: A Journey Into the World of TMNT Collectables and Fandom!
April 22, 2021