Thirty years ago, comics changed forever. We didn’t know what impact the dazzling chromium covers, the delicate and sometimes badly-executed die-cut covers, or the thousands upon thousands of first issues had. The Nineties were in full swing, then a juggernaut broke through not only the walls of every LCS across the country but dared to take on Marvel and DC. Image Comics had arrived.

By now, most people know the story: a cream-of-the-crop group of artists – Erik Larsen, Rob Liefield, Jim Lee, Whilce Portacio, Marc Silvestri, Jim Valentino; lead by Todd MacFarlane – bolted from Marvel and banded together to form a new, independent publisher, one where they would have ownership over their creations. These hot young Turks were part of a burgeoning movement in comics writ large (but Marvel in particular) that saw artists wielding more power than writers to boost sales and push narratives forward. This wasn’t the old school John Byrnes or Frank Millers or Walt Simonsons who could both draw and write; these guys were pencillers first and (with the exception of Valentino) little to no actual writing experience.

But what they could do was move units. In 1990, Marvel placed enough faith in MacFarlane’s rising star that they awarded him an unprecedented fourth, eponymous Spider-Man title to write and draw. It sold a then-record 2.5 million copies, and in effect, the rules changed overnight: a comic didn’t necessarily have to be well-written to sell in this new paradigm. The fans wanted comics that looked awesome, that were bold, in-your-face, poster-worthy. Comics that weren’t your dad’s. Comics that felt new, and maybe even a little dangerous as they shook up the status quo. 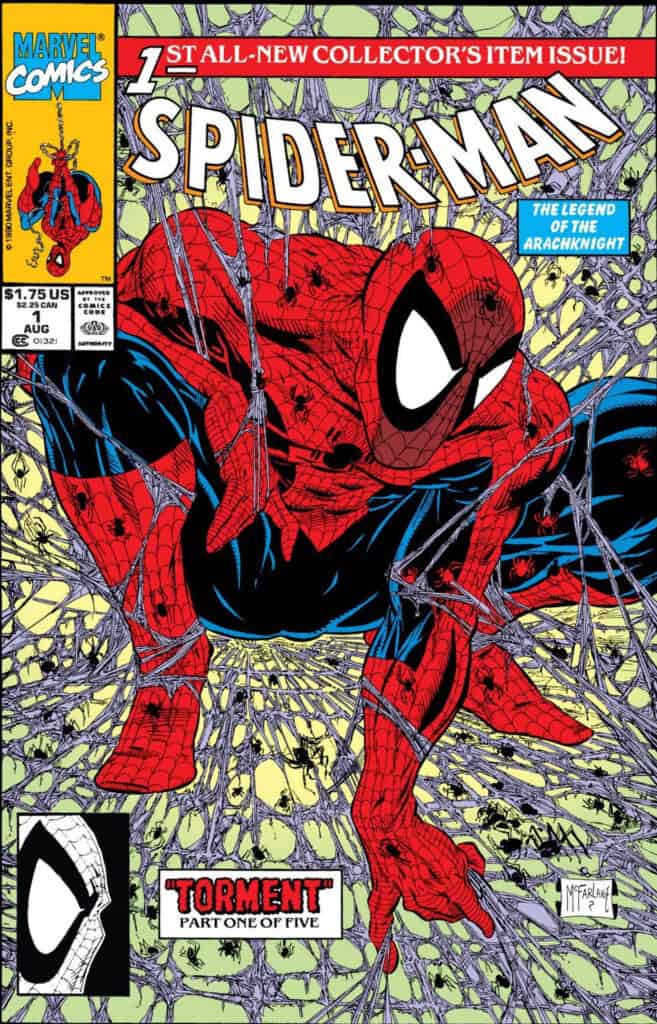 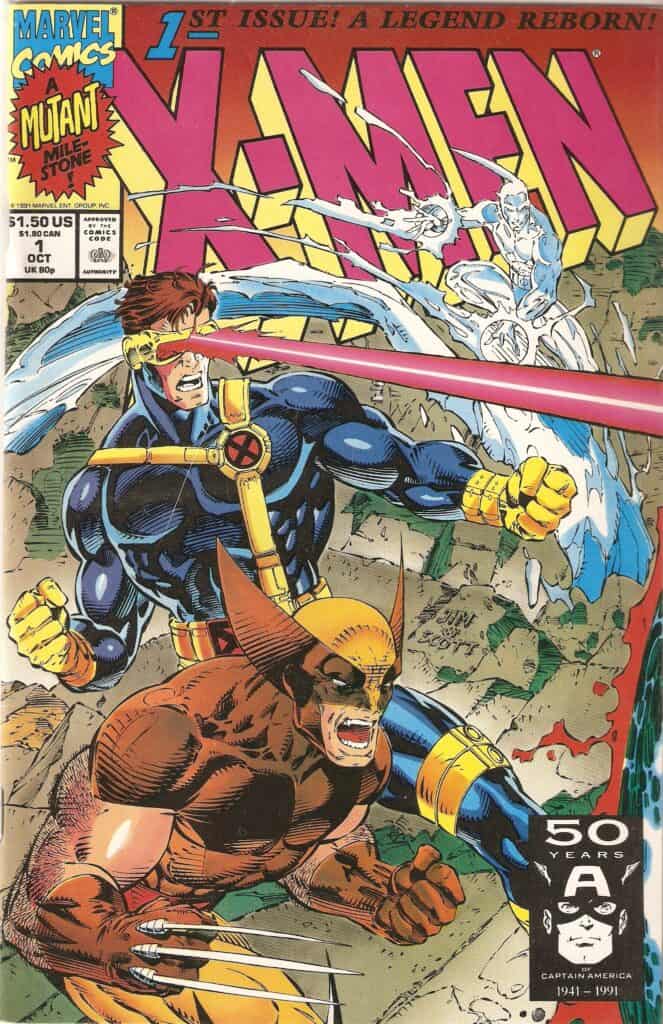 Perhaps you’ve heard of this comic.

The collector’s bubble had begun in earnest.

Those artists, realizing the collective power they wielded, sought to push Marvel to pay them a fairer shake from the sales of those comics. Editorial balked. The artists walked.

And the rest is history. Image Comics had arrived.

And arrived, they did. Rob Liefeld was first out of the gate to strike with his Youngblood #1, released April 10, 1992. It hit the shelves like a ten-ton hammer. Bringing his raw and unapologetic energy from Marvel, Youngblood #1 sounded the horn and sent the troops to the frontline. Liefeld was no stranger to team books, so it was no surprise that he debuted such a book. First appearing in 1987’s RAMM #1 from Megaton Comics, Youngblood was a government lead team of superheroes whose backgrounds were as diverse as they come: former FBI agents, government assassins, a troll-man, a former fashion model, just to name a few. With characters like Shaft, Badrock, and Chapel, Liefeld would see his characters adorn many forms of merchandise. Everything from shirts, action figures, t-shirts, and trading cards. In those heady early days, Image was brilliant at marketing itself to as wide an audience as possible.

The first issue featured a flip-around double cover and two different stories, which served as an origin story of sorts, more introductory (if you will). Issues flew off the shelves. Speculators and fans alike could not get enough of this book. We were engulfed in everything Youngblood. As a long-time fan of Rob Liefeld, seeing him break away from Marvel and not only get the spotlight but get complete freedom with how his characters should operate felt like a new breath in the hobby – a new voice for a new generation. The early ’90s were replete with that sensibility across the board: grunge. Film. Fashion. Generation X was making its mark, and it had a particularly sardonic and blunt way of taking the piss out of whatever came before it. Comics were no different; the Image ethos was all about doing something new, and different, and distinct from the Big 2. Their goal was to make Marvel and DC squirm with the discomfort of their own antiquity, and in the eyes of the kids, they more than succeeded – and Youngblood was the first to charge into battle, to stake a claim on a new generation of fans.

Older fans, for the most part, rebuffed it. Established writers and older artists scoffed at these “all-art-no-story” Image comics. But the Image movement wasn’t about the older fans. They could come along if they wanted, but the flag being planted by Image was absolutely bringing something new to a generation of readers that didn’t yet know what they wanted yet; they just knew that they wanted something that they could call theirs. Image and Youngblood and Spawn and WildC.A.T.s  and Savage Dragon and Pitt more than struck that chord – they were a clarion song heralding the arrival of new life in the comics galaxy. Sure, the ’80s had had a strong, impactful string of black-and-white publishers like Comico, Pacific, or Eclipse that arguably laid the groundwork for Image. But none of them ever came within sniffing distance of touching the hems of Marvel and DC’s capes. Image was the first publisher to truly represent a destabilizing threat to the Big 2’s unshaken hegemony, and it’s not for nothing that the chunk Image took out of their sales scared them spitless enough that in very little time, many of Marvel’s flagship comics looked suspiciously similar to the Image house style.

But that’s a story for another time.

Thirty years later, there is still magic in the original Youngblood series, and even the spin-offs are fun to go back and flip through. Understand: Youngblood is not going to make the Mount Rushmore of comics, but we should not let that sway the fact that it is an integral part of comic book history. To speak to the claims of Image’s detractors, Youngblood IS a thinly-plotted affair with dialogue that is clearly penned by someone still honing his craft. But to dwell on that is to miss the point entirely. Youngblood, and by extension, Image, wasn’t about being the next Neil Gaiman or Alan Moore. It was about doing something new. Something unprecedented, something that birthed a new way of connecting fandom with comics. It was exactly what that moment in comics history needed.

More to the point, Youngblood was exactly the comic that should’ve launched Image. Fans got a team book with super-sexy Nineties-style characters, the creators were young and hungry, marketing was top-notch, and at the time, it felt that the comic book world was turned on its head… because it WAS. Youngblood had a certain moxie at the beginning that helped feed the beast. It isn’t Rob Liefeld’s best work. However, it will be forever cemented in industry lore and the flagship book of Image.

Rob Liefeld reminds me of U2. In that, you know what you will get every time you pick up a Liefeld creation just as you will the latest U2 record. You may have one or two songs that are just ok, but the rest is just right. It was such a great time for comics, and Rob Liefeld and Image were a massive part of that.

And the most amazing part? Image was just getting started.