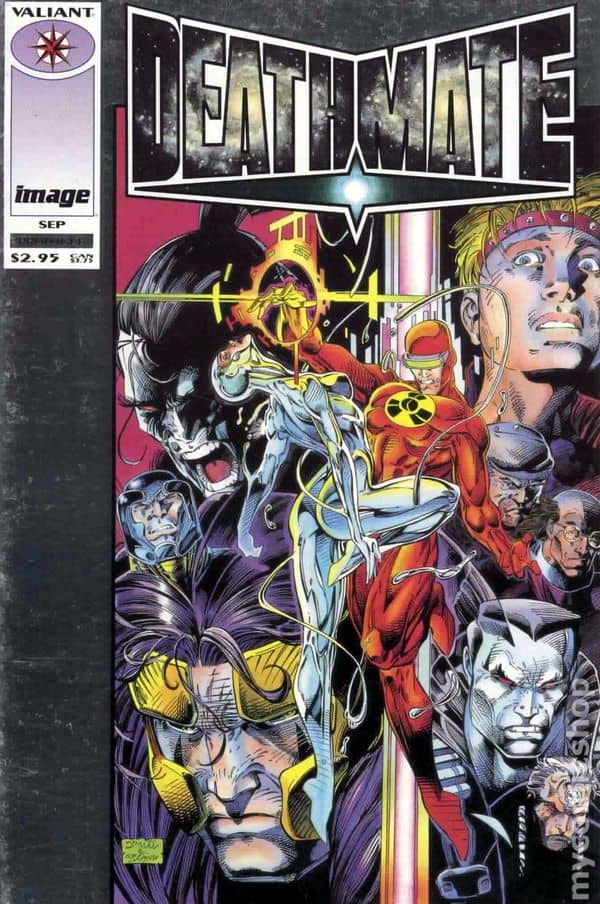 Well, it should have worked.

By September of 1993, Image was still riding high: Steve Oliff had won the company’s first Eisner Award for his coloring in Spawn. Savage Dragon had graduated to a monthly title. The first year’s publication deal through Malibu had successfully concluded, leaving the fledgling Image successfully standing on its own and in a deeply strong market position. And it was diversifying, whether the company’s detractors wanted to see it or not: The Maxx, 1963, and even the mostly-forgotten Splitting Image humor comic were proving there was more to Image than well-oiled, impossibly-physiqued warriors with great hair. Respectability in the form of Alan Moore, Neil Gaiman, Dave Sim, and Frank Miller contributing one-off tales to Spawn #8-11 earned gravitas and praise, and sent a clear signal that Image was not messing around when it came to playing with the big boys.

So, with that said, an inter-company crossover with Valiant Comics seemed like an idea whose time had come.

By 1993, Valiant Comics was the other upstart publisher taking bites out of Marvel and DC’s unchallenged hegemony. Cofounded in 1989 by former Marvel editor-in-chief and industry legend Jim Shooter after his acrimonious dismissal from the company, Valiant began publishing in 1991 and had been steadily making a respected name for itself by reimagining old Dell/Gold Key characters like Turok and Magnus, Robot Fighter and Solar as well as introducing exciting new properties like Rai, X-O Manowar, Bloodshot, and Ninjak into one big, interconnected universe. In Valiant’s early years, Shooter leaned heavily on his contacts and friendships from his decades within the comics industry, and was able to lure top-tier creators like Barry Windsor-Smith and Bob Layton to his stable of creatives in such a way that made Valiant an exciting alternative to the predictable tropes and played-out storylines being churned out by the Big 2. And even though Shooter parted ways with Valiant in 1992, the company he had helped to build was in an excellent position to continue growing.

So, why not partner up to crossover with the other new, splashy, new kid on the block – Image?

Heavily hyped during the height of the ’90s speculator boom, Deathmate was perhaps doomed from the start by virtue of its bizarre “color” issues, rather than numerically sequential (like, ah, literally every other comic in existence). So while the miniseries was logically-enough bookended by Deathmate Prologue and Deathmate Epilogue one-shots, the middle issues were Yellow, Blue, Black, and Red, which makes about as much sense as you’d expect. Valiant and Image would each publish half the issues, which made sense from a distribution of labor perspective, but meant that either company could wind up being at the mercy of the other’s publication schedule. This came to pass as the Image issues were shockingly late (Valiant’s shipped right on time); the Red chapter hitting shelves six months after Valiant released Epilogue. Even more confusingly, the stories within each issue were designed to be read in any order, meaning that from a narrative perspective the story often felt like it was just spinning its wheels even when read as intended. 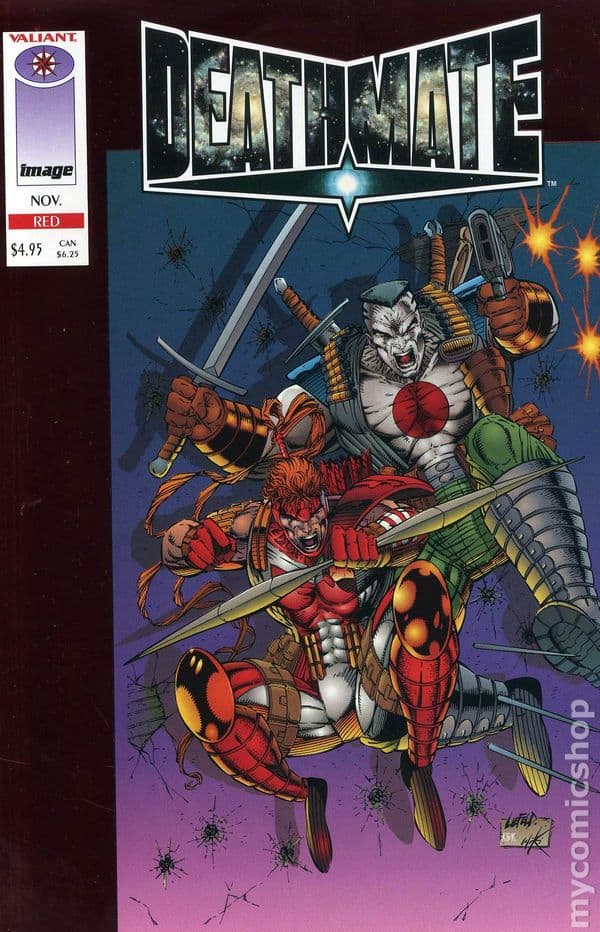 It was that kind of a debacle – easily the most publicly spectacular yet for Image. Valiant’s credibility was bruised, but largely unburnished. But by this time in its history, Image had developed a notorious reputation for late-shipping comics; the large-scale and very public nature of Deathmate didn’t help that perception.

That’s not to say that the creators involved didn’t give it their all. The basic plot revolved around Void from WildC.A.T.s and Solar having a chance encounter across dimensions and falling in love, but of course, their union would trigger a large-scale extinction event. David Michelinie, Bob Layton, Joe Quesada, a young Bernard Chang, John Ostrander, Sean Chen, Jim Calafiore, and other industry stalwarts all contributed to the Valiant halves of the story; Brandon Choi, Brandon Peterson, Danny Miki, Rob Liefeld, Jim Lee, Greg Capullo and many others brought their best to the Image-published issues. Nobody could say that there wasn’t a stable roster of talent behind Deathmate, and that based on name power alone, it should have been a slam-dunk.

Instead, Bob Layton, who succeeded Shooter as Valiant’s editor-in-chief, referred to it in hindsight as “an unmitigated disaster,” and claimed he had to fly out to California to sit with Liefeld to ensure his penciled pages would actually get done so he could ink them (which he did in a hotel room). Worse still, the crossover’s heavy hype prompted local comic shops to heavily pre-order the issues, and when they didn’t ship, that tied their capital up in an extremely detrimental way, which ultimately resulted in a multiplicity of unsold copies gathering dust on shelves once the comics eventually did ship but fandom had lost interest and moved on.

Deathmate perhaps is the apex of Image’s earliest ambitions getting the better of them, but their eyes being bigger than their stomachs. The founders’ hearts were in the right place, but when it came to actively running a business, they still had a lot to learn. They had flown too close to the sun, and fans and retailers alike got burned as a result. Today, Deathmate is widely regarded as one of the biggest misses in Image’s entire history. They were young, they were hot, they were “it” – but Image still had some growing up to do.

NEXT WEEK! Image30 Chapter 11: StormWatch, a comic that would yield far more influence than it had any right to deeper into its run rather than at the beginning.