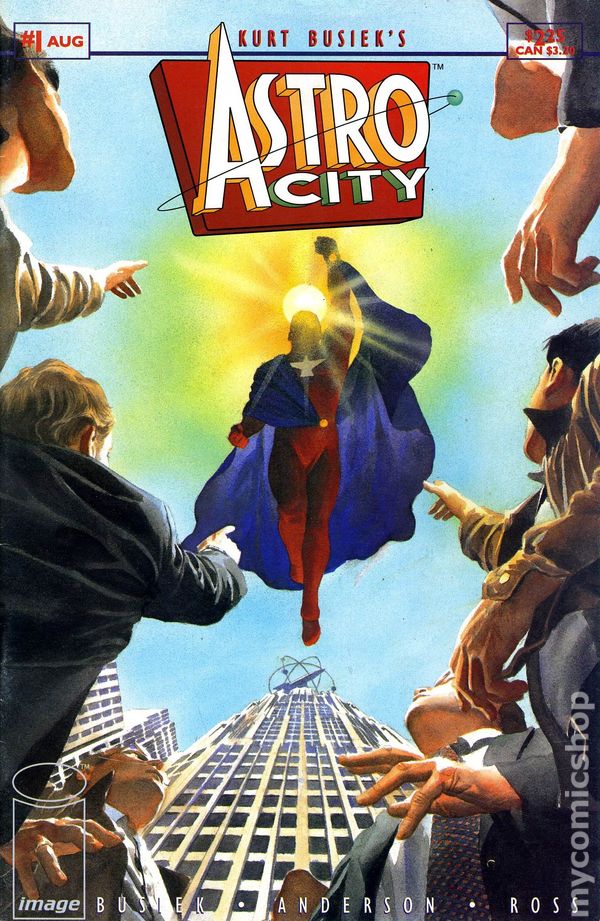 By 1995, storm clouds were gathering over the comics industry.

Unsold, overordered copies of supposedly hot “collector’s item” issues were littering local comic shops’ shelves. Sales industry-wide were in freefall. Speculators, who had fueled the collecting bubble that had ballooned the market, abandoned ship in droves as the collectors’ bubble burst with a vengeance. Sales of tie-in merchandise such as trading cards and action figures plummeted too, and comic shops nationwide began to shutter their doors, saddled with debt they’d never be able to pay. Even the distribution side of things was adversely impacted: Marvel had purchased Heroes World in late 1994 to be its sole distributor, but had neither the cash flow nor the infrastructure to keep it afloat. The company, which had been in business since the mid-’70s, closed its doors for good in 1997 – less than a year after Marvel itself would make national news by declaring bankruptcy. Their stock sunk to a mere $2.36 per share, and the ensuing battle between owners, investors, and lawyers resulted in rumors of the company’s impending demise, or that they would be forced to sell off their major characters to DC just to attain solvency. As the elephant in the room, Marvel was a microcosm for an industry that had gotten too big, too fast; reliant on the empty promises of speculators, gimmick covers, hollow hype, massive overprintings of “key” issues, and greedy corporations flooding the shelves with more, more, more – with little to no artistic merit to back it up. Product was produced on the cheap for the sake of producing product on the cheap.

So of course, during comics’ darkest hours, a hero would come out of nowhere to be a new guiding light. 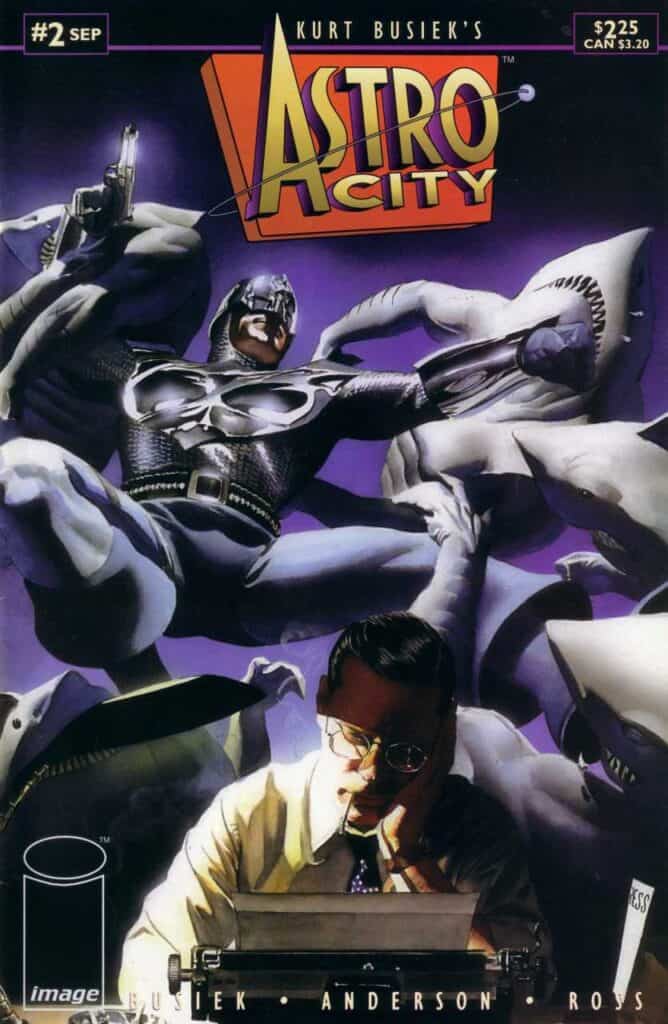 And it wasn’t necessarily that the first issue of  Astro City made any record-breaking sales, either. Nor was it an over-hyped flash in the pan comic. It was in the delivery, the tone. Its deliberate nature. It was more that it was about what superhero comics had, in many ways, forgotten to be about: aspirational heroes protecting a world that embraced them for their good deeds, plain and simple.

Writer Kurt Busiek had first cut his teeth on this sort of story with painter par excellence Alex Ross with the eponymous Marvels in 1994. The four-issue prestige miniseries, fully painted by Ross, was a breakthrough in superhero storytelling. Instead of focusing on the heroes themselves, it centered on the man-on-the-street perspective. What would it truly be like, the series asked, to live as an average person in the Marvel Universe? Journalist Phil Sheldon began his career on the eve of World War II, just as the Human Torch and Namor made their public debuts. Readers were treated to a front-row seat on the organic growth of the Marvel Universe as a real “world outside your door,” as Sheldon’s career for the next thirty years chronicled the early years and public debuts of the Fantastic Four, Spider-Man, the X-Men, Captain America, and all the rest. It was one of the most-buzzed about and seminal works of the entire decade, and stood in stark contrast to the grim-and-gritty ethos that was dominating the scene at the time.

Yet, it was also an outlier, given that it was only four issues. So, Busiek figured, why not do the same thing with a whole new world of heroes, built from the ground up? The possibilities would be limitless. After Marvels‘ success, Busiek was gifted much-deserved A-lister status (he’d been quietly toiling away as a writer for several years by that point but hadn’t yet broken through in any meaningful way) and had a license to do pretty much whatever he wanted. And what he wanted to do was honor superheroes. Alex Ross was cut from the same classicist cloth as Busiek, so it made sense for the two of them to continue working together. However, a monthly book wasn’t in the cards for Ross from a time management perspective, especially since by then he was busily working on Kingdom Come with Mark Waid for DC. But, he was happy to contribute character designs and covers: 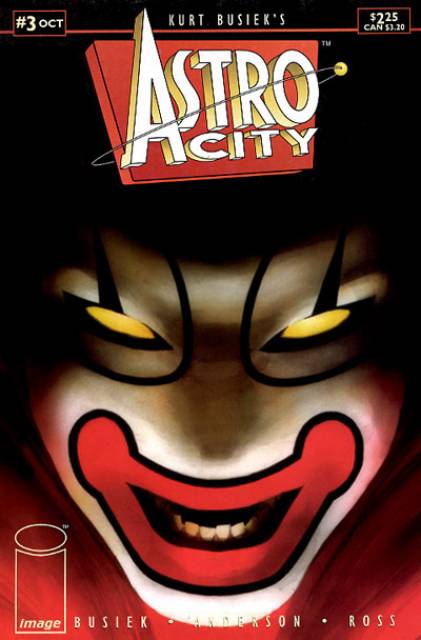 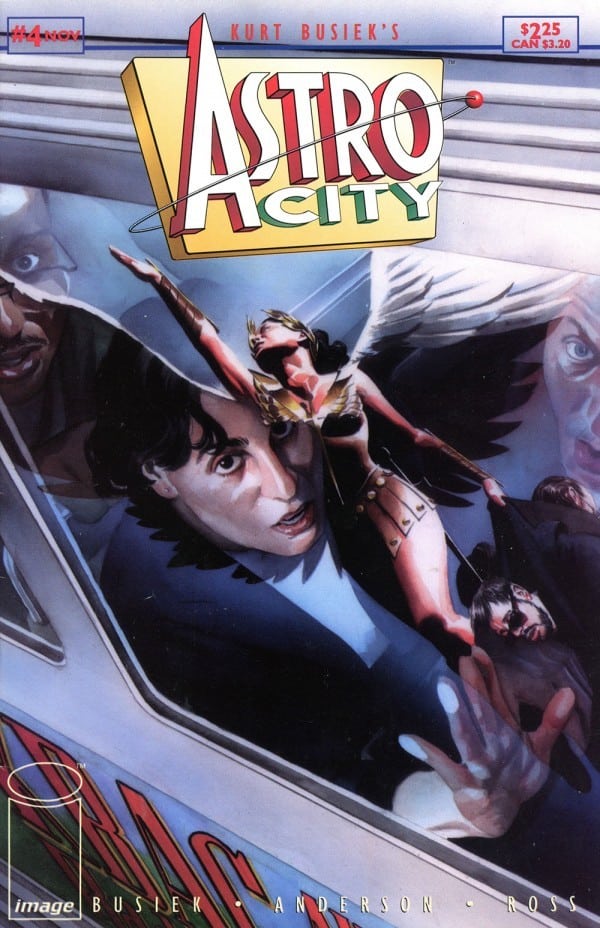 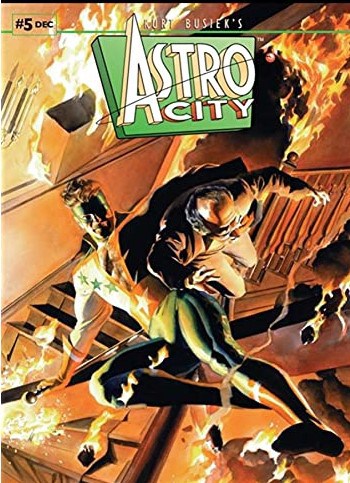 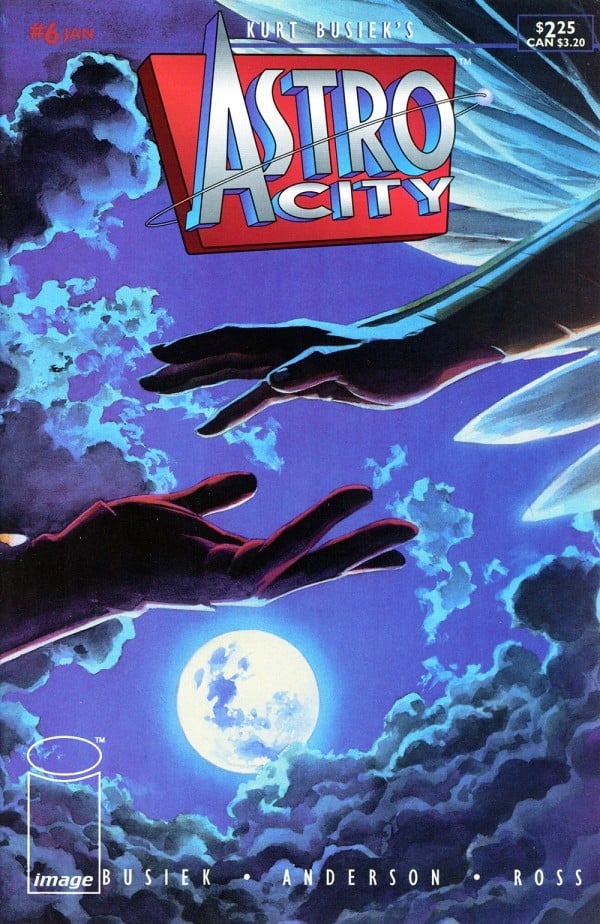 Interior pencils would be handled by Brent Anderson, an industry veteran who at that point had been a workhorse for a decade and half, steadily and studiously producing quality, if unshowy work. Anderson’s realistic figures were antithetical to the hulking, unrealistic, over-pouched brutes and women with broken backs in thongs for uniforms that had become the norm in the hyper-adrenalized ’90s. His depictions of superheroes made them feel real, and like real people. He was (and still is) a master of depicting emotion through body language, posture, expressions, and scene blocking: 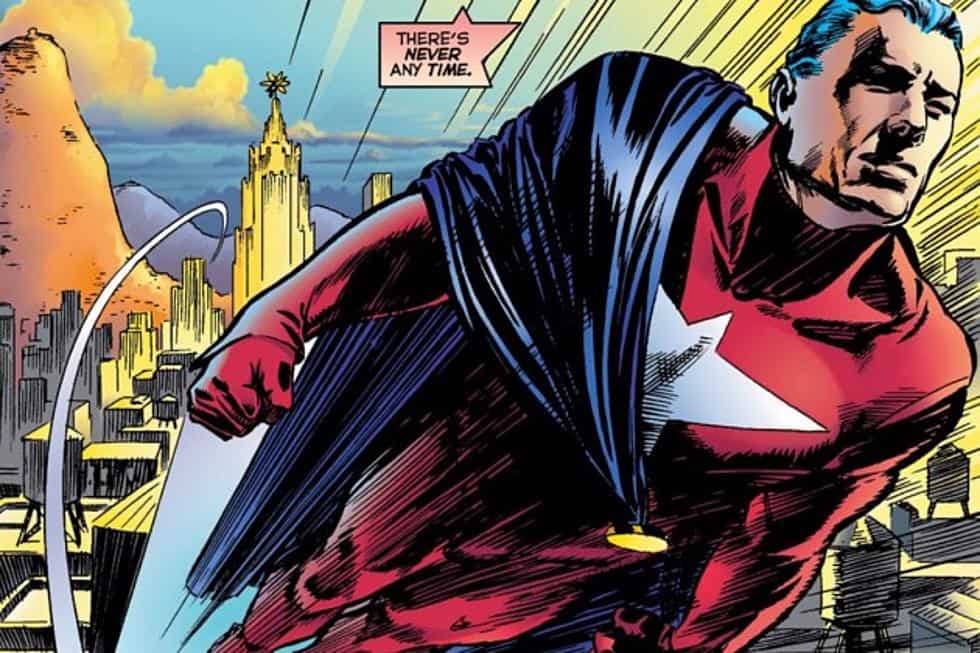 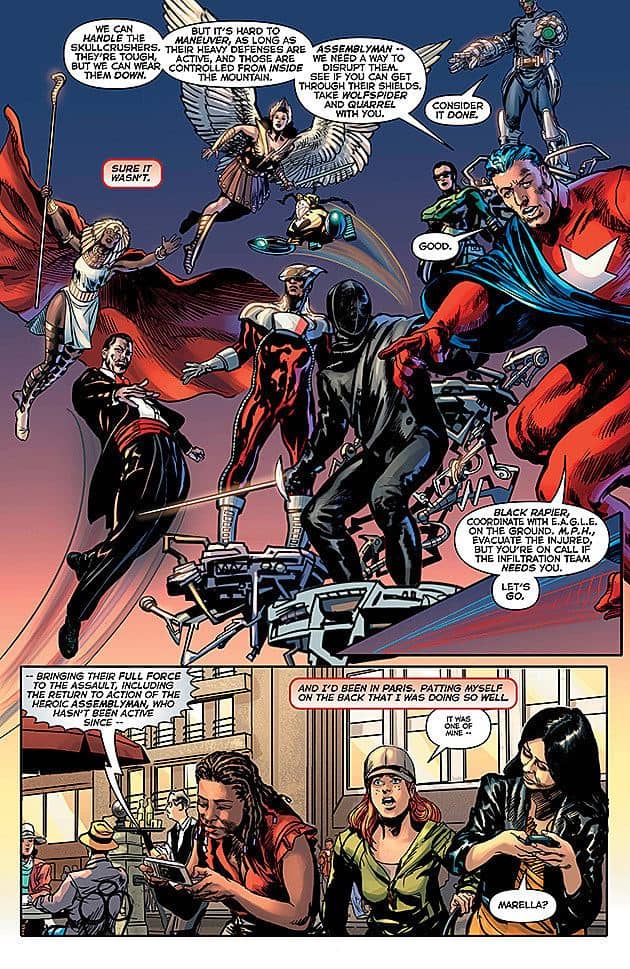 But at the same time, he could (can) render the ever-loving hell out of a massive superhero battle sequence, too: 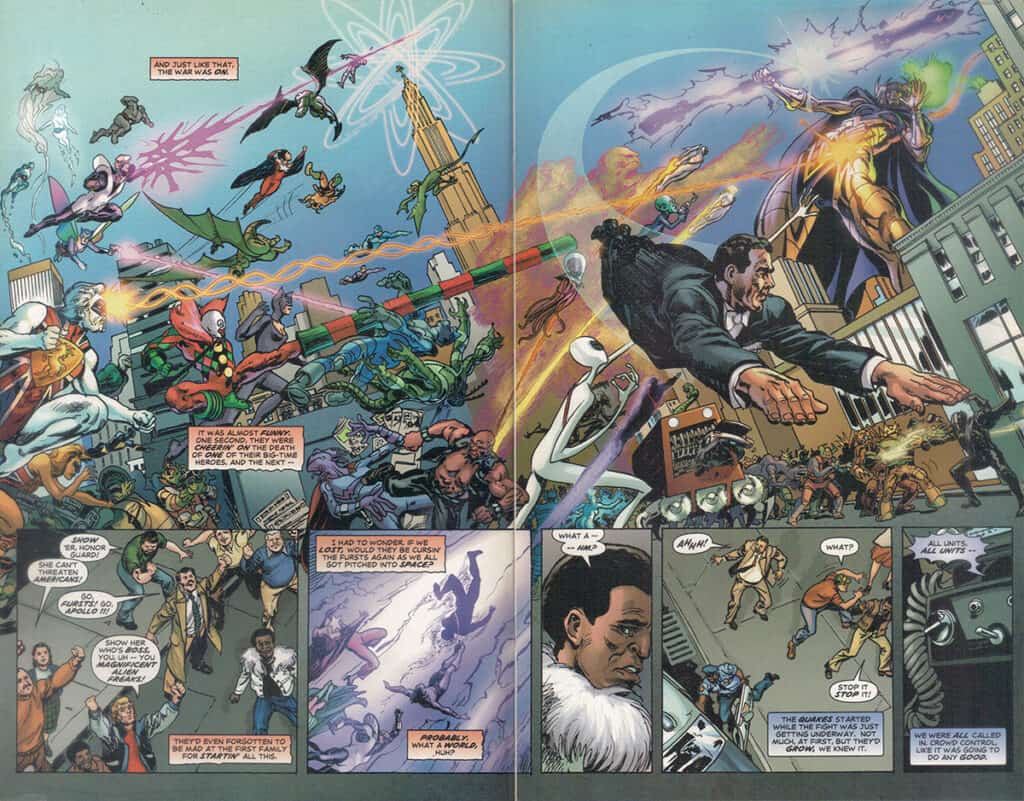 With the key players in place, Astro City needed a home, and found it at Wildstorm’s new Homage imprint. Homage was formed in 1995 with a deliberate mission statement of delivering more writer-focused material for Image, as opposed to the shock-and-awe visual narratives and double-page spreads that had largely been the company’s bread and butter up until that point. WildStorm honcho Jim Lee was a smart enough businessman to know that pretty pictures had gotten Image so far in its early years, but something needed to change if the company was to remain competitive. Thus was Homage born.

Astro City volume one, issue one launched in August 1995 to universal praise from both fans and critics. The six-issue miniseries was the most talked-about, Most Important New Comic of the year, and would be destined for industry awards, accolades, Wizard Magazine covers, and perhaps most significantly, a renewed sense of focus on crafting quality stories that kept humanity at their core rather than greased-up muscle-men and -women wielding weapons the size of cattle. It was a sharp and deliberate contrast to Image’s… image up to that point. But it was also a clarion call that the times weren’t just changing, they needed to change. For comics to survive their then-current state of affairs, more comics like Astro City needed to be produced.

And indeed, they were. The mid-’90s saw a turning point across the board when it came to the kinds of books that were winning fans over: Strangers in Paradise, Leave it to Chance, Bone, Mage: The Hero Defined, Grendel, Sin City, Hellboy, and so many more began dominating the conversation as the mid-’90s began its inexorable march toward the turn of a new century. The conversation was changing. The comics industry, though in the throes of some near-fatal growing pains, was showing signs of maturing in an actually mature way that reflected the fact that fans who had grown up reading superheroes might want something a little different as their tastes refined. DC caught wind of this and in addition to their Vertigo imprint already being an historic high point for quality sequential art storytelling, began a run of truly spectacular mainstream work such as Starman, Hitman, Superman For all Seasons, Batman: The Long Halloween, Kyle Rayner as Green Lantern, JLA by Grant Morrison, and as the decade closed, a JSA revival that would set the standard for the entire next decade to come. Marvel would eventually get themselves up to par, but it would take a few false starts before they could get out of the hole they’d dug for themselves.

The so-called Dark Age of comics is typically thought to begin in 1986, when the twin revolutions of Watchmen and Batman: The Dark Knight Returns took not only the industry but the entire world by storm. It wasn’t enough for heroes to save the world anymore; they had to be dark and gritty and brooding and violent and beat up crack dealers instead of the interchangeable primary-colored supervillains of the week. The landscape had changed, and depending on who you ask, the Dark Age was epitomized by Image’s early- to mid-’90s output. But it’s incredibly important to note that it was also Image that began the movement out of the Dark Age with the publication of Astro City – proof that the founders were seeing the writing on the wall, and knew that things were changing. And so they had to as well, if Image was to survive.

And survive it would – though not without some seismic changes behind the scenes over the course of the next two years that would leave it fundamentally different from the top down.

Astro City survives to this day, and remains a sparkling gem on the shelves whenever it is published. Its first ongoing series, spinning out of that initial mini, launched in the fall of 1996. The series has been published sporadically over the decades, often with lengthy gaps between issues or volumes. It would move from Image to DC/Wildstorm after the latter was bought by the former, then Vertigo after Wildstorm was folded for its lengthiest sequential run yet at fifty-two issues, concluding in 2018. But it is always worth the wait. Its most recent one-shot, a warm-up for the series’ next ongoing volume and its proud return to Image, proves that fact. The industry may change, but Astro City‘s longevity proves that it’s always relevant.

And always needed, if only to remind us how great superheroes would be if they really did exist.

NEXT: Jeff Smith’s Bone arrives at Image, further diversifying its offerings and proving that funny animal comics weren’t just yesterday’s news – they could be poignant, dignified, hilarious, and Eisner-worthy, too.