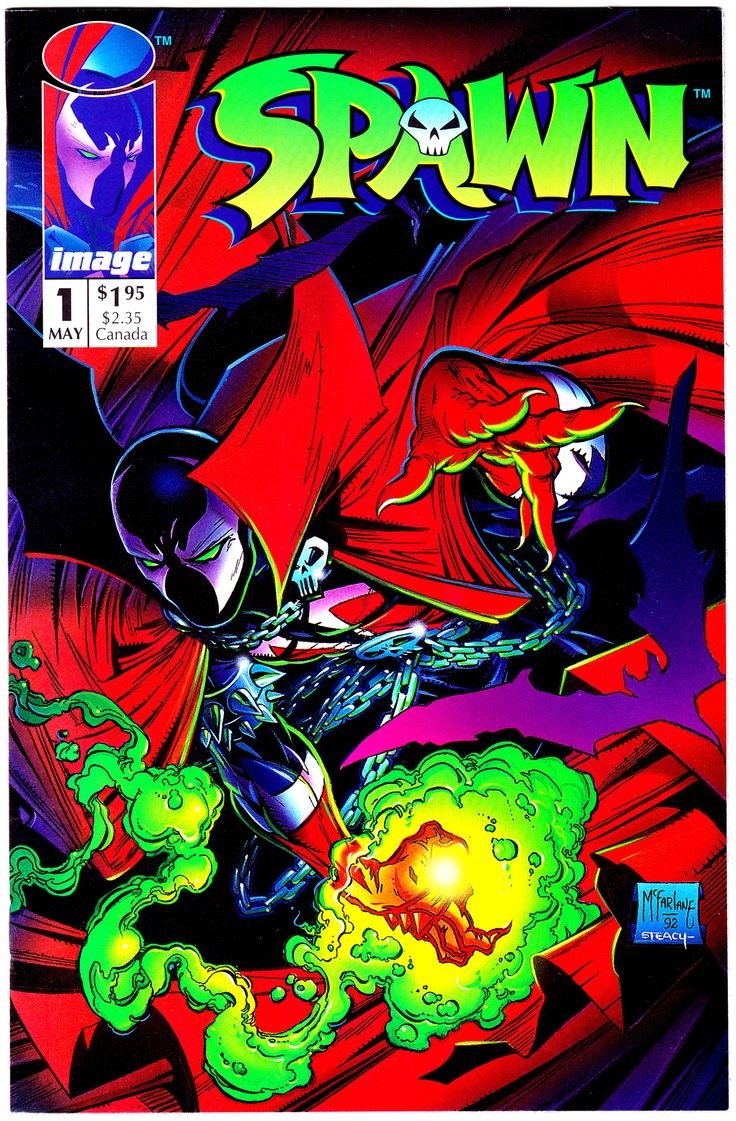 Here we are again! Singing praise to Image Comics and how they have carved a different route in the journey of comics. In this installment, we are going to talk about Spawn and Todd McFarlane. It was the late ’80s and times were weird, comics were okay, but there was this up-and-coming artist/writer who was getting ready to smash through the industry like some kind of incredible hulking guy. Regardless if the industry was prepared for Uncle Todd is insignificant in that it wouldn’t have mattered because Todd was going to demand you take notice anyway.

As his popularity began to grow, the House of Ideas started to take notice. In 1990 he would not only debut a new Spider-Man title but would change the character’s aesthetics in such a way that thirty-plus years later, artists the world over continue to not only pay homage but McFarlane’s influence rings true like the bells of Notre Dame.

So what happens when one of the most recognized and celebrated young artists of the time becomes unsatisfied?

Two short months after Rob Liefeld’s Youngblood became Image’s opening salvo with around 1.5 million copies sold, Spawn broke that record with 1.7 million – a record that still stands for a creator-owned comic. Image was, sales-wise, off to a great start. June 1, 1992 saw the introduction of Al Simmons, a former US Marine turned assassin who ends up making a deal with the devil in order to see his wife and child again. Of course, the devil was in the details… and Simmons wouldn’t be returned to Earth until five years had passed, and his wife had moved on, now married to his best friend. He would also become a Hellspawn – a kind of soldier for Hell. As the series would gain huge traction with speculators and collectors alike, Spawn became the flagship title, face, and easily the most marketable. 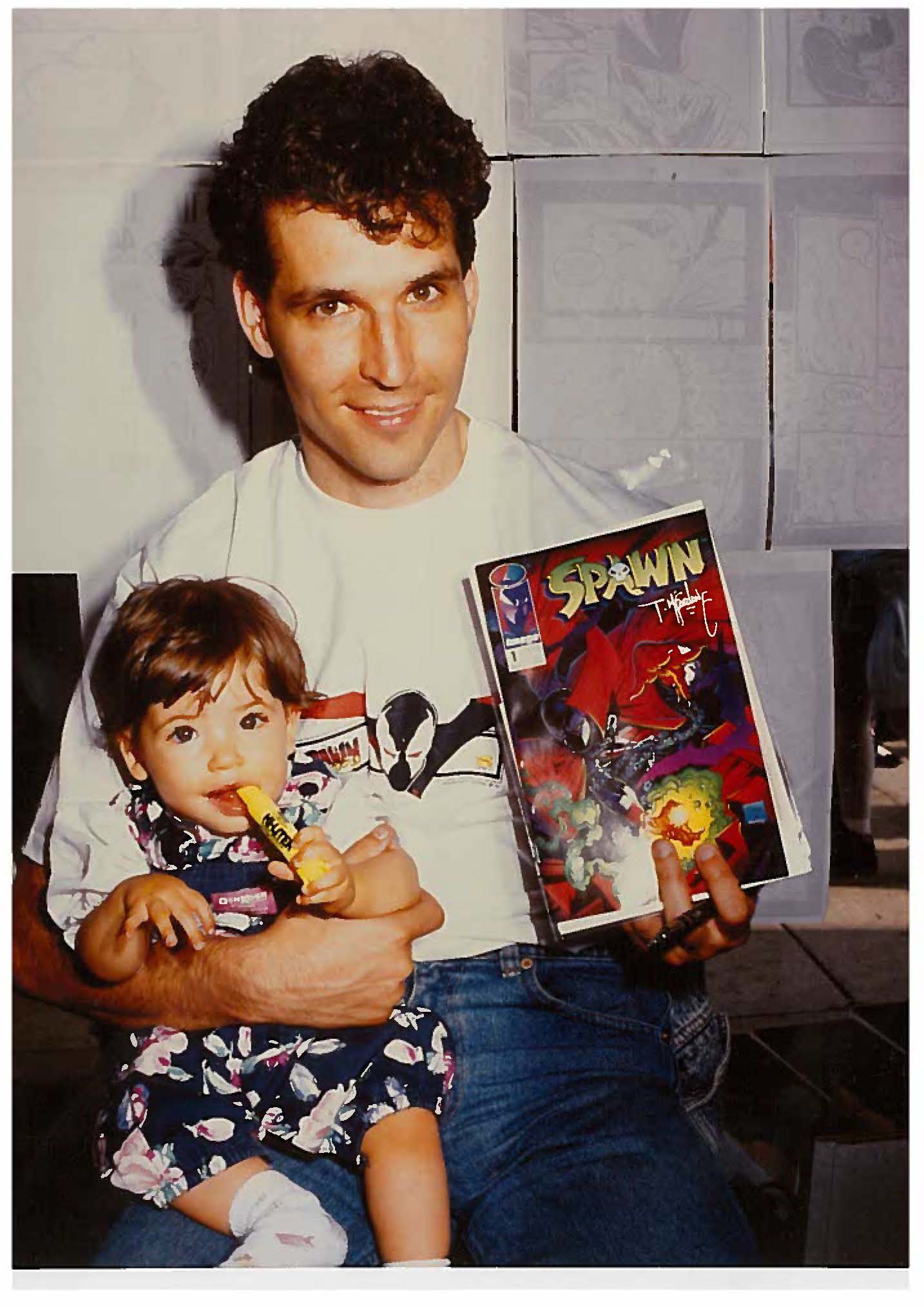 This man wants to sell you and your family a wholesome comic about a man who made a deal with the Devil and looks like his face is made of hamburger and is held together by shoelaces.

Those initial Spawn tales leaned hard into the early Image ethos: high on art, thin on story, and long on violence. But they worked. Fans couldn’t get enough of Al Simmons, Violator, Overt-Kill, and the whole wacky bunch. Then, to prove his cache, McFarlane pulled in industry luminaries Dave Sim, Alan Moore, Neil Gaiman, and Frank Miller for one-shot turns at writing issues 8-11. Suddenly, nobody was snickering – this Todd guy meant business, and damned if he wasn’t going to bring along some of the industry’s loudest voices for creator rights with him to back his play. Greg Capullo, then relatively new in his career at that point, inarguably became the superstar he is today when he took the artistic reins from McFarlane beginning in issue sixteen. Capullo would be the series regular artist (with a few issues by Tony Daniel or others here and there) until issue 100. And nothing controversial would ever result from this issue.

A short two years later we would see the launch of McFarlane Toy’s first line hit the shelves. Its earliest releases were under the Todd Toys banner, but that was swiftly changed to McFarlane Toys when Mattel threatened to sue over the perceived appropriation of “Todd” from their Barbie line. Spawn action figures have arrived, albeit bereft of the famous kung-fu grip. Over the years, McFarlane Toys has become synonymous with high-quality, spectacularly-detailed action figures from across all genres, from cult classic hockey movies like Slapshot to Austin Powers to Batman and everything in-between. 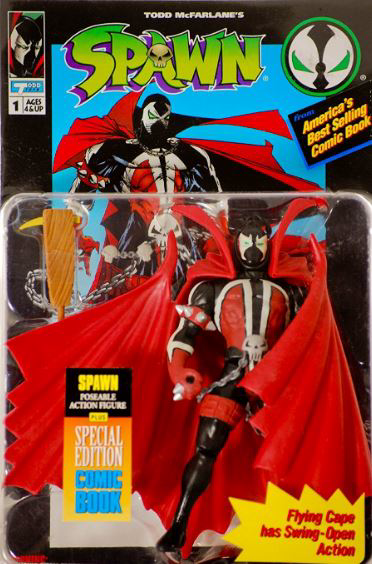 Spawn-mania struck in full force throughout those heady early years of Image, and arguably outlasted the collector’s bubble, which peaked and burst around 1994-95. That’s the sign of a quality product. There’s a fair argument to be made that Spawn’s popularity peaked in 1997 with the release of his major motion picture. Starring Michael Jai White as the titular antihero and guest-starring Martin Sheen and John Leguizamo as the film’s heavies, Spawn was ultimately a box office flop both commercially and critically. Billed with the tagline, “The Special Effects Movie Event of the Year!”, Spawn represented what most felt was a quickie attempt to cash in on a hot property in order to earn a quick buck. Spawn became a punchline for the what happens when Hollywood got their grubby mitts on fans’ beloved comics properties without understanding their appeal. And Spawn, the comic, was never the same after its infamous box office bomb: sales steadily started to plummet, and for many, it seemed the writing was on the wall for McFarlane’s signature creation – and a flagship title of the Image line. 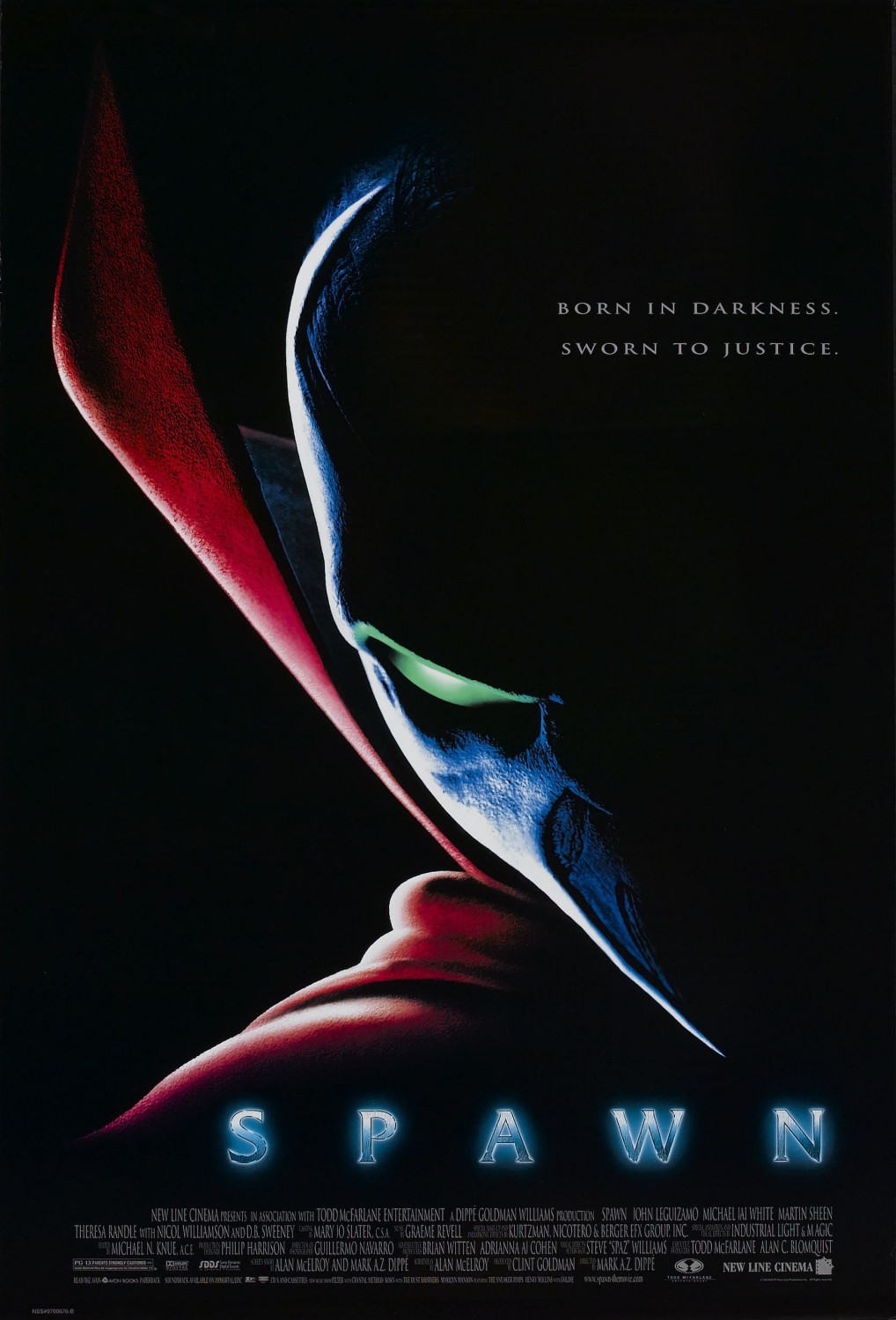 A new film version starring Jamie Foxx is in preproduction now. For all its faults, Spawn’s movie iteration has its fans, and an argument could be made that it was filmed before special effects could match McFarlane’s vision.

But then a funny thing happened. 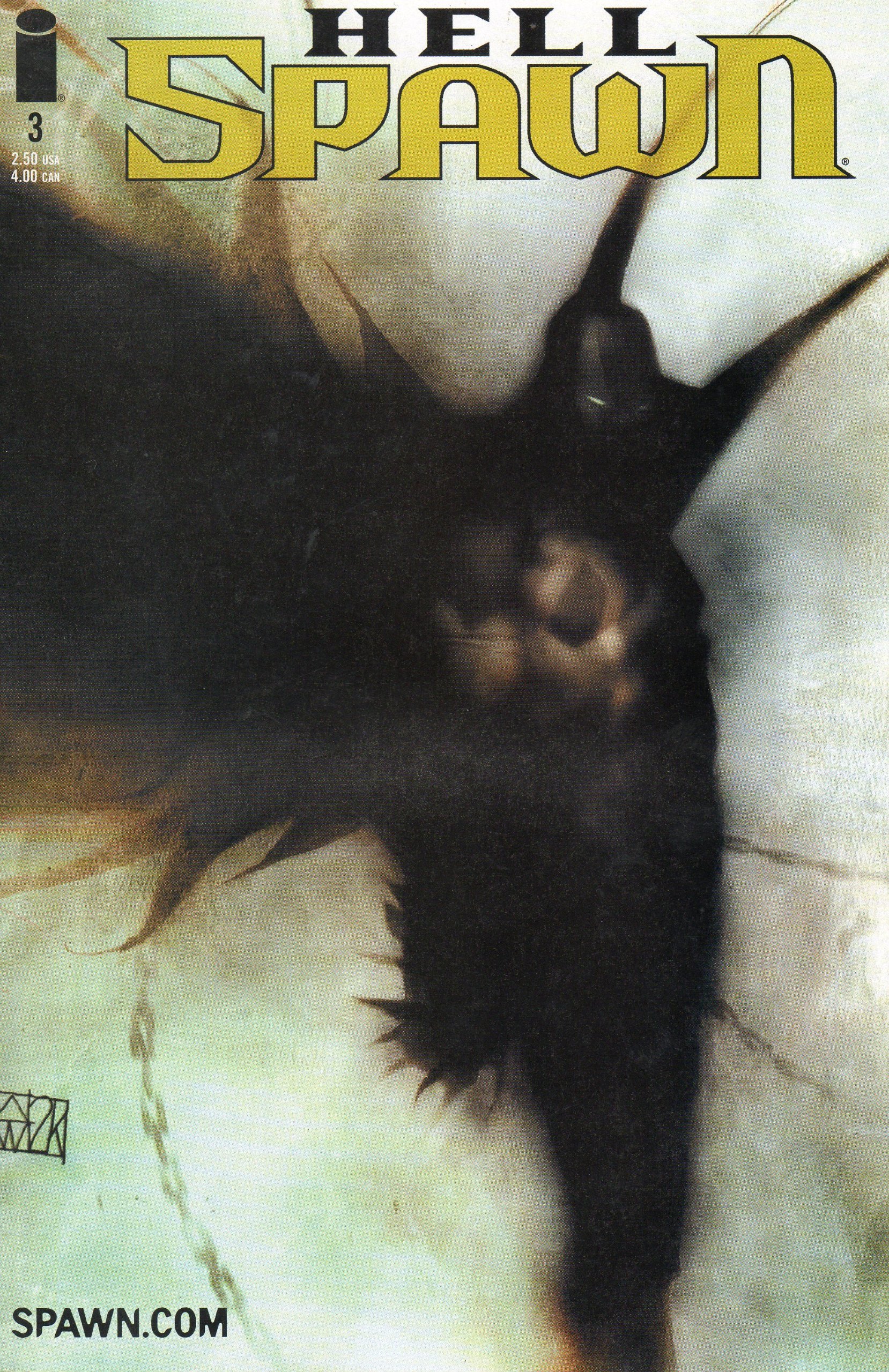 Spawn, all growed up.

As the years and issues would go on, Spawn and his world continued to grow, change, and mature. The spinoff Hellspawn with dark, moody painted art by Ashley Wood brought some much-needed maturity and creative cache to what many saw as a relic of a passing era; Sam & Twitch would add to then-ascending writer Brian Michael Bendis’ rising star. McFarlane would eventually cede the writing duties of the main title to other writers like Brian Holguin, David Hine, Paul Jenkins, and more. Sales would drop far below their ’90s excesses, but they would then hold steady. When no one was looking, Spawn quietly morphed into a cult-favorite antihero comic to a dark and blood-curdling horror comic. 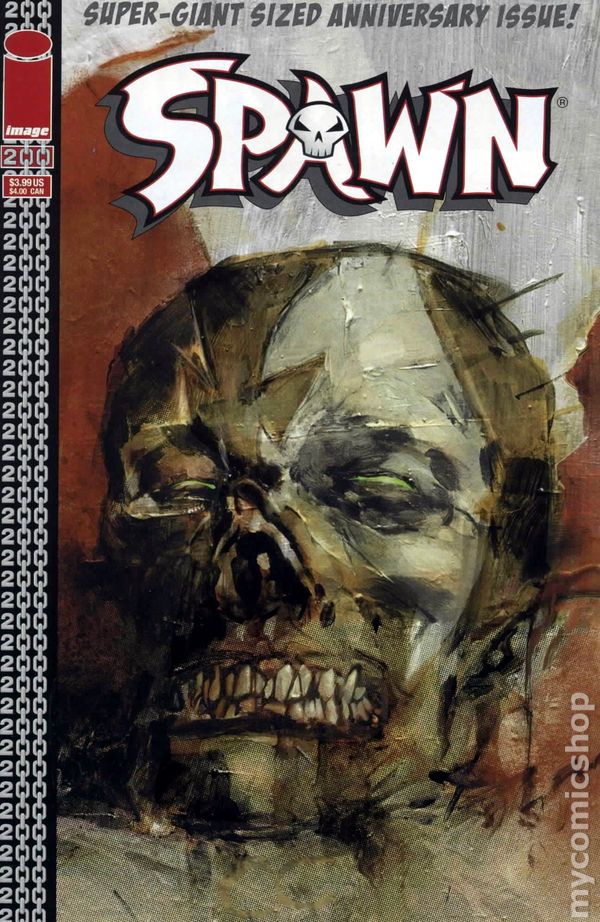 Not your dad’s Spawn!

Comics, and time, changed. McFarlane was a deft enough creator and businessman to know that his signature creation had to grow up too.

However, he hasn’t been immune from the occasional controversies. Hockey player Tony Twist sued for copyright infringement, and for years, he wrestled in court with Neil Gaiman over the ownership of Gaiman’s Angela character, who debuted in the above Spawn #9. McFarlane had to pay the fiddler for some creative decisions that didn’t go in his favor. However, it’s safe to say he rebounded like Dennis Rodman in the NBA Finals and has been doing just fine ever since. Plus, a little controversy never hurts.

So fine in fact that thirty years later, Spawn is celebrating over 300 issues and a brand-new universe revolving around him. There’s been a renewed interest in Al Simmons that hasn’t been seen since the ’90s, both in terms of hype and sales. Spawn as a character, storyline, and universe aren’t for everyone. He’s a character that is highly celebrated, a pinnacle of a particular time and place in comics history, and whose importance in the industry is argued in many circles. And – along with Savage Dragon – is the only flagship Image title that has been published continuously since its inception. Not bad for a guy who started life as a pawn of Hell.

Tune in next week for Image30 chapter three: SAVAGE DRAGON!

And for last week’s opening chapter on Youngblood, click here.