Image30 Chapter 24: POWERS Arrived, and Word Balloons Would Never Be the Same 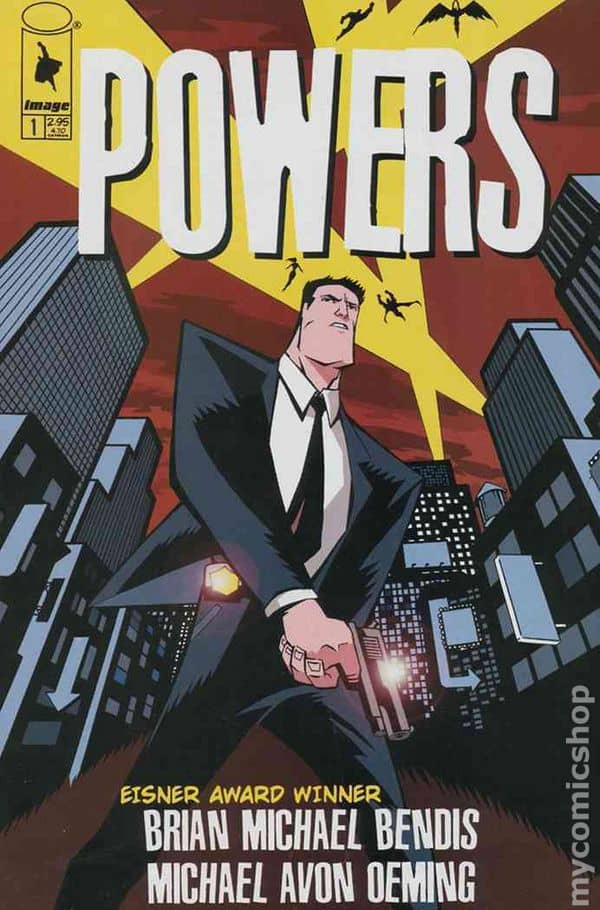 Powers didn’t quite come out of nowhere in April 2000, but in terms of industry impact, it more or less could have. Writer Brian Michael Bendis had been hustling in the indie scene since 1993, when his first work Fire was published by Caliber Comics. It was followed by A.K.A. Goldfish and Jinx, which established his keen ear for David Mamet-style rat-a-tat-tat dialogue, strong character work, and street-level crime noir more informed by TV shows like Homicide than Mickey Spillane. Everyone in Bendis’s crime comics operated in shades of gray and were on the margins of society, just like good crime character should. His underground work attracted the attention of one Todd McFarlane, who invited him to join the Image fold writing Sam and Twitch and Hellspawn, as well as re-releasing Jinx through to a wider audience through trade paperback form. In 1998 came the true crime miniseries Torso, about Elliot Ness’ failed attempt to catch a serial killer in Cleveland in the 1930s. It won an Eisner award the following year for Comic Book Excellence, Talent Deserving of Wider Recognition. This Bendis guy was clearly a talent to keep an eye on… but few were there. Yet. 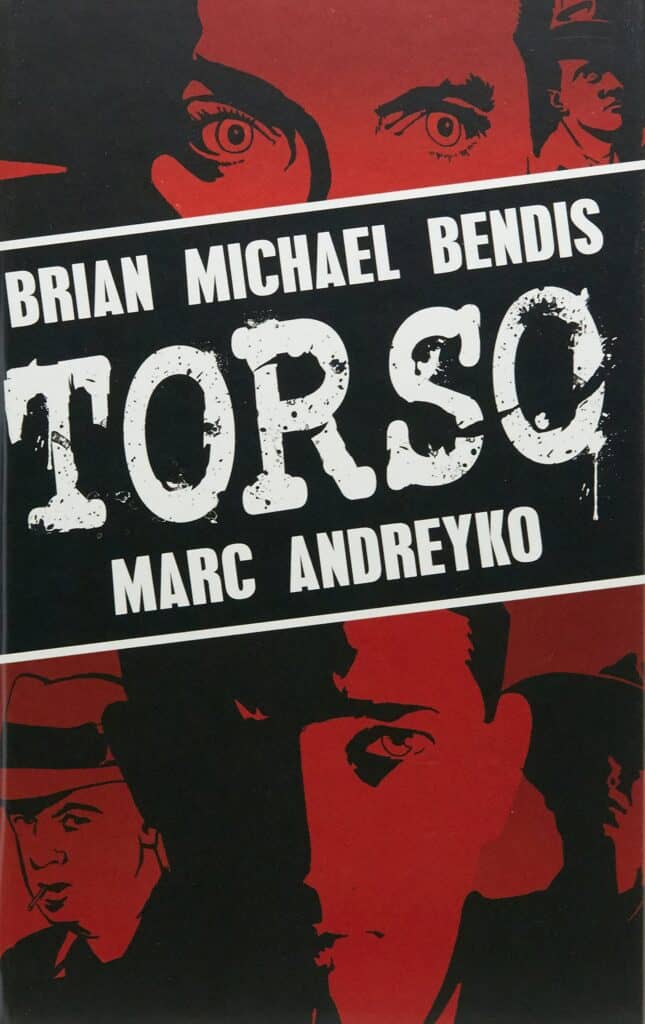 Torso, by Bendis and Marc Andreyko. Read it.

They soon would be.

The elements were all in place for Bendis to have his breakout hit, and it came with Powers. Taking a police procedural and placing it in a world filled with superhumans, Powers hit the industry like an atom bomb. If Rising Stars had been the launchpad for a new Image for the 21st century, Powers was the rocket that blasted into the unknown.

It wasn’t just the concept that made Powers hit with a strident sense of urgency, though. Comics were changing, and not just in terms of content. Swiftly fading into yesteryear were the clunky, unnatural dialogue exposition dumps of old. In their place was naturalistic conversation more informed by film than anything else – something Bendis took to heart, and his signature dialogue style was (and still is) full of tics, starts, stops, incomplete sentences, and awkward pauses – just like real-life conversation. 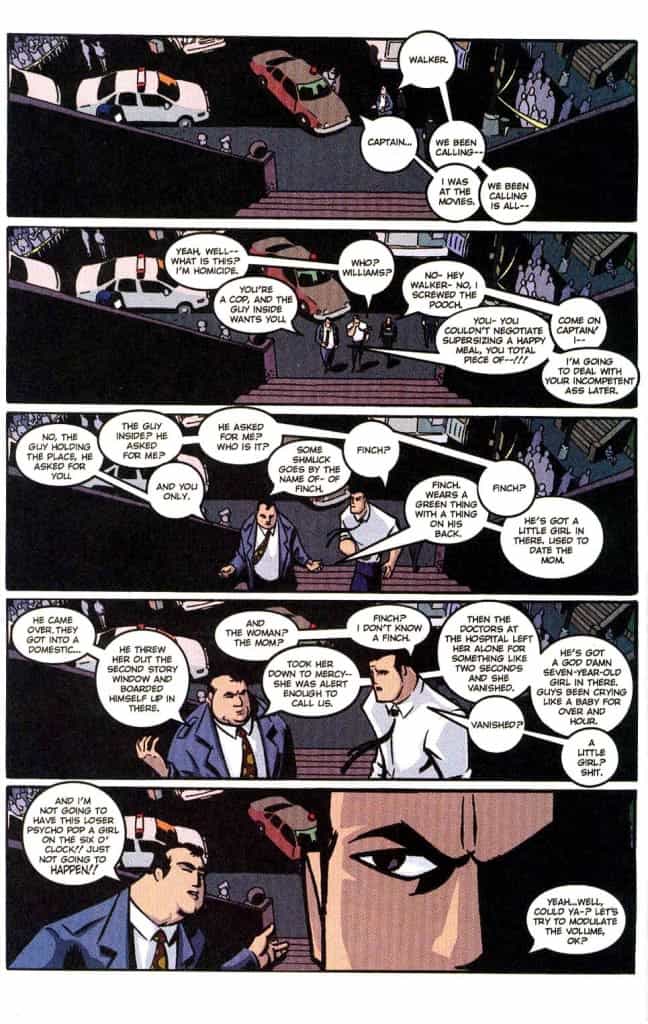 There will be many, many more pages like this in Bendis’ future.

It wasn’t just Bendis’ unique ear for dialogue that signaled the changing of the generational guard in comics, though. He was an early adopter of decompressed storytelling, and along with Mark Millar, arguably took it mainstream. Whereas traditional comics storytelling took a panel-to-panel approach, decompressed storytelling took a more cinematic scene-to-scene approach – meaning, in a given issue, it could potentially feel like not much happened, until the story was complete and could be read in one sitting. Pace and mood were everything. Decompressed storytelling also presaged the rise of “wait for the trade” fans, more interested in the aesthetic and artistic experience of the story rather than collecting the single issues. The technique has its fair share of detractors (largely cranky older fans), but it absolutely became the default storytelling mode in comics writ large for a good decade and change.

There was a tone, too, that set Powers apart. Powers was adult, not dissimilar to an HBO show (serendipitously, it arrived around the same time that HBO smash The Sopranos ushered in the age of peak TV) instead of the more juvenile take on what being “adult” meant in comics the previous decade: T&A. Powers was a comic about adult characters with adult attitudes and adult worldviews doing adult things. They punched the clock and went on about their lives. Officers Christian Walker and Deena Pilgrim looked and felt and acted like real people with sex lives, trauma, insecurities, frustrations, and all the traits that make people, people. In other words, the characters felt real. 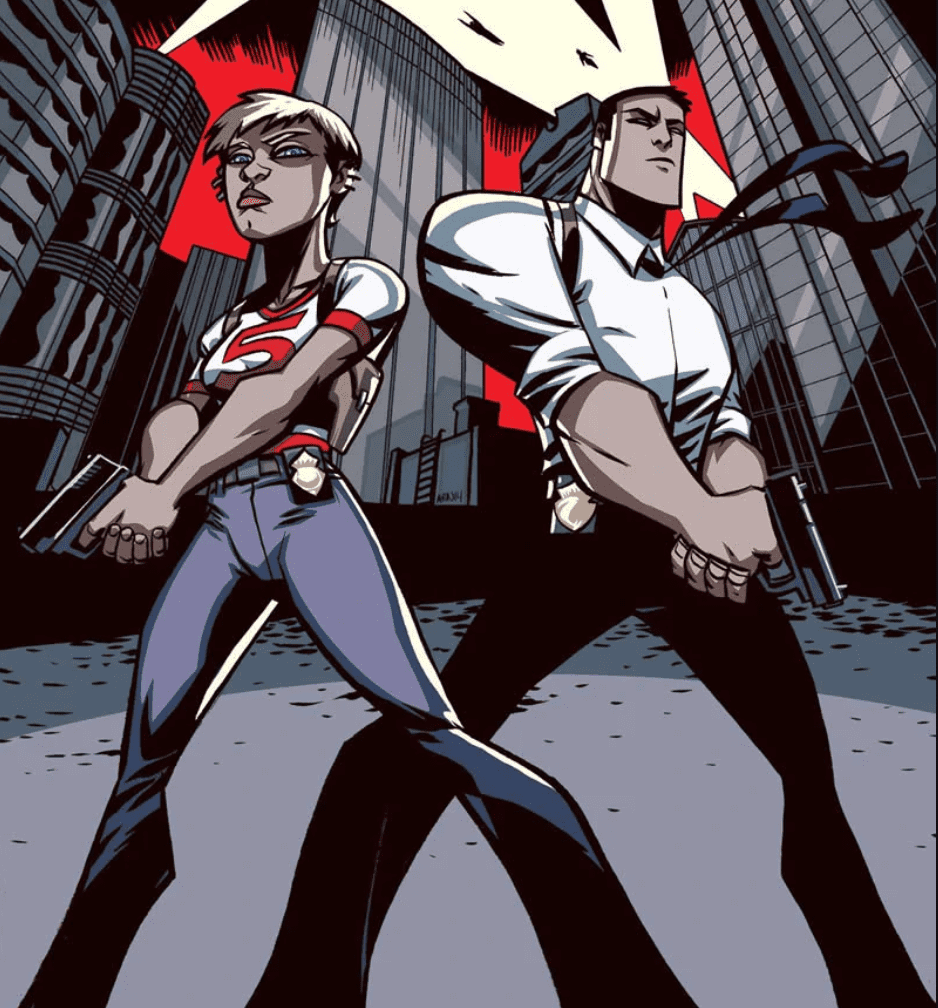 You only wish you were this cool.

The opening arc, “Who Killed Retro Girl?”, established the world of the comic with huge skill. There’s a ton of information crammed into those first six issues, but it’s never done in a way that hits the reader over the head with an info dump. Instead, Bendis wisely lets the readers put the details together for themselves: Walker and Pilgrim are regular (-ish) police, specifically working cases involving “powers,” as the superpowered are colloquially known. And just like the main characters themselves, the heroes and villains are often just as human: petty, neurotic, weary, thin-skinned. Treating the capes-and-tights set as just as human as anyone else was another key ingredient that set Powers apart in those early years – they weren’t being deconstructed for a post-Watchmen world anymore. They were just people, warts and all. 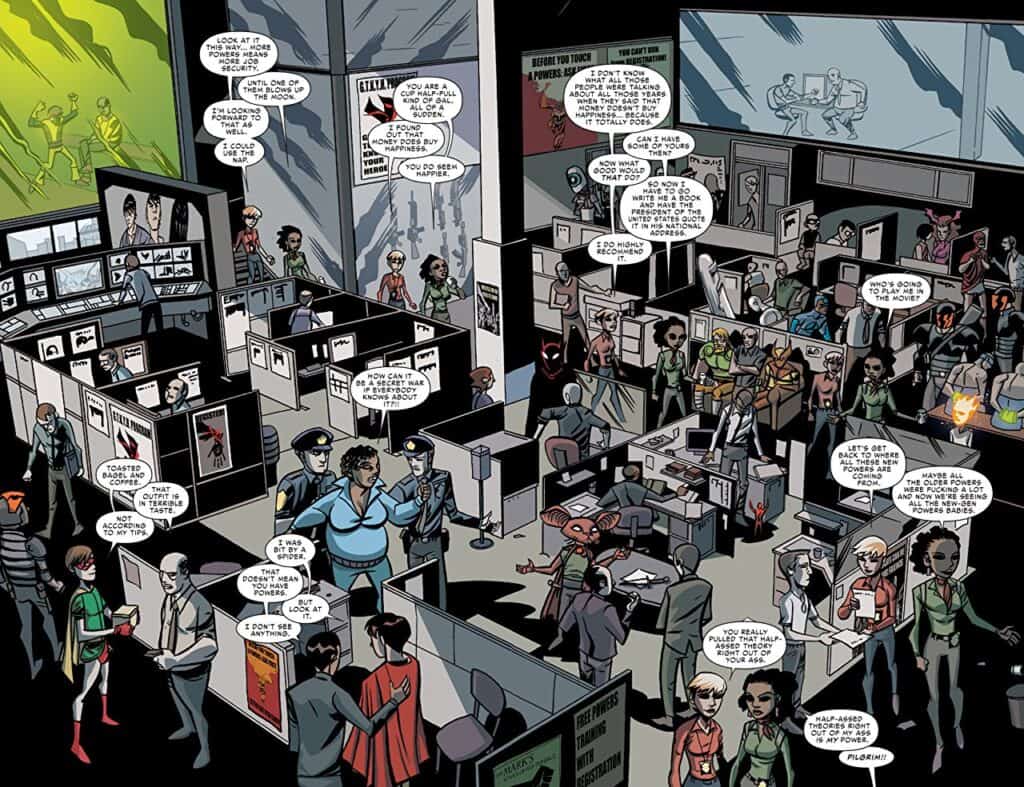 Despite all of Bendis’ great groundwork he laid out, it wouldn’t work as well by half if not for his artistic partner in crime, Michael Avon Oeming. Oeming had been garnering an irregular number of mostly inking jobs for several years, but not enough to make a career out of it – in fact, by his own admission in the Powers: The Best Ever afterward he wrote, he’d been on the cusp of calling it quits in the industry altogether when he landed the Powers gig. It’s fortuitous he didn’t: along with Phil Hester and a handful of others, Oeming’s arrival announced a shift in mainstream comics art, focusing less on crisp, clean lines and rippling physiques and more on solid, unfussy and impactful linework that owes vastly more to Bruce Timm or Alex Toth than Neal Adams or Jim Lee. And the fact that Oeming’s cartoony art style stood in contrast to the darker nature of Powers‘ standard fare made it all the more impactful: 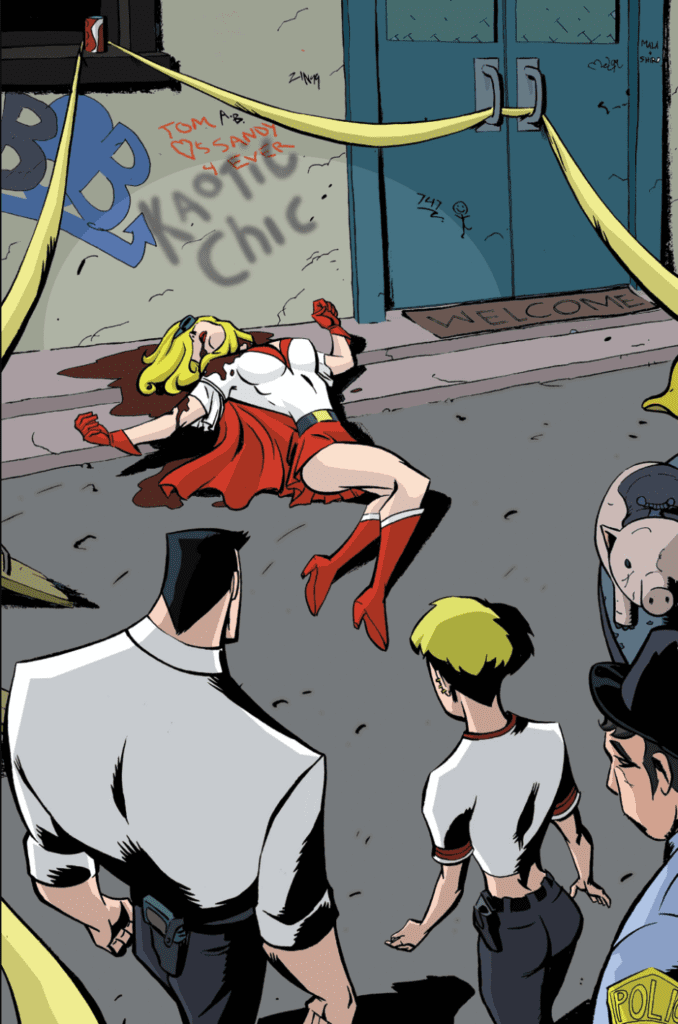 The simple, elegant lines of Oeming’s work enhances its impact.

Like all of comics’ best duos, Bendis and Oeming just clicked. Lee and Kirby, O’Neil and Adams, Wolfman and Perez, Claremont and Byrne – and now, Bendis and Oeming. The two and their signature creation took the world of comics by storm, though not overnight: sales were shaky for the first two issues, but continued to grow until peaking at between 25,000-30,000 around issue fourteen. By that time, it was the hot comic, and the issues couldn’t come out fast enough. Bendis and Oeming were quickly in high demand throughout the industry; the former was quickly scooped up by Marvel to launch its new Ultimate line with Ultimate Spider-Man and then its R-rated MAX imprint with Alias, introducing the world to Jessica Jones and giving Marvel its first-ever comic with an F-bomb in it (in its first panel, no less). While Bendis blew up and became A-list, Oeming kept it somewhat lower key, lending his not-inconsiderable talents to works at Dark Horse, Oni, Marvel, other Image books such as The Mice Templar. He also flexed his writing muscles, too, and proved a formidable talent in that regard as well.

Powers would continue until 2020, through no less than three different publishers: first Image until 2004, then Marvel’s Icon imprint for creator-owned works. The move made business sense at the time, seeing as Bendis was by then the House of Ideas’ golden child, and was about to embark on a 230-issue run of Avengers comics that completely redefined the line. Powers volume two would launch from there, followed by a third volume in 2009 and a fourth, subtitled Bureau (as much of the action had shifted to the FBI). A fifth volume started in 2015 but sputtered out after eight issues, as Bendis was in the process by then of moving the property and all of his miscellaneous Jinxworld comics to a new deal with Dark Horse. Interestingly, though Bendis would leave Marvel to sign an exclusive with DC in 2016, Oeming and he retained ownership of Powers, and briefly, all the various collections of the series were published through them under the Jinxworld banner. Powers‘ final bow came in 2020 with the Dark Horse publication of The Best Ever, which concluded Christian Walker’s story – and that of his world – in a satisfying, thrilling way that granted a genuine sense of closure – a rarity in comics.

Nobody could have predicted that Powers would become a Little Comic That Could back in 2000, though. It was like nothing Image had published before – even Torso had been a miniseries, and was an historical fiction – but the gamble in publishing it paid huge dividends not just for the creators, not just for Image, but for the industry writ large as well. Without it, 21st century comics would look a lot different because of its domino effect. But with it, the tapestry of how comics read, looked, and overall felt, was permanently impacted. A new paradigm in sequential storytelling had arrived, and it was Image that had lead the way.

NEXT: Some guy named Robert Kirkman hit the jackpot with INVINCIBLE, an earnest superhero comic with some serious clout – as Image continued to reinvent itself.

Image30 Chapter 24: POWERS Arrived, and Word Balloons Would Never Be the Same