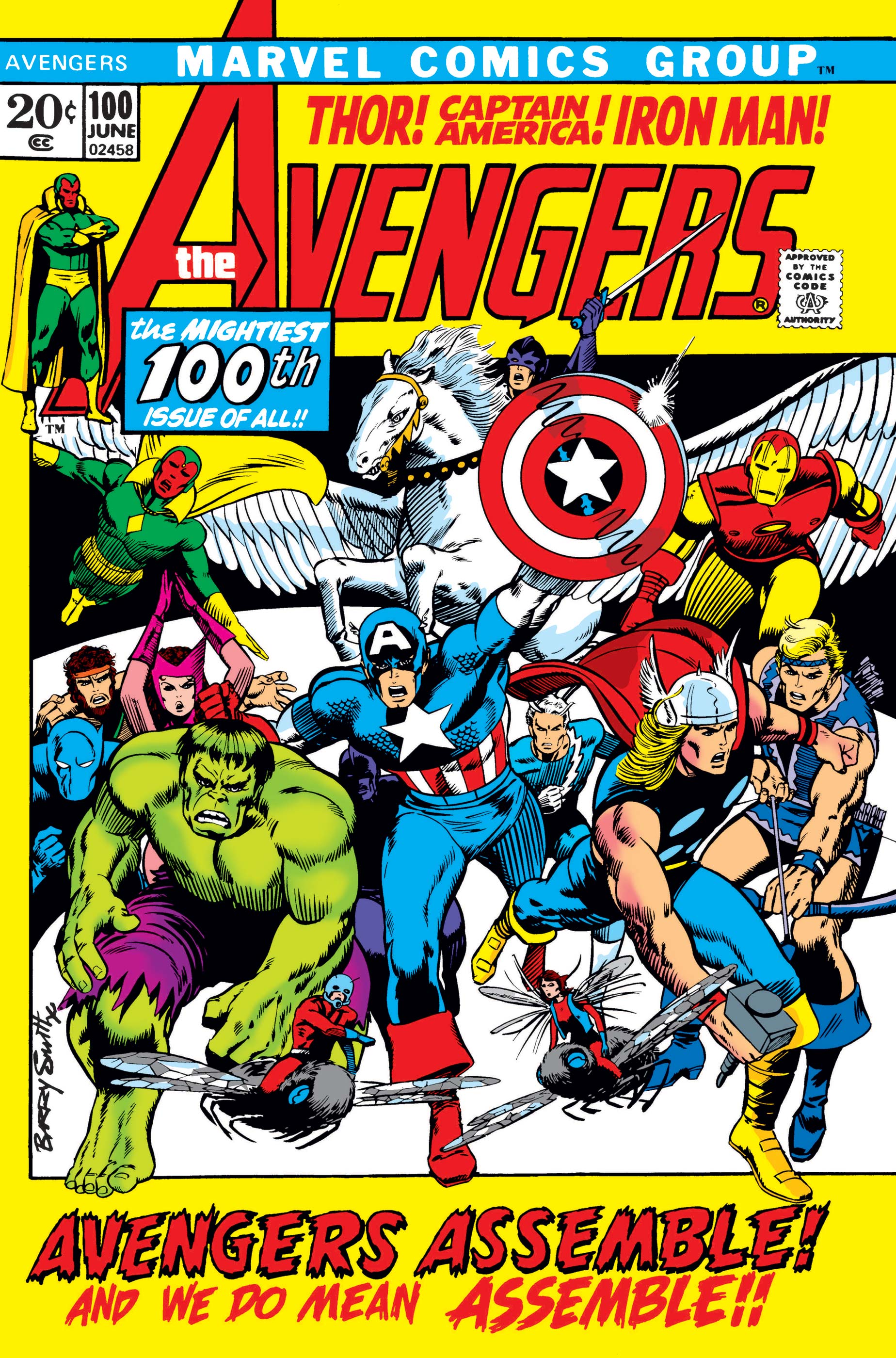 The Battle of Helms Deep. The Battle of Yavin. Throughout history, there have been monumental battles that have taken their place in history. Weapons, strategy, experience, and powerful magic portals are all ingredients that make for a great menu of warfare. Wait, portals? YES! PORTALS!

Welcome to Avengers #100 (1972). A classic comic filled with the traditional comic tropes that we have come to know and love. Milestones in comics at one point in time (before legacy numbering came along and we weren’t getting “new first issues” every six months) were celebrated with big teams, big creators, and even bigger storylines. Avengers #100 is no exception to this. With a classic whose who line-up in Avenger lore; Captain America, Iron Man, Thor, Hulk, Vision, Scarlet Witch, Ant-Man, Wasp, Quicksilver, Black Panther, Hawkeye, and The Swordsman. Yes, The Swordsman. As this team of Earth’s Mightiest Heroes gathers, they are briefed by the Black Knight on Hercules’ kidnapping at the hands of Ares, who has plans for world domination and the destruction of the Avengers and any who will stand in his way. But wait, there’s more! Along for the ride and sitting shotgun is Asgard’s very own…the Enchantress. From panel to panel, the action never stops, and we get the occasional small smile and a laugh to go along.

The book reads like a train ride in the countryside of England while sipping a nice bourbon. The pacing is as brilliant as the non-stop action. Even as the team is split into two different factions to hopefully bolster thief efforts. The storytelling is a steady stream of what we have come to expect from classic issues such as this. The action kicks off when Dane summons the original Black Knight, who gives a detailed run-down on what has happened. And now that Ares has found the Knight’s black blade, all hell breaks loose once Enchantress lets him know the power he now wields. As the team splits and heads into battle, we are reminded why we love the Avengers.

There’s always been an aura around them, no matter what the line-up is. The Avengers are like pizza; it’s still pretty good even when it’s not the best. Throughout their history are tales and team-ups that stand the test of time. Classic stories told by giants of the industry. Speaking of which, this creative team is tops in every facet of the word. With the likes of Roy Thomas, Barry Windsor-Smith, and Joe Sinnott, along with the aforementioned cast of characters, Avengers #100 not only stands the test of time but is a great example of the era. A must-read.