It’s another day, and another Throwback Thursday article, where we’ll talk about Dr. Strange, Sorcerer Supreme #10, by co-writers Roy and Dann Thomas, and Jackson Guice as the artist. This is the second issue of a two issue arc, and the second arc of the Thomas’s and Guice run. Roy and Dann Thomas took over this book after Peter B. Gillis and Richard Case launched the book after the success of the bi-monthly anthology, Strange Tales, that featured stories about Strange, as well as the Cloak & Dagger duo. See, at the beginning of this series, the good Doctor was dead, or at least thought dead, after his (second) battle with Shuma Gorath, a creature straight out of Lovecraft, this primordial god was only vanquished by Strange using all of his magical might, as well as “destroying” his mystical artifacts to bind Shuma, and his life force, leaving the world to think that he was dead. In this new title, the good Doc. 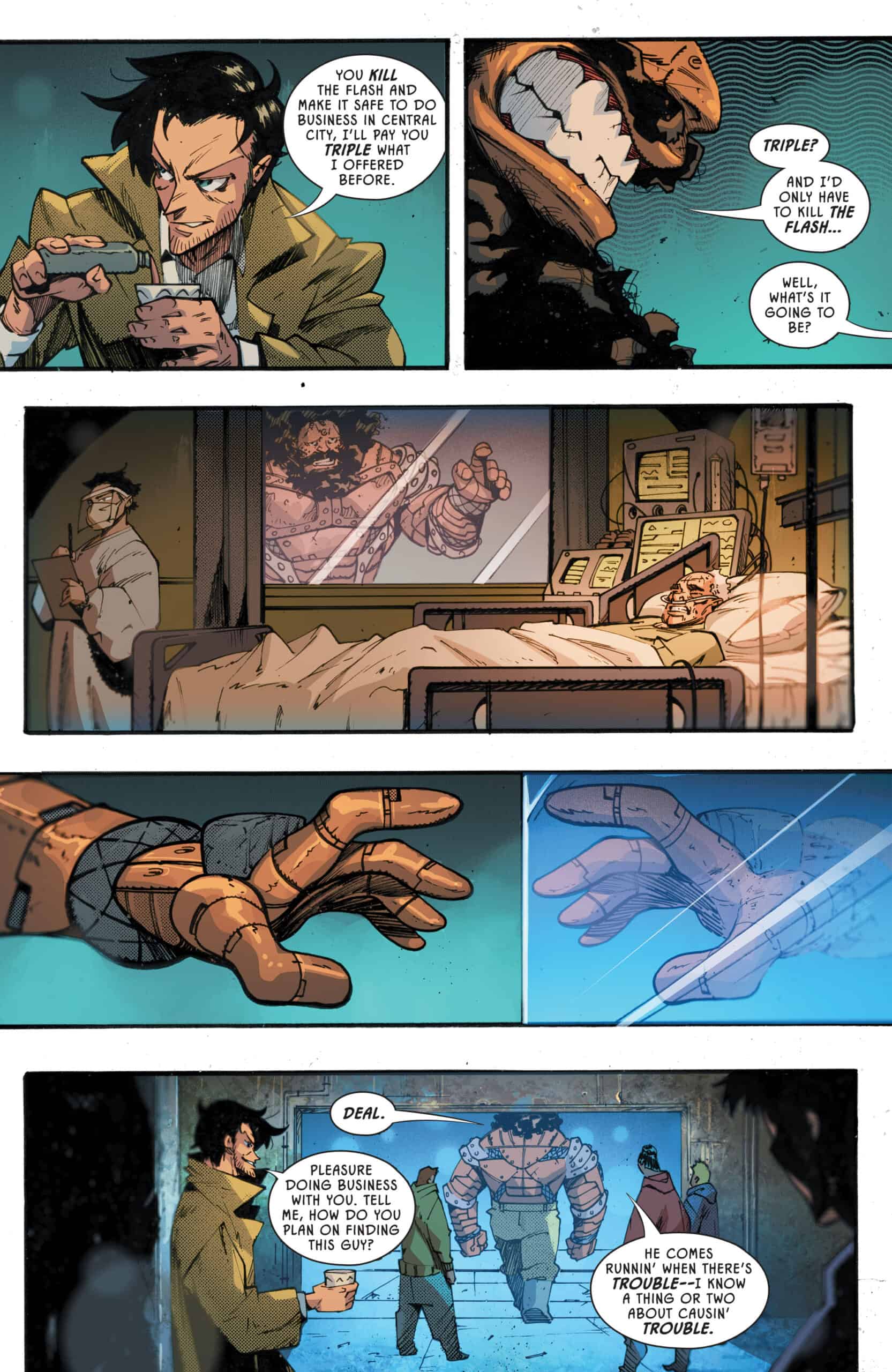 Rintrah’s back to become the Doc’s newest disciple!

After the original 4 issue arc, the current creative team would craft their own tale, bringing back Dr. Strange standard villains, Count Mordo, Mephisto, and Satannish, as well as introducing Mephisto’s daughter, Mephista (groan, I know) where Strange is forced to combat both of these lords of Hell, to save Mordo, who sold his soul to the both of them in order to obtain the power to finally defeat Strange. Didn’t work, because that’s not how comics work, and now we’re to the current arc. Strange’s former paramour, Morgana Blessing, decided to write a book, exposing all of Strange’s secrets, singing his praises, and letting the world know exactly what he’s done to save everyone from complete destruction. 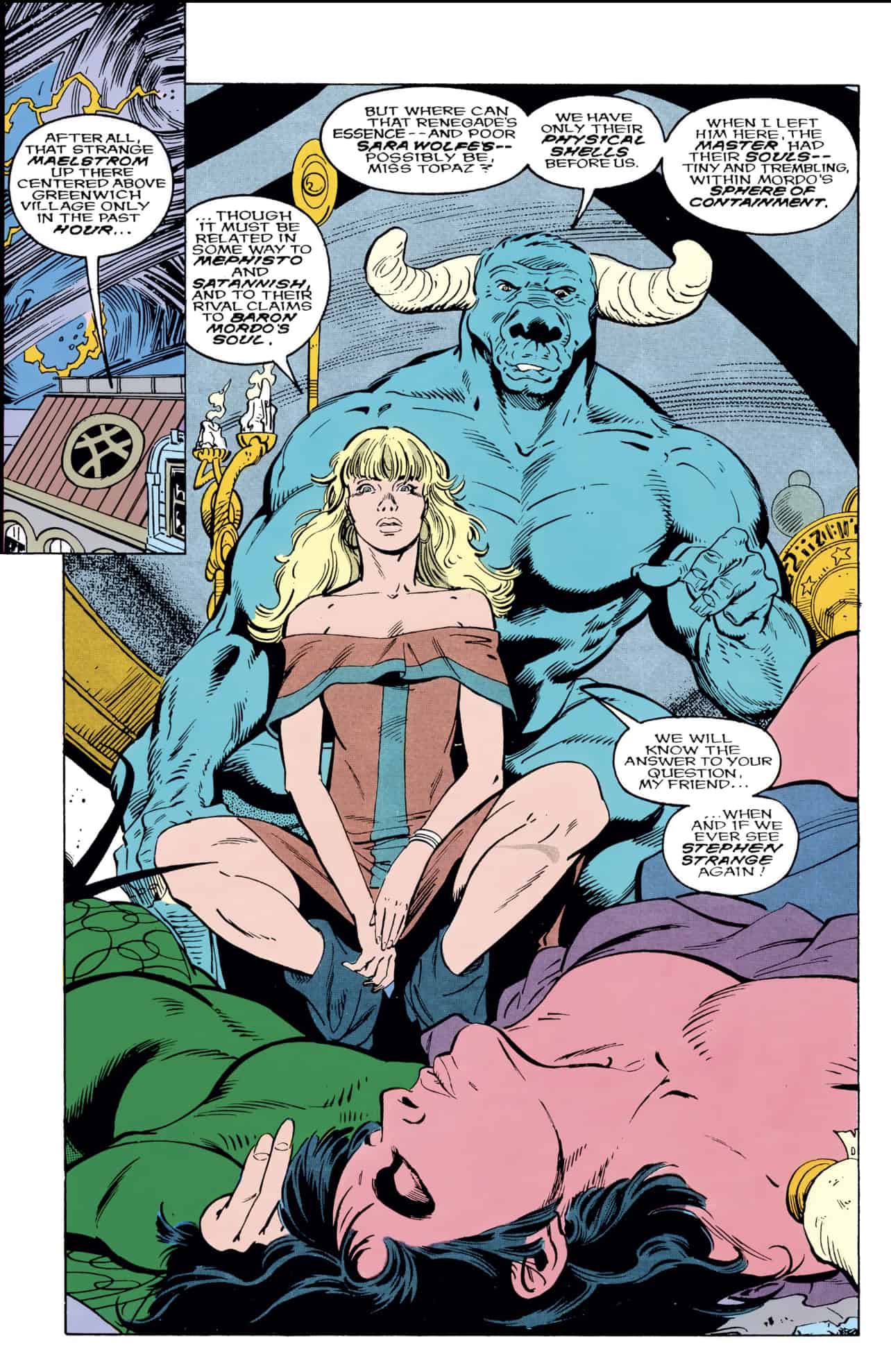 Forget Clea, these are the new dream team.

After ending things rather badly between the two, Strange is attacked by Morbius, an on-again, off-again Spider-Man rogue, and future Midnight Son, who is a living vampire, which threw Strange off, because he and the Scarlet Witch destroyed all of the vampires in the now classic Dr. Strange: the Montesi Formula, by Roger Stern and Dan Green (grab it. Probably one of the best Strange tales from the 80’s). Not only did Morbius throw Strange off, but that of his own brother, Victor, who is also a vampire, so Strange is doubly confused. How can his brother and Morbius still be vampires? Well, this is all settling up the next big arc, the Vampire Verses (another potential arc for a throwback article), and the return of vampires to the Marvel U.

So let’s get down to the issue, shall we? To start off, the Thomas’s seem to focus on making Strange more glib, and flippant, using slang in the scripts, trying to make the characters, and their world less of some impenetrable mythology that tends to be used to describe Strange. Much like Thor, Doctor Strange is one of those characters that can be difficult in coming up with threads that can prove to be a legitimate threat against, and like Thor, Strange is one of those characters that everyone wants to get a chance to work on. Unfortunately, unlike Thor, creators seem to have a hard time making him accessible enough to new readers. I mean, I’m a huge Strange fan. I have almost every single Strange solo comic since the his short run in Marvel Premiere in the early ‘70s (long before I was even born!), so I’m willing to give a lot to enjoy a Dr. Strange book.

Roy Thomas is one of those writers who has a deep love and understanding of the Marvel universe. Hell, he wrote half of it, and is responsible for some of them, like the Kree/Skrull War, the revitalization of the X-Men, with artist Neal Adams, as well as his run on Conan, that continues to be a creative high point for the company, even with all of this, he also wrote Dr. Strange at the end of his original series. His final story ended up being the story that would move to the ongoing Namor title at the time, and would be the setup that would become the framework that would become the original Defenders title, so him coming back to Strange seemed like a sure fire hit, unfortunately like much of his other work after returning to Marvel, left much to be desired. Don’t get me wrong, this run was quite enjoyable, and definitely improved as time went on, but it just seemed to take a couple arcs before it clicked, but this issue is the one that started to click with me. 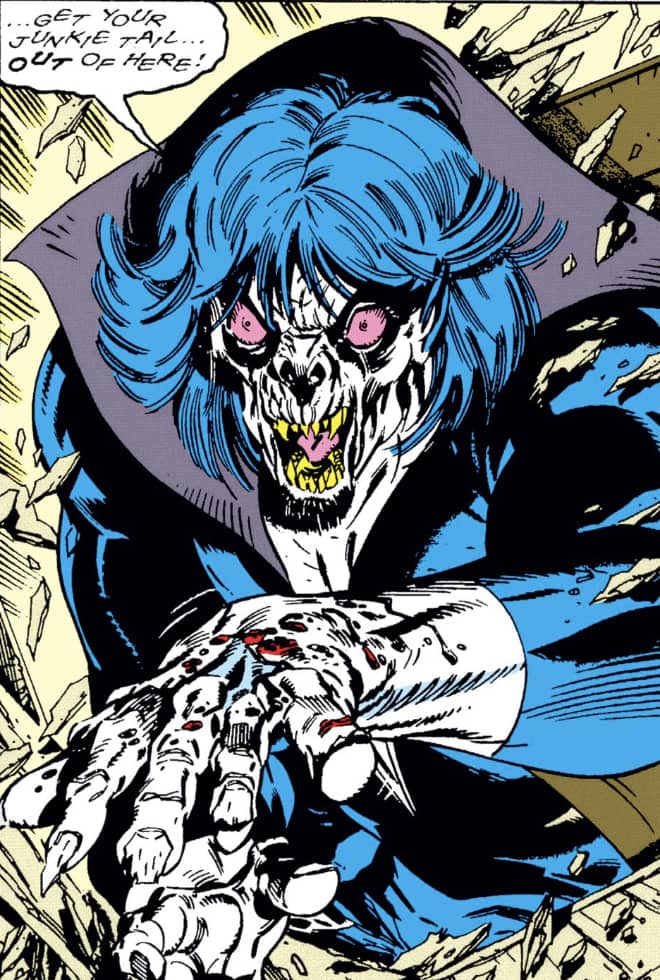 Hope you’re ready for the bloodbath!

It’s Thomas’s turn from less magic superhero, to the darker, more horror tinged stories, that seemed to be the winning formula for this book, unfortunately it’s an uneven take, that would slip in and out of the superhero/horror genres that seemed like the biggest hurdles this series had to deal with. I feel had the Thomas’s gave us a horror comic that was more like the Hellstorm Prince of Lies series, we’d get a book that wouldn’t be afraid to touch on themes that could possibly create a line like Vertigo for the Marvel universe, but I don’t think Marvel at the time was ready for an imprint like that. Since Ike Pearlman’s takeover, Marvel was in the business to make as much money as possible, so they wanted to create comics that would bring in as many dollars as possible, unfortunately this take would keep themes that could be told to an older audience, but shy away from the flat colored comics they were used to producing. 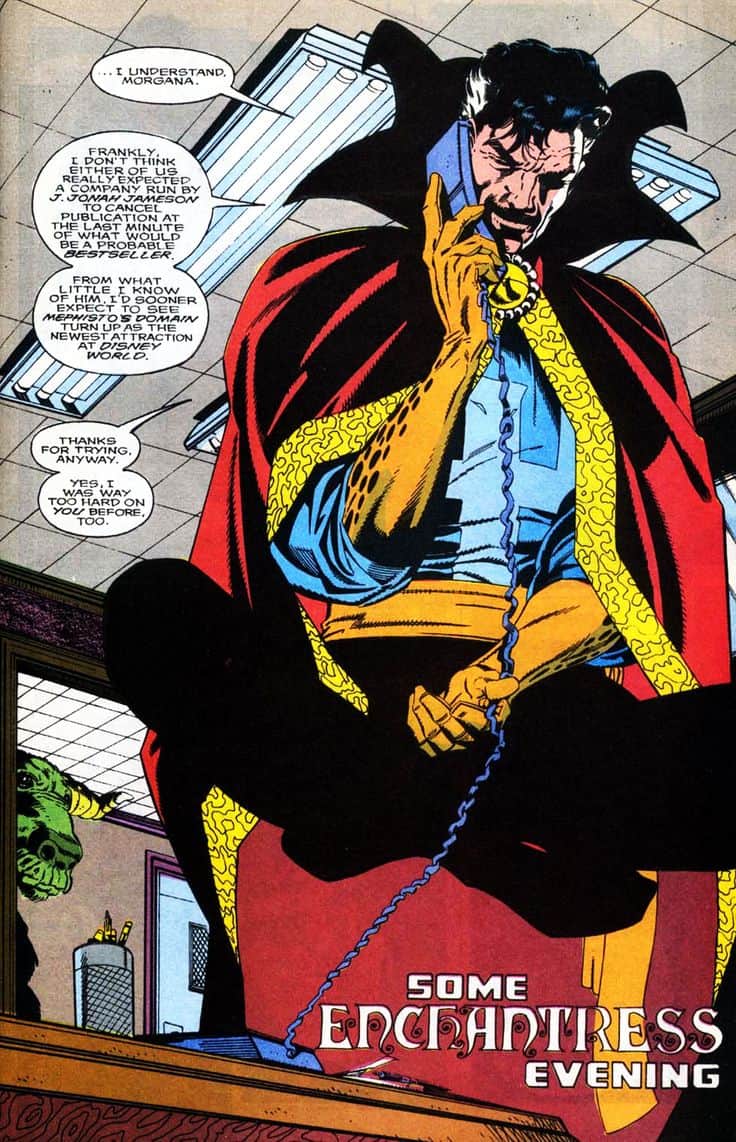 Jackson Guice is one of those artists who have been everywhere. Getting his start at Marvel on the licensed property, the Micronauts, with prolific writer, Bill Mantlo, Guice would go on to work on projects like the Flash for DC, the New Mutants, Iron Man, and on, and on, so getting him on here was a bit of a coup. At this period of Guice’s work, he was known for his big, bombastic storytelling. He drew heroes as you’d think heroes should look. Full of life, and energy. Not always the flashiest, but an artist who would come on a book, and make the title his, and that’s what he did here. Strange was bulkier, and had a more youthful appearance here, but that was explained away as Strange needing to build some muscle to make him a stronger, more formidable sorcerer, against the threats that only he could deal with. He also gave characters, like Topaz, and Clea, more of a modern aesthetic than what we were used to seeing. Plus his Rintrah would become a personal favorite character of mine during this era. His monsters began as rather…basic, but as time went on, his horror became darker, and more sinister. The monsters looked more nightmarish, so his take on Morbius here was the correct amount of horror and capes and masks that was needed. Guice’s take would be the inspiration that Marvel would use when they started to build their horror line, the Midnight Sons, so a lot of what we got can be seen here. Guice’s evolution on this book would show just a hint of what he could do, and for that, I’d say he was here at the right time.