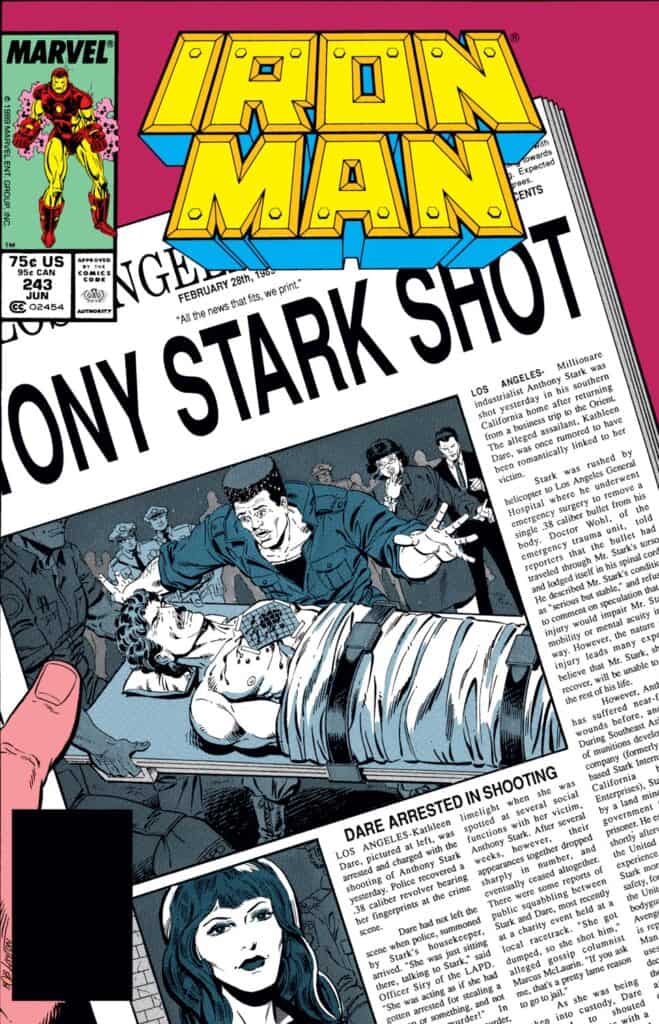 By 1989, both Iron Man the comic and Iron Man the character were riding high. The decade had seen arguably Tony Stark’s creative peak, as the post-Demon in a Bottle David Michelinie/Bob Layton era continued to redefine the character, followed by Denny O’Neil’s storied run that brought Tony to his lowest point and introduced Obadiah Stane, the Iron Monger (you know, Jeff Bridges from Iron Man 1). How on earth do you top that? Well, if you’re Marvel, you get the band back together, so in 1987, Michelinie and Layton were called back in to iron duty for a second run on the character they made great.

What’s interesting about that second run, though, is that outside of “Armor Wars,” you don’t really hear nearly as much about it. That’s a shame, because “Armor Wars” might actually be the least interesting part of their second run, despite being the most well-known (and subject of a future Disney+ MCU miniseries). By Michelinie’s own admission, “Armor Wars” was pieced together because Marvel honcho Jim Shooter told him that the company wasn’t advertising their run more (read: at all) because they weren’t giving anything “big” enough to advertise for, which is hot nonsense, but exactly the beancounter-focused direction comics were heading as the ’80s became the ’90s and the collectors bubble was starting to engorge.

Iron Man #215-250, Michelinie and Layton’s second run, is admittedly a bit lower-key than their original tenure, but honestly, how could it not be? By introducing Tony Stark as an alcoholic, the pair had redefined the character and his world, giving him a far more relatable trademark Marvel leading-character flaw than, “Well crap he has shrapnel in his heart but he’s rich.” Michelinie and Layton were smart enough to know better than to try. For the creators, a second run could have been a victory lap, and limply hit on familiar themes, and it probably would have been a decent-enough success both creatively and sales-wise. Instead, they went back to basics in a whole other way, by examining another aspect of Tony Stark’s bigger-than-life personality: his wealth, its consequences, and the responsibilities that come with it.

Stark’s wealth enabled him to have his own company, which in turn funded his ability to be the high-tech and not-inexpensive hero Iron Man. That tech getting out in the world was the impetus for “Armor Wars,” as Tony strove to round up all his extant armors worldwide from villain and hero alike, consequences be damned (Tony behaves really, really irresponsibly in “Armor Wars”). But another aspect of Tony Stark – enabled, at least in part, by his vast wealth, which allowed him to woo many a would-be girlfriend… time and time again. Much like his casual drinking prior to “Demon in a Bottle,” Stark’s womanizing had simply always been there, a perk of his wealthy persona, glamorized at best and treated with nonchalance at worst.

All of that changed as Michelinie and Layton’s second Iron Man run started toward its home stretch. Shortly after “Armor Wars” (which ran from issues 225-232), Tony was smitten by one Kathy Dare, merely the latest in his seemingly-endless succession of boudoir conquests. She was sweet, a bit airheaded, immature, and a little materialistic. Tony treated her with a sort of absent-minded sense of convenience; he didn’t mind her being there when she was, but otherwise had little time for her antics when he was busy with other rich-guy things. Her unhealthy, codependent behavior soon caused Tony to break things off with her, but again and again she came around.. and what started as a mild annoyance steadily grew more and more desperate, as Kathy began overtly stalking Tony, escalating into increasingly intrusive and destructive behavior. The signs were there that there was more than a bad breakup stirring with Kathy Dare, but Tony was oblivious to any actual danger she might have posed. All of his confidants warned him about her, including future War Machine James Rhodes, but Tony chose to brush off their warnings, until at the end of Iron Man #242…

Tony’s arrogance came to a head, leading to a life-and-death struggle in issue 243 that would ultimately leave him paralyzed. It would soon be revealed that Dare had a history of not only stalker behavior, but exes meeting with unfortunate “accidents.” Had Tony bothered to think of her as anything other than an object of desire, he might have seen the signs, or at least taken them seriously.

Arrogance has, of course, played an increasing role in the makeup of Tony Stark’s personality since his gross mischaracterization in 2006’s Civil War, which saw him go into full-throttle dick mode and at least partially informed Robert Downey Junior’s portrayal of Iron Man onscreen. And it’s always been there, at least in part, due to the relative untouchability his wealth vested upon him. The alcoholism made him vulnerably vulnerable, finally, but he still had all that money to fall back on even when things got tough. But as Micheline and Layton would reveal, that wealth created a blind spot in him as he stumbled haplessly into a trap he couldn’t buy his way out of: his belief in his own invincibility.

Tony Stark wouldn’t walk again without some sort of assistance for more than fifty issues, long after Micheline and Layton had bowed out for a second time. But for their second era of peak greatness for Marvel’s Man of Iron, they etched a poignant picture of a man cursed with a lack of self-awareness that for a second time almost killed him – but this time, for very different reasons. Future writers would of course forget this maturation of Tony’s character, and his various hookups, flings, and one-night stands would persist in time. But for one too-brief moment, the man in the iron mask was vulnerable in ways fans had never known before.