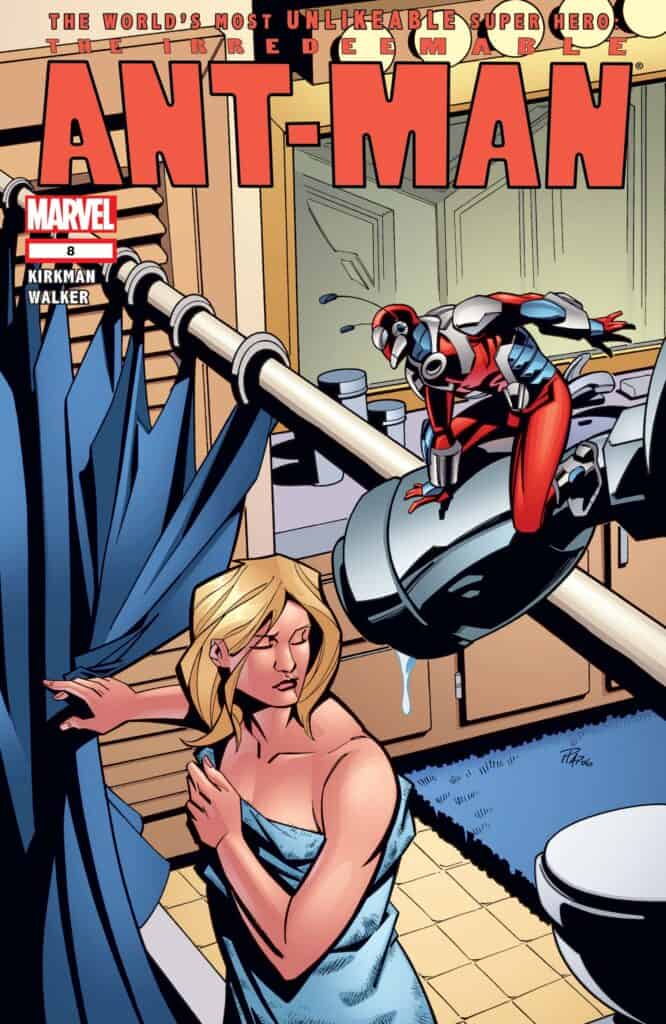 There’s a special place in my heart for scumbag characters.

While my favorite superheroes tend to be fully on the side of heroism with a knack for having boundless optimism, there’s just something about douchebags like Guy Gardner, Namor and Oliver Queen that make me want to cheer for them. However, The Irredeemable Ant-Man, Eric O’Grady, takes the cake for possibly being one of the worst “superheroes” that the world has ever seen. And that’s why I think his short lived series deserves the Throwback Thursday treatment. 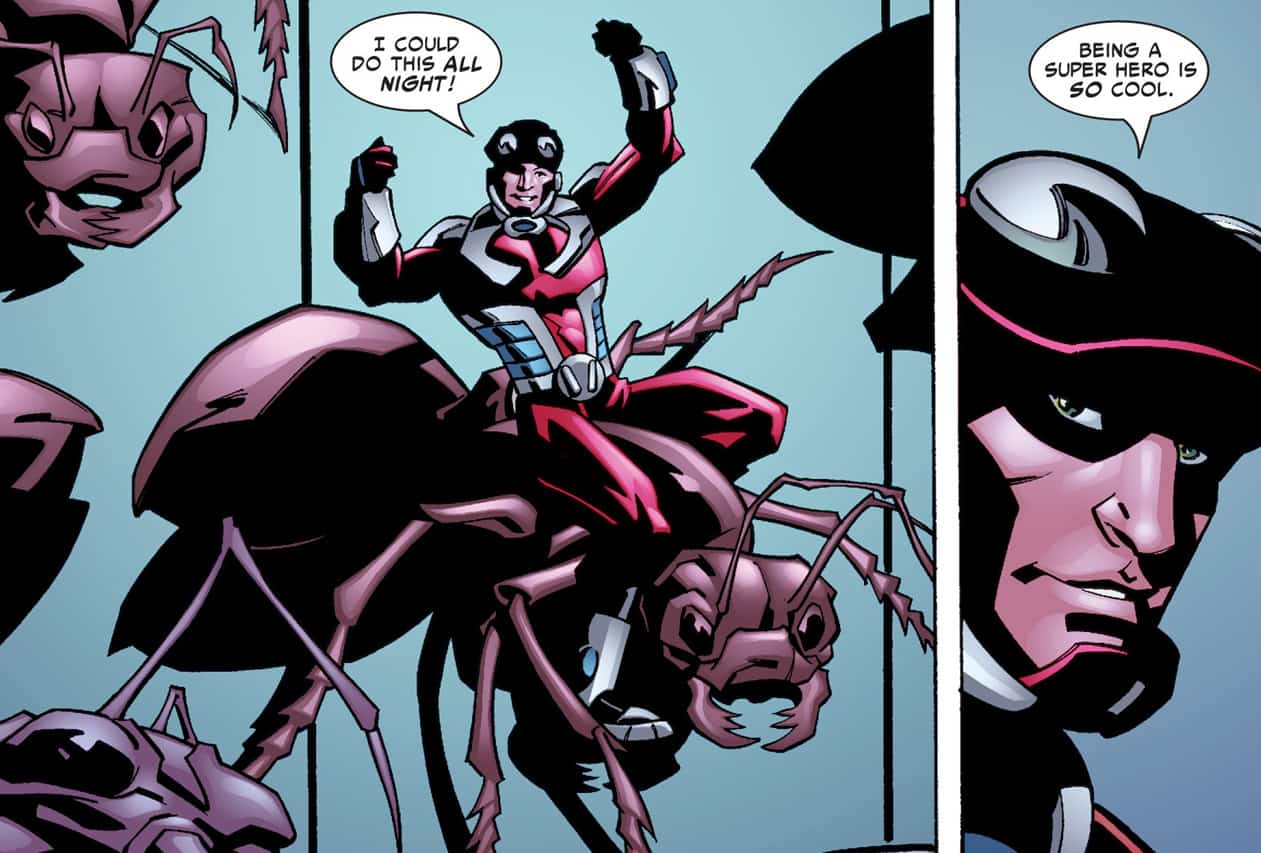 Created in 2006, Eric O’Grady was a SHIELD agent assigned to monitor duty with his best friend Chris McCarthy. When Eric and Chris are assigned to guard the entrance to Hank Pym’s lab by their friend Mitch Carson, Eric gets nervous and accidentally knocks the good doctor out and things quickly spiral from that moment. The events of “Wolverine: Enemy of the State” cause such a ruckus that Chris, having put the suit on just to feel like a superhero, shrinks down and gets lost aboard the Helicarrier for a week. In the meantime, Eric lies about Chris’ whereabouts to the woman he’s seeing, tries to make moves on her and ultimately gets confronted by his friend. When Elektra and the Hand launch their assault, Chris is killed, Eric steals the suit and then begins his “superhero” career as the new Ant-Man, unbeknownst to anyone else (for a little while anyway.)

O’Grady is then the worst for pretty much the rest of the series. He constantly lies to his co-workers about what happens to the Ant-Man suit, unknowingly gets his dead best friend’s girlfriend pregnant, spies on women in the shower and then proceeds to steal almost constantly – to the point where he becomes best friends with international jewel thief, The Black Fox. The first six issues of the series will leave you almost hating this man to the point where you wouldn’t mind if Carson caught him and gave him what was coming, but by the time the next volume has readers hooked, they start being able to see the small shreds of humanity that O’Grady might have hidden underneath. 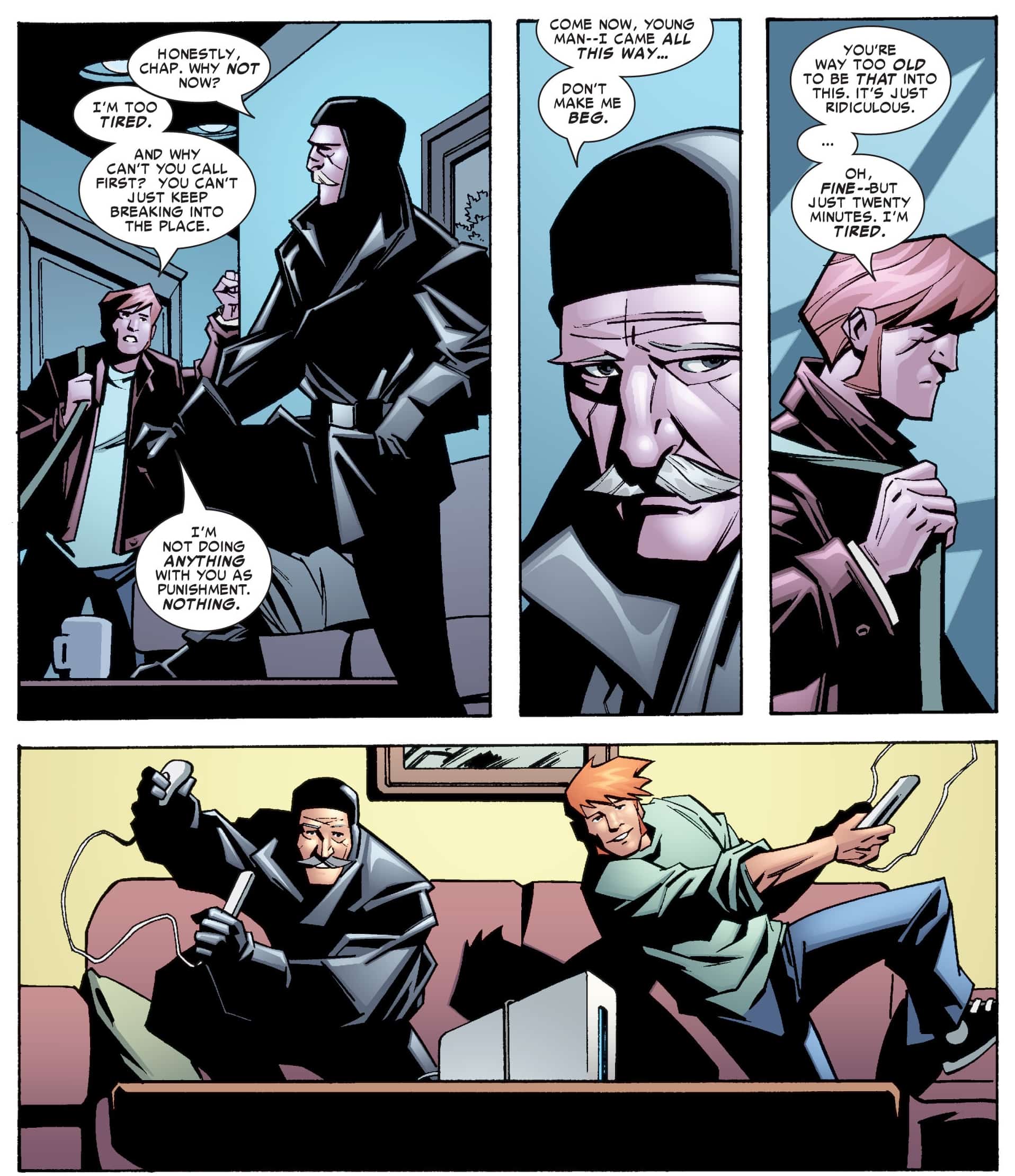 One of the things that Kirkman does well with the writing of Eric O’Grady is acknowledging the character’s sociopathic tendencies and not trying to justify his behavior by giving him a tragic backstory, but instead just making it who he is. It allows readers to hang on to the few moments where O’Grady genuinely has a slight bit of emotion and care for the people around him. He can lie better than anyone, but when he does let his guard down, he seems very real and personable – acknowledging how he even hates the person that he is, but he also can’t exactly change either.

One of the main reasons I love this series so much is because of the amazing art by Phil Hester, Ande Parks, Bill Crabtree and Val Staples. They put so much time and effort into each and every panel and page and it’s easy to tell that they were having fun with the concept.

Hester does a great job in giving everything the perfect scale for the shrinking hero’s adventures, like making him able to slide under door cracks or sitting cozy amongst the larger contents of Carol Danvers’ purse as he escapes from Mitch. One of the best examples of this in the book was a moment when O’Grady attempts to save a woman from her abusive husband at miniature size and punches a hole straight through the man’s throat by accident, causing a fountain of blood to shoot O’Grady towards the ground. Despite this act being absolutely horrific as Eric likely killed the man, it’s treated with a darkly comedic tone as he lacks the understanding that while he maintains his normal-sized strength, it is still condensed in his tiny surface area. 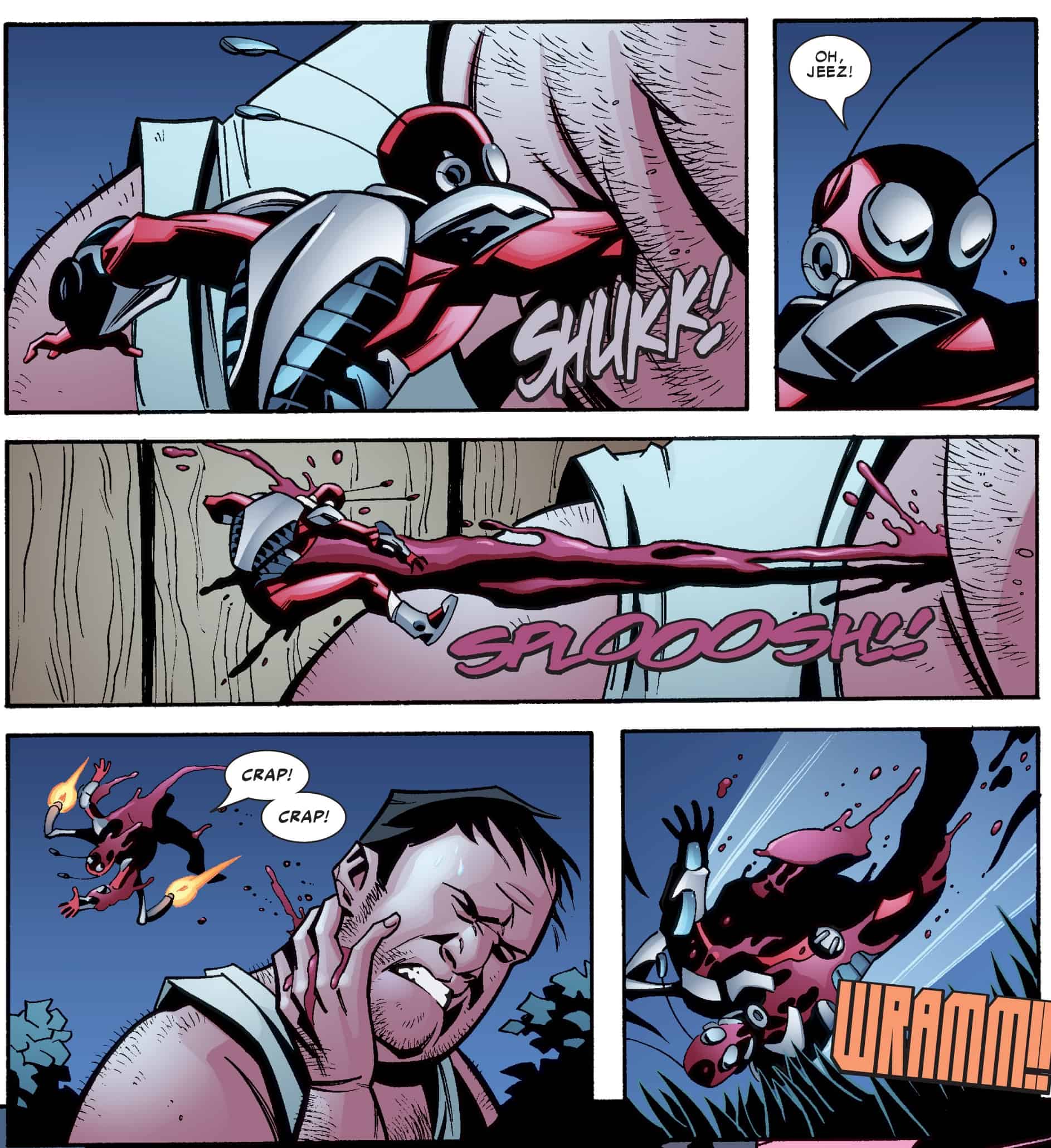 Whenever Ande Parks inks Hester’s work, the pieces always turn out gorgeously, giving each page and panel a sense of depth and immense detail. Parks’ inks are incredibly dark and make shadows pop very well against the stunning colors from Crabtree and Staples. They also give more definition to the line art by giving each character and object distinct outlines to further stand out from the variety of environments in the book.

Crabtree and Staples’ colors help to set the tone of the book and helps to make O’Grady himself stand out amongst the rest of the cast. Much like Scott Lang before him, Eric O’Grady is a red-head with a mostly unkempt style and it contrasts with most of the other characters in the book having black or graying hair. It’s eye-catching for the reader and allows for the main character to be distinct like other Ant-Men before him. A lot of the story tends to take place on the Helicarrier and backgrounds are given metal grey tones to them, but when the action is taken outside, the scenery is alive with the heat of yellow afternoon skies to dark blue dusks. Even the one issue where Eric tries to take on the Hulk has great coloring for the green guy’s insides, looking like a nice toxic green as fans might expect. 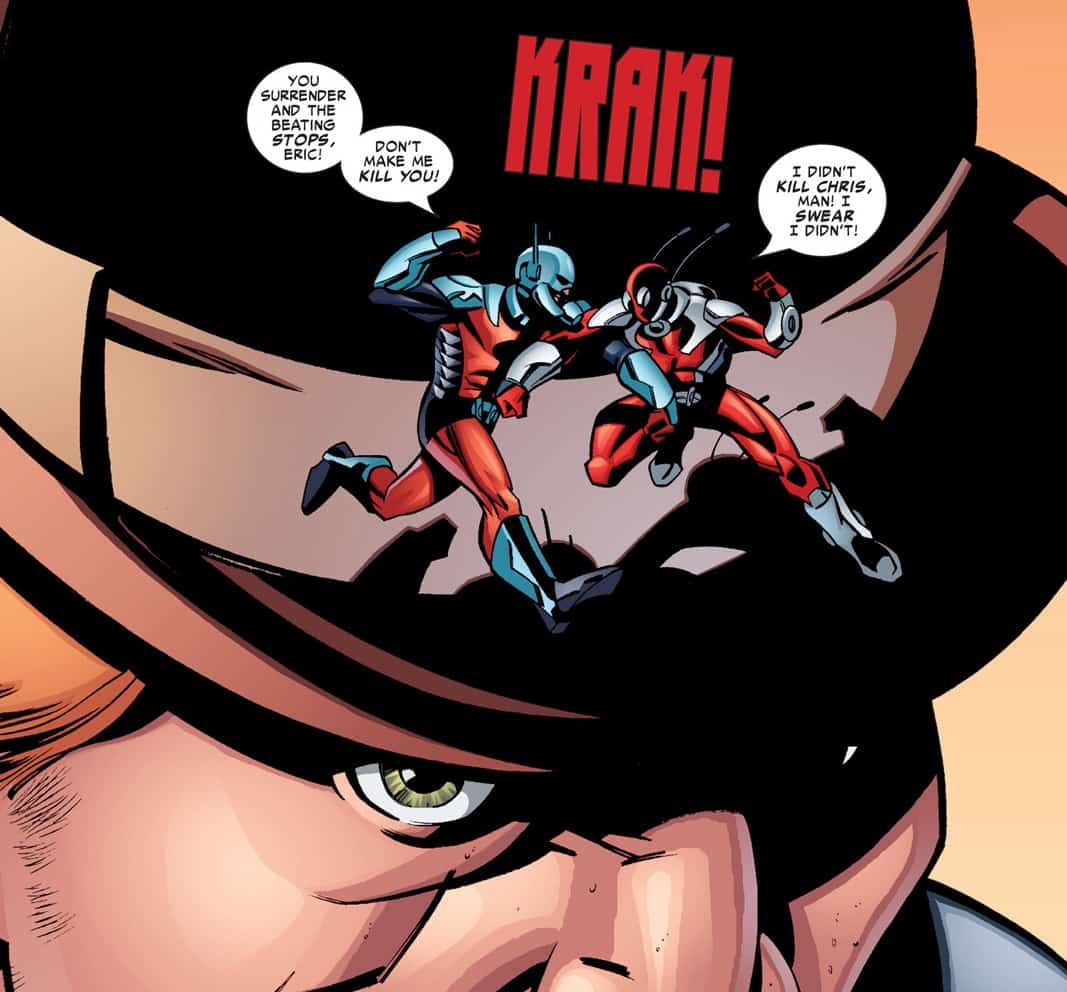 When Cory Walker of Invincible fame takes over art duties for issues 7 and 8 his art immediately stands out with how distinctly different it is from Hester’s and how much he plays up more of the comedy of the book through his multiple panels of the same face gag and introducing The Black Fox as another bit of comedy relief in the book. His colors are also a bit more vibrant as he chooses to go with lighter tones and airbrushing for backgrounds and character clothing.

Overall, I think this series is fun. Eric O’Grady does seem pretty irredeemable in the early issues of this book, but as it goes on, he starts to feel more and more humanized as his cracks begin to show. And while he doesn’t go through his full character arc in this book, other writers did continue to use him as the years went by. He would appear in Avengers: The Initiative where the first sparks of his future friendship with Taskmaster would show and another starring role in Rick Remender’s superb Secret Avengers. He would get killed in that book and come back as a Life Model Decoy which is what he’s remained to the present day where he’s now known as Black Ant. 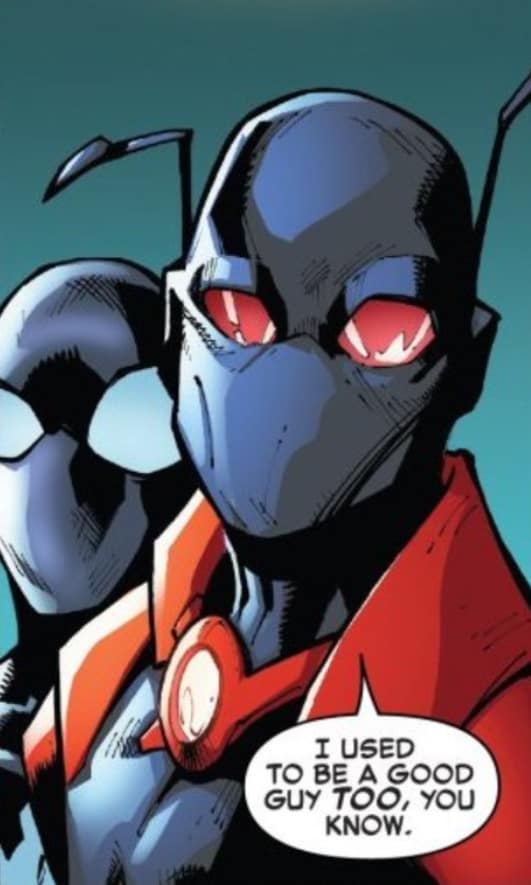 Because he completed his personal growth in Secret Avengers I think there’s room for a character like Eric O’Grady as the villain he’s become. He’s the black sheep of the Ant-Men and I would like to see that expanded upon, especially as the dark opposite to Scott Lang, but as far as I know they’ve only crossed paths once during Secret Empire. His bromance with Taskmaster is great and I’d also love to see them in a buddy comedy series annoying the Marvel Universe, but who knows, maybe he’s good just appearing as mercenary when Spider-Man needs an easy victory?