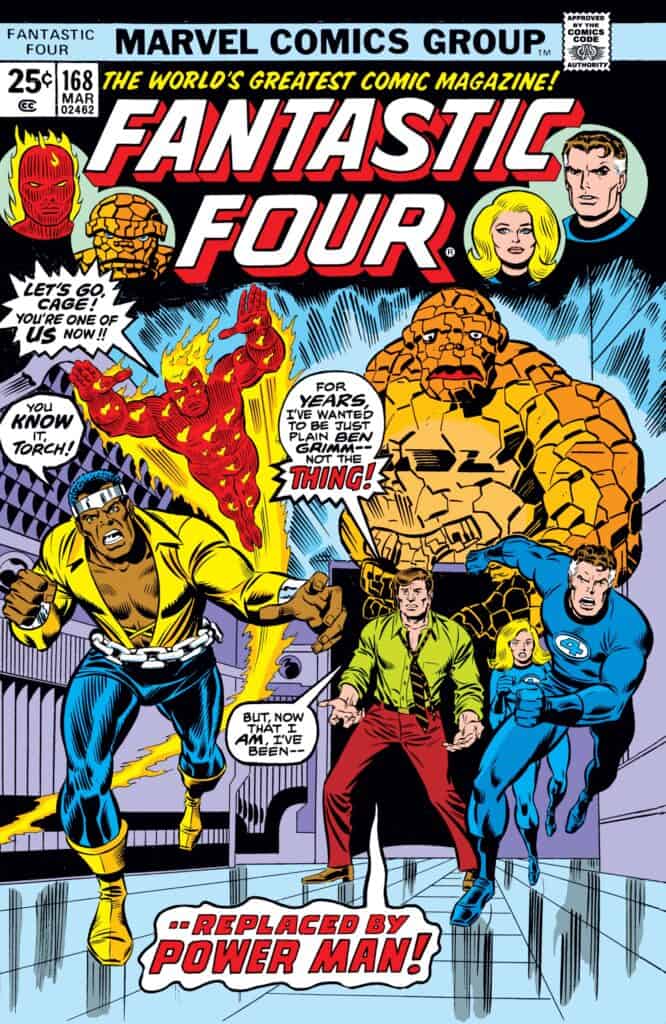 The mid-’70s were a strange time for the Fantastic Four, and really, most of Marvel at a whole. Sure, there were outliers of greatness like Jim Starlin’s seminal Warlock/Thanos mythos, Howard the Duck, the glorious weirdness of The Defenders, the grand and sweeping sorta-gothic horror of Tomb of Dracula, and starting in 1976, the return of some team called the X-Men – but by and large, the Marvel Universe was on cruise control. Part of that could be attributed to growing pains: after all, it had been over a decade since the company’s “world outside your window” ethos had been established, and even the deepest wells can run dry after so long. Part of it was that the company’s most important foundational members had scattered – Stan Lee was locked into the publisher role, Jack Kirby was at the Distinguished Competition making comics history with Fourth World, and Steve Ditko was running around at Charleston making increasingly-Randian comics like The Question. Important early artists like John Buscema and John Romita and Marie Severin remained, but none of them were calling the editorial shots. Sal Buscema, Gene Colan, Gil Kane, and George Tuska were all doing their due-diligence.

And then there was editorial, which was a rotating door: Marv Wolfman, Archie Goodwin, Len Wein, and Gerry Conway all sat in the head seat at the table in a span of three years, respectively. Conway lasted all of two weeks. The result was a Marvel whose output was comfortable treading water, sticking to formula, and crafting comics that were safe and relatively predictable, but generally enjoyable.

All of which brings me back to the Fantastic Four, Marvel’s flagship title, its cornerstone, its foundational rock. By 1976, the team was long past the glory days of Kirby and Lee. Roy Thomas was holding down the fort, and had been doing so for several years, predictably producing decently fun issues month-in and month-out that could be counted on to give fans what they wanted from Fantastic Four stories: science fiction, family drama, superheroics, and just a smidgen of pathos here and there, particularly where Ben Grimm, a.k.a. the Thing, was concerned. But, since superhero comics are and ever have been about the illusion of change, shaking things up – even where the FF were concerned – wasn’t out of the question. Which brings me to the Thing.

The Thing is one of comics’ greatest characters: he’s tough inside and out, can kick the crap out of just about any challenger, never quits, but inside is disgusted by the fact that he thinks he’s a monster. But, because of how Grimm’s personality is built, a writer can drop him into pretty much any kind of story and just let him go, and he’ll fit right in. There’s a pretty plausible reason why he was able to hold down 100 issues of Marvel Two-in-One plus thirty more of his own eponymous series after that: he’s just a fun, great character who works in any circumstance because he plays off of other so well. (And as an aside, in the more-innocent age before Wolverine’s ascendance, he was more or less Marvel’s resident bad boy.)

The trick to writing The Thing is that despite his strength and never-say-die attitude, deep down, he really just wants to look like a regular guy again. This had happened a couple of times already, in the seminal classic “This Man… This Monster!” in FF #51, and later for a relatively longer sting (read: a couple of issues) starting in issue 107. But by issues 168-170, it was time for something a little more (not really) permanent. Again, the illusion of change.

The issues prior, in a fight with the Hulk, ol’ Jade Jaws had unintentionally leached some of Ben’s radiation out of him, returning him to normal. You’d think this would make Ben happy, but, #168 opens with him struggling to adjust to life as a regular guy, and perhaps unsurprisingly, doing a piss-poor job of it. Despite his desire to be a normal person (eh, whatever that means), Ben feels raw because he can’t be a superhero anymore. This is compounded when he walks into the Baxter Building, and without any fanfare, Luke Cage has replaced him on the team!

As it turns out, there’s a clause in the FF’s business contracts that stipulates there must be four superpowered members on the team at all times. Thus, Mr. Fantastic hired Luke Cage to sub in for the Thing, now that he’s no longer super-powered. Needless to say, our Mr. Grimm is nonplussed at how quickly he was replaced.

There’s a concession here that ought to be made here for modern readers: 1970s Luke Cage was written exclusively by white men, and it shows. His dialogue is a trainwreck of bad clichés mixed with how white people “thought” Black people spoke. It isn’t intended as a negative, but it’s pretty cringeworthy at times. Anyway…

The Thing is pissed at being replaced, and surlier than ever. It probably doesn’t help that his so-called best friend Reed Richards is more or less telling him to look at the situation rationally, because there are legal considerations to be had, and doesn’t take Ben’s feelings into consideration (apparently).

But it doesn’t take long before Cage begins exhibiting signs of being mind-controlled, and before you can say, “Hey that was convenient!”, events are set in motion to get Ben back into the FF fold, lack of superpowers be damned. Reed Richards, naturally, has a solution – which is a topic for another column, but suffice to say is a pretty nonsensical attempt at trying to have one’s cake and eat it too as far as the Thing is concerned. With relative ease and haste, the true villain is revealed, much pathos is had, and in the end, everyone goes away happy (well, except for the actual mastermind of Cage’s mind control, but that guy’s always pissed off).

The real draw of this three-parter is the fun of having Luke Cage interact with the Fantastic Four. Though both parts of the same Marvel Universe, they couldn’t be further apart: the FF corner the sci-fi exploration market, and Cage punches pimps on a corner. Throwing them together, even on a superficial level, is great fun, despite the innocuous and temporary nature of their commingling.

Plus, the FF have a grand history of other people subbing in when the core members aren’t available, and Luke Cage’s three issue stint is a part of that tradition. Other roster shake-ups include the She-Hulk swapped for the Thing, a lady Thing swapped for the regular Thing, Storm and Black Panther swapped for Reed and Sue, and Hulk, Spider-Man, Wolverine, and Ghost Rider swapped for the whole damn team. It’s terrific stuff. Messing with the FF’s equation is a time-honored Marvel tradition.

And as a bonus – issue 170 features a young George Perez on art. Bronze Age journeyman Rich Buckler drew issues 168 and 169, but once Perez steps in, the difference is palpable even if he wasn’t anywhere near the peak of his powers yet. He draws a GREAT Thing, and even as a young artist could stage the hell out of a fight scene. Perez had first come aboard the FF with issue 164, drew the subsequent three issues, then became more or less the de facto series artist (with a handful of fill-in issues in the mix) until #192, at which time he graduated to Avengers. Despite the fact that he was still coming into his own as an artist at that point, he was very clearly a talent to watch.

The Fantastic Four would, of course, continue to perpetuate, although they would stymie future writers such as Marv Wolfman and Doug Moench before returning to the highest creative point of their publishing history outside of Kirby/Lee when John Byrne took over in 1981. Luke Cage would struggle to find his way until some genius editor thought up the brilliant idea to pair him with Marvel’s other prominent fad-based hero, Iron Fist, in 1978, resulting in comics’ greatest team-up comic of all time (fight me, Brave and the Bold and World’s Finest).

But for one brief moment, their worlds collided, and fans were richer for it.