Who Is the Author of a Comic?

What do we call the people who make comics? Is to make a comic different than to author one? Film reconciled the issue of obvious divers hands, few of them in specifically assistant roles, via the concept of the auteur, a status that can be achieved by an individual director or producer or a set, repeatedly demonstrated collaboration. In Japan, the primary voice of a comic is the mangaka.

Patricia Highsmash
Who Is the Author of a Comic?
by Travis Hedge Coke

Mangaka applies to a primary, or name visual contributor to the final comic, while in English-language comics, we so often speak of the owner of the property, the person or company who files the copyrights and trademarks. Or, the name, regardless of contribution. Is a publishing company the author or auteur? Are work for hire writers, artists, letterers, talent or creators? Does talent have to generate new characters to be a creator?

I do not play a fair game with this. I dance over the entire board, saying, “talent,” and “author,” and when, author, some will assume I mean writer, the scripter, plotter, or dialogue writer, and so I jump back to, talent, or I say, “comics makers.” That is a mess, and I am not alone in this mess. The mess really is how we talk about comics.

Increasingly, in digital sales and in solicits, the writer is credited alone, or far above any other person. 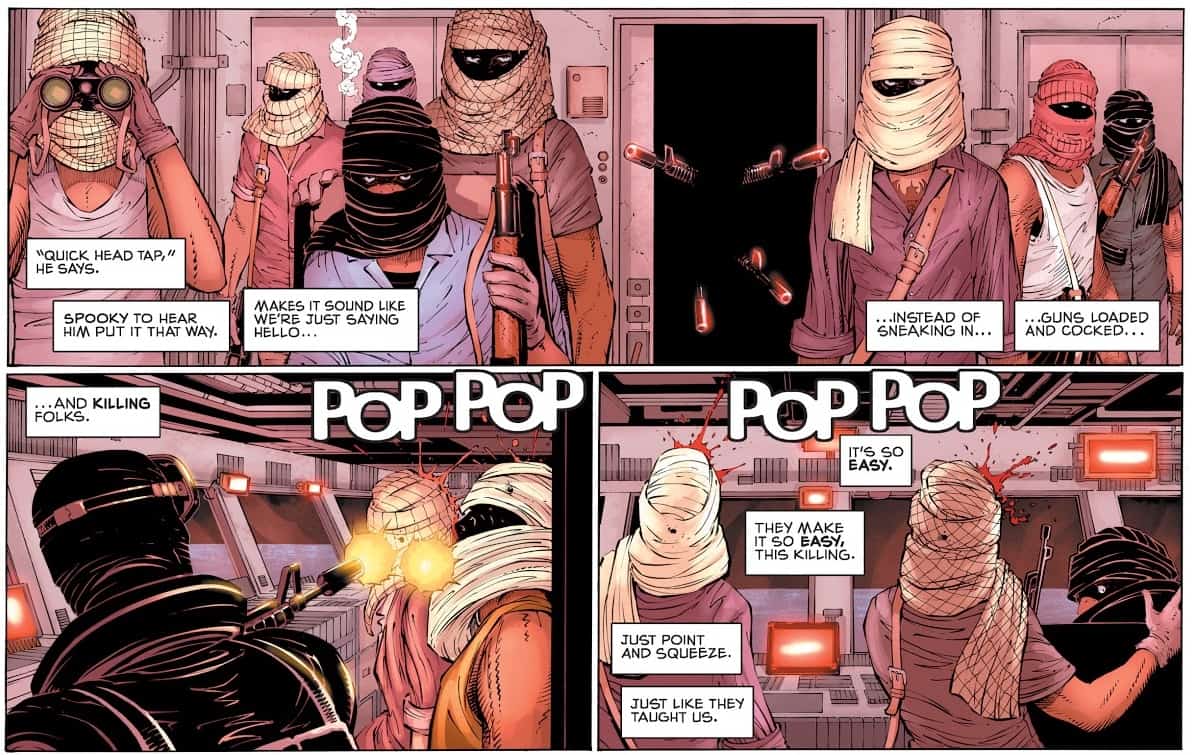 Who bears the responsibility for this? The artist? The writer? The publisher?

While criticism of visualizations pile up for the currently-serializing, Superman Year One, almost every instance applies the blame to Frank Miller, by name, and no one else. Frank Miller is not drawing Superman Year One, except for alternate covers. John Romita Jr is the primary artist on the comic, the penciler and, as far as we can tell, the designer. If we take issue with the head wraps on pirates or the way women are visually portrayed, how much of that visualization can be blamed solely on the writer, how much credit should the penciler get, how much responsibility should they bear? Who is the author of the visuals of a comic? The responsible party?

Are not Marvel and DC the legal author of most of the comics they publish?

When I credit letterers or colorists on a level with pencilers (admittedly, I do not do this enough, where it matters), even deep comics lovers are often annoyed. A colorist can make a comic for me. There are comics where a letterer brings in half a dozen typefaces, all clearly delineated, shaping the entire tone of a comic, and there are high profile comics where the lettering is so pro forma that when they use blue line and fx to indicate a notebook page, they still cannot place the words, themselves, in between the notebook lines, but run them as they would any text, destroying the illusion.

Do we need to know who Rumiko Takahashi has doing paste up in one chapter of Urusei Yatsura? Does it change anything who is doing the screentone or shading? Can anyone not making it a serious study, tell?

The difficult with concretizing auteur, as the film author, is the same as the same as will keep us from having a single term, a universal English term for comics-making-people. People in comics. I’m in the band. I’m with the band. Is the screentone assistant the dancer at the side of the stage while the band plays and is that a member of the band?

Is an editor in the band or with the band? Is a letterer? When we say, “a comic by ____,” what did they do? Generate the original idea? Draw? Write? Write and draw? Do everything short of binding the pages? We know who did the special illustrations for the “illustrated version,” of Jurassic Park, but what about the illustrations that are in every commercial version of the novel, which are integral to the telling and atmosphere, and, it bears repeating, in every commercial version of the novel? We have no clue.

As the creator of the characters, place, and plots, the visual artist and the writer of Sin City, Frank Miller is the deciding presence and auteur of those comics. But, what of the wonderfully evocative lettering, so brilliantly places, unobtrusive and inviting on nearly every page, from That Yellow Bastard to Rats? The words on the pages make their own art, enliven, envenom, and enlighten each of the Sin City yarns. Those, too, are Frank Miller. He letters Sin City. That is so rare, though, that without looking it up, how many of you remembered that?

How many of us have enjoyed Gothic, the Batman comic drawn by Klaus Janson and written by Grant Morrison, colored by Steve Buccellato, without ever wondering about the clip art and collage work in the comic, and where the collaged elements, where the paste up begins and the pencil work by Janson ends? Do the artists of the pasted in elements or the traced deserve an in-book credit?

Many pencilers, in comics, and inkers and embellishers and letterers write comics they work on with a credited writer, even if they do not type. Typing ain’t writing. If a penciler takes a scene where the President of the United States is shot in the head, and draws in some kind of alien mess emerging from the wound, that has altered the plot, the tone, even the genre. That is writing. Does not matter a lick if they physically transcribed the idea somewhere before committing the artwork. When a colorist chooses a red wedding dress over a white or a blue, they have altered the fabric of the scene and the characterization of the people in that scene considerably. That is writing. 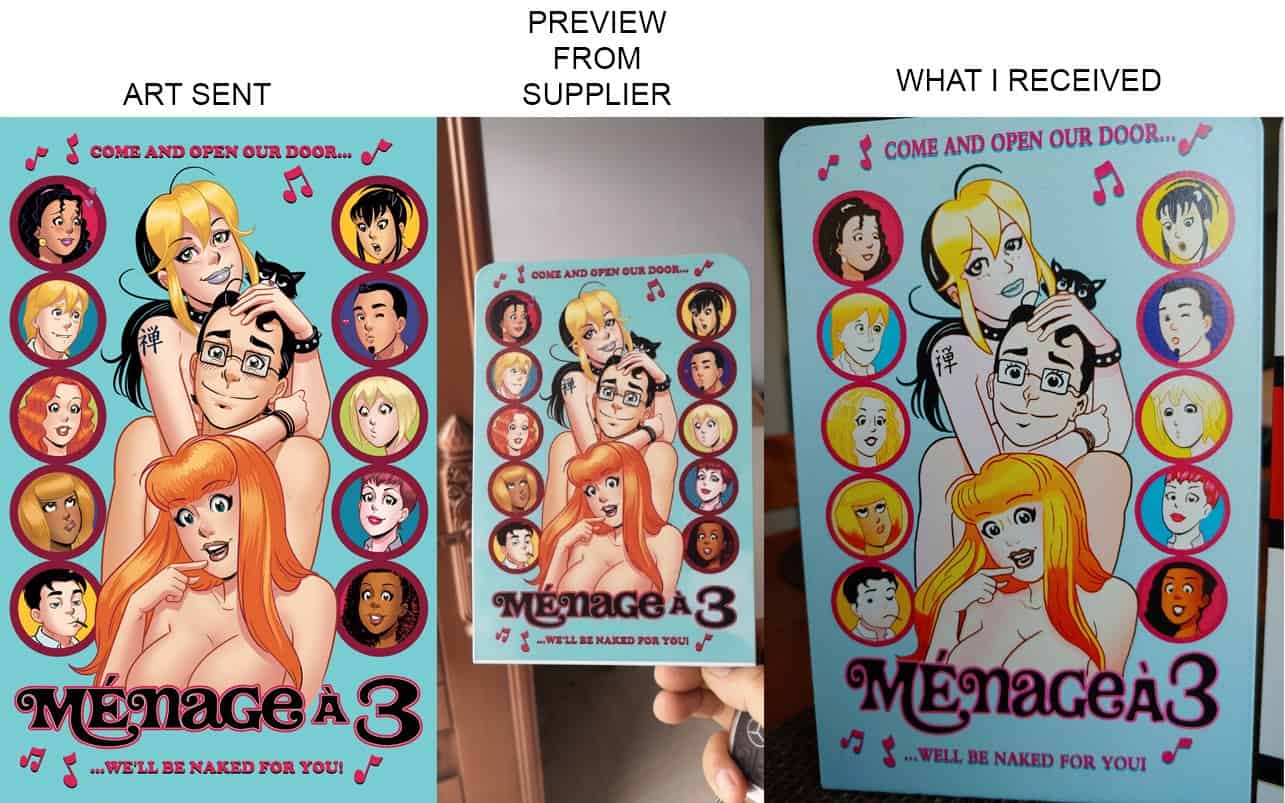 Gisèle Lagacé has recently made note of a printer not only recoloring a cover, but redrawing it, “almost in a mocking fashion.” All for want of a vector file that she was not apprised of, this misstep of a cover will not reach public buyers, but even conceptually, altering a kiss to someone sticking a tongue out changes how we are introduced to characters, how we will respond to them from thereon out. Even a cover that does not run can become the specter of the control to clutch control away from any by name author.

I take a kind of special delight in early 1960s scenes where Stan Lee, in particular, is dialoguing and writing captions over someone else’s plotted panels, and he misses the obvious and plugs in text that does not quite match up but overrides the visual. He mistakes someone leaping away from a hurled object as them kicking the object. That override is powerful. “He who gets the last word.” Stan Lee dismissed Wally Wood in a credit box, once, and while I still bristle reading it, and you should too (and I am sure Wood did), it is important to acknowledge the power exerted there, too. The final word.

Regardless of the minutia of Lee’s contributions to collaborations with artists in the 1960s, his claim to authorship of comics is at its strongest because of his force of character and his forcing his character. Stan Lee was an act, and that act could confidently claim, as he once did, that he created Superman.

The person who gets the final words in the boxes is not always of Lee’s stature. They do not have to be the editor, or the editor in chief, the writer or letterer. Sometimes, it comes down to an assistant editor who feels they need to rewrite some words, swap adjectives, to justify their position. Once in awhile, autocorrect or simple distraction alters an innocuous word into something offensive, as when an X-Men comic unfortunately ran with an antisemitic slur in place of the simple descriptor, “killer.”

If an assistant editor’s nerves or a simple paste up can cause such alteration to a comic, if a company can override an artist, even a star artist, and have faces redrawn or pages removed, if a colorist can alter ethnicity and play skin politics beyond the script’s intentions, is anyone truly worthy, even generally worthy of being called an auteur, or the author?

Mangaka seems a fair attribution, from afar, but mangaka carries its own politics, the way a sculptor may not ever touch a statue they have made, yet remains the sculptor. Some mangaka generate the basic idea, maybe even plot story arcs or scenes, but only draw the eyes of the main characters. They may not rated the initial idea, but have brought it to full life with what is mostly their own art, by their own hands, and their own ideas and words. While a writer who never draws a thing, is not traditionally called a mangaka (they are, gensakusha) if your visual contribution is drawing in one body part in primary figures or having done the visual designs for others to use, how much difference is that? Enough difference, obviously, so maybe the question is what, truly, is that difference?

I am specifically drawing attention to exaggerated cases and outliers, in part because there are so so so many outliers and cartoonishly complicated cases. It is a rarity to see commercial comics drawn, written, and lettered by one person, even if their wife did quite a lot of coloring but they’re split up now so she won’t be credited too loudly. No commercial media is really often conceived, designed, and manufactured by one person. The cover to a novel changes how we receive the novel. A painter’s assistant may be a dominating and respected painter in their own right. Film, then television, drew out the group effort of art because there are both elaborate credits appended and so many featured players are visibly before us. Comics have the credits, if not the visibility, but even then, comics credits are almost always lacking.

A television show may hire someone to place the correct medical jargon into the script shortly before the actors speak their lines, but that person will be likely credited somewhere in the long roll of names at the end of an episode. The artist hired to draw helicopters and only helicopters, or to keep architecture period, to paint in the reds on a painted comic that uses a whole ton of red, are more than likely not credited in the comic or anywhere via the publisher.

Join me in singing union songs while we consider why this might be.

Who is the author and who is the assistant? What is necessary to keep a comic that specific comic, and what can be replaced by a proxy? Who?

Who Is the Author of a Comic?