Women in the MCU: Taking Out the Trash, a Tale of Two Scenes with The Bechdel Test

The Bechdel test is not a perfect metric for whether a film portrays women well, but it is a great starting point. The premise of the Bechdel test is simple: a movie must 1) contain two named female characters who 2) talk to each other 3) about something other than a man.

The Bechdel test is a great tool for Baby’s First Feminist Film Analysis. It gives the watcher something concrete to look for, something to notice when it is missing (i.e., two women interacting). And today, we will examine two MCU scenes that sort of pass the Bechdel test, bring to light internalized misogyny, and feature women calling each other “trash.” 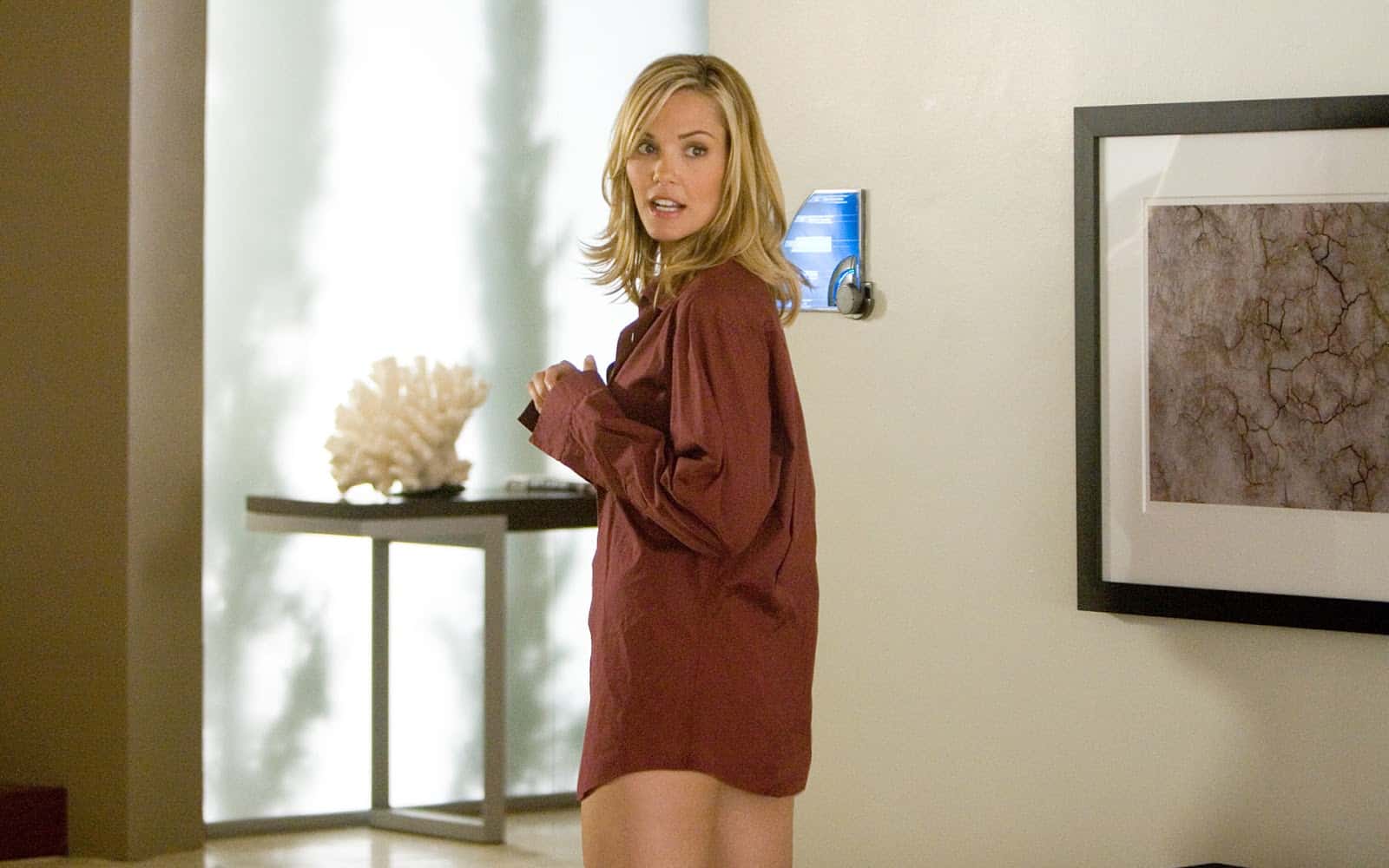 The first MCU scene that arguably passes the Bechdel test is found in 2008’s Iron Man. After a one-night stand with Tony Stark, reporter Christine Everhart wanders his Malibu home, only to be found and dismissed by Pepper Potts. Their exchange is as follows:

Pepper: That’s J.A.R.V.I.S. He runs the house. I’ve got your clothes here, they’ve been dry cleaned and pressed, and there is a car waiting for you outside that will take you anywhere you’d like to go.

Christine: You must be the famous Pepper Potts.

Pepper: Indeed I am.

Christine: After all these years, Tony still has you picking up his dry cleaning.

Pepper: I do anything and everything that Mr. Stark requires, including occasionally taking out the trash. Will that be all?

Whether or not this scene even passes the test is debatable. Pepper’s first line is about the sort-of-male character of J.A.R.V.I.S., and she and Christine both talk about Tony Stark. However, I think enough of the dialogue is about other subjects (the amenities awaiting Christine and Pepper’s identity) that I am inclined to give the movie a pass. 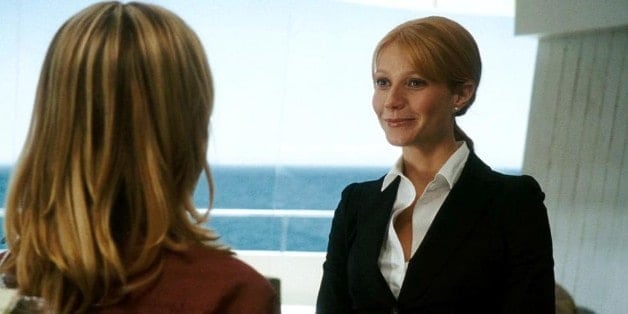 The audience is meant to feel triumphant when Pepper delivers her zinger about “taking out the trash.” We know that Christine is part of Tony’s “before” life, the 36 hours before his attack in Afghanistan. These 36 hours are meant to be a microcosm for his whole life prior to becoming Iron Man, giving us a “before” to contrast with his heroic “after.” Christine is lumped in with Tony’s excessive drinking, pole dancing flight attendants, gambling, and selfishness.

So when Pepper calls Christine “trash,” the audience is supposed to cheer her on. We are presented with the two women as opposites: the scantily-clad Christine snooping through Tony’s house after a one-night stand, and the modest Pepper Potts, who has been loyal to Tony for “all these years.”

The takeaway from this scene is “Pepper good, Christine bad,” and the movie never goes out of the way to challenge this. 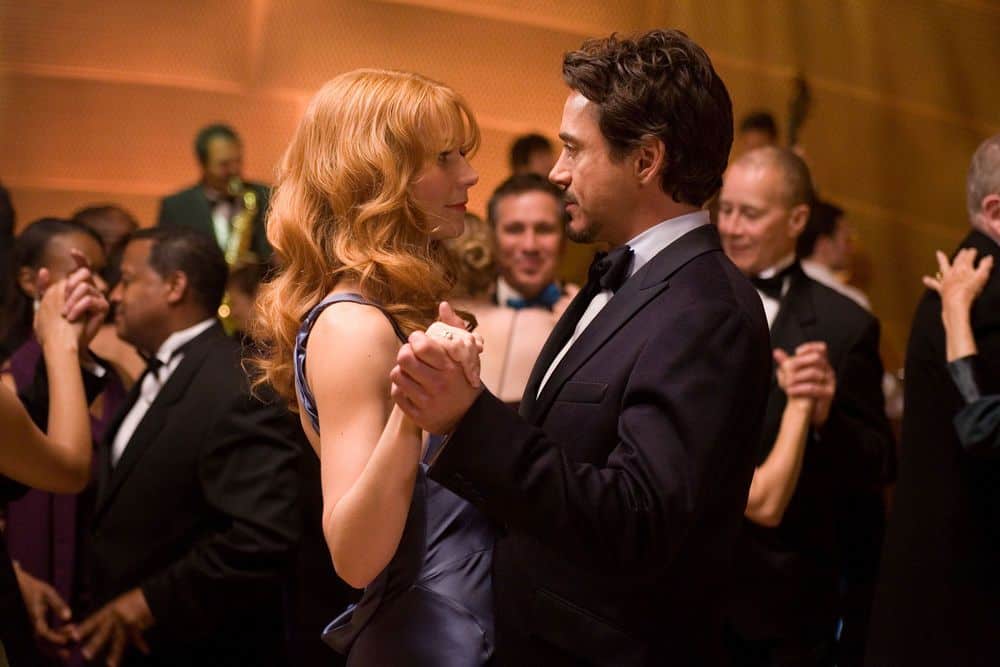 Neither Tony nor Pepper apologizes to Christine for how they treat her, and Pepper never insults Tony for his promiscuity. There are a few light jabs, but nothing to the extent of calling Tony trash. Tony is allowed to have his fun with Christine for a night, then leave her alone in the morning to be sent away and forgotten, like so much garbage.

Christine serves as a symbol of Tony’s “before” life. She’s his one-night stand after a night of drinking and gambling, and she seems to know more about the darker side of Stark Industries than Tony does. Christine shines a light on the secrets of the military industrial complex that generates so much of Tony’s wealth—and for the audience, she shines a light on Tony’s vices, vanity, and ignorance. Her purpose in Tony’s story is uncomfortable, but necessary. 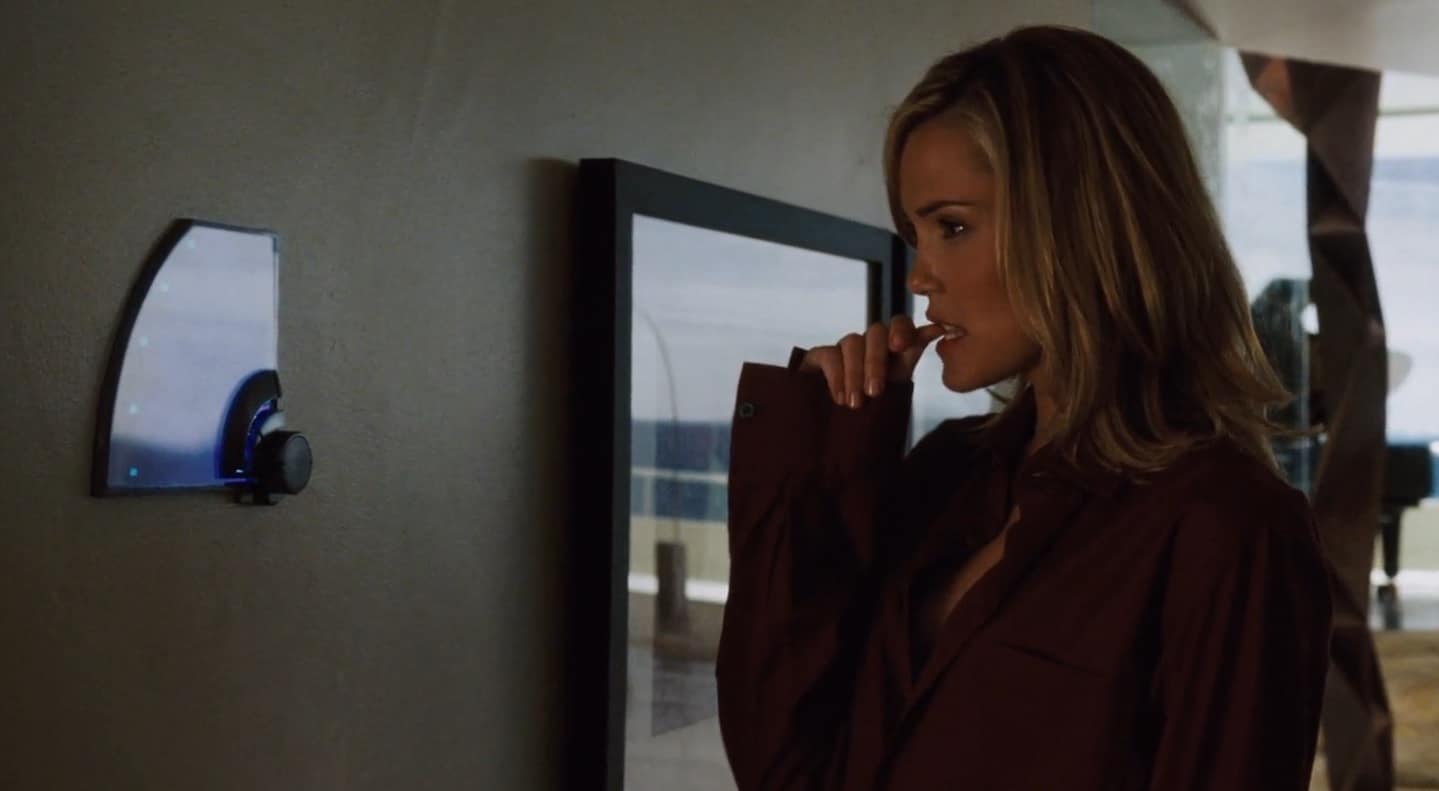 The problem arises from the fact that this scene is the only example of female-female interaction.

Pepper Potts doesn’t have to be a paragon of virtue, and Christine Everhart doesn’t have to be a dynamic, fully realized character. This movie is still Tony Stark’s story. But when the only instance of two named women speaking to each other in the entire movie features them antagonizing each other over sexuality—well, that’s a bad look. And when the movie never goes out of its way to suggest that Pepper might be wrong—that’s an even worse look.

Compare the scene in Iron Man to one from Thor: Ragnarok, in which Topaz and Valkyrie don’t actually speak to each other.

Grandmaster: He’s wonderful. It is a he?

Valkyrie: It is a he.

Grandmaster: I love when you come to visit, 142. You bring me just the best stuff. Whenever we get to talking, Topaz, about Scrapper 142, what do I always say she? She is the, and it starts with a B—

Grandmaster: No, not trash. Were you waiting to just call her that? It doesn’t start with a B.

It’s difficult to tell from the camera angle, but it is possible that “booze head” is spoken directly to Valkyrie. However, it doesn’t seem likely, given that Topaz goes out of her way to not speak to Valkyrie. 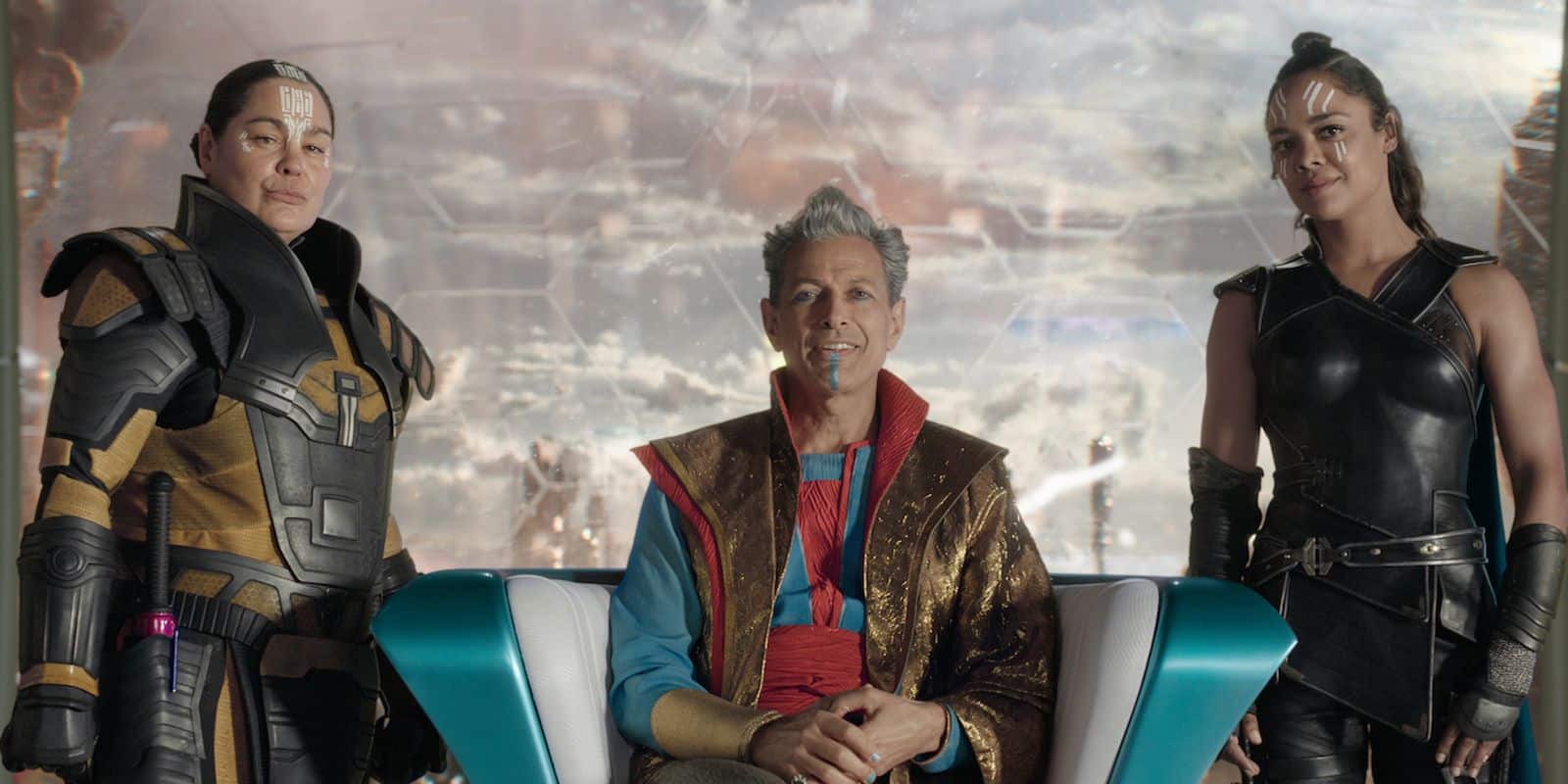 Whether Topaz’s disdain for Valkyrie is rooted in misogyny is unclear, but sexism is likely a factor. Topaz is not presented as conventionally beautiful like Valkyrie, and the fact that Topaz’s jealousy is focused on this one woman, and not every person pursuing the Grandmaster’s good favor (e.g., Loki), is suspect. Topaz views Valkyrie as competition, professionally or romantically, and that alone makes Valkyrie “trash.” 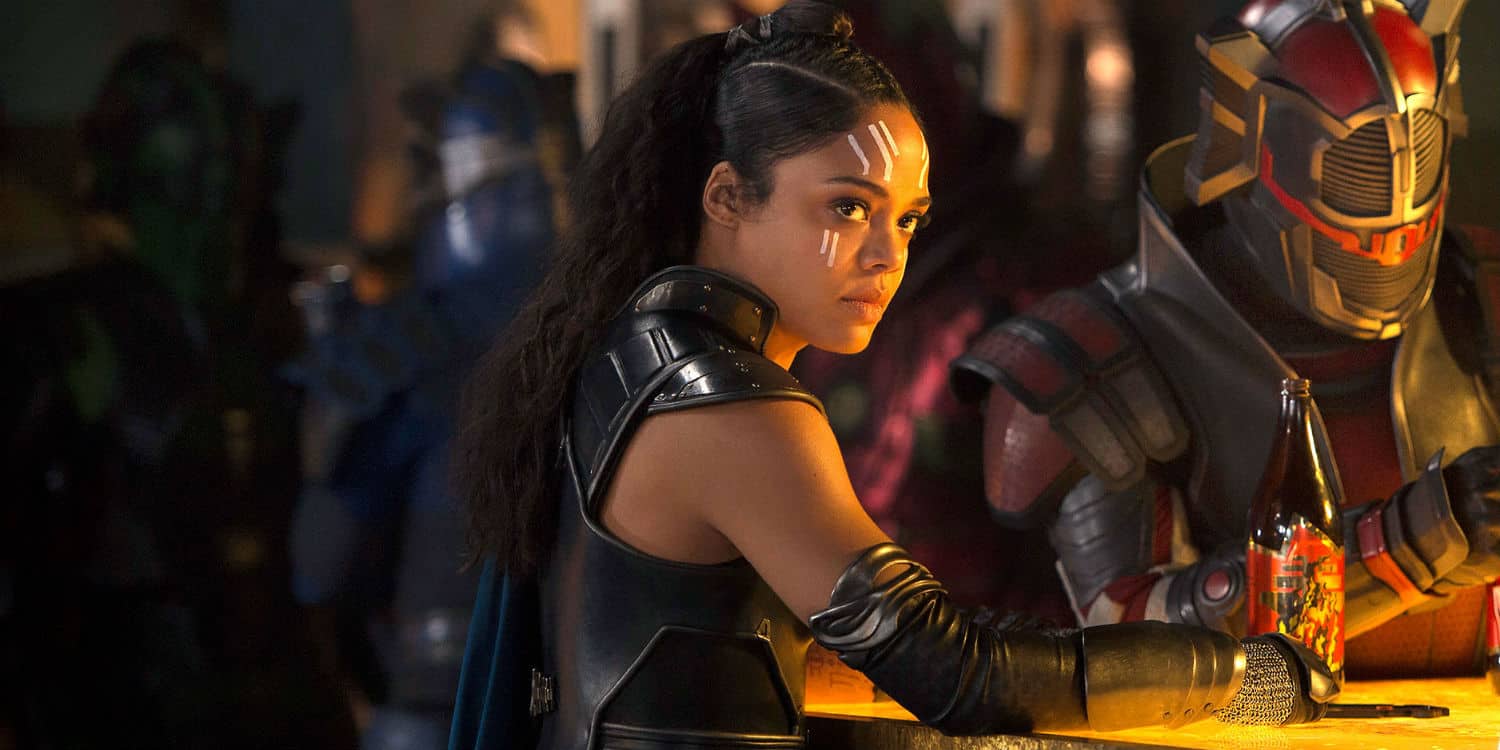 So the Ragnarok scene fails the Bechdel test by not having the two women speak to each other. But the way it frames the women’s competition is arguably more feminist than the scene from Iron Man.

What makes the Ragnarok scene so different from the one in Iron Man is that when Topaz calls another woman trash, it’s a joke, not a triumphant mic drop.

And yet, the scene has another unfortunate similarity to Iron Man in that the main takeaway is “Valkyrie good, Topaz bad.” There is no room for nuance in this relationship, just as there was no nuance in Iron Man for Christine and Pepper.

Not every character in a movie can be a fully realized, dynamic person. Some characters need to be static, to serve the plot and the main characters’ stories. Ideally, though, the MCU would have enough fully developed female characters that it would only be natural for them to interact with each other in every movie. But when your movies struggle to pass the Bechdel test, and the ones that do feature the women insulting each other, it’s discouraging for viewers who want to see themselves reflected on screen.

It is unfortunate that Thor: Ragnarok never features two women speaking to each other—about anything, even a man. Hela (the MCU’s first main female villain) is a rather forgettable villain, and it’s a shame that she never speaks to Valkyrie, especially given their history. But the scene between Valkyrie and Topaz does show some growth that Marvel has made; pitting women against each other, especially over the opinion of a man, is something to be laughed at, not encouraged.

Women in the MCU: Taking Out the Trash, a Tale of Two Scenes with The Bechdel Test

GUEST COMMENTARY: The Experience of an Immigrant’s Child in ‘I Am Not Starfire’, by Priya Saxena
July 27, 2021

The Conjuring Franchise for Dummies
July 11, 2021