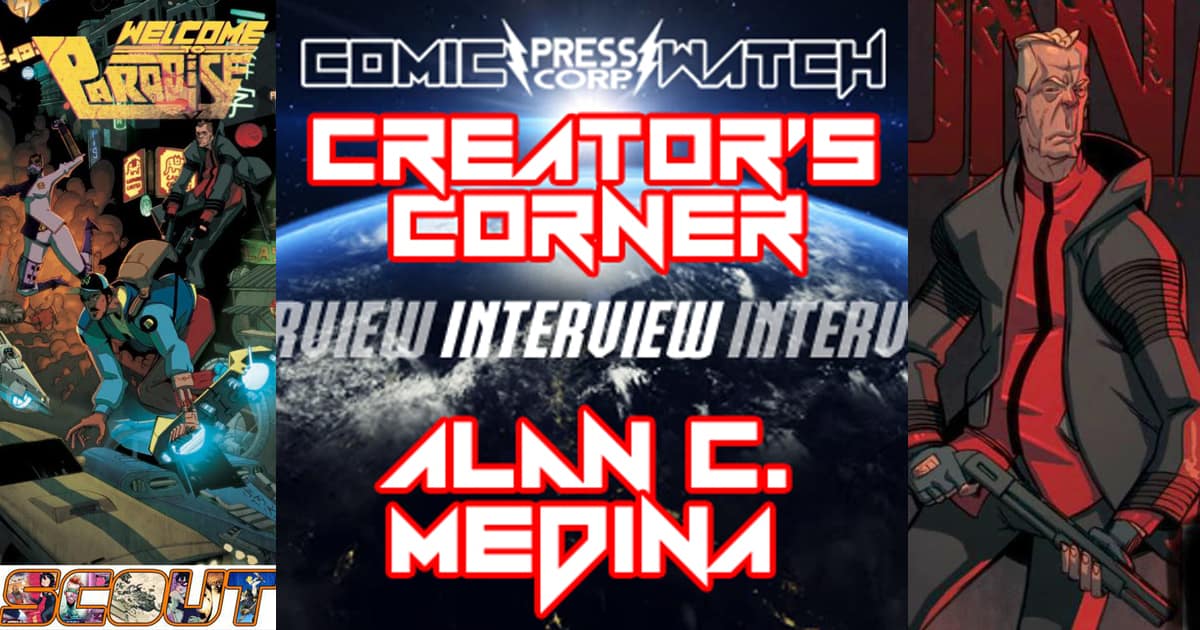 Indie Publisher, Scout Comics & Entertainment, are sticking to their roots, continuing to develop, publish and launch creator-owned comics, breaking ground consistently, by bringing fresh, talented voices, who deliver on the goods with each new title they release! One of these fresh new voices, writer Alan C. Medina’s goes in-depth discussing a shared passion for all comics, writing, plus his new title, Welcome to Paradise!

Scout Comics’ Welcome to Paradise is a different take on the post-apocalyptic tale, writer Alan C. Medina weaves a character-driven story that has a very ‘Tarantino -esque’ feel. If Pulp Fiction met Total Recall, Paradise could very well be the love child.  Welcome to Paradise gives its readers a dose of what one could expect, the bunker of Paradise has it all, gangsters, hit-men, assassins, deadly drag races, with more than its share of interesting plot twists.

Welcome to a world filled with deadly drag races for sport, routine mass killings called “the cleanings”, and where the common house is the size of a closet.

The story follows Manny, a fun loving, chop shop delivery boy, on the run and in possession of what may be humanity’s last hope.

The only problem is Manny’s world is a bunker the size of California and just about everyone in it wants him dead.

CW:  How long have you been writing in the comic industry?


CW: So, when did you first realize that you wanted to write comics?

A.C. Medina: I’ve wanted to make them since I was a kid, it first started with wanting to draw them but I still can’t draw a full circle now if that tells you anything. As a teen I started writing stories based on characters I played on online video games and I would post on forums online, the reception was really cool and from there it turned into what I wanted to do for the rest of my life.

CW: Did you read and/or collect comics as a child?

A.C. Medina: Yes, I started young with books sold at book fairs in elementary school. On weekends there was a mall my mom would frequent, there I would wander into a comic shop within the mall. This place became my happy place as a kid; most kids I knew didn’t read comics so I would annoy my way into comic shop talk on the weekends. Thankfully the retailers were cool and would eventually recommend what became some of my favorite books.

CW: What were your favorite characters and titles as a child?

A.C. Medina: As a child, I was big into Captain Underpants, I would buy those and try to use them for book reports, my teachers didn’t like that part. As I got older and what really became the catalyst of me being obsessed with comics as a medium was Vertigo. Those were the first books I read that made me feel “cool” and really let me know what comics were about, books like Scalped and Y: The Last Man became integral. That’s not to say I didn’t love superhero books, far from actually, especially Invincible which is another of my core books and Geoff Johns’ different DC revivals as well.

CW: Currently how many different titles are you writing? And out of those, which is your favorite?

A.C. Medina: I’m currently writing four series, as for my favorite well whatever title I’m working on at the time is my favorite. My favorite tends to change 3-4 times a day, though I’d say my true favorites are the ones that are in my head and haven’t become work. I love what I do but work is still work.

CW: Do you have a favorite illustrator/creative team that you like to work with?

A.C. Medina: Like the previous question I don’t really have a set favorite though if I’m not writing by myself I can often be found with my writing partner Mina Elwell. We’re always developing stuff but we have two series coming out one later this year that I’m really excited for.

A.C. Medina: Again, I don’t really have a favorite character; I love them all and hope to torture them equally. It’s too hard to choose but characters for me are the core of anything I work on, plus they’re so much to create!

CW: What was the first comic you ever wrote?

A.C. Medina: The first character I wrote that was published was Elasticator. It was special because he was one of my original creations from back in the forums, so it was really cool to bring a piece that to my actual career as a writer.

CW: Who or what was your biggest inspiration for writing?

A.C. Medina: I try to write the stories I’d enjoy as a reader and I go from there,  I want to always remain a fan of comics as I write them. Honestly, though, the real genius is my French Bulldog Rocco, he’s the real mastermind here.

CW: How did you first break into the comic industry?

A.C. Medina: I like to think I’m still breaking in? Like my legs are still hanging out of the window but I’m sure I’ll get in there sooner or later.

CW: Congrats on your success on Welcome to Paradise! Do you do a lot of publishing through indie publishers? And are you working with any other indie publishers that you can tell us about?

A.C. Medina: Thank you! I’m currently working with Scout Comics, I am on an anthology with Lion Forge which proceeds all go to hurricane relief, really honored to be on that. It’s available in March and can be pre-ordered right now on Amazon. I’m also alongside my writing partner, Mina Elwell, working with Starburns Industries new comic book line, really excited for that and look out this Free Comic Book Day.

CW: Out of curiosity, in regard to process, how long did you spend preparing and writing Welcome to Paradise?

A.C. Medina: After the outlines stage the pages and drafts come out pretty quickly. Once I’m greenlit by a publisher I can knock out the series in a month or two, depending on how edits go.

CW: What was your inspiration for writing this series? And what separates this post-apocalyptic story from all the other ones?

A.C. Medina: I’m always intrigued or commonly annoyed by how most post-apocalyptic settings reflect or change our society. I think the established system in place is one that can adapt easily which I wanted to explore in Welcome to Paradise. You can point out some really horrible things that happen in order for modern day living to be the way it is, and I think in the off chance we all have to cram ourselves into a bunker like the one in our story a lot will change but there’s a lot of things that wouldn’t change and that’s what I wanted to explore the most.

CW: I already love the character, MCC!  She seems like she’s going to play a big part in Welcome to Paradise! Is there anything you can tell us about her character, her role in the comic, backstory, or anything at all about her?

A.C. Medina: MCC is awesome, Morgan who’s the artist and co-creator of the book created her. While not being heavily exposed in the narrative itself MCC is crucial to the experience of reading the book, which makes her as important. She keeps the madness in line and provides a bit of breathing room as shit hits the fan.

CW: Without, I guess, giving away any spoilers, can you brief the readers on what to expect on what’s to come, or what excited you the most while writing the story?

A.C. Medina: This is our love letter to all the amazing post-apocalyptic worlds and the different quirks that keep the genre exciting. Like I said previously, I wanted to see not only how society adapts when the modern world collapses but what remains the same from our previous society.

CW: Over the years, what are 3 of your top 10 favorite writers?

A.C. Medina: There are so many that inspire but right now three writers who I’ll read anything they put out right now are Rick Remender, Tom King, and Donny Cates.

CW: What are 3 of your favorite storylines?

A.C. Medina: As with writing when reading I’m big on characters and most stories I read tend to be more character driven ones. I really love the relationship between Mark Grayson and Robot in Invincible, for me, it’s a definitive rivalry as far as the superhero genre goes, without spoiling much I’d put their entire saga as one of my favorite story-lines. The last arc of Scalped will always be special for me as well, there’s a moment towards the last couple issues where we see the main characters we’ve followed in this wild ride, they each get a tight close up with a voice over, saying their last lines before jumping into the fray that always gets me. It will always be one of the most badass moments for me in comics, my last pick would be Punk Rock Jesus. It’s one of my all-time favorite stories and one of the final pushes that made me want to write comics.

CW: What was your “made it” moment?

A.C. Medina: For me a made it moment would be during con set up when you see other familiar faces in the industry and you all share the same small complaints or joys of tablespace.

CW: What’s the best piece of advice you’ve ever been given when first getting into Comics?

A.C. Medina: Read it all, read indie, read mainstream, read digital, read single issues, read trades. There’s so much to see out there and its criminal to limit yourself.

CW:  Also, outside of that, is there any kind of advice you would like to give someone trying to start writing in the indie industry?

A.C. Medina: Find the voice you want to write and own it, and keep things fun whether its what you’re writing about or your actual writing. If you’re not enjoying making it, chances are people won’t enjoy reading it.

CW: With the forthcoming issues of Welcome to Paradise, are there any other 2018 projects that you’re working on that you’re excited about?