Here’s the week in review in the world of DC Comics! I had technical difficulties this week and decided to do a week end roundup of the stories I missed, hope you enjoy!

The movie, of course, is based on the 1992 Dan Jurgens written and illustrated Superman arc of the same name, which features the villain Doomsday rampaging across the countryside, tearing his way through dozens of superheroes in the process before making it to Metropolis, finally it comes down to just he and Superman, seriously if you haven’t read it, do so! The book has been adapted loosely multiple times before, namely in Superman: Doomsday, and Batman vs Superman: Dawn of Justice, this version promises to follow the book much more closely, and will naturally be followed by a Reign of the Supermen animated movie. Reign of the Supermen details 4 heroes (well, kinda) who pick up in the vacuum left in the Man of Steel’s death. Death of Superman is scheduled for release sometime in 2018, and Reign will premiere sometime in 2019.

The artist tweeted to a fan Friday that Batman Earth One vol 3 is about 2/3 complete, and got put on hold in order for he and writer Geoff Johns to make Doomsday Clock, he confirmed that the upcoming volume will be released sometime after Doomsday Clock concludes, so likely in 2020 or 2021. Most recent in the Earth One series is the OGN Green Lantern Earth One, which came out 2 weeks ago on March 21st, next on the docket (according to Wikipedia) is Wonder Woman Earth One vol 2, written by Grant Morrison. 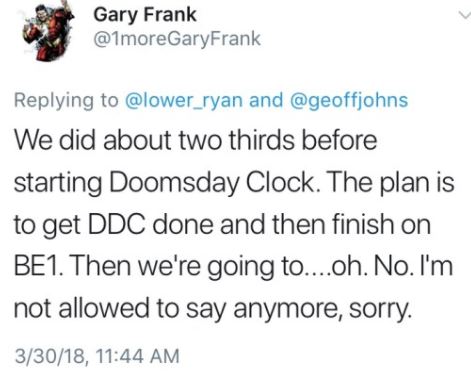 Julie and Shawna Benson to Write Green Arrow Starting in May

The writers of Batgirl and the Birds of Prey will be moving over to Green Arrow following the end of that title. Their first story will premiere in Green Arrow Annual #2 on May 30th, which features Ollie facing off against the Wall herself! Followed by the writers taking over the ongoing series in Green Arrow #43 in August, with interior art by Javier Fernandez 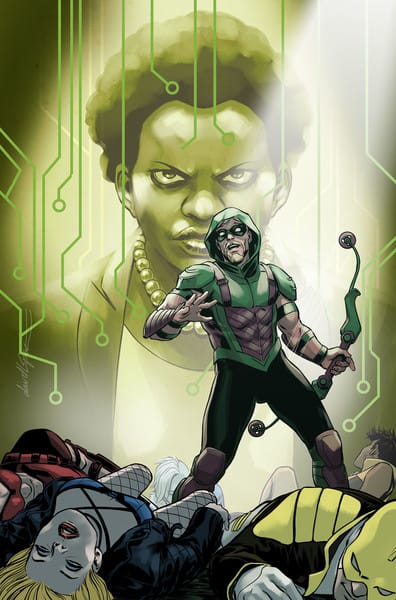 The writers had this to say-
“As we mourn the loss of our beloved Birds, hope in the form of an arrow has struck us through the heart with the opportunity to take on Oliver Queen, Ollie’s made a few appearances alongside the Birds since we began writing at DC with Rebirth, and we can’t wait to continue making our mark on the 77-year old marksman this summer. And we won’t be leaving our ladies behind! Black Canary, aka Ollie’s “Pretty Bird,” will continue to star in GREEN ARROW. We’re both humbled and flabbergasted, to follow in the footsteps of comic greats like Mort Weisinger, Denny O’Neil, Mike Grell, Kevin Smith, Brad Meltzer, Jeff Lemire, Ann Nocenti, and of course, Ben Percy. We’re honored to be included in their ranks and proud of DC for seeing our strength and for moving us over to GREEN ARROW. Joining us in August is the amazingly talented Javier Fernández on interiors and the masterful Alex Maleev on cover art.”

If anyone ever wants to contact me, look me up in my group for the love of comic books , I also have several comic pages dedicated to my various true loves, Batman, Superman, Indie Comics, Spider-man, Marvel, Oldie Goldies and Hats! (Long story on that last one haha) or on Twitter @johnbatusijack