COMMENTARY: On VALENTINES DAY, Whose Love Truly CONQUERS ALL? 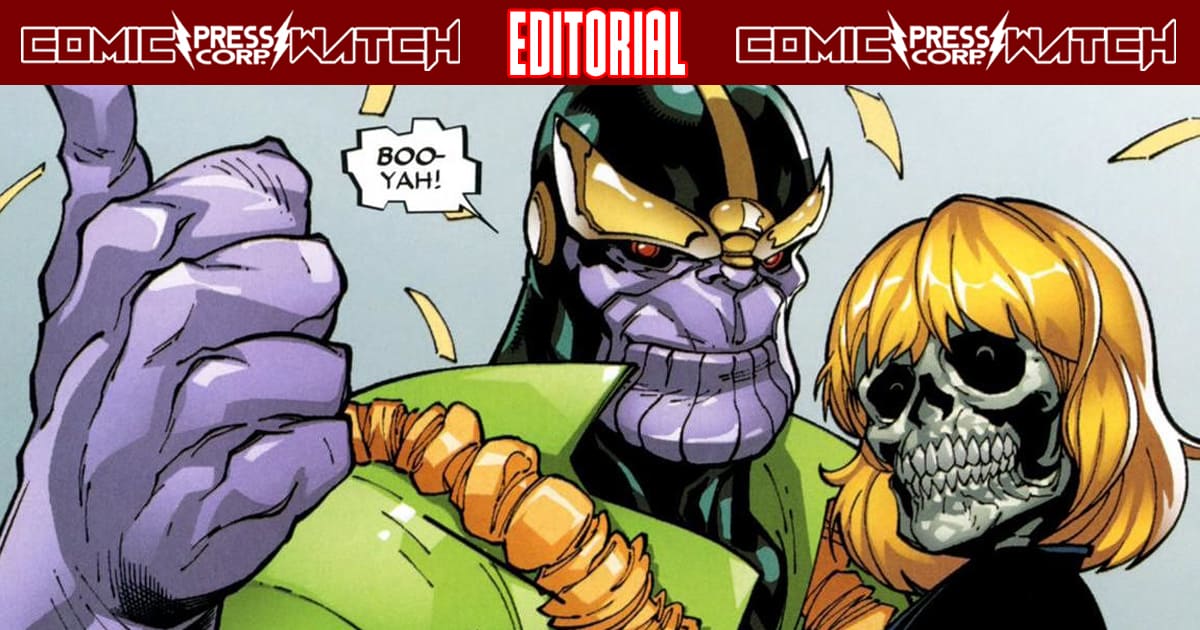 Yep, it’s that time again…Valentine’s Day!  The day that we all show appreciation and love to those we hold dear.  Outside of the occasional game of risk, few of us will ever try conquering the world…but something we do know, is what it means to be in love, and be willing to go to any length to gain that special someone’s attention! 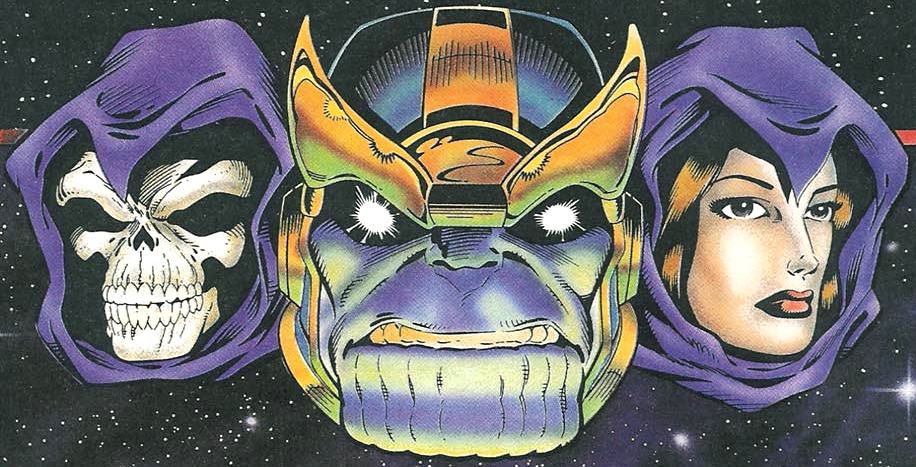 When thinking of the comic genre, there have been so many ongoing romances amongst so many great titles.  Choosing one particular romance has been extremely difficult with all the great love stories, involving incredible characters, such as Peter Parker (Spider-man) & Mary Jane, Jessica Jones & Luke Cage, Kitty Pryde (Shadowcat) & Pyotr Rasputin (Colossus), Jean Grey (Marvel Girl) & Scott Summers (Cyclops), Clark Kent (Superman) and Lois Lane, and so many many more…., but this particular Valentines Day, it felt appropriate to revisit an ongoing cosmic romance! 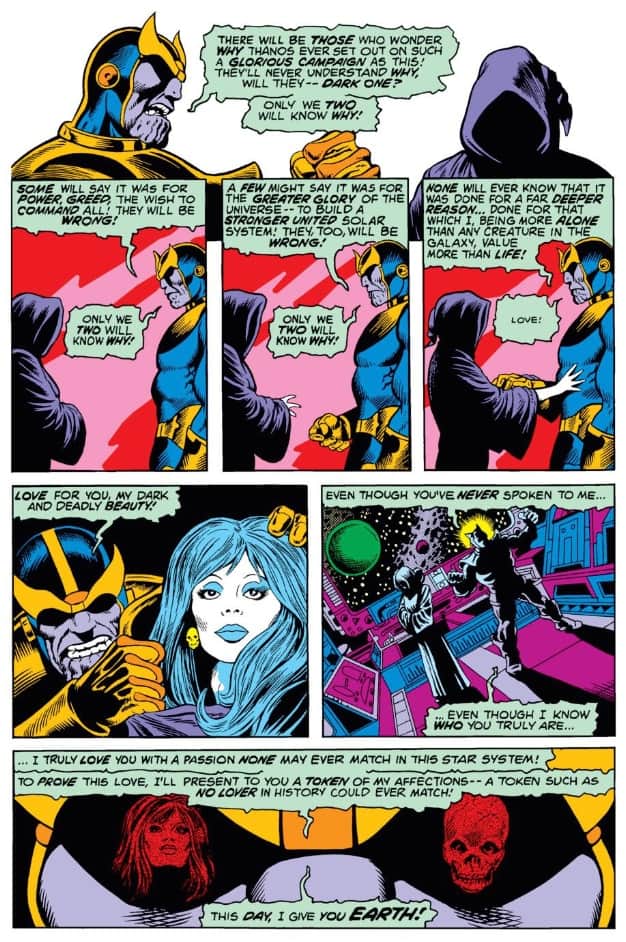 A romance as twisted, as dark, and as evil, but still, recognizably, a true love story and everyone knows when people…[term used loosely here]…are in love, they will do crazy things….for instance offering ones love the earth as a token of affection, but with the quickly approaching Avengers: Infinity War film coming, it only seemed appropriate to look back, at the ongoing, feuding love story between the Mad Titan, Thanos (Dione) and his one and only true love,..[not to be confused with his insatiable lust for POWER]…the one and only Mistress Death (Lady Death, Lady Chaos), who surprisingly after some research gets around a little more than one would think, but that’s another story. 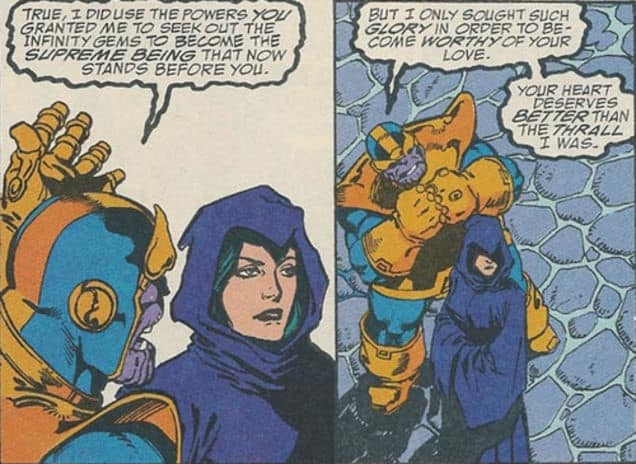 The most popular story of this ongoing tryst takes place in the pages of Silver Surfer and Marvel’s classic The Infinity Gauntlet, a miniseries written by Jim Starlin, penciled by George Perez and inked by Ron Lim published in 1991.  At its heart, the love of Mistress Death is what Thanos yearns for, with the power of a God, the one thing that is withheld from him.  But even before the epic gauntlet, Mistress Death often appeared to shun her would-be-lover, teasing him, one of the only entities in the entire Marvel cosmos to play Thanos for a fool.  Before Gauntlet, Thanos’s spirit gets abducted by Lady Death and gets pulled to Death’s Castle, where he is opposed by Lady Death’s Legion and after defeating this Legion, she explains to the ‘Mad Titan’ why she hasn’t fallen in love with him, which is simply because, by virtue of being an ‘abstract’, she was always meant to stand alone and not be in debt to anyone. 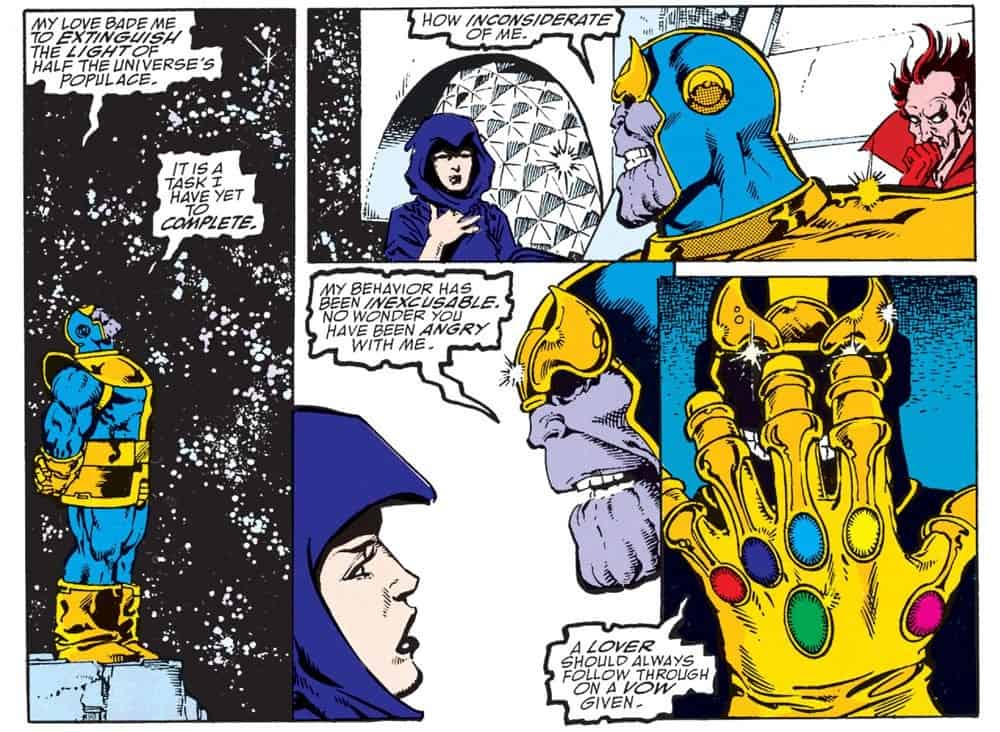 When your Thanos, this isn’t reasonable, as he prefers to think he deserves whatever he wants.  Thus, in my opinion, one always wants more, that which is denied him.  No one wants the easy to get, at least, I don’t!  Her rejection made Thanos even more determined to prove his worth.  In a cruel twist of fate, Thanos obtained absolute omnipotence, GOD-Like power, in the form of the Infinity Gauntlet, only to find that Lady Death still would not address him, this time due to the fact that Thanos was now superior to her.  Talk about a woman who cannot make up her mind, but I have to give it to Thanos, killing half the universe is quite the gesture of love when one is trying to win a ‘woman’s’ heart! 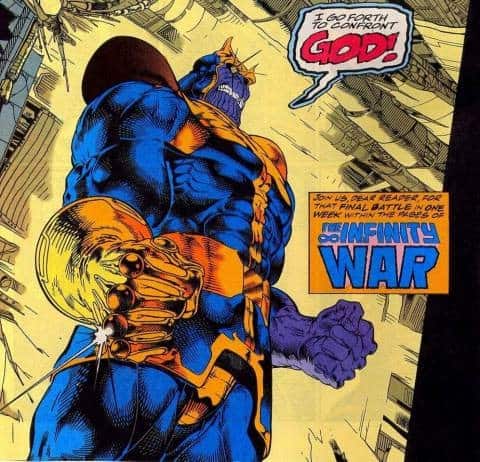 Obtaining the Infinity Gauntlet brought about nothing but more heartache for our poor Thanos.  In a truly dark twist, and one even a foe as deviant as Thanos didn’t deserve, he was eventually defeated by another death god known as the Walker, whom Mistress Death had ‘cheated‘ on Thanos with!!!  Ok, its Valentine’s Day, Thanos, you become a god, you wipe out half the universe, and she plots your defeat with an ex? Are you for real? Mad Titan, or punked out?  I’m really feeling for my man Thanos right now! 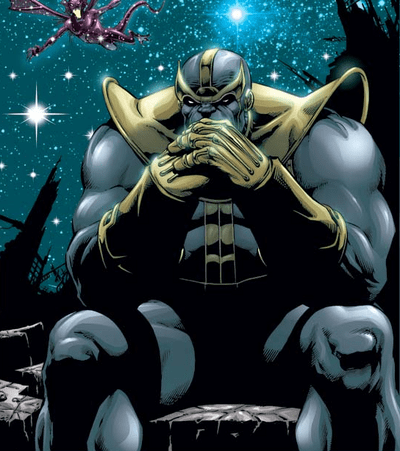 The story goes on, and still continues to this day!  The point is no matter how much you love someone, no matter what feats of greatness, or horrible terrifying schemes you devise and pull off successfully,  love is not guaranteed!  Unrequited love is painful, and no-one, not even on Valentine’s Day, is worth destroying half the universe for, only to be snubbed by an ex-boyfriend!  My advice to Thanos, this February 14th, go find someone new to chase, because when it doesn’t work and your playing at the level of God’s, someone is trying to tell you there are other fish in the sea, yes Thanos, a bitter pill to swallow my friend!  Good luck this Valentine’s Day to ALL!  May your loved ones show you love in return and let’s not have any earth-shattering events today! 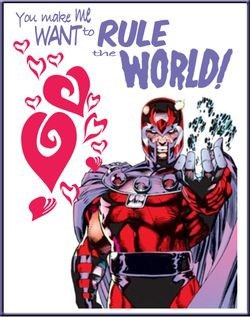