From 2001 to 2004 Grant Morrison (The Invisibles, Batman and Robin) and team of pencilers, inkers, letterers, editors and colorists, including Phil Jimenez, Mike Marts, and Frank Quitely made a comic called New X-Men.

Revitalizing the X-Men as a politically savvy, fashion-forward superhero soap opera, New X-Men was published by Marvel Comics as the flagship of a line wide revival.

Part 13
What’s the Mutant Meta For?

Examining New X-Men could never be an objective book, firstly because I do not believe in them. I could never write a universal coverage. By the end of this book, I hope you and I both have more questions and more avenues to explore or declare dead ends and turn around, not fewer.

I cannot speak at length about infidelity, though it is central to the longest subplots in New X-Men. Sexual infidelities, real or in fiction, do not preoccupy me, and largely rank, in my moral gauge, as lies.

I do not want to type out a tell-all trashing anyone who worked on the comics, and stories I have been told in confidence need to stay in confidence. I would be afraid of slipping. And, of personalizing fights that were not my fights, not my dogs in the fight, and maybe not even dog fights.

So, this is, as you can tell, a book/series about my interests in the New X-Men run that Grant Morrison wrote for Marvel Comics, and we keep it there. Nicely subjective.

I spent my life in and out of hospitals, born premature with a stopped heart, immediate for surgeries and special care. I had other surgeries, for ears, for genitals, for nerve damage, organ damage, across my childhood and young adult years. I grew up knowing I was intersex, that I had cerebral palsy, that I had a heart full of holes sometimes prone to its own little electric dances. Doctors continually braced me for a death that they always seemed to just put off a few more years.

I was on beta blockers and hormones during the New X-Men years. I prided myself on being able to sleep in any circumstances and to walk farther and steadier than anyone.

I am not sure that people who came up after 2000 can feel how much that date felt like future. Computers felt like the future. I remember the first time a video clip played smoothly on a computer for me, not using it just as a monitor, but wholly on and inside the computer, and that was magic and the future. I worked for a television studio, during those years, and they were shifting to digital and I grabbed every editing bay and syncing device they were throwing out, because having the machinery felt like future and magic.

The 1980s New Defenders, which was an X-Men adjacent book before there were many X-Men spinoffs, hosting three of the original team, was so formative in my life, as a comics fan, as a fan of mutant books, as a human being, that all my X-Men understanding really spins firstly from Defenders. And, Defenders was more politically savvy and more blatantly aware about bodies and sexualities than Uncanny X-Men in the late 70s and through the 80s. I love many Claremont comics, I adore the Louise Simonson X-Factor and New Mutants, but on introduction, reading issues sometimes out of order, irregularly, as a child, Claremont’s version of sexuality was, like John Byrne’s, dragging a woman through muck until she stood up in a sexier costume or the team visits whoever has kidnapped Storm for sex purposes. Doom. Dracula. The Hellfire Club. The Bizarre Adventures short, Phoenix (Claremont, Janson, Buscema), is unique in that Storm is not involved, and it is Jean Grey and her sister who the villains (Atlanteans) are kidnapping for sex purposes. Simonson’s comics are subtle and smart, probably smarter than the Defenders runs, but they also went over my head sometimes, at the time, or I intuited things and then felt very uncertain about my intuition. Was Rusty Collins bisexual? Was Skids? What was going on between Bobby and Opal? 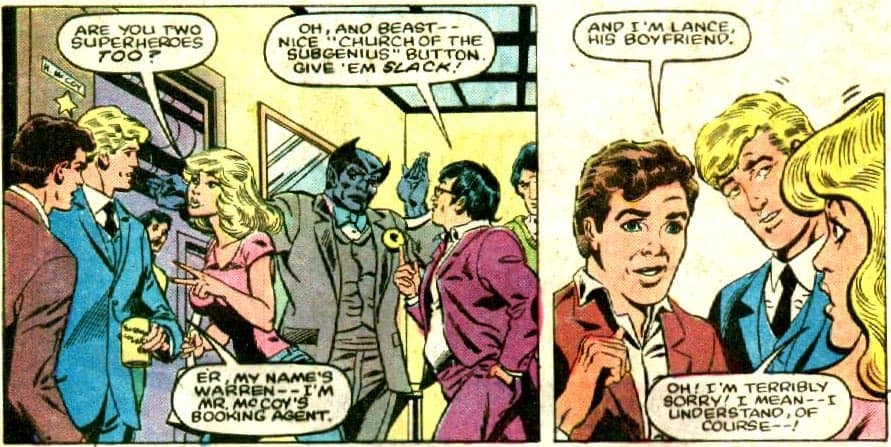 New Defenders would simply say things in words other comics could not, dealing with Cloud’s existence as a man and woman openly and directly. Having conversations about it between characters, with a frankness that not even New X-Men, decades later, would touch in depth or honesty. Iceman called himself gay in that run, way before he would officially come out and decades before his friend, Beast, would make a similar declaration that is still up in the air.

X-Men comics can feel insular and impossible to find a way into more than nearly any other franchise in comics. New X-Men was a conscious, committed attempt to circumvent that tendency and I will always be thankful, even though by then I was, myself, pretty deeply enmeshed.

New X-Men should not be the end of good X-Men comics. It should not be the beginning of them. Matters of taste, either way,  but what it is, is an open door. And, it is a time capsule of concerns, of prides, of situations and feelings in those years. 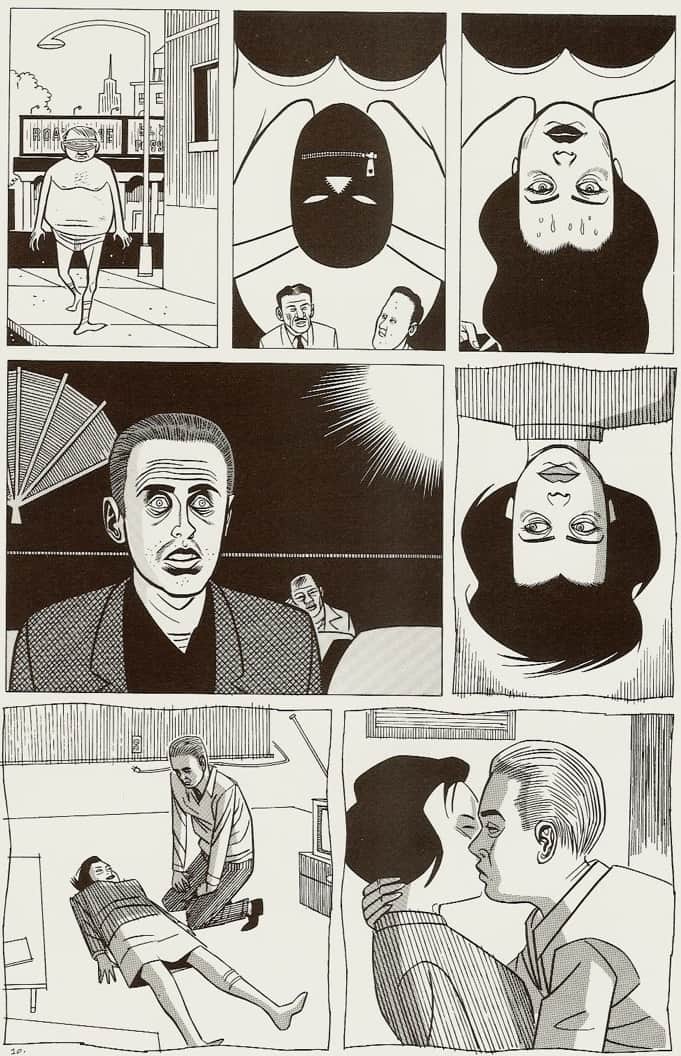 I remember, Masked and Anonymous, the Bob Dylan/Larry Charles movie, coming out during the New X-Men years, and it felt like a New X-Men movie. Zwigoff’s Ghost World felt like a New X-Men movie, maybe even more than it felt like a Daniel Clowes’ movie, though, in honesty, Clowes and New X-Men are never a million yards apart, are they? New X-Men owes a lot to Like a Velvet Glove Cast in Iron. The Caveman’s Valentine. This rush of deliberately unreal movies, like the Matrix sequels, Moulin Rouge, Vanilla Sky, Session 9, for good or bad, ill or well, there was a malaise in the air and in our zeitgeist’s soul. It is not that New X-Men made these happen or inspired them. New X-Men was on the wave. It rode and was part of the wave, a thing we were ready for.

Rereading New X-Men to write Examining, everything, again, now, becomes shades and subsections, reflections and refractory of the comic. An irrevocably flawed comic. A four year serialized anxiety. A letter for help, a letter for love, thrown out into a waking violet sea under skies of flame. And, flame may be loving, but what it does is burn.

For fans who seriously embraced it, it made the other X-Men comics feel tangential, maybe intangible. I cannot draw you Lifeguard of X-Treme X-Men from memory and on rereads, I skip as much of Austen as I read. Ultimate X-Men is a blur, though I think it’s funny they reuse the bit of a psychic getting through with a fake FBI badge that is actually a Blockbuster rental card from the mid-1990s Generation X movie.

X-Force had become X-Statix and seemed evermore liminal and best off for it. 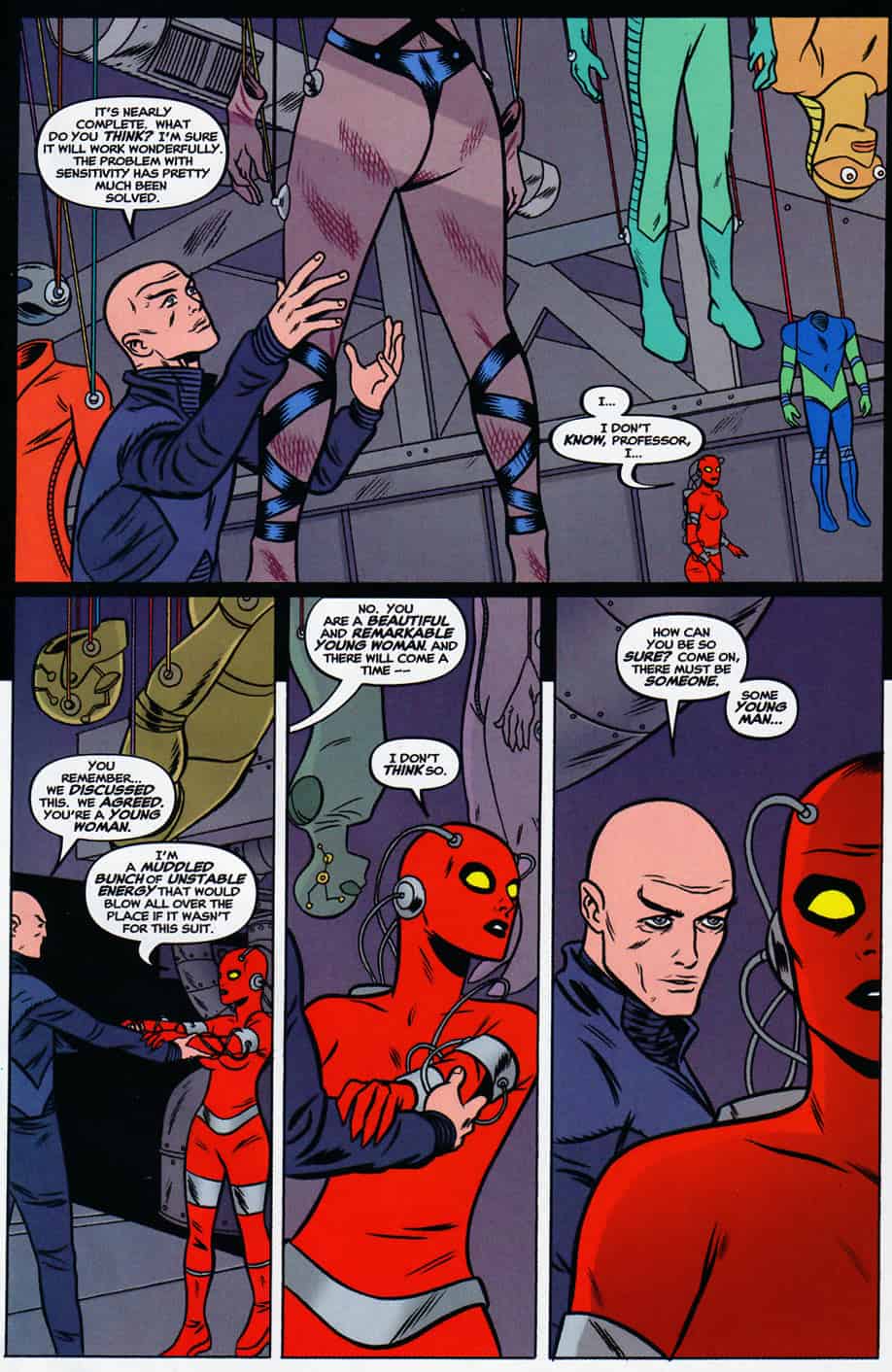 The hard disregard which Marvel showed for New X-Men as soon as Morrison had left was shocking then, and rough to revisit now. It caused them infinite problems to do it, so, why?

Even the series that mimicked traits from New X-Men, like the Joss Whedon series, were so up their own ass incestuous they resurrected a dead man just to portray him giving nearly-religious orgasms to a girl he courted when she was thirteen. The artist is an accomplished draftsman, intelligent, detailed, and has a great eye for mise en scene, but the pages looked like dead people, zombie trademarks walking through movie sets recalling heydays.

The few nonwhite characters would quickly find themselves with lighter skin or thinner, and in Dust’s case, in religious attire that covered most of her but managed to cup and highlight every curve of every part of her body. Dust was so generic, that in X-Men: The End – another comic I promise you I actually love and is sincerely brilliant in many respects – an evil clone of Jean Grey disguises herself as Dust by dressing like her, and nobody can tell the difference. All Dust was, was a Niqab and occasionally a teachable moment for a “modern” American character, and consistently she is either a betrayer or cast as one in red herrings.

What was it for? It is for to still be there. All those New X-Men comics remain. They are consistently in print, in digital forms, consistently available and consistently referred to by other comics, by fan communities, by criticism and reviews. Those collections, digital editions, omnibuses and paperbacks and memories remain secure and available, as welcoming now as ever.

The generation who might get it right, be those the students at the Xavier Institute like the Stepford Cuckoos, Beak, Angel, and Dummy, or the far future X-Men, the Proud People, the Termids, they will never fully come of age, never really age out. Wolverine is still there one hundred and fifty years into the future, in Here Comes Tomorrow, and Quentin Quire, dead, comes back in Here Comes Tomorrow, too, because nobody really dies and nobody really gets out. Nobody gets too old. The old come back younger and sprier. The kids relativize into a middling age that is neither kid nor adult and they’ll function there whenever they are needed.

Walter Morrison, father of Grant Morrison, died in 2004, at the age of eighty. An impressive man, in the 1940s, he was charged with inciting treason, brutalized  in military prison, and he spent decades protesting nuclear risks and nuclear weapons.

In Grant Morrison’s final New X-Men issue, published with a cover date of one month after their father’s passing, death is defeated, détourned, and redirected.

Penciler of two of the finest issues of New X-Men, John Paul Leon, has recently passed on, after a battle with cancer. There is a collection taken up in his name, to help his family.

On every page of New X-Men written by Morrison, drawn, colored, lettered, edited, published by several different hands, death and sex permeate, the two central mortal conditions besides sitting on your butt, and that may be a merger of the two.