Examining New X-Men Pt. 14: How to Get There to There

From 2001 to 2004 Grant Morrison (The Invisibles, Batman and Robin) and team of pencilers, inkers, letterers, editors and colorists, including Phil Jimenez, Mike Marts, and Frank Quitely made a comic called New X-Men.

Revitalizing the X-Men as a politically savvy, fashion forward superhero soap opera, New X-Men was published by Marvel Comics as the flagship of a line wide revival.

Part 14
How to Get There to There 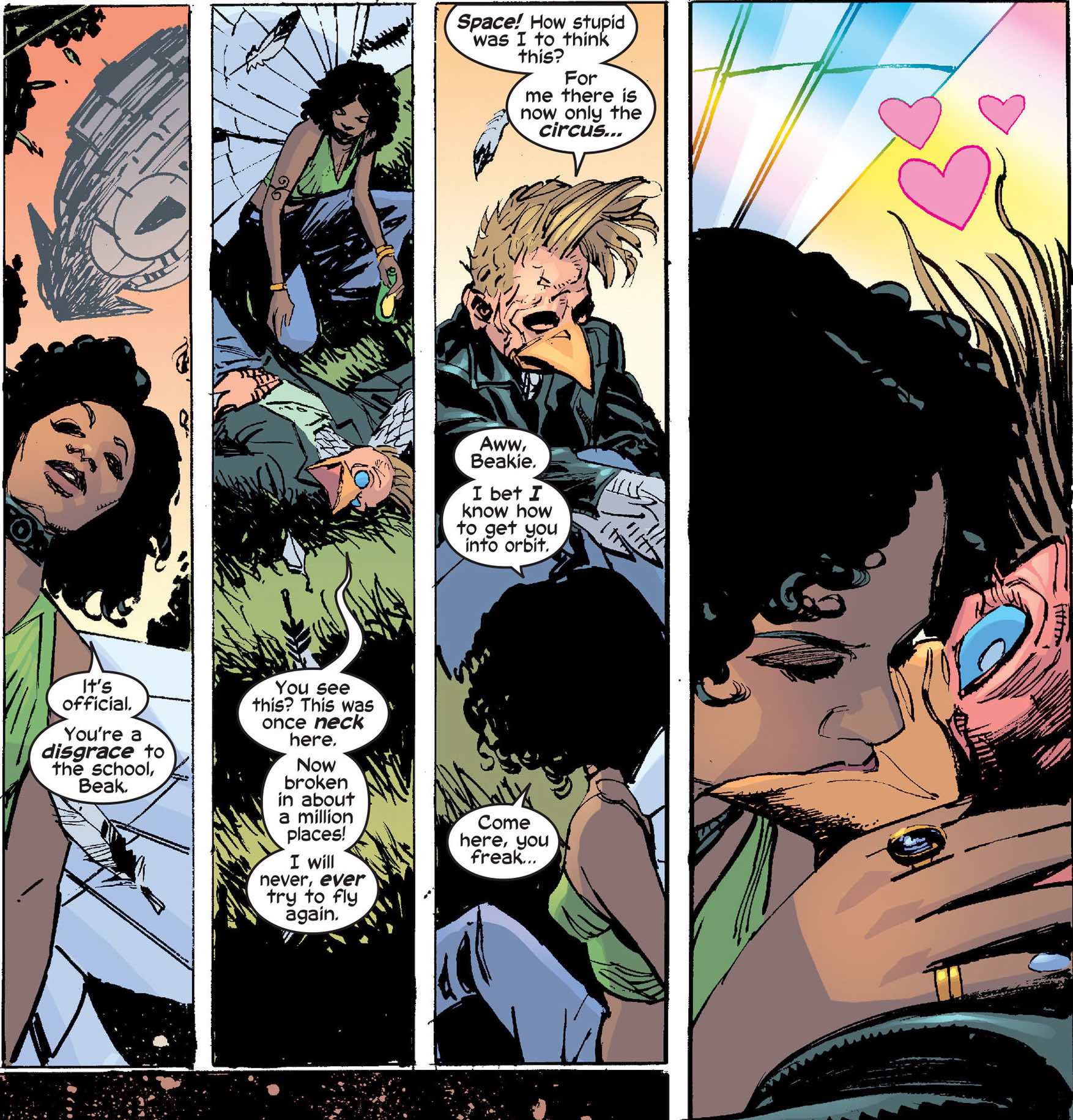 Tastes, technologies, cultures, subcultures, politics and landscapes have changed since New X-Men serialized issue by delayed issue. The seriality is now nearly immaterial; academic in that dismissive sense. If the issues were remade today, they would not be written, colored, drawn, inked, even shipped or printed in the same ways as they were then.

Serialization, alone, can make a story’s internal time feel lengthier. We may have imagined a Magneto-conquered Manhattan stretching over weeks or months, and not the three days it is. Cyclops’ inability to use his super power lasts nearly a year of serialized issues, but in their world, it was not even a week.

Twenty years on, New X-Men is a block, and not just a block like it is a large omnibus – there is one! – but a city block. A bloc of nations. One of those square Bizarro planets. The cube universe Qwewq of many Grant Morrison comics at DC Comics. It is big and projected and semi-opaque. All surface and more complex on the inside than the out. A Rubik’s Cube. An ultra cosmic membrane.

Morrison has talked regularly of treating the physical comics pages, or their digital or conceptual equivalent, as planes of a lesser-dimensioned reality, fit within ours. As windows and Petri dishes and slices of timespace. Bill Sienkiewicz has spoken of being cautious not to overwhelm John Paul Leon with his signature inking style, when he inked Leon in New X-Men, and how those pages had to be thrown out, so that he could apply more of himself over the pencils, at Leon’s request. 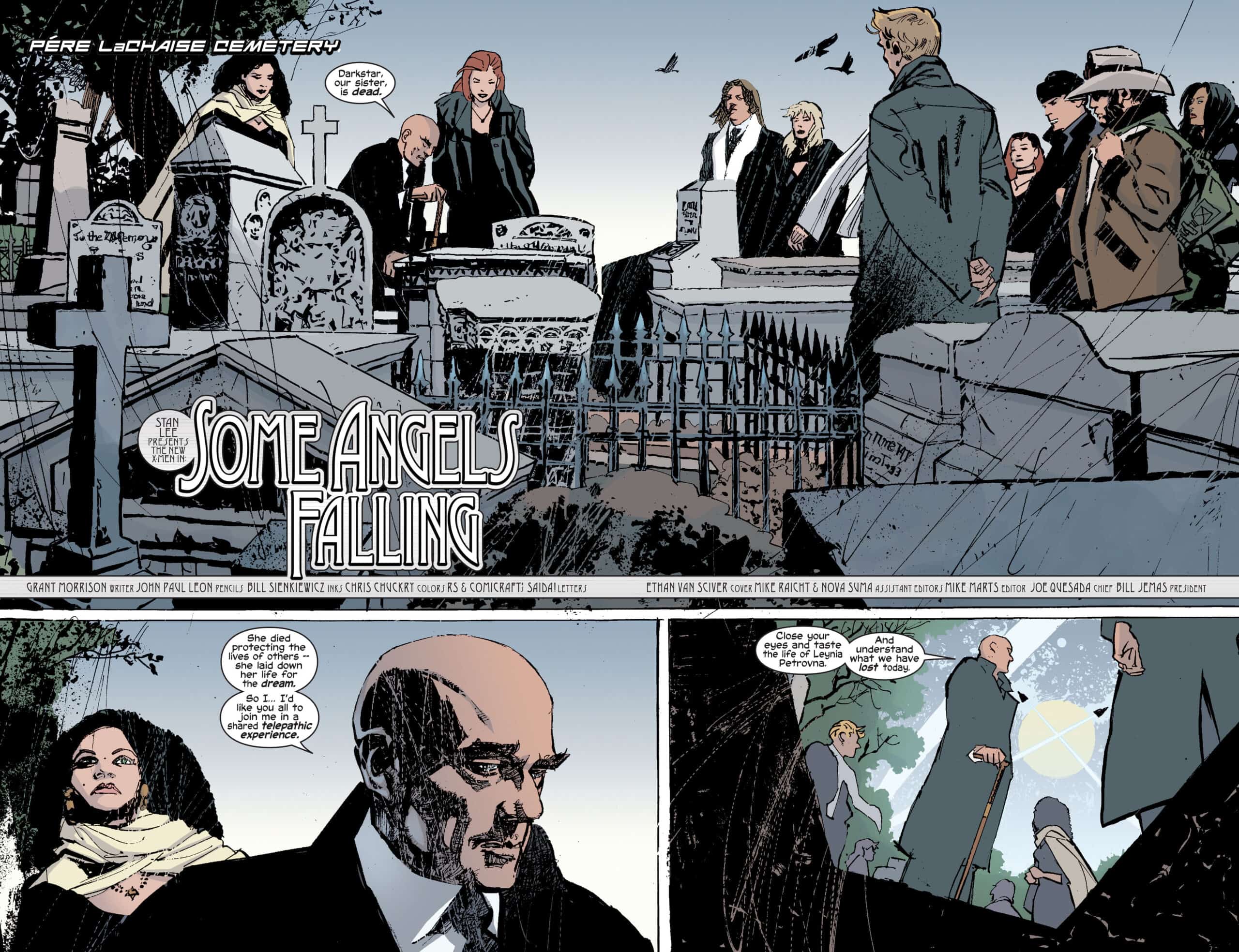 Ostensibly, Morrison had choice of pencilers, though in practice this turned out less true, and many pencilers requested specific inkers, many of the teams of specific issues preferred a colorist or letterer to another. New X-Men comprises planes of invested collaboration, rush jobs, and frustrated working in tandem, just as the characters in the stories commit to. Any long run on a serial comic turns into an impressionist diary after awhile, but never of only one contributor.

There is a four page sequence, in the New X-Men chapter/issue Fantomex (drawn by Igor Kordey, written by Grant Morrison, colors by Dave McCaig, lettering by Saida Temofonte), which deals with Corporal Animal, a Marine in an international paramilitary group arriving in black helicopters, that is ethically central to all of New X-Men. But it was, at time of release, derided as a Garth Ennis idea that escaped into the wrong book, too cartoonish, too Brechtian or too Captain Planet.

A scene that is scary in a thriller kind of way, slapstick on the surface, becomes fridge horror after you sit with it, and also incredibly uplifting.

As the militants roll into the X-Corp office building, holding their weapons on a receptionist, seeking out our familiar characters upstairs, that first page takes our eye down the lefthand side, into an insert, then back up the middle all the way to the very top of the page, to bring our eye back down across the far right of the page as Corporal Animal rises and pushes his way past the others to volunteer as someone “with no mind of his own worth controlling.”

So, this is humanity, this is the non-mutant human being, this is the militarized man. Machine. Animal. Death. Come for our mutants.

Our pessimism runs high. Our suspicions.

It was a long time before I realized that scene is not only about recruitment and militarization in the broadest senses, but about Wolverine, and about Xavier’s own child recruitment method operandi.

“It’s all misdirection,” says Fantomex at the top of the second page, as Corporal Animal reaches the door, blocking the path of Xavier, Grey, and Fantomex’s escape. The stacked panels push us down as Animal bears down on our three.

“I am your death in human form,” he says, licking his lips.

Pressed all the way to the bottom of the page, as if caged in, Fantomex stands in front of our two telepaths, and offers them one more chance for pacifism before he just shoots him. 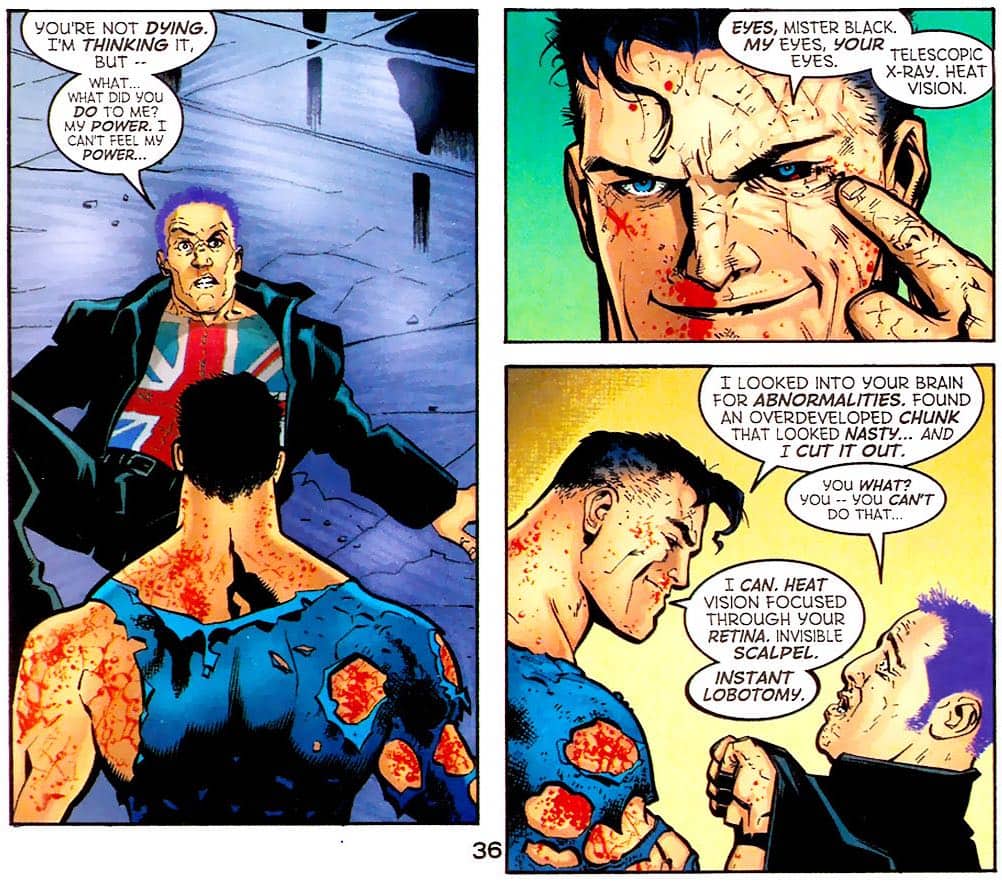 This is the era of The Ultimates. This is the era of The Authority and What’s So Funny About Truth, Justice, and the American Way?, a comic in which Superman wins by having the vilest threats and bully posturing. A sexist, nationalist Captain America is being called “realistic” and “what we need.” Had Morrison, themself, not tethered their identity so closely to their gun fu millionaire author character, King Mob? Had they no hand in Skrull Kill Krew, Marvel Boy, and Big Dave? 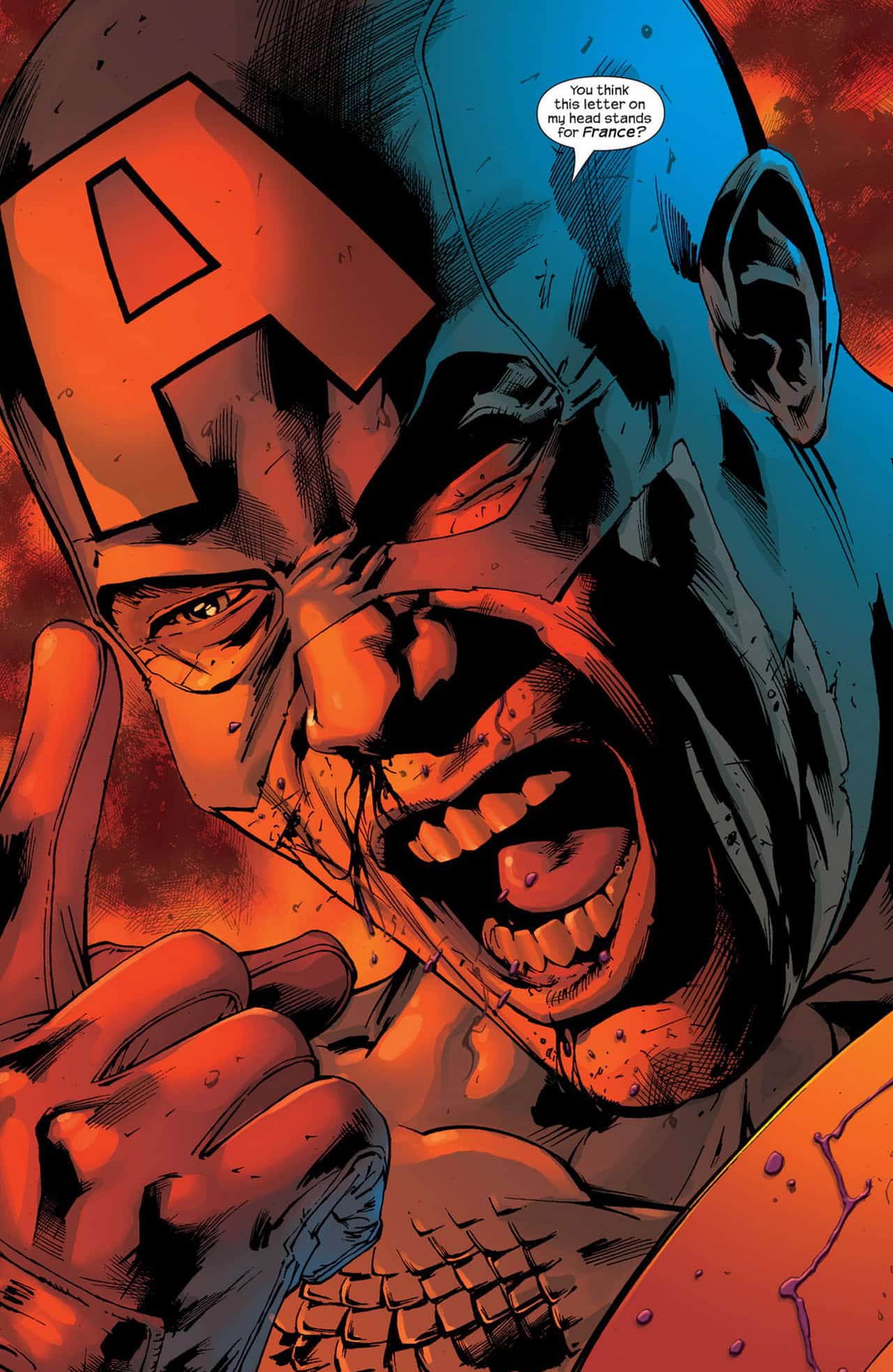 Now, we do not know, if this is our first read, that Fantomex is, indeed, not a mutant, but a modified human, a human born and designed to be a soldier, part human, part machine, made for death. This is soldier versus soldier, machine versus machine, but that, too, is pessimistic, is it not? The nihilism still rings.

Page three opens with the invading militants insulting French culture while still holding machine-guns on an unarmed receptionist, who is remaining very cool. The panels take us down the left of the page, so that we notice Animal, sitting on the floor, before we read the panel above him, of his fellows discovering him.

The fourth page, Animal speaks to those fellows, but he turns to us to do so. He speaks directly to us of his father, his childhood, of pain in his heart and anger at his father and shields you build around your feelings. He considers changing careers. Working with handicapped kids.

What one or both of the mutant telepaths did is help him, help that might otherwise take years of therapy. And, they did him violence. What they have done is a violent act towards an opponent. They have shaken the basics of his life, derailed his career, and altered who he has made himself.

Who Animal is, is the person we saw in the first pages, the child he speaks to us of, and how he is, sitting on the floor, legs splayed, considering being better. Corporal Animal was never a “death machine with no human feelings.” That, too, was all distraction, but it was distraction he made for himself.

And, it is a distraction, for us, the entire scene playing with our attention, our focus, to let better ideas, difficult ideas and feelings slip in where we were unguarded.

The art and storytelling in New X-Men can be vitally subtle especially when the most unsubtle eye pulls are on-panel. 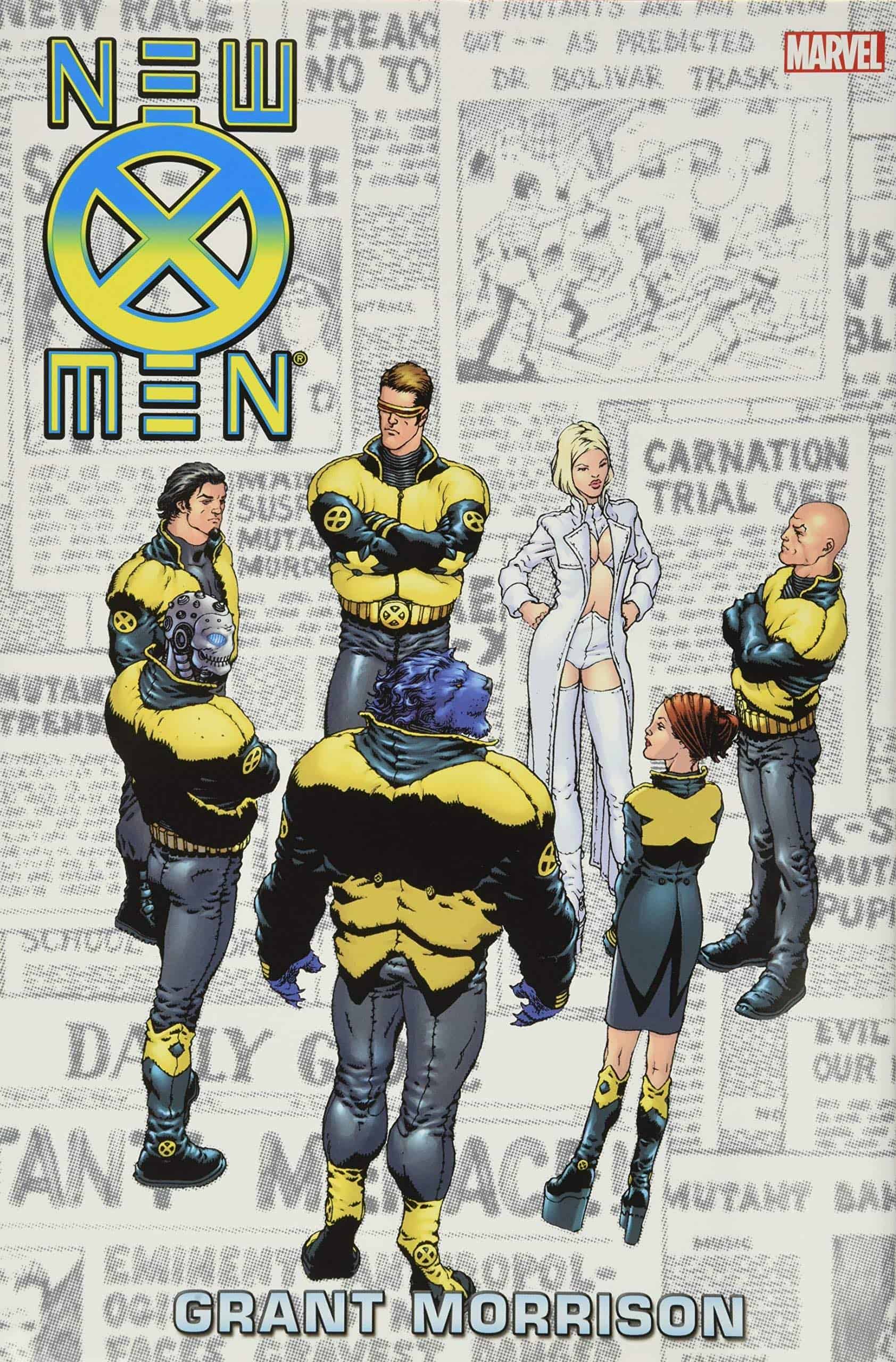 New X-Men generates more questions than it gives answers. The cover to the omnibus is derived from the cover of the teaching children about fractals issue, a beautiful Quitely piece with the teaching staff of the book standing superimposed in a circle, looking at one another, an array of newspaper clippings about mutants collaged behind them. It begs questions and gets to the soap opera heart better than a fight scene or the team posing for a shot they might put up on the Xavier Institute Twitter. They all look thoughtful, but they are not having a dispassionate conversation. Three of them have their arms folded over their chest, forming a triangle within the circle, Emma Frost has her fists on her hips as she looks at Charles Xavier. Jean Grey and Beast are not even acknowledging the others, looking to each other with extreme head-turns, Jean holding her arms low in front of her. Wolverine, all the way across the circle from her, stares at Jean. Or, is Beast looking past Jean at something outside the circle? Why is Cyclops eyeing Wolverine so intently?

You feel the dynamics of these characters before you, maybe, even know who they are. It is an incredibly communicative cover, irreducible to evil vs good or pairing off the two women to contrast each other. Xorn (Magneto in disguise) and Charles Xavier have the same posture, same body language. Cyclops’ posture is between Xavier’s/Xorn’s and that of Emma Frost.

Especially because of the extreme angle, they seem so unnatural against the newspaper excerpts, notices of “mutant menace”, of mutant criminals, of the murder trial of a mutant, and predictions of mutants enslaving humans. The title of the comic is pushed off the the upper left corner, the only credit present, that for Morrison, at the very bottom, and, at the upper right corner, a stray rectangle of red and white notifies us that this is a Marvel comic, while looking fairly lost and concessional.

As a fifth-generation comics reader (of a now, six generation comics-reading family), I am so used to artists changing issue to issue or editorial diktats causing style shifts, as we see in New X-Men with Wolverine briefly sporting a dramatically different hairstyle and a beard, that the shifts rarely distract me from the story. I am not sure I have ever once been completely yanked out of the story.

When New X-Men was fairly new, still, I was living off and on with a a guy I would work on projects for Disney with, and later, Chris Kattan and MySpace, and he was not a big comics reader. His grandfather, a jovial man who had worked on I Love Lucy, had given up comic books and drinking Coca Cola in the home, in order to marry his wife. He went back to Coke, at some point, but had stayed off comics, and that abstinence passed down the family.

We are reading New X-Men together, me kind of over his shoulder, and it is his first time. He gets to the scene where, in a psychic projection, Cyclops and Emma Frost are taking off their clothes, which ends an issue on Scott pulling his shirt off, as illustrated by Frank Quitely, in this buff, feeling his confidence way, and picks up the following issue, having been discovered by Cyclops’ wife, Jean Grey, just as their tryst was heating up. The new issue, the penciling is done by Phil Jimenez, who draws the most fantastic uncomfortable Cyclops you can imagine. This is exacerbated, because he knows he is in trouble; he is in a panic. But, Jimenez also draws Cyclops much less muscular.

“He went from my type to not my type between issues!”

No matter how articulate your comic, how carefully you make the choices that should allow everyone comfortable entry, there are some things you can never universally control, and one of those is how turned on someone might be by Cyclops.

The rejection by many of Xorn’s true identity as Magneto, is another.

Some people never get past the black and yellow costumes.

Examining New X-Men Pt. 14: How to Get There to There