From 2001 to 2004, Grant Morrison (The Invisibles, Batman and Robin) and team of pencilers, inkers, letterers, editors and colorists, including Phil Jimenez, Mike Marts, and Frank Quitely, made a comic called New X-Men.

Revitalizing the X-Men as a politically savvy, fashion-forward superhero soap opera, New X-Men was published by Marvel Comics as the flagship of a line wide revival.

It can be said that some small amount of hypocrisy is necessary to the human condition. What amount, what degree is small, is a gauge varying from person to person. Is that is the human condition? Maybe, particularly, if we know we can grow out of it.

In New X-Men, Grant Morrison, along with the artists, letterers, colorists, and editorial staff, explorers levels and layers of hypocrisy. Hypocrisy that makes the world go round, and the kind of hypocrisy that can burn the world down.

Morrison inherited characters prone to being hypocritical, characters with an essentialist commercial sell that may not gel with the precise actions and events of comics serialized over decades. They combined these complicated histories with new characters who played to their interest in liars, self-loathing, and melodrama, resulting in a tableau In which no one can live up to their self-image for the expectations that others have of them.

No one in this world, is the sum of their doubts about themselves or the hopes others hold about them. A world where spirit, mind, physicality are tethered, people are both actions and aspirations. Individuals, group components, with a place in time.

Dr Hank McCoy self-demonizes. Not a trait created by Morrison, but one that New X-Men explicitly tied to a bipolar disorder, in the first run in years to address his dysmorphia at length and with compassion.

Dr McCoy, the Beast, sees foremost his failings or what he perceives as failings, and assumed, so too, do others. Beast is not a hypocrite, but he believes he is. His imposter syndrome, his in-turned ableism, the abuse he has suffered and heard from others, from the most grandiose attempts at dehumanization to the idle micro-aggressions, have driven him to presume that if anyone feels positively about him, they have somehow been fooled.

Beast will play host to the final and first villain of New X-Men, Sublime, because Sublime is a nagging voice of doubt, an incriminating whisper in the heart, a resounding conviction stabbing the mind. And, of all, Beast is deeply susceptible.

Emma Frost’s protection against being a hypocrite, is the cut herself off at the pass. Frost demonizes herself, fighting her own or to do good, and acting out overcooked supervillain behavior, from snide remarks and veiled threats do instigating an extramarital affair with Cyclops, and her history of violence and criminal actions.

In a unique turn, it is Frost’s villainy and her hardness, that are hypocritical. She is a good person, caring, helpful, smart and eloquent. She goes out of her way to make sure people don’t figure that out. She has done many terrible – genuinely terrible – things, in the service of avoiding self-reflection.

Further, her excuse of drugs or drink for her villainous behavior is a hypocrisy both thin and common. She is a rapist, a kidnapper, a thief, a war profiteer, an abuser of children, a murderer… And she no doubt expects more strait-laced characters, like Cyclops, to take that ball and run with it.

When she is traumatized by the genocide in Genosha, Frost’s body generates new mutations, protecting her physically, but also protecting her emotionally. In her diamond form, while her body is diamond hard, yet flexible, her emotions are arrested, guarded, and her telepathy shuts down, preserving her from outside harm and from internal self-rumination, self-incrimination, so long as she can stay diamond-hard.

Cyclops, who Grant Morrison names as their favorite X-Man, is the most central through-line to New X-Men, along with his wife during the run, Jean Grey.

Both Cyclops, Scott Summers, and Jean Grey, or Dr Jean Grey-Summers, or Phoenix, are hypocrites. They are astonishingly, profoundly hypocritical.

Everyone is. Life, in some fashion, is a blanket woven of hypocrisies, from the tiny to the extravagant. And, everything else that goes into life.

Scott Summers, Cyclops; Cyclops takes the cake. Repressed. Traumatized. Shy. Very good at talking himself into what he wants. Cyclops is the brave, direct, cool as a cucumber superhero, but he pouts like a child, he runs away, he avoids confrontation he cannot shoot with red beams of force and heat that come out of his eyes.

Only weeks after assaulting his wife while possessed by En Sabbah Nur – months real time as the serial comics released – Cyclops cannot even converse with his wife without strangely defensive rhetoric, practiced speeches, and come at me bro body language in an attempt to portray himself as the meekest, mildest, and least calculating.

Jean Grey and her husband have an argument over priorities early in New X-Men. Grey frequently positions herself as more mature than her husband, more or as mature as anyone else she is near. She affects an air of being above petty concerns like exhaustion, hero worship, horniness, jealousy. As much as Emma Frost attempts to make a devil of herself, Grey is trying to gild her own lily.

Jean Grey knows she has committed genocide before. And, she knows that she may be as close to a god as anyone. She has felt the burning life-altering power, she has felt every wingbeat of the birds in the air, and the cosmic songs of radiation. She has been the Phoenix, felt the Phoenix, known the Phoenix. 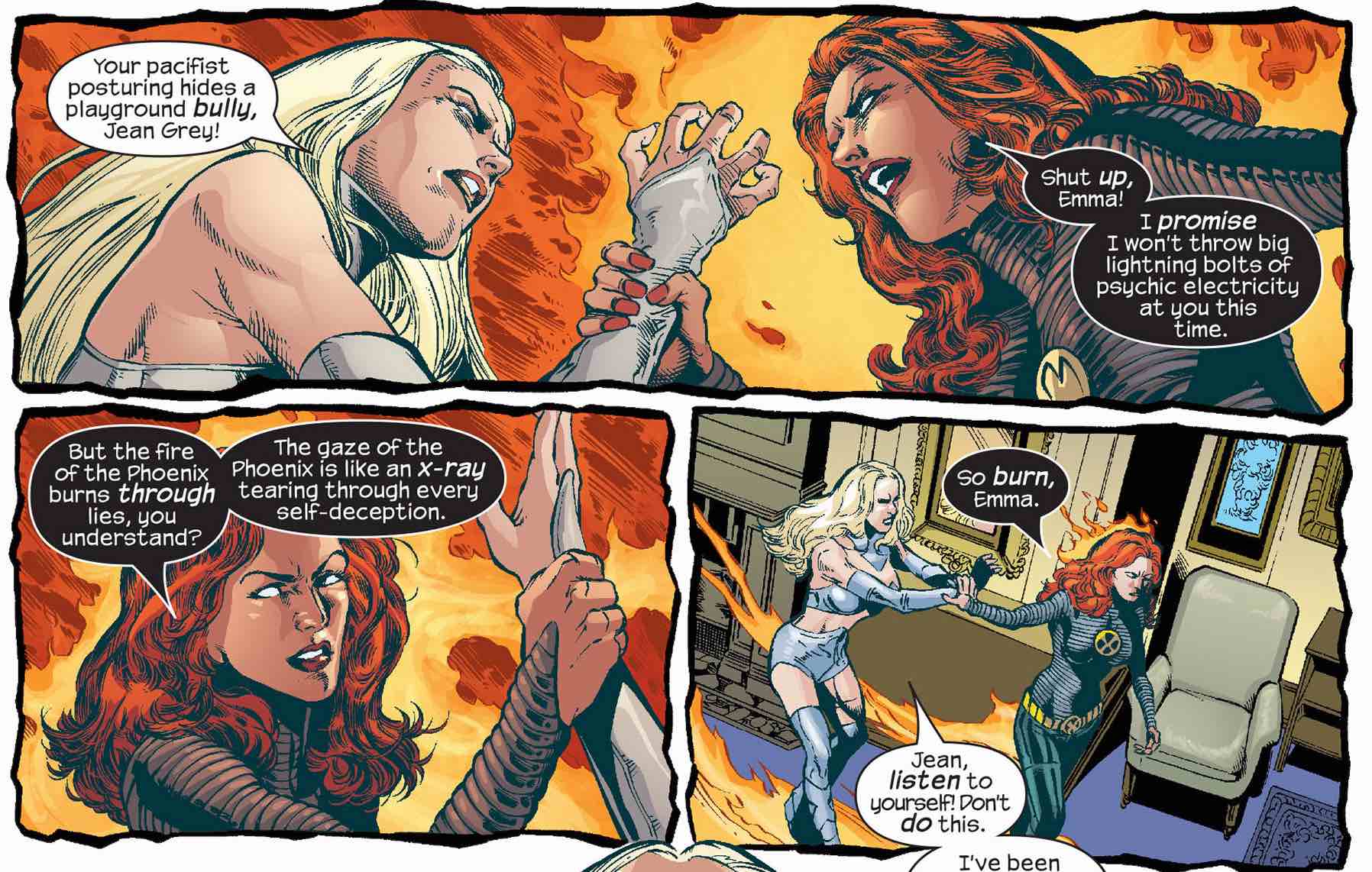 Healing Emma Frost of her Sublime infection and her depression, her post-trauma stresses, resurrected her from a pile of rubble, these are generous, kind acts that help a woman who has deeply hurt Jean Grey multiple times, but they are not without a bully side, as Frost rightly calls out. It is reasonable to suspect that Grey does more for Frost because she is someone who has hurt her.

Professor Charles Xavier cannot admit his faults. While he does not portray himself a saintly and some others will, Xavier has history in New X-Men and elsewhere of letting himself be sainted. 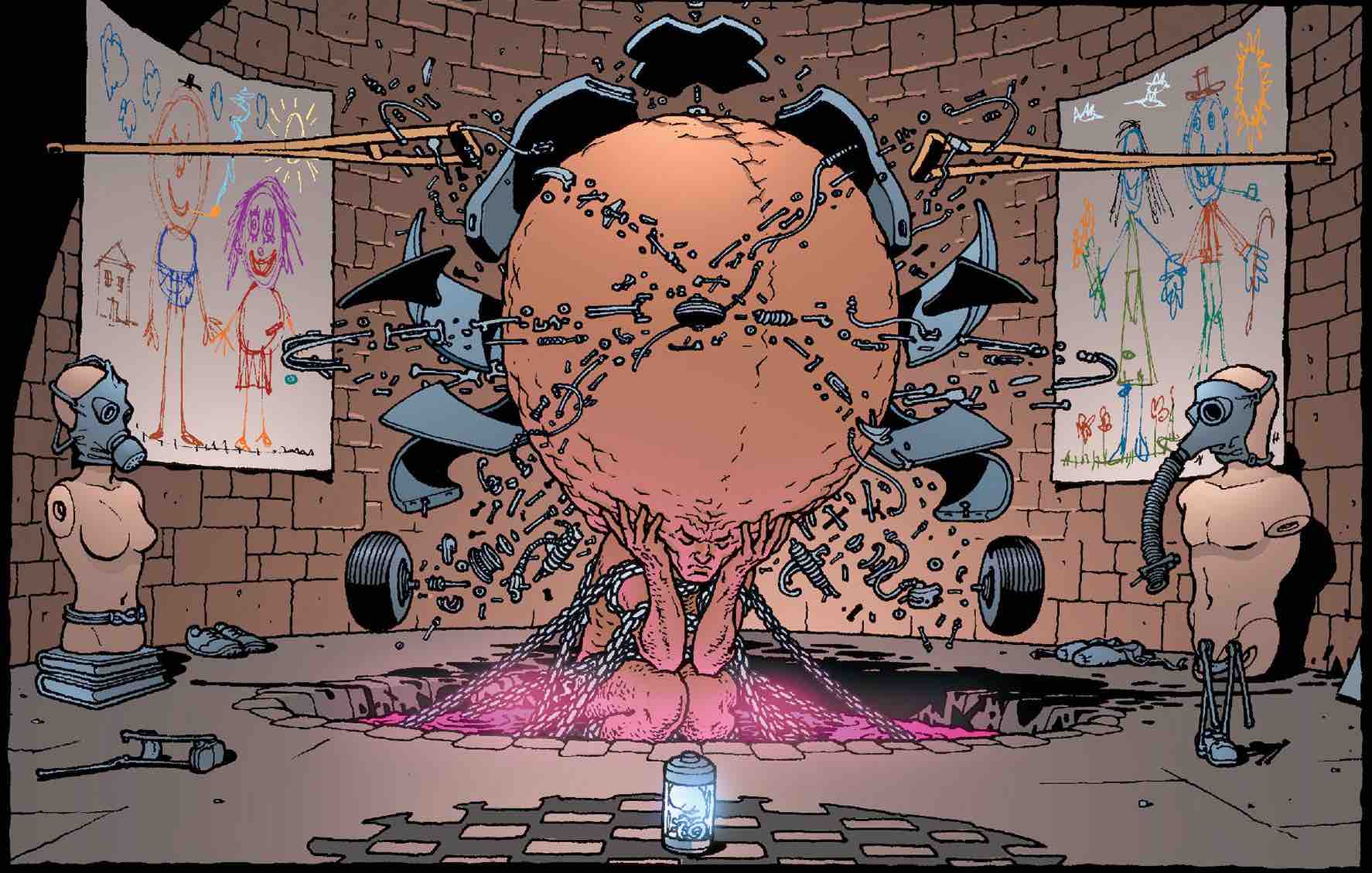 When Xavier steps down from running his school, the reasons he gives are not the reasons anyone is holding him accountable for, except for one disturbed teenager.

Perhaps relating to his history of hiding his mutancy from the world, Xavier often comes across as more of an ally than fellow.

Disengagement with mutant culture, mutant politics, entertainment, arts, and social standards has almost pointedly been as a mentor, an aide, an educator, framing – even in his own thoughts – his mutation as harmful, distracting, responsible for the early death of his mother, unleashing cosmic horrors, and perhaps even necessitating be the recurrent injuries that deprived him of use of his legs. 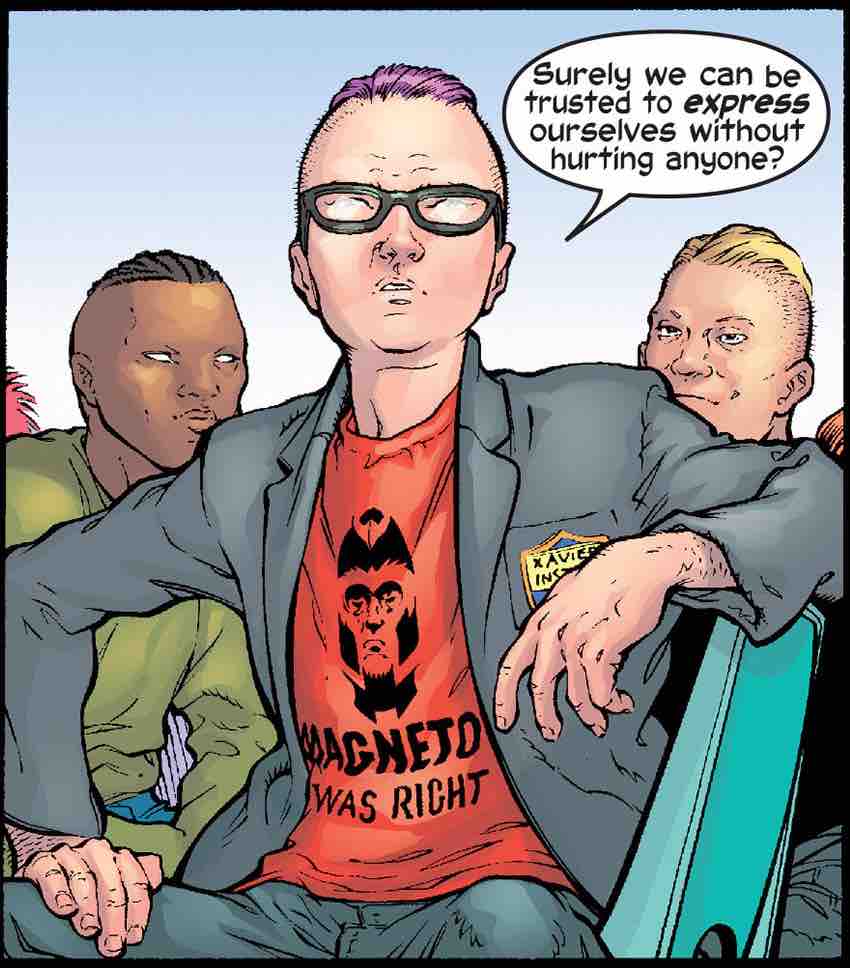 Obsessed unveiling the hypocrisies of everyone else, Quentin Quire I would sooner die than acknowledge his own hypocrisy. And, he does.

Quire, like the U-Men, is there expiration of certain fascistic, jealous geek culture tendencies. He is intelligent, quick, passionate and knowledgeable. He has an idiosyncratic fashion sense and political ideals. He is violent, sexist, condescending, and operates primarily bye reaction to perceived threats rooted in fear that everyone other than him is cooler than he is and that they are all in this cool together.

In Kid ?, Quire fumes over a popular schoolmate, Slick, because he is adored and appreciated, because he can play guitar and girls like him. Quire tells himself, and his best friend, that his anger is because Slick is not as genuine as Quentin Quire is, that what people see is not Slick, only how Slick presents himself.

And, so, over the course of the issue, Quire strips away Slick’s coiffured appearance, and steals his girlfriend with his super powers of persuasion.

Quire makes an attempt to justify these abuses, as well as to defend the riot he starts, jumping humans on the street, getting his friends arrested or setting them on fire, as necessary steps to show the world their hypocrisies, to get the girl and then get another girl, et cetera, that it is all a joke, that it is all a lesson, he is playing devil’s advocate, only imitating his heroes…

This continues until he comes face-to-face with one of his heroes, Magneto, and Magneto kills him.

Magneto is a hypocrite. But, which is the hypocrisy? Presenting himself as a meditative, compassionate, traumatized welcome home mentor? When he exaggerates his vileness to cartoon levels that are no less terrifying for their absurdity?

The ultra-villainy of Magneto in Planet X includes concentrating camp ovens, a Magneto charged by anger-inducing drugs lecturing thin air and bullying children. It feels caustic and absurd. Characters beg him to reconsider, or to calm himself.

The drive in other characters to see Magneto as complex and ultimately good, is a drive mirrored in us as the audience. We hope for Magneto.

Magneto, who will later star in a comic subtitled, Not a Hero. The Magneto who led a militia on missions of conquest, theft, and slavery, and called the militia, The Brotherhood of Evil Mutants. A Magneto who, in of living and dying and Losers, trolled the X-Men with malicious, faux simpering goodness.

This is try-hard evil. This so affected brutality.

But, so are his stabs at being not a villain. Magneto is not particularly patient or understanding, and when he feigns to be, it is with great effort and often a lot of bile built up behind it.

Our hypocrisy, our nerd hypocrisy.

Every X-fan on Twitter, calling other posters “flatscans”, is a U-Man. Every angry dude sure people are judging his favorite movies and shows, insisting he wants a better world for everyone but he will not stop saying racist things. The rhetoric of Chads and whatever the opposite of a Chad is.

The U-Men claim they simply want equal treatment, equal access. That they are a wave to the future. They love minorities. They love fairness.

They achieve that by dehumanizing others, by murder and butchery, cutting up mutants and implanting body parts inside themselves. 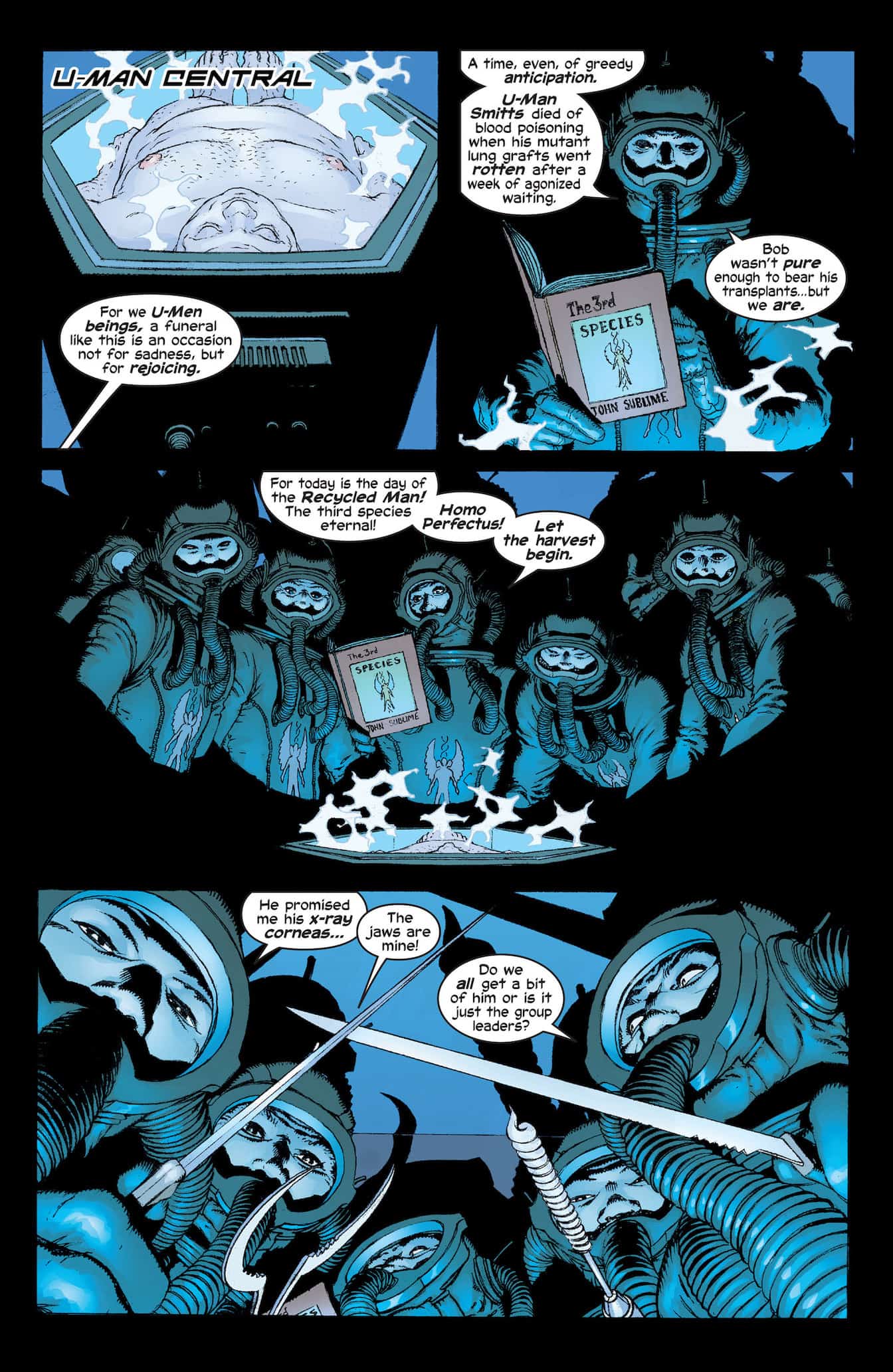 If characters are presented as having serial lives and not situational sketches, they need to show growth along with, at the very least, a generation of audience or contemporary mores. The old hypocrisies, in characters we are meant to admire or align with, have to sometime give way to momentary acknowledgment, or they and we grow ill. Don’t take antifreeze in your coffee.

I’m not certain some professionals in comics did not learn to be U-Men, while drawing the U-Men.

In comics, The Ultimates were booming as a grotesque right-leaning self-parody and even leftist comics, like The Authority, both a) used titles like, The Authority, b) indulged in racist, sexist, and received wisdom caricature as part of the gag, including unironically resurrecting yellow peril iconography, and c) channeled extreme violence through ideologically palatable lenses to audiences who might otherwise be vocally opposed to such bloodthirstiness.

Frequent X-writer, Scott Lobdell, would tell his story of white supremacists who saw themselves in the X-Men, in the persecution experienced by mutants.

It is virtually impossible, today, to have a public discussion about the X-Men on social media, today, without someone chiming in that the mutants are superior, that all supremacy or eugenics may not be bad. Give it time, this will be joined by comments on geek superiority, on geek culture being superior and a guiding light.