Alice in Leatherland (Black Mask Studios, 2021) is a sex comedy title created by Italian comic creators and real-life couple Iolanda Zanfardino (Midnight Radio) and Elisa Romboli, both with other creative works at Image Comics and Titan Comics. Alice explores sexuality, sapphic dating, chosen family, relationships’ ups-and-downs and more through a main character who is herself creating a fairy tale that sprouts from the pages. Our own journalist Duna had the luck of asking both Iolanda and Elisa about the emotional nooks and crannies of the book, whose last issue (for now) releases this upcoming August 18th. Here’s the result! 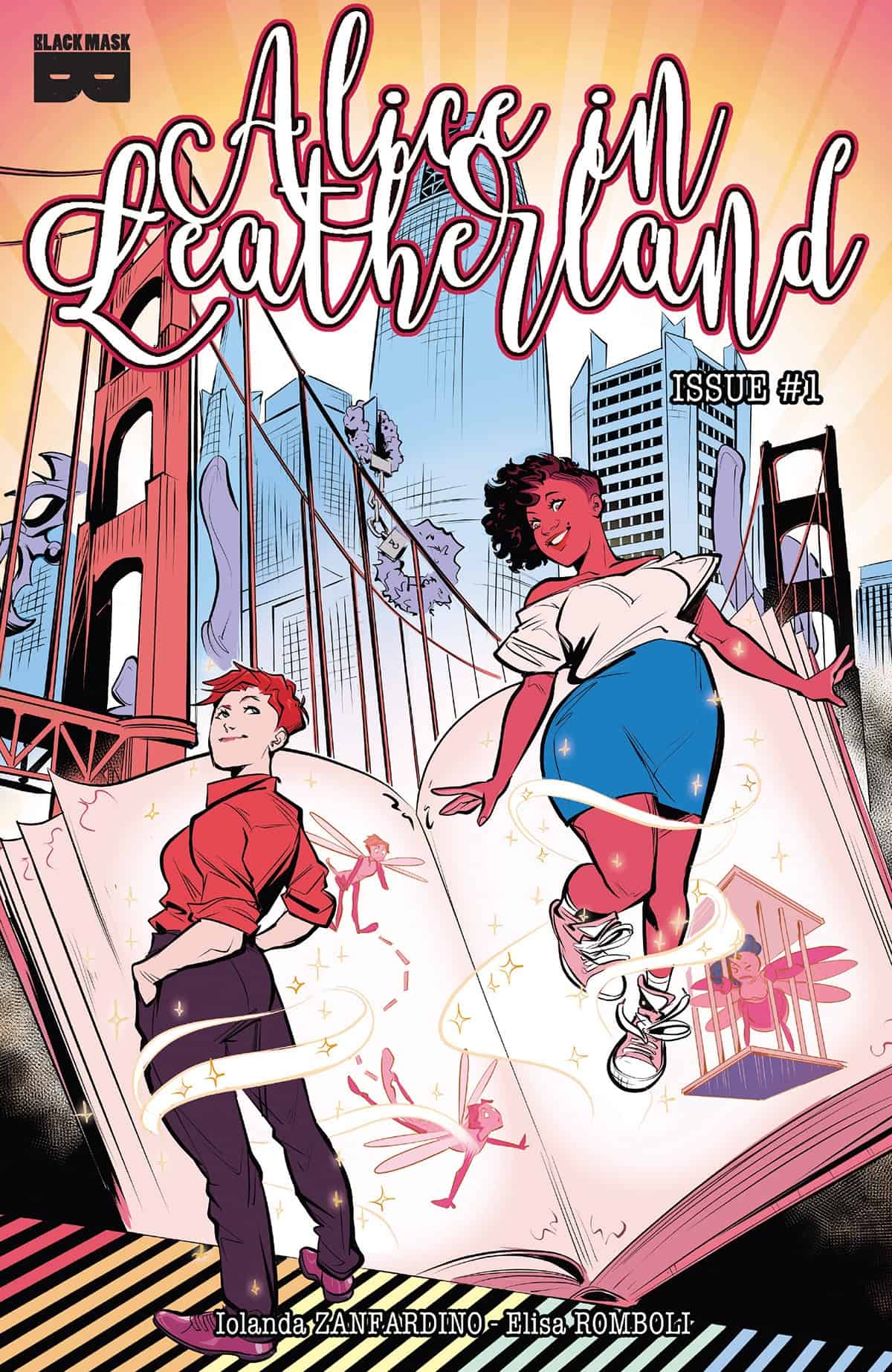 Comic Watch: Hi Iolanda, Elisa! Thank you so much for chatting with us at Comic Watch! The first thing I want to ask you both is, what audience do you have in mind for Alice in Leatherland, and how do you want it to affect others?

Both: Hi Comic Watch! Thank you so much for this exciting opportunity and for letting us talk about our Alice!

The audience we had in mind was certainly the fans of romantic comedies, people loving stories of self-discovery and of unlikely but true friendships, but also anyone who has ever found themselves starting their life from scratch and being outside their comfort zone! And, of course, the LGBTQ + community!

The effect we were hoping for was to make them smile for a few minutes while reading Alice’s comic misadventures, and perhaps to make someone feel less alone.

CW: I know that this story, for me and other queer women, is arriving deeply in our hearts. A big part of it is that the intimacy of the characters feels drawn out of real life, but without sacrificing a constant sense of playfulness and quirkiness. How do you both navigate telling, especially visually, a story that feels so truthful at times and so exaggeratedly fun at others?

Iolanda Zanfardino:  This story was written with naturalness, often taking inspiration from real life situations. I think that’s the way I myself see the world in general: when things get too complicated or heavy they often go straight to the “tragicomic” version of themselves in my head!

They become “absurd anecdotes” to tell other people about and make them laugh!

Elisa Romboli: I often find myself hearing all these enthusiastic anecdotes from her, and in my head they translate into vivid images! Also, thanks to a strong manga influence in my artistic past, it often comes naturally to me to draw exaggerated expressions that I find very functional to comic scenes.

CW: The setting of the fairytale Alice is writing superimposed to a real-life story of sexual and romantic exploration carries the book. Why did you both choose specifically Alice in Wonderland as its blueprint? Are there other fairytales you drew from?

Both: To say the truth, our concept for the book was to create a paradox between the fairy tale theme and the sex-positivity in the story, so at the beginning we had only scattered the story of small Easter eggs, like giving names of famous fairy tale protagonists to the various characters and “objects”! Our Alice had found herself with that name due to her looking so out of place in the lively queer scene of San Francisco. As a result we came up with the idea for the title, but apart from that there is nothing else that refers to Lewis Carroll’s book.

Both: We believe that there is nothing contrasting between Alice’s exploring her own sexuality and her work as a writer of children’s fairy tales. They are two different spheres / areas of her life and both of these are very important to her. 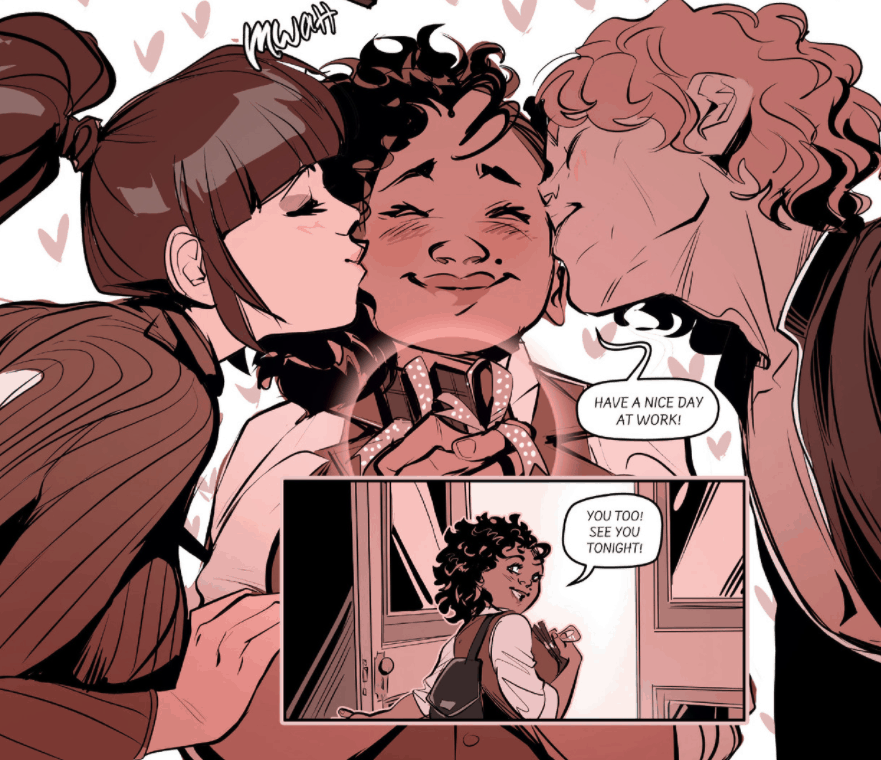 CW: A big part of Robin’s story (and it’s implied that of other characters like Joaquín or Kaguya) is non-monogamous or polyamorous relationships, even if in Robin’s case is a very messy version of it (that can still be very true for some people). Do you have any referents on those portrayals?

Both: We personally are monogamous, but there are many people dear to us who practice other relationship dynamics.

We tried to show various relationship choices in the story: Hansel, for example, is married and enthusiastic about his little girl. Joaquín is a sex worker but when it comes to romantic relationships he is monogamous. Kaguya is happily non-monogamous and aromantic and her relationship orientation comes to her as much more natural and self-aware than Robin’s.

Robin in fact imposes herself strict rules that are too tight for herself, because she is unable to admit her feelings for Alice. Both because these feelings were born while Alice was in a long stable relationship, and because even now that Alice is single she seems to be looking for very clear and intense things that scare Robin at this moment.

CW: A thing I also liked a lot about the book, and especially on Alice’s side, is the different dates she goes through, which can represent a lot of the merits and pitfalls of sapphic dating apps. I’m super curious about how brainstorming for these stories was.

Both: I believe many of us have tragic experiences to tell about sapphic dating apps! (hahaha) In addition to our personal stories we also asked other friends to help us look for examples of bad encounters and various clichés! From the readers’ reactions, it seems that these are sadly common situations! 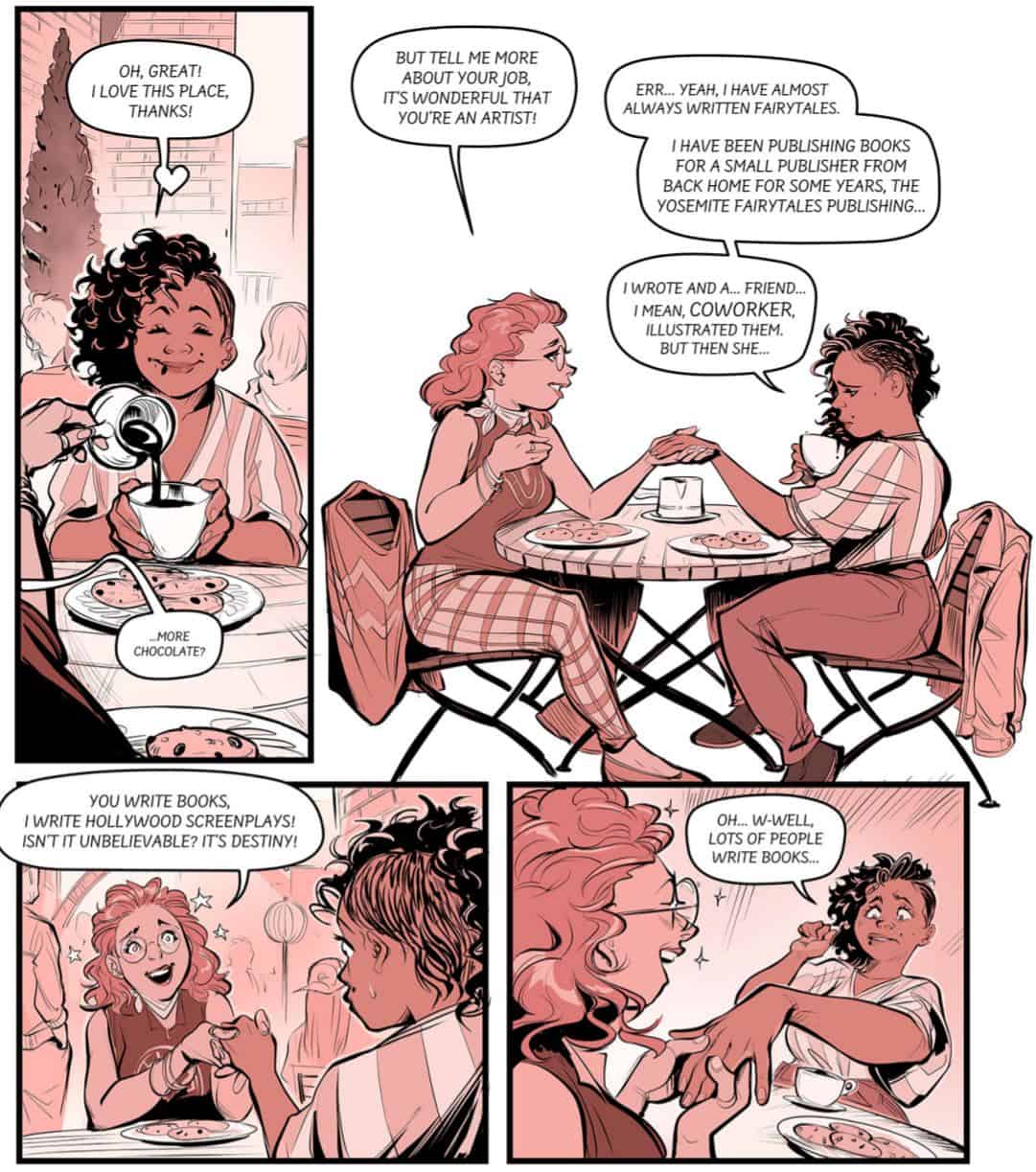 CW: In issue #2, there’s a beautifully drawn San Francisco Pride march, and I’m kind of interested in the intention of this series moving forward in LGBTQ+ representation, as it’s one of the titles on the shelves right now that I feel more explicitly has said ‘we’re gonna take a peak at a lot of different aspects of the queer community’, and, that fills me with joy! I’m also especially interested in if we’re gonna see more of the T, Q or ‘+’ part of it. Or if that’s something you’re interested in putting into this or future stories.

In Alice in Leatherland, Peter is a trans character, but I think it’s intuitable only through a speech he does to Alice (he’s a man and so just behaves like a male character, after all).

We wished we had more space to talk about secondary characters, like him, Joaquín and Kaguya, to show more of the “+” and its nuances! We hope to be able to do so in a possible sequel!

IZ: In my first graphic novel, Midnight Radio, I was able to give a little more space to a transgender character. But the theme will be quite central in my next 5-issues miniseries, unfortunately not yet announced, for Black Mask Studios! Stay attentive to that!

CW: Lastly, and talking about future stories, I would love to know what each of you has in their hands right now, what you’re working on. And if you can tell us a bit about A Thing Called Truth, your new miniseries out this November at Image comics.

Both: Apart from Iolanda’s miniseries that we just mentioned, we are focusing on A Thing Called Truth! We are very excited for it!

For now we can only say that it will be a queer romantic-adventurous road-trip story! We will talk about very important topics for us, such as searching for a middle ground between devoting yourself body and soul to a goal and enjoying every moment with no regrets. And of the dream of leaving your mark on the world. 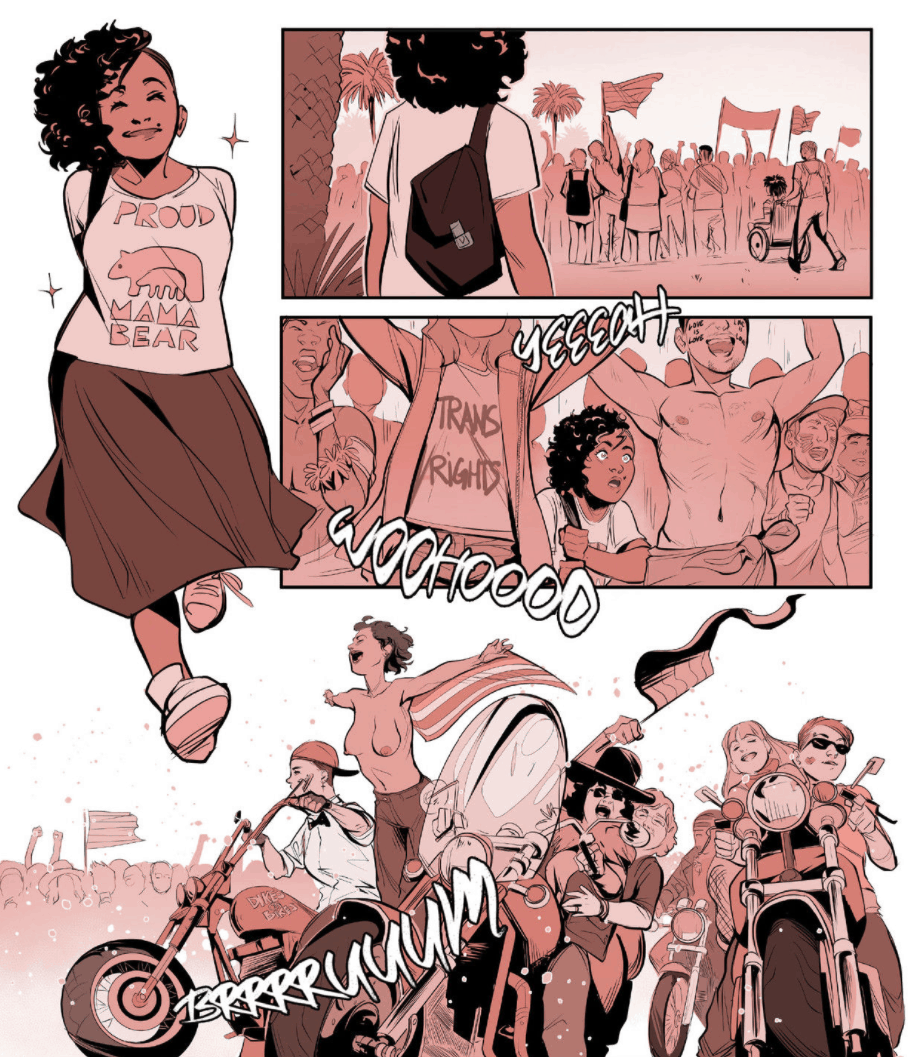 Follow Iolanda and Elisa and get Alice in Leatherland #1 to 4 now at Black Mask Studios, with issue 5 coming out later this August, as well as A Thing Called Truth at Image Comics this November!