BOOM! Studios have announced HEX VET: THE FLYING SURGERY, the next softcover original graphic novel about witches-in-training Nan and Clarion, from cartoonist Sam Davies (Stutterhug), which will debut in stores December 2019. 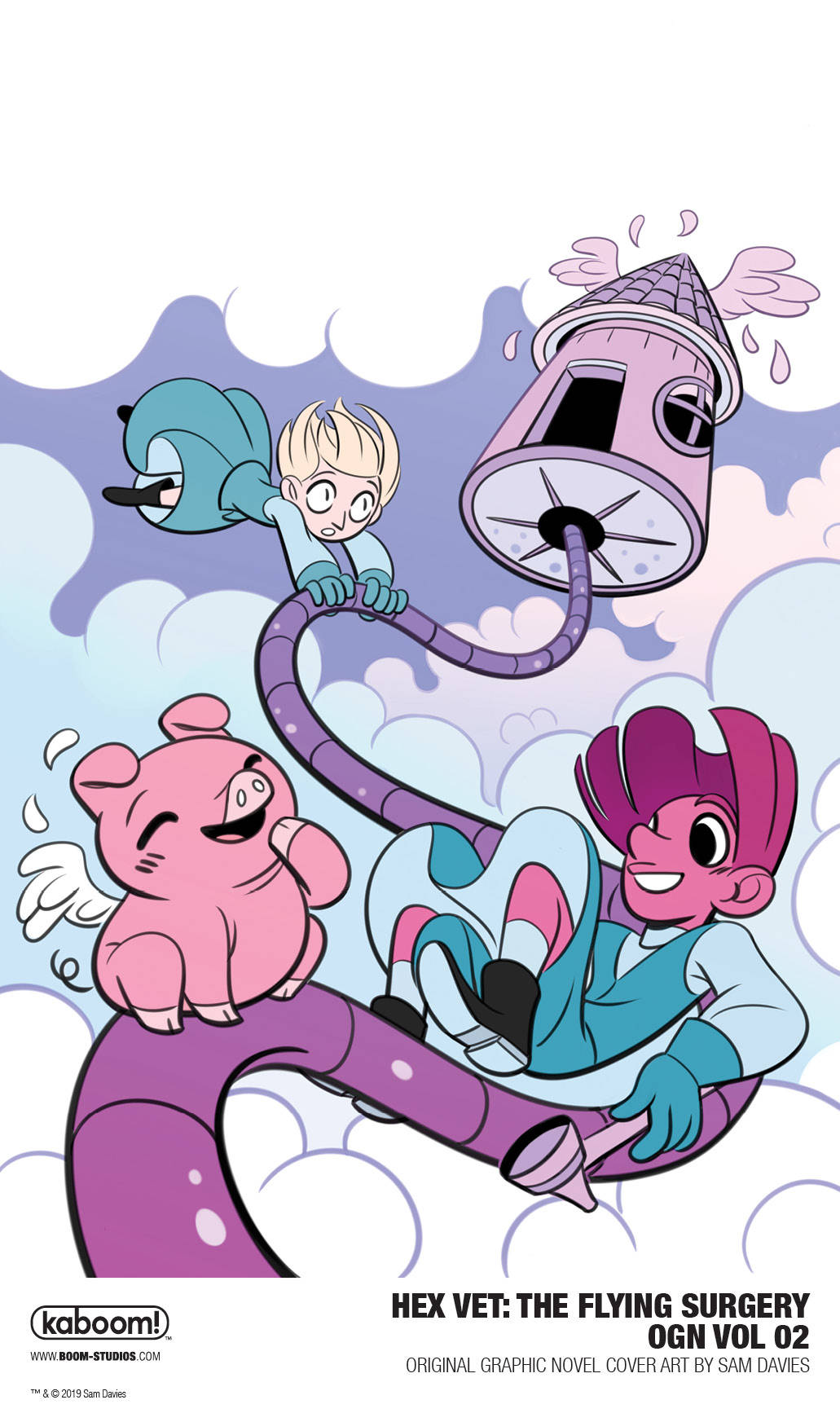 It’s time for the monthly “Winged Creature Clinic” at Willows Whisper Veterinary Practice, where flying creatures from all over come to get treated. But when Glenn the Wildlife Warlock brings in an injured flying pig that looks like it may have been mistreated, panic strikes and a greater mystery unfolds.

It’s up to everyone’s favorite witches-in-training, Nan and Clarion, to keep everything under control at the chaotic clinic while Dr. Talon is away. Will Nan and Clarion save the day and keep their jobs? Or are their days at Willows Whisper numbered?

“For this book, I wanted to expand on some of the more fun elements having a magical vets surgery could include. . . like literally launching a bit of it into the sky if you need to!” said Sam Davies. “I hope it will make the world feel bigger and more exciting for readers who enjoyed the first book and wanted to know more. There’s a lot Nan and Clarion have to deal with on top of learning to care for their patients this time around. Let’s hope they can rise to the challenge!”

Sam Davies is the creator of the beloved silent webcomics Stutterhug and The Shape of Things, as well as original graphic novel Hex Vet: Witches in Training from BOOM! Studios.

“These lovely little hex vets are the best, and now they’re taking their wild and charming antics up into the clouds. How much fun is The Flying Surgery going to be? I’d say the sky’s the limit,” said Bryce Carlson, Vice President, Editorial & Creative Strategy, BOOM! Studios. “Sam continues to be nothing short of brilliant. Her cartooning and storytelling are perfect for readers of all ages and we’re incredibly grateful that Sam is continuing to explore this world. Not only do we get more Nan and Clarion shenanigans, but this next installment of Hex Vet is also filled with more magical creatures, new endearing characters, and the continued admirable mission of doing whatever it take to help save animals.”

HEX VET: THE FLYING SURGERY is the latest release from BOOM! Studios’ award-winning KaBOOM! imprint, home to comics for middle grade and younger readers including licensed series such as Adventure Time, Steven Universe, Regular Show, Ben 10, and Over The Garden Wall, along with original series like Pandora’s Legacy by Kara Leopard, Kelly & Nichole Matthews, RuinWorld by Derek Laufman, and The Deep by Tom Taylor and James Brouwer.

Print copies of HEX VET: THE FLYING SURGERY will be available for sale in December 2019 at local comic book shops (use comicshoplocator.com to find the nearest one), bookstores or at the BOOM! Studios webstore. Digital copies can be purchased from content providers, including comiXology, iBooks, Google Play, and the BOOM! Studios app.