FIRST WATCH: YOU are DEADPOOL…Choose Your Path! 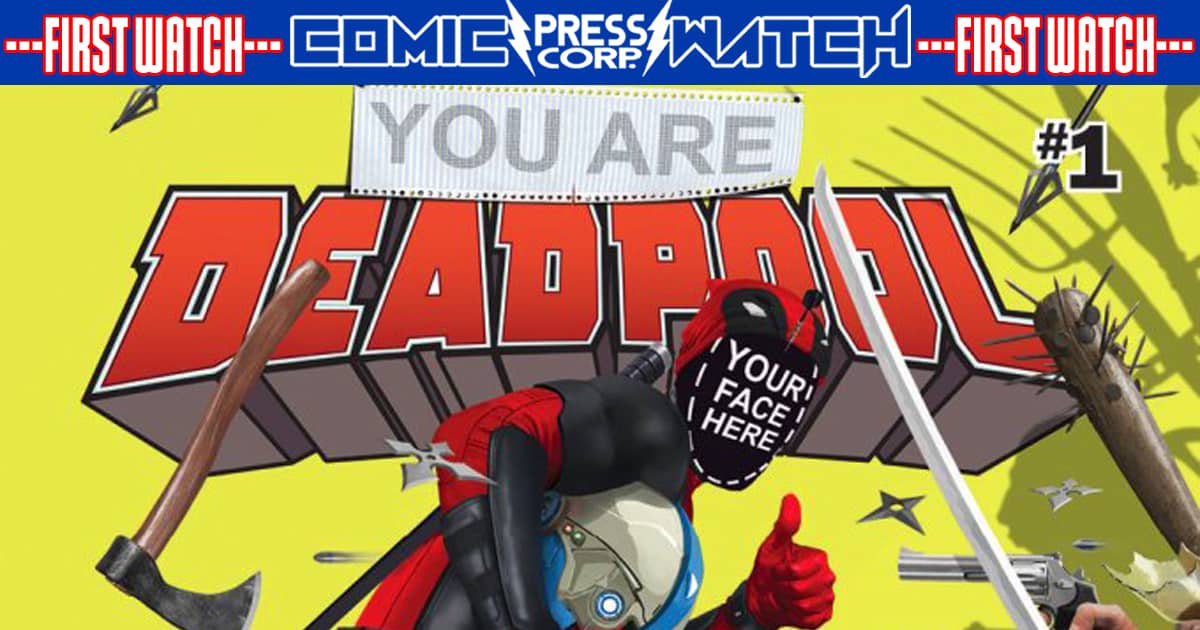 The fourth wall has been broken – by you, because this May, YOU can be Deadpool! The merc with the mouth is your guide as he takes you on a fantastic ride that doubles as a role playing adventure in this new five-part weekly miniseries where adventure…danger…and the future…all rests in YOUR hands!

Written by Al Ewing (Avengers: No Surrender) with art by Salva Espin (Deadpool) and Paco Diaz (Avengers: No Surrender), YOU ARE DEADPOOL is an interactive narrative that lets readers control Deadpool’s story by rolling dice, keeping track of their scores, and making smart (or disastrous) decisions.  And be prepared to meet some classic and unique guest stars as you travel through time as Deadpool in a whirlwind adventure! 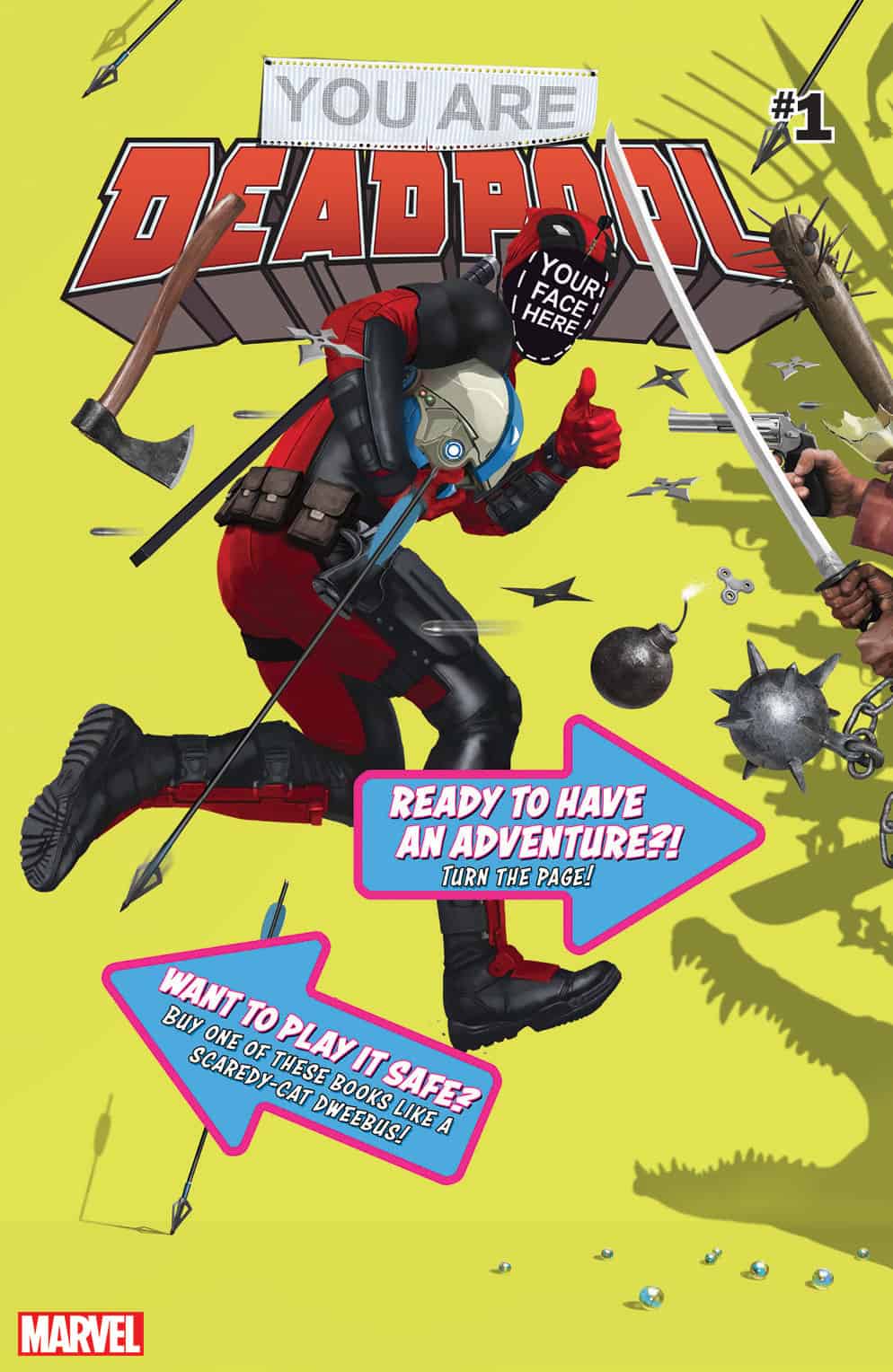 “YOU ARE DEADPOOL is a five-part adventure gamebook in the classic tradition of FIGHTING FANTASY, LONE WOLF and DICEMAN — where YOU, and the cut-out-and-keep DEADPOOL DIE, control the action! Every week brings a COMPLETE single-player adventure — where you encounter glamorous guest-stars like HULK, GHOST RIDER, GRASSHOPPER, DAREDEVIL and ANOTHER GRASSHOPPER — that form an EPIC QUEST the like of which you’ve NEVER SEEN unless you have!” teases series writer Al Ewing. “And there’s more! Fight END-OF-LEVEL BOSSES! Manage your inventory by STEALING background objects! Explore FIVE DIFFERENT TIME ZONES in NEARLY ANY ORDER! Play the TUTORIAL LEVEL! Enjoy UNIQUE MINIGAMES about BAR FIGHTS, BEAT POETRY and SNEAKING THROUGH LEVELS! LAUGH! CRY! CHEAT! It’s all waiting for YOU — because YOU ARE DEADPOOL!” 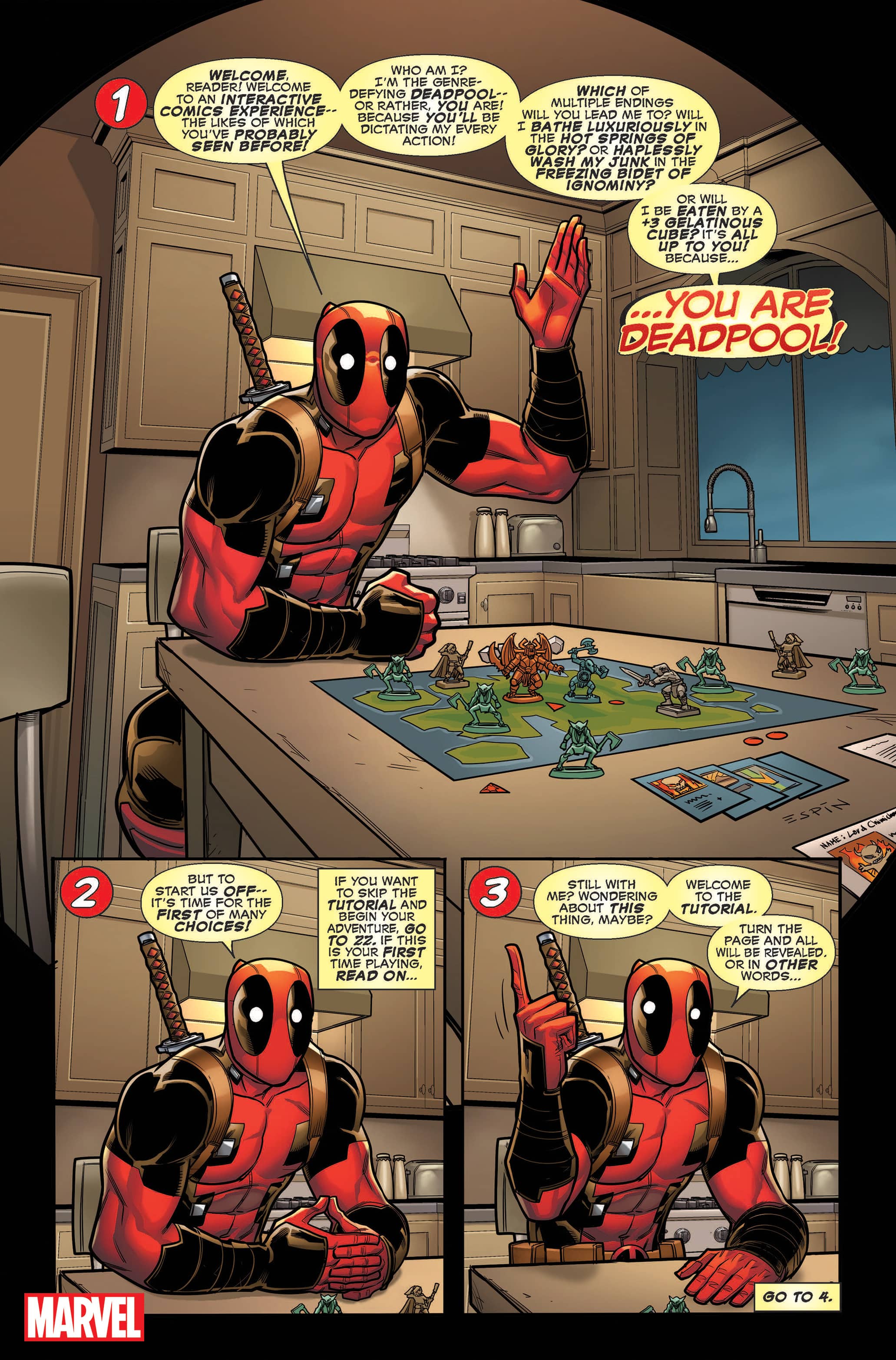 It’s a series, unlike anything Marvel Comics has ever done – new and seasoned readers alike will get their chance to play this May when YOU ARE DEADPOOL hits your local comic shop! 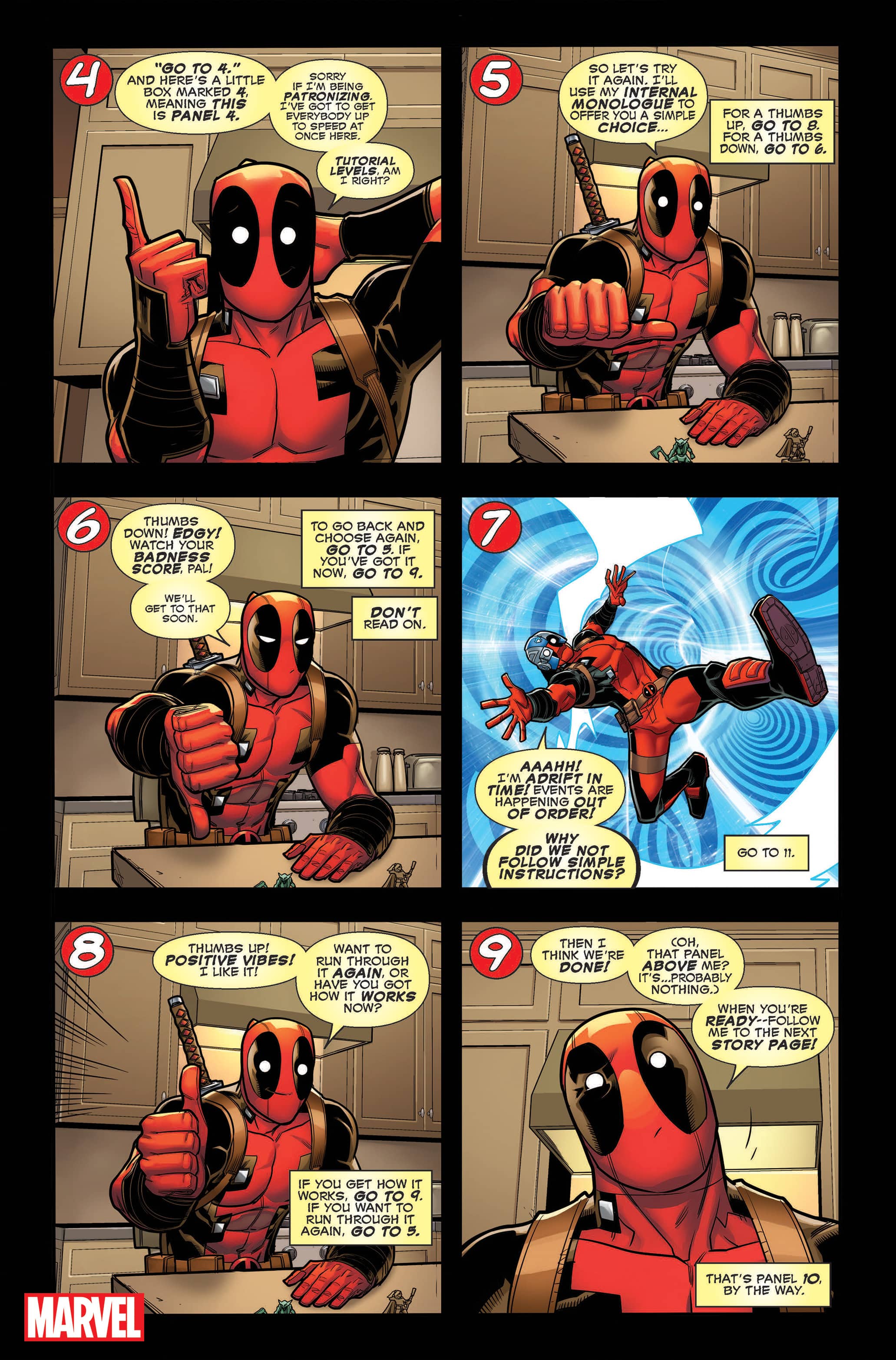 You’re in control…someone’s got to be! 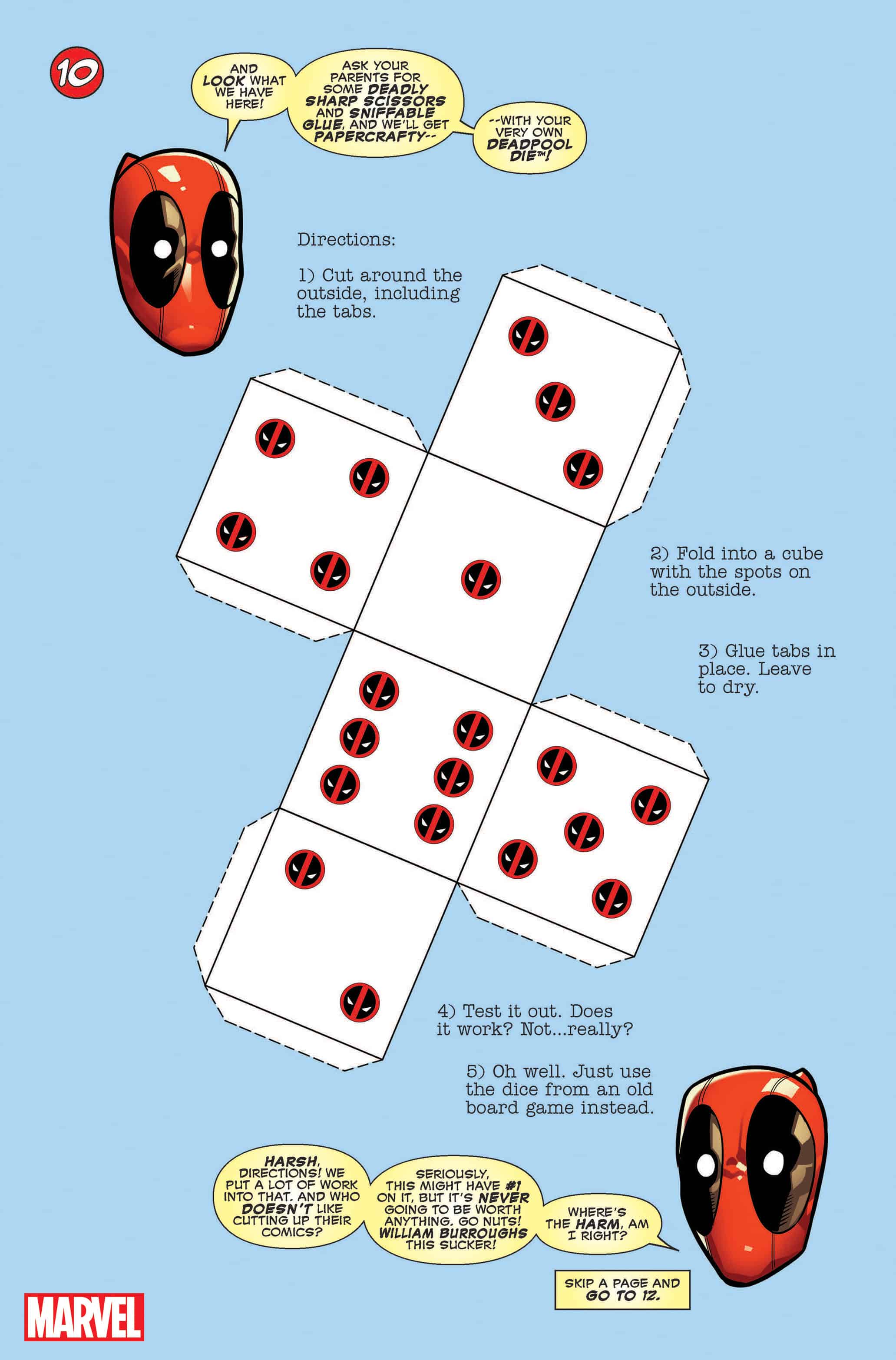 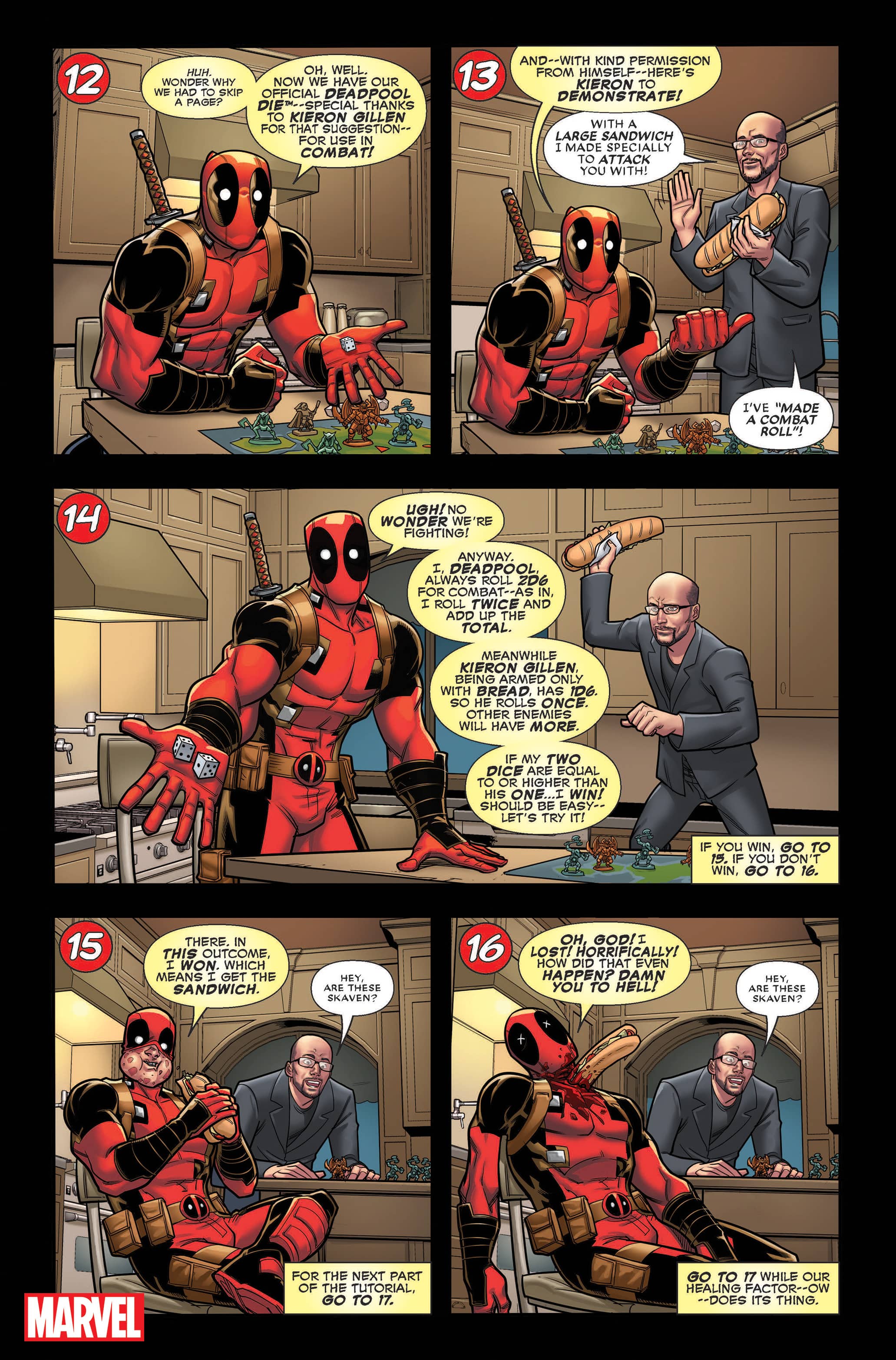