“I believe that to read Devil Dinosaur is more than experience in story-form. It’s a road to meaningful thought.” – Dinosaurs as Devils and Moon-Boys as PRIMITIVES, Jack Kirby 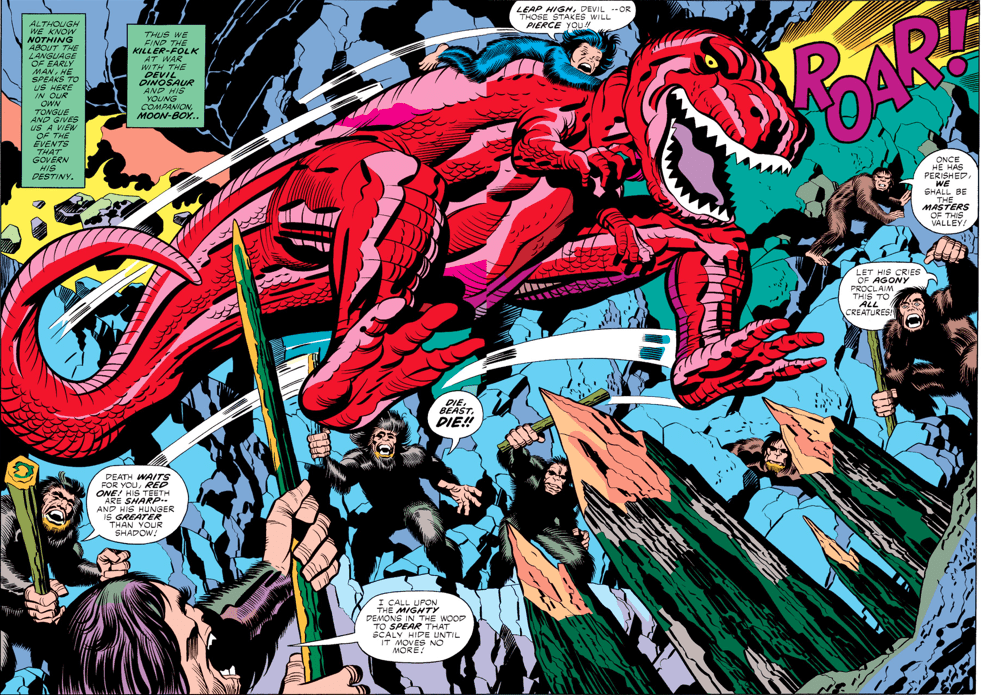 Not to say that other versions are not fantastic, as some are, but no one has done Devil Dinosaur, the mode of operation, since Jack Kirby’s Devil Dinosaur. Every other version has been a boy and his pet, or a girl and her pet, a villainous dinosaur and his now-dead annoyance, et cetera. The why is easy: Doing Devil Dinosaur and Moon-Boy the original way, is hard. And, it was hard for audiences to take, presumably, as the title was canceled in less than a year.

Smart, compassionate comics, Devil Dinosaur is Kirby at the top of his game, visually, politically, and aesthetically, combining his love for the underdog, poking at our tendency to judge on sight, the mishmash of history he saw becoming the pastiche hauntology future before most folks did, aliens, the origin of humanity, the heart and roots of decency, generational turmoil, and the bursting energy of seeking and finding comfort.

Devil is not Godzilla, or the t-rex from a Jurassic Park movie, a demon or the shark of Jaws. Devil is Batman, and Moon-Boy is his Robin. They are superheroes, using amazing abilities and a sense of justice that supersedes social expectations to save people and combat crime. And, like Batman, Devil is scary-looking and a rough customer. His, “young dawn-companion,” Moon-Boy looks tiny beside him, more agile, sillier, but just as potent.

Their (often unappreciated) heroism was very much the driving aspect of their early appearances, and the thing that goes most ignored in any version past the original series. Devil Dinosaur was a superhero comic, as sure as any, that never readily appears as one, as the markers that make it one are used without copying tropes and stylistic flourishes wholesale and cheaper. Work went into Devil Dinosaur, every issue, and thought.

For Jack Kirby, the comic seems to have been a playground where all history and all story was open for business. What Kirby call the X-Age or X-Period in his essay, The X-Age…..A Comic Book Bonanza, is a proposed post-modern age of all ages, or era made of shifting splinters of the totality of history and future, as well as fictional history and future. A catalogue or parade of elements. “The period, itself,” Kirby says, “remains an enticing mystery, a ‘grab bag’ for storytellers and their constituents.” He goes on to say, “We’ll undoubtedly explore the past with Greek and Roman superheroes when the more ancient ones have had their turn. The history we know will be colored by the atmosphere of fantasy the comic reader has come to accept. The galleys of Rome will sail into the Bermuda Triangle and emerge to assault Miami. The heroes of the Trojan wars will rub elbows with ‘Time Warp’ Astronauts.” 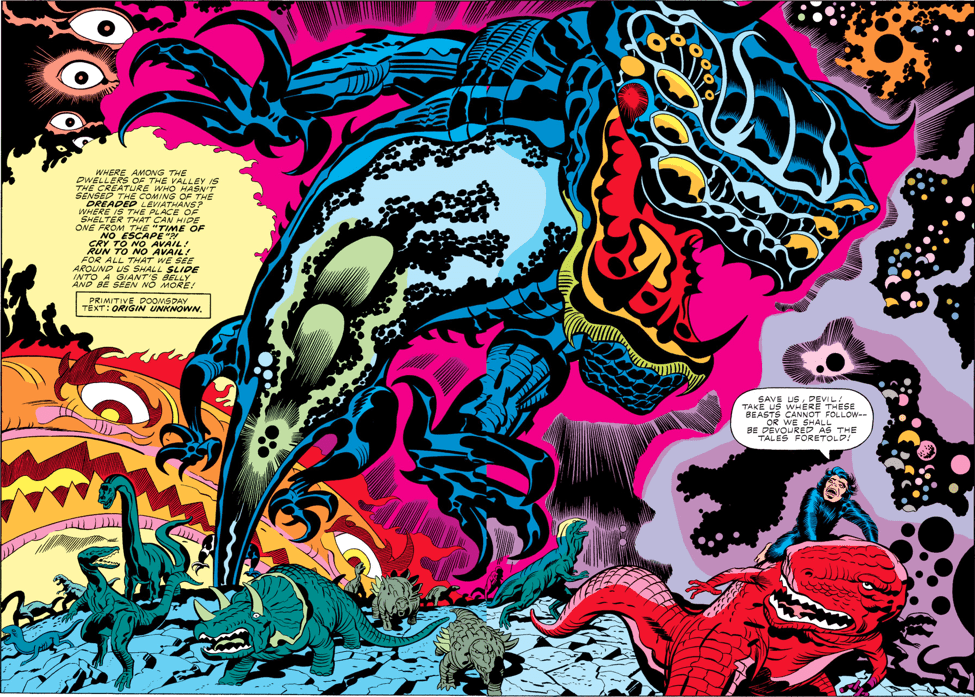 The League of Extraordinary Gentlemen, Swords of Sorrow, movies such as, A Knight’s Tale, Ever After, and Night at the Museum, retelling fairytales and mashing up history and fictional history into a miasma of presence/today, have their roots in Angela Carter’s 1979 collection, The Bloody Chamber, in traditional ahistorical adventures, especially in comics, the pirate drama of Captain Fear or the anachronistic Dr Doom and Diablo of Kirby and Stan Lee’s Fantastic Four, but it is most vigorously concretized in comics by Jack Kirby’s Devil Dinosaur, and his backmatter essays demonstrate how conscious and engineered this concretization was.

In, There Were Giants in Those Days!, Kirby elaborates, “[T]he seeds of Homer and Jules Verne are widely scattered. We could grow a tree here, more fascinating in detail than previously illustrated in mythology and science fiction.” He invites his immediate audience’s participation, but the words and invocation carry over to us and to generations beyond us: “[I]t’s your play and your suggestions which can add new dimensions to an already intriguing premise.” 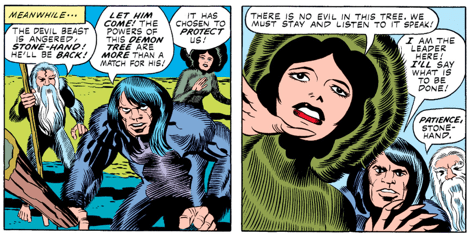 Jack Kirby’s telling of the Genesis myth in Devil Dinosaur, the Eve and Adam fairytale as one of ego, sexism, rape or rape-threat, and historic revisionism is enthralling, and has aged into something stronger than most attempts to turn a specifically feminist expression in a superhero comic of the same era, particularly those exclusively or even mostly by male hands, male minds. Stone-Hand, our Adam, will not fathom that Eev is not his inferior, or that injury to himself could come from his own actions, and not guile of others or nature itself set against him maliciously. It is his story that will carry on, over the generations and millennia, or an echo of it created by a future generation, because ultimately, unfortunately, as people, we do not change overmuch. 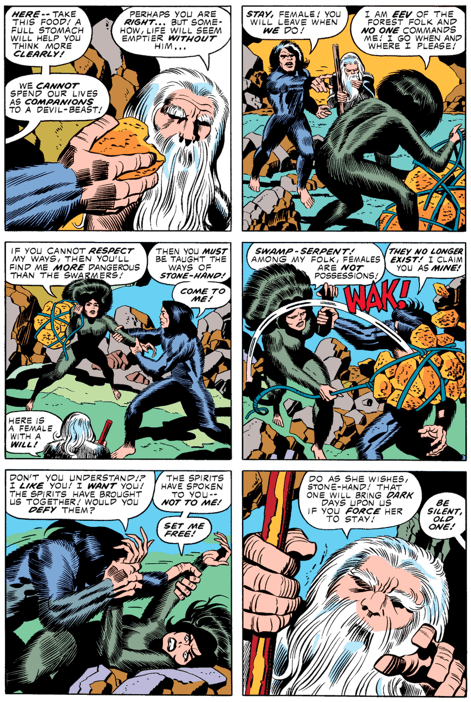 Kirby’s humans in the modern era, during the time Devil and his young friend travel forward to our times, react essentially as the people of his age respond, both to them, and to all things.

“It is we,” says Kirby (Dinosaurs as Devils and Moon-Boys as PRIMITIVES, again), “who have made the dinosaur a devil and early Man a PRIMITIVE version of ourselves. It is we, who listen to the tales of witch-doctors, old and new, for the surges of adrenalin so necessary to our existence. In my opinion, it’s time to put a halt to this type of practice. Fear, of course, breeds hatred, and I dread to think of what would happen should a living dinosaur be found in the Amazonian jungle or a Big Foot wander unwittingly into a super-market in northern California.”