Luda got me from the first words. I was being fussy with it. I knew I would read it, but would I read it first day of release? I had been turned down for a review copy. Sniff. Deep breath. Square the shoulders and soldier forth. I let myself be huffy over that because it really did not mean anything. When my feelings are really hurt, I try to not let it show, but there is a charm and humor in being told, No, you cannot have a review copy of a book, because much of the time, they will give one to anyone who asks.

This was the perfect mood, the pluperfect mix of affectation and diminished interest, because the charm and lure of the novel raked me like dry leaves off the ground and into a heap. Then, on me, it heaped some more. 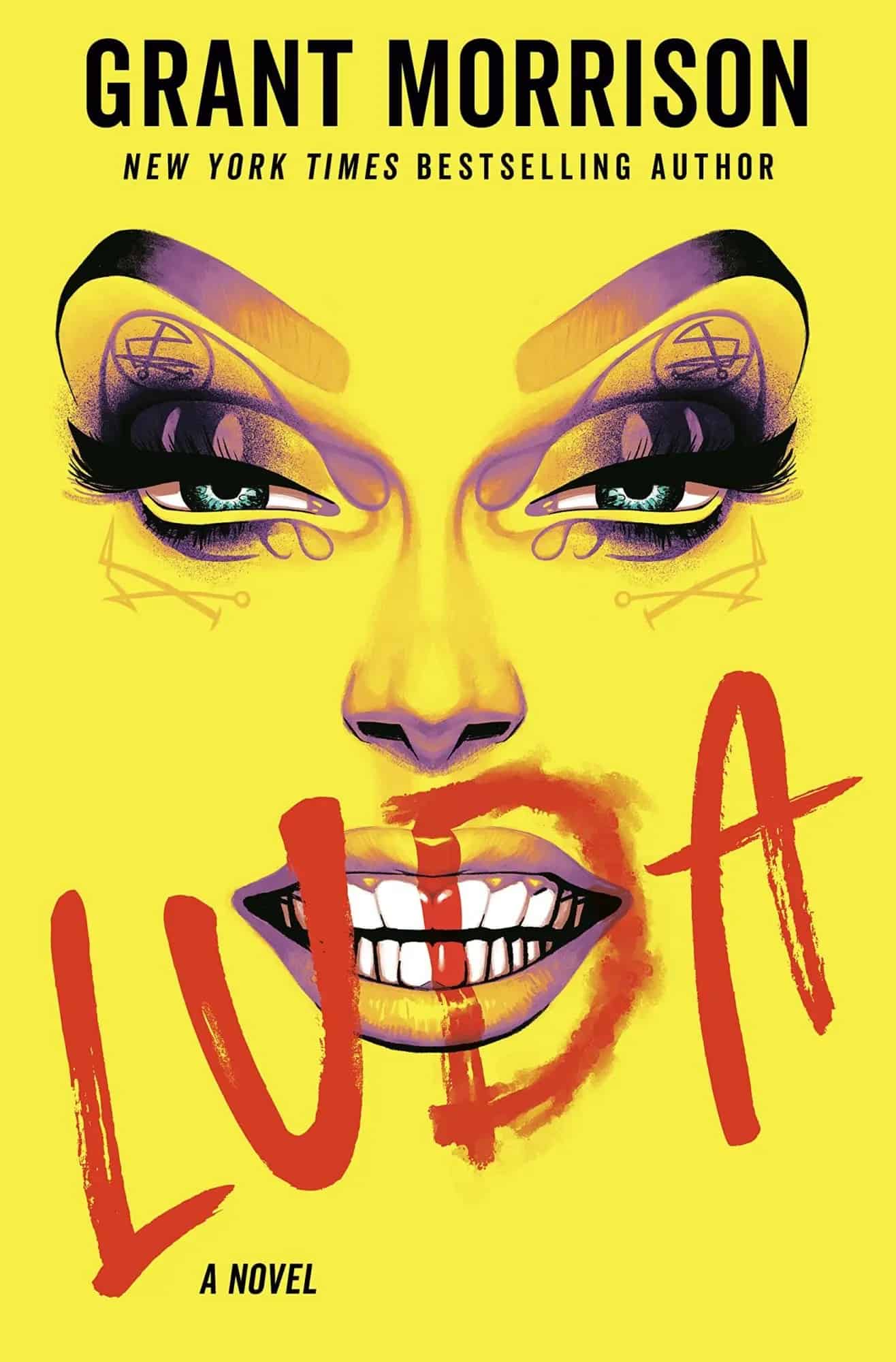 The story of an aging drag queen and her mentee, the tale of Nimue and Merlin, an ideography in words, an ideograph of prose, Luda is the first published novel of Grant Morrison, more known for their extensive body of comics, and late of television writing as well. Having come out of late, more publicly, as nonbinary, there has been a wave of reconsideration to much of their earlier work, decades of comics, plays, short stories, reviews, essays, and the occasional visual art or song in that refreshed queer light.

The easily armchair analysis of “written on drugs” has given way to, “written while queer.”

Luda allows for an easy, armchair analysis. It is a quick read, it is a vibrantly eloquent, charming novel whose expansive vocabulary and expressive prose is not limited by any attempt to overwhelm or outthink the reader. But, it allows this easy analysis maybe to leave that reader to the side while others dig deeper or bounce refracted between mirror pane and mirror pain at truncheon angles and by truant envy, to a prismatic and mimetic distortion just as in the novel, our city of Glasgow is expanded and revised into Gasglow and into a truer, dogmatically policed Gasglow lain over the first.

Playing mirror games with mirror motifs, Luda floats notions and anecdotes close to the myth and biography of the author, mutes and circumvents and alludes to suppositions made before the novel was released to readers. Who is this a stand in for? What is this standing for? What forging dinging meaning?

Building on ideas and techniques seen in Morrison comics such as Zatanna (with Ryan Sook & Mick Gray), The Invisibles (Thompson, Jimenez, Vozzo, et al), and Vimanarama (with Philip Bond & Brian Miller), Luda is never a retread of previous work and speaks to its audience on its own terms. There is no detectable attempt to rope their comics audience into following to a novel at the cost of any novel-reading audience coming freshly to this tome. Or, any television audience, or someone who saw Morrison on a talk show, or at a convention or speaking engagement, et cetera.

Luda thrives on its own terms and the terms are showmanship! This is show! This is the business called show.

Characters direct and reflect another, genuflect and correct for others, bisect, sex, and flex one another. They refract and act their parts and the parts called show of others.

Reminding me of the careful, queer, and powerful truncated autobiography of Alan Napier, Not Just Batman’s Butler, Luda makes all efforts to reel us in, to lure is, to shower us in allure and pleas and peace and pace and thrills and lace and girls and grace and giddiness and goodness and goodness gracious gall and gallstones.

It is a wonderful, galling novel in the vein of Nabokov’s Lolita and Welsh’s Trainspotting, letting us be talked around past our safeties, past our checkpoints and precautions. Luda plays with our trusts and our memories, our banks of being and our frank sense of being, to allude and delude in perfect camp low theatre style. Any time someone sits center stage under a light and says, “Let me tell you a story…”