Goblin Lesbians In The Desert, Babe! – An Interview With Ruby May Valentine

Ruby May Valentine is a Jewish butch lesbian comic book artist, creator of the fantasy punk comic Goblin Valley, as well as musician and illustrator. Our own journalist Duna had the luck of sitting with Ruby for a talk around Goblin Valley, its creative and everyday inspirations, Dungeon and Dragons, LGBTQ+ stories that diverge from just romance, music and comics’ making, and more. Here’s the result! 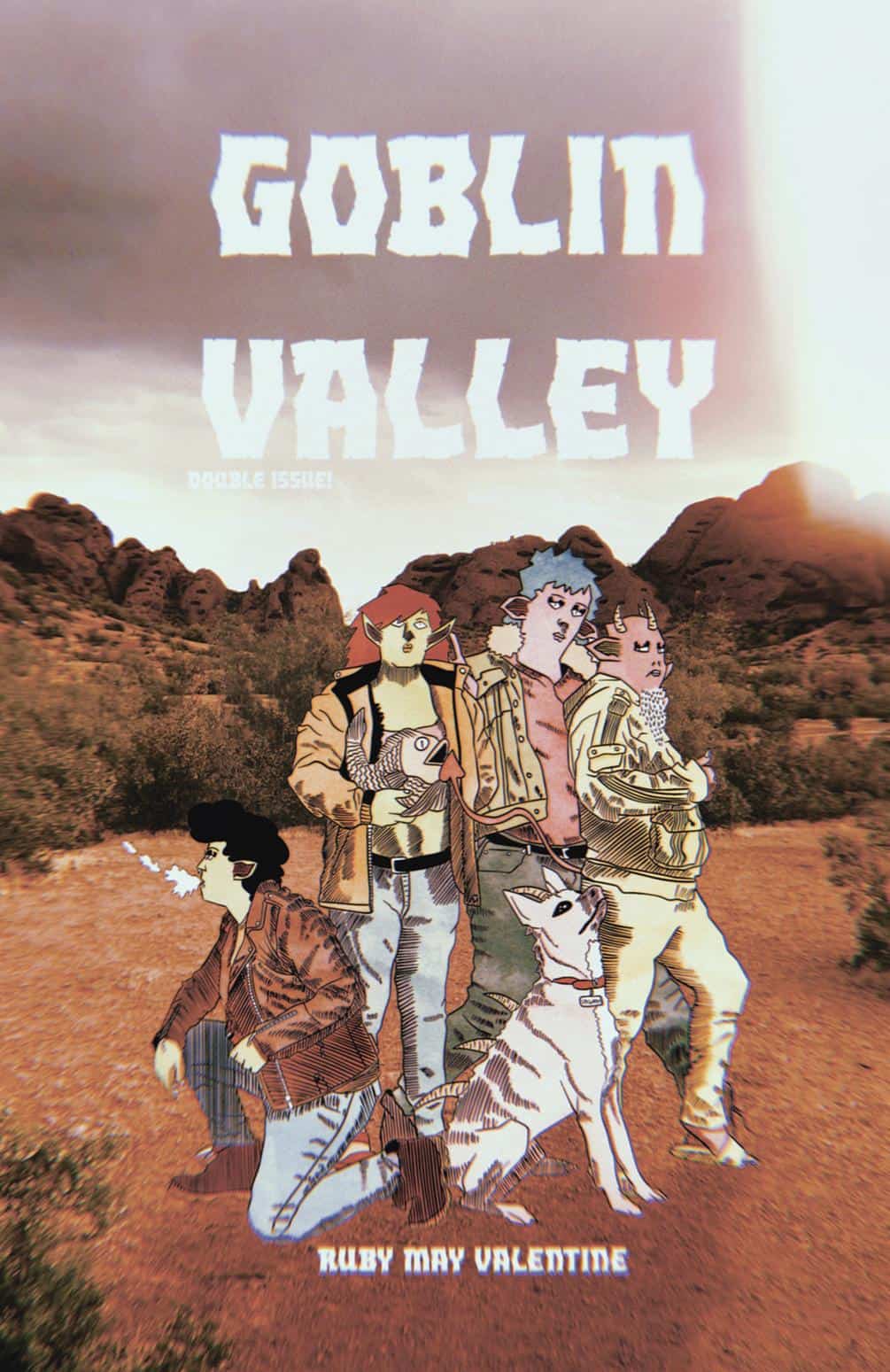 Comic Watch: First of all, thank you so much for talking with us at Comic Watch. Can you tell us a bit about the context of Goblin Valley, where the idea comes from, and what this fictional world means for you?

Ruby May Valentine: Of course and thank you too! Goblin Valley came up after I had played a dungeon world campaign where everyone played a goblin and I did these little character portraits of everyone’s characters, at the time I was wondering what my next comic would be as I had just finished my first 20 page comic The Dying Shadows, which was based on a absurdist comedy fanfiction I had written. And things just kind of fell into place after I realized I liked drawing goblins, I made a post-realization kind of precursor one page comic called ‘Good morning from goblin mountain’ that went viral on my old twitter account, which led to Goblin Valley as an ongoing series.

Now Goblin Valley is my favorite thing I work on, as for what it means to me it’s kind of my love letter to the desert, I live in a part of Arizona usually referred to as “the valley” so that’s how I came up with the title; I figured I would loosely base the location off of where I live, albeit a lot of the backgrounds come from reference photos I took all over southern Arizona… it’s really pretty out there, I’m hoping I can go back to Chiricahua on research so I can use that as a location in a future book. Also, I had already published issue #1 and sold like a bunch of physical copies when it was pointed out to me there’s a real place in the world called “Goblin Valley” which was kind of funny! so I’m hoping to get out there for research some time too, but yeah the desert is really beautiful and I guess a big part of the book for me is inviting people into that idea.

CW: The characters champion a charming mix of everyday vibes (like Rachel and Iris seem just two punks) with a big dose of fantasy setting (the most obvious part, they’re goblins!… but also the other characters that keep entering navigate the realm of magical setting a much higher degree of absurd). Why did you choose this combination of goblins and other non-human creatures with a casual, conversational style for it?

RMV: I guess it’s kind of based on my own life, I’m usually just hanging out with my girlfriend when I’m not working on comics so I kind of wanted to do this fantasy/scifi setting where things kind of start out sort of mundane in a way, where it’s just two girlfriends hanging out, but their lives kind of get turned upside down by an agent of chaos. And I guess what I’ve always liked about non-human characters is that I’ve always been able to connect with them better personally; a goblin or a dragon or something is kind of a blank slate to fill with personality I guess.

I play a lot of Dungeons & Dragons so that’s definitely a big inspiration for the books. I kind of approach them in a way where I try to think of what a fun D&D campaign would be to me and sort of improvise from there, and I’ve always liked D&D campaigns where role playing is more of a focus than combat so I guess the conversational aspect kind of stems from there. Also it’s just kind of funny, isn’t it? To take a fantasy creature such as a goblin that’s usually seen as repulsive or feral sort of, and then humanize them and give them beauty in a way, I guess I sort of am trying to subvert the goblin mythos hahaha! 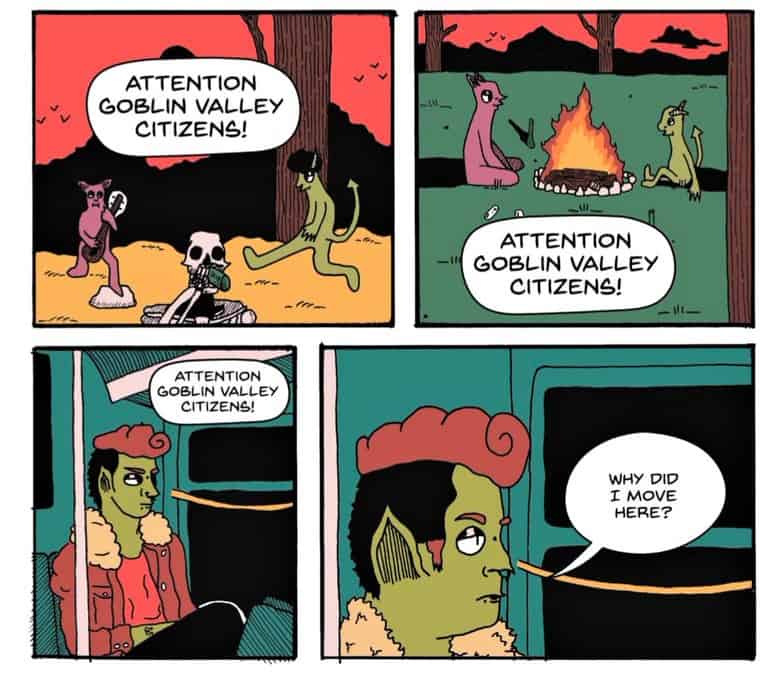 CW: The psychedelic, saturated, breezy colors of the comic, as well as its desert setting, remind me of Welcome To Night Vale in its channeling of a very specific aesthetic. Would that be an influence, and what other influences shape the “vibes” of Goblin Valley?

RMV: I love Welcome To Night Vale, I’ve been meaning to catch up on it… the last time I listened was when Dana was elected mayor which was probably enough years ago to make me anxious about catching up with it! But yeah, it’s one of my favorite podcasts and the first podcast I’d ever listened to… I didn’t have it specifically in mind when workshopping Goblin Valley, but listening to it during my teenage years certainly influenced how I approach art.

As for other influences, Simon Hanselmann’s work, Jojo’s Bizarre Adventure by Hirohiko Araki (especially for Goblin Valley #3 and onward), and I think a lot of the music I listen to influences my work as well… I listen to a lot of Young Thug, local bands like Red Tank!, and they’re broken up now but Gay Kiss, Savage Garden… honestly I should probably just make a Goblin Valley playlist because there’s too many to list here, also I was listening to The Magnus Archives during every night and day of working on Goblin Valley #1-#2 so that definitely impacted the work, and, like I said previously Dungeons and Dragons and also Dungeon World, definitely big influences for Goblin Valley!

CW: The playlist sounds like such a great idea to be honest! By the end of the second issue and moving towards Goblin Valley #3, the story drifts into a more action-focused, adventure, maybe even horror, narrative. What can we expect from the future Goblin Valley?

RMV: Honestly I think it should be what not to expect! My plan for Goblin Valley is to keep making it until I die of old age (hopefully there’s someone willing to keep making it for me after that, a successor) and I have tons of ideas for it in all types of different genres and settings. Definitely going to be action in the next issue, and horror might be popping up a bit more over the next few issues as I’ve been feeling more confident about my horror writing lately. But comedy is at the root of all of this as comedy meshes with just about everything, it’s a big staple of my life.

But yeah, I kind of want Goblin Valley to explore all types of different narrative ideas and be kind of an evolving thing that doesn’t stay the same… I don’t want it to get boring for me to work on because I love it too much for that so I want to explore everything my brain can think up within the confines of the Goblin Valley universe and its endless possibilities. 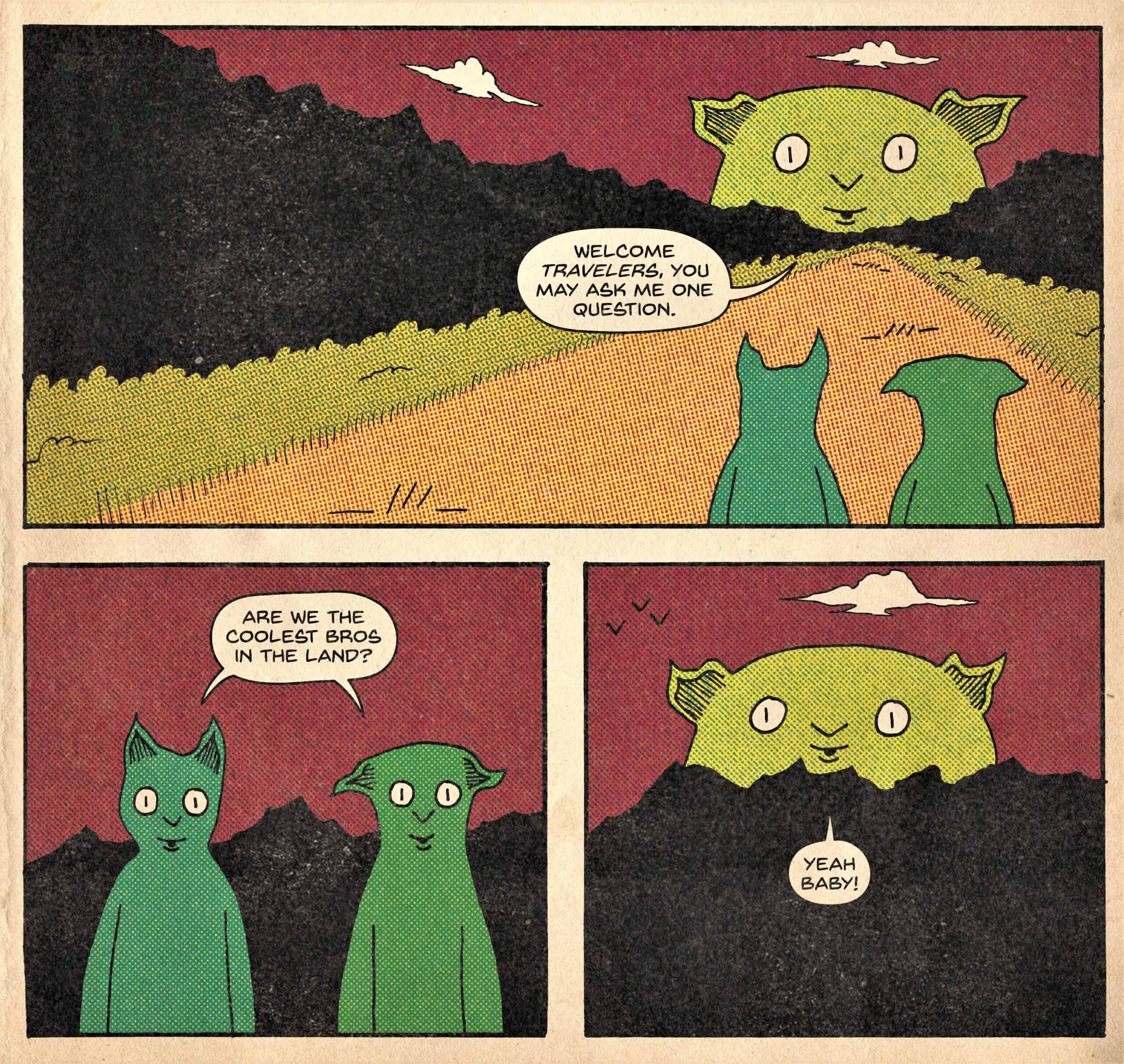 CW: Talking of its possibilities and characters, is showcasing LGBTQ+ themes any part of your process with them? If yes, how do you approach it?

RMV: Yeah definitely! Rachel and Iris are two lesbians in a relationship together but I guess I don’t want to approach that from a sort of romance angle, there’s other artists already doing lesbian romance stories (Liuxing Johnston for instance is really killing it in that department) so I kind of want to do everything else. I mean, romance will likely pop up in Goblin Valley at some point but I want to show lesbians just kind of doing cool and weird shit, because that’s the kind of lesbian media I personally would like to see more of.

But also in my 8 page comic that I just put out at my Instagram, as a non-main (but canon) story, ‘Goblin Valley: Mommy Issues’, Iris goes into her family trauma a bit.. Touching on how she was treated after coming out as trans, and I think I’ll probably end up doing more short stories about the more mundane and personal aspects of Rachel and Iris’ lives.

CW: Apart from your comic work, you also do electronic music and illustration. What are the difference between the creative processes of each of them?

RMV: I guess I approach them kind of similarly, albeit a tiny bit more planning goes into Goblin Valley comics. I come up with an idea and kind of improvise the flesh of it as I’m working on it, there hasn’t been a single Goblin Valley comic that has had a script for instance, hasn’t been one for any of my comics actually hahaha… I usually come up with like a rough outline of what I want to happen in the story and then improvise all the dialogue and plot elements page by page. And music is kind of the same: I’ll come up with a chord progression or something and then think of lyrics on the spot. I’ve been trying to write my ideas down a little more lately, though just for posterity I guess… I usually just keep most things stored in my thoughts.  As for illustration, sort of more straightforward I come up with an idea and then I try to bang it out as quickly as possible… At least get the sketch done so I don’t like forget how I want it to look!

CW: So… What is on your table for the future? What can we expect to see soon online by you?

RMV: Right now I’m working on finishing up Goblin Valley #3 this ones taking me quite a while because I’m going through a lot of big life changes right now, but I’m hoping to have it in print by either the end of June or mid July with a digital release following probably a month after first printing. And I guess you can always sort of expect me to be posting some illustrations here and there… I’m actually gonna be doing a new portrait series of the Goblin Valley cast soon for promo of issue #3 once it’s closer to completion and I’m ready for preorders.

Also, I have a prerecorded music set that will be playing on datafruits.fm on June 7th!  I’ll probably be making some more shorter comic stories in between working on Goblin Valley #3 as well but don’t want to get too distracted from it. I’d really like to see it finished as I switched to working on 11” x 17” boards for it, so the physical books will look a lot better as my art dimensions are traditional American comic dimensions now! But yeah, definitely look out for illustrations I’ll be posting here and there and then maybe a new music EP sometime this year, but most importantly Goblin Valley #3!!! 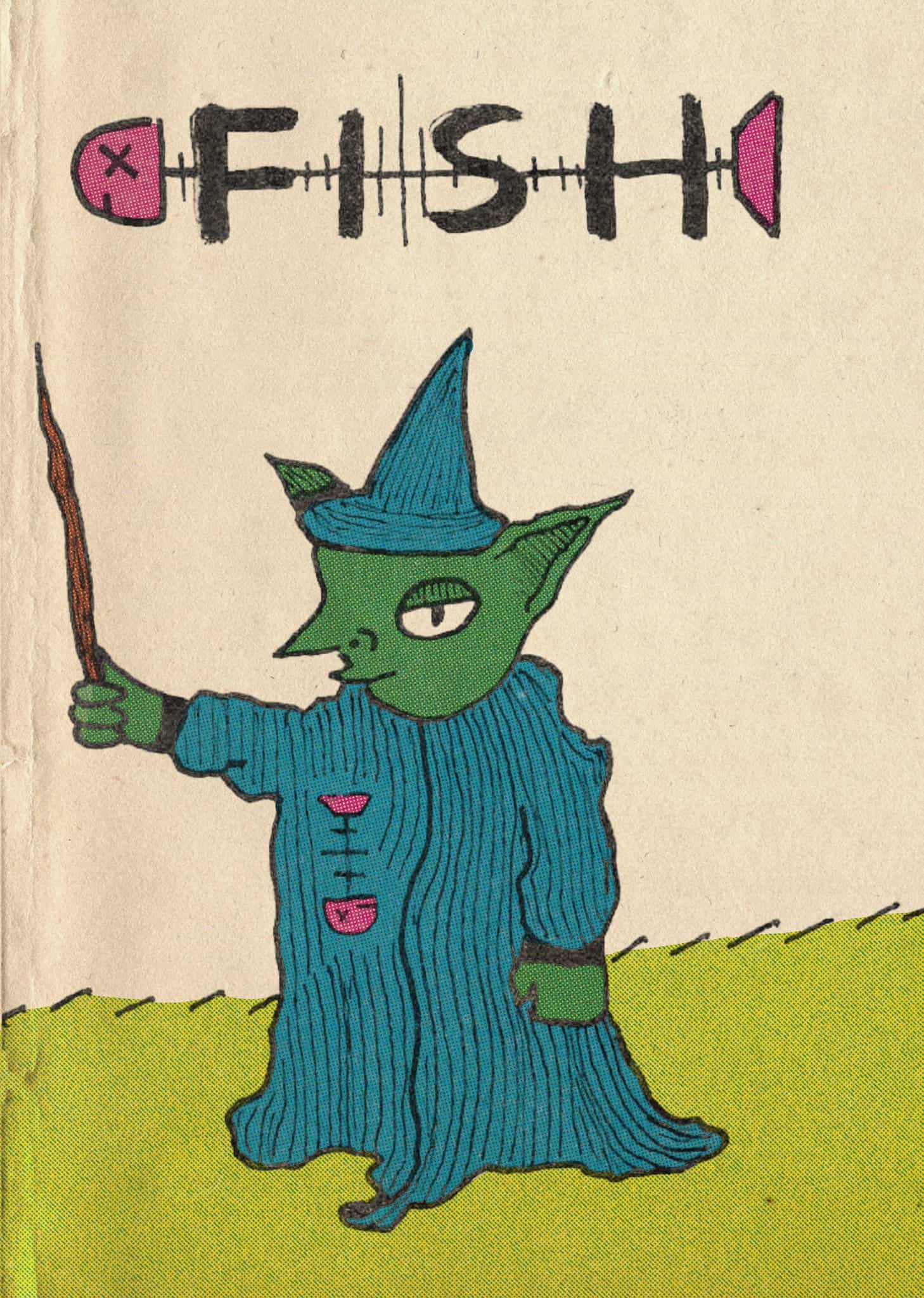 Goblin Lesbians In The Desert, Babe! – An Interview With Ruby May Valentine