What draws you into a story? What makes a tale a page-turner, going from just ‘an interesting read’ to a journey across another world? Well, individual results may vary, but for me, it’s a riveting story, nuanced characters, and deep world-building, packaged in a genre that is at once sombre and darkly-toned, and also technological and gritty. It’s one of those rare diamonds in the rough, a story that speaks to your soul while it feeds your mind and piques your imagination.

And no other story has done this for me like the manga Gunnm/Battle Angel Alita.

Admittedly, this manga is a niche title. A post-apocalyptic, sci-fi/cyberpunk epic, known as Gunnm (Gun Dream) in Japan and other manga-saturated countries (France, Germany, Italy, Russia etc), and Battle Angel Alita for English-speaking audiences. A 23-year-old manga artist (or mangaka as they are known in Japan) by the name of Yukito Kishiro began drawing Gunnm in 1990. The main character, known as Gally in the original, was actually a reworked cyborg police officer character in an unpublished manga called Reimeika. Gunnm was Kishiro’s first big break, and he had trouble believing it was real until he saw his work in the pages of Shonen Business Jump, a trade magazine for serialised manga comics in Japan in November 1990. 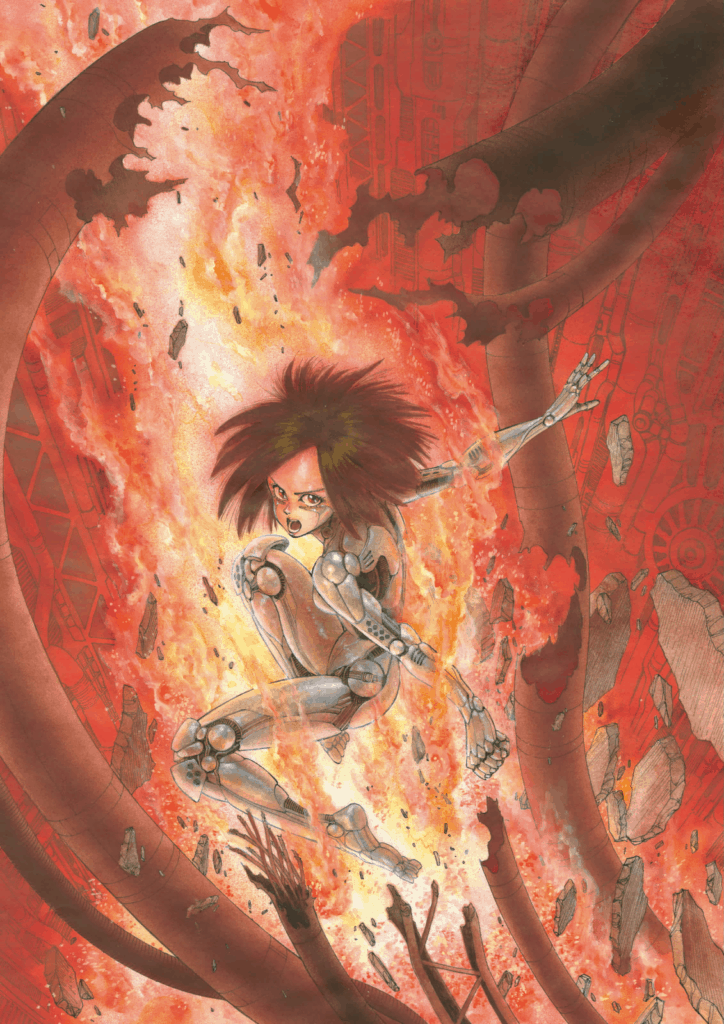 Just What is This ‘Manga’ Stuff, Anyway?*

*For those that are well versed in manga, you can skip ahead to the next section.

Just in case you’ve never had the opportunity – or good fortune – to read a great manga before, I’ll start at the beginning. Manga is the name for Japanese adult comics. Yes, adult. Definitely NOT for kids. As such, they can cover all the usual adult-orientated themes such as love, hate, infatuation, anger, desire, crisis, emotional anguish, war and gruesome deaths. There’s usually a good helping of that last one. They are very popular in Japan, and monthly, serialized mangas have been produced for years, and in some cases decades.

So what, you might think, I’ve been reading [insert your favourite, long-running superhero epic here] for literally years. I’m not afraid of an ingrained franchise. Well, where western superhero epics change artists, writers – and sometimes even publishers – and flex with the ideologies of the times, mangas can be one writer/artist affairs, and it can be their life’s work. That’s dedication, folks. As such, they can be a deep dive into the psyche of the mangaka (as they are called), and explore topics that will bounce around in your head for years!

Also, manga can be slightly problematic for the new, western reader. This is mainly due to the lens of Japanese culture through which the story is told. This can be confusing for a reader lacking context, but if you are aware of it, there are a host of rich, and fascinating stories to discover and enjoy.

Wait, I’ve Seen the Movie. Isn’t it the Same? Won’t Reading the Manga Ruin a Sequel?

Like most movies, 2019’s Alita: Battle Angel, while being faithful to the source material, is not the exact same story. It changes the order that things happen, has a character that appeared in the OVA (short anime from the 90s) that isn’t in the manga, and ends around the first third of volume 3 of the 9 volume original manga run. Also, reading forward will not spoil future movies. While it’s expected that future instalments will borrow beats from the source, it will still be its own telling, and will vary enough from the original work to keep you surprised and entertained, so no worries there.

And while the movie is fantastic (the best western adaptation of a manga to date), there is so much more in the manga. You are really missing out if you don’t give it a shot.

But What Makes Battle Angel Alita So Good?

Battle Angel Alita (BAA), at its core, asks the reader some very deep questions. It’s heavily influenced by the cyberpunk genre of the 1990s, and so asks the classic cyberpunk question of ‘what makes us human?’ But beyond that, it delves into the questions of ‘what is fate’, ‘can we overcome our own karma,’ and ‘even in the depths of despair, can we persevere?’ All good, interesting stuff.

Then there’s the world-building. Post-apocalyptic? Check. Stratified society, where the ‘haves’ live above and isolated from the ‘have-nots’ who toil below? Check. Wasteland outside the city walls with roving bands of killers? Check. Dangerous, gritty, grinding existence within the walls, where those with the will to survive replace their flesh with machines in an effort to survive? Check. Violent combat sports displayed on every screen? Check. Police replaced with bounty hunters who collect heads for pay? Check. Check. Check.

And yet… there is kindness in this future dystopia.

This sky city, known by various names in the various editions, including Zalem, Salem, and Typharies, dumps its waste out a chute in the bottom which lands in a big scrap pile that the dirt-siders scavenge through for resources. One such denizen of The Scrapyard is Daisuke Ido, a cyberdoctor who helps out the downtrodden cyborgs of The Scrapyard, is picking through the trash pile looking for useful parts one day when he discovers the torso of a deactivated cyborg. It is female, and he’s surprised to discover that her brain is still alive (the only part of her that is biological). He takes her back to his surgery and rebuilds her over months. She’s lost her memory, through some traumatic experience that may have been the reason she was there in the first place. 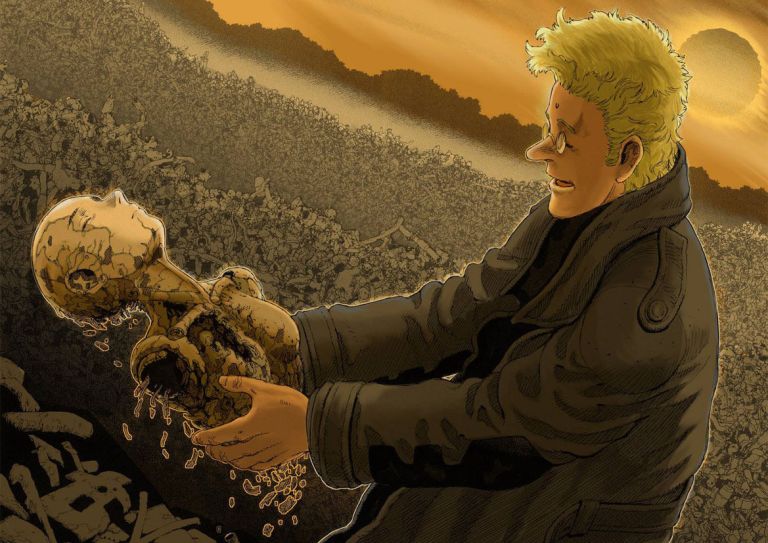 Cyberphysician Daisuke Ido finds a deactivated cyborg torso in the scrap pile under the floating city, but the brain within is miraculously alive!

Ido gives her a name, Gally in the original Gunnm, or Alita in the English translation. This young woman has to relearn her context within her new surroundings and then begins a journey in search of self, and she has a lot of self to rediscover.

Alita, Her Friends and Her Foes

Alita, at her core, is a force for change. Whether it is those that ally with her, recognising her strength and perseverance, or those that fall before it, BAA has a long list of side characters, many of whom really grow on you, and some of which die horribly. This gives Alita’s actions real consequences, which she surely struggles with at times. At her core, Alita is a character you can relate to. She’s no Mary Sue. Alita is in fact a true, struggling example of ourselves. You’ll find something in her attitudes, choices and growth throughout the story that resonates with you.

The supporting characters are many and varied, from her love interests (this isn’t a romance manga, so there are only a few), those who are attracted to her, and those that choose to help her on her path as they see the value and strength of her convictions. From the shallow teen Hugo (or Yugo in some translations), obsessed with getting to Zalem, who is Alita’s ‘first love,’ to the rebel radio operator Radio Kaos, with the power of psychometry (able to extract memories and skills of the previous owner of objects), the supporting cast is strong, varied and have their own arcs running in the background.

The foils on Alita’s journey are many and varied, from the massively-framed endorphin addict Mukaku, who kills for pleasure and to feed his need for brain tissue, to the amoral mad scientist Desty Nova, to the chief of the Ground Investigation Bureau (GIB) of Tipharies (Zalem) Bigott Eisenburg, Alita’s adversaries keep her on her toes. And yet they are not all bad. 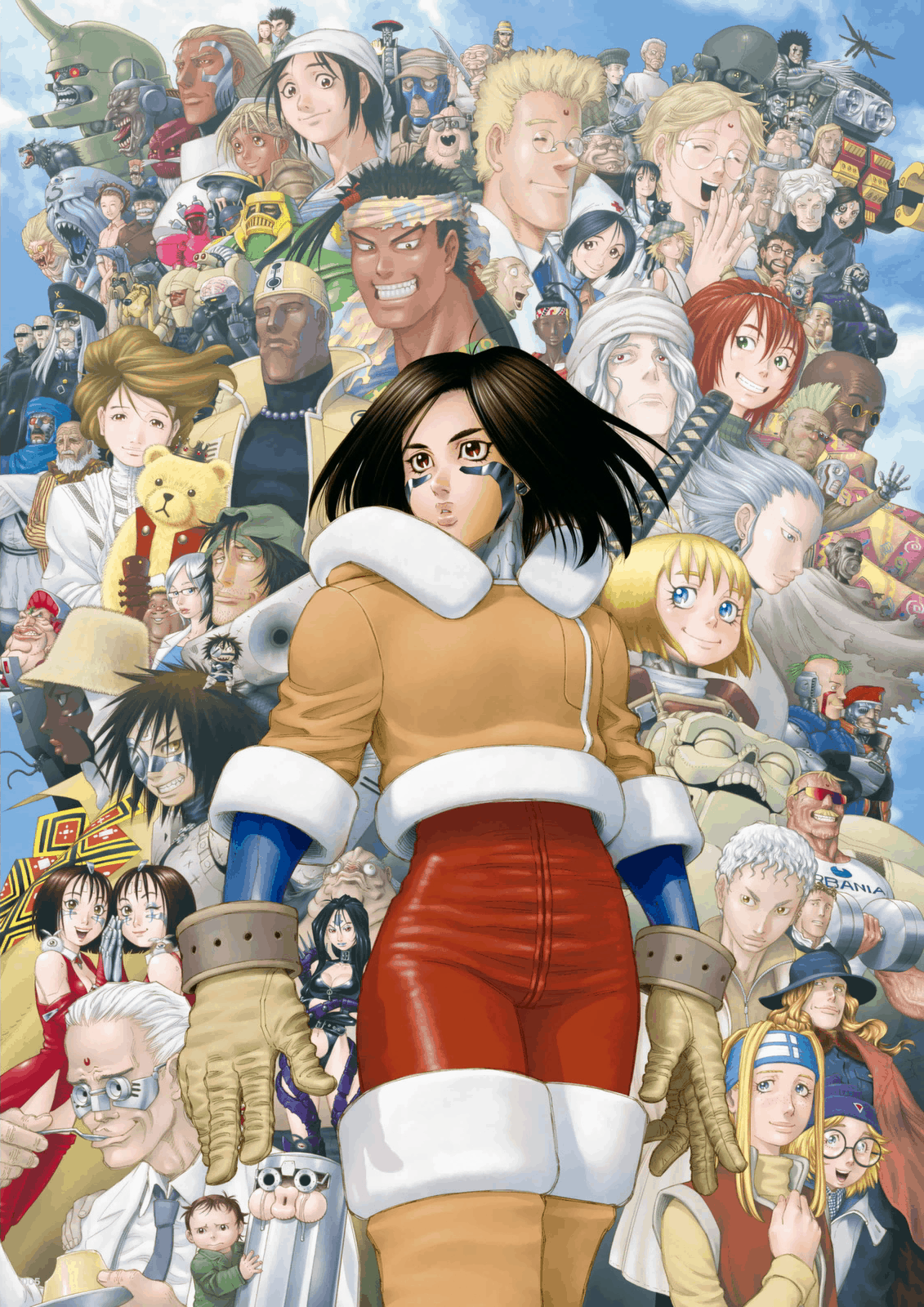 All the major characters in the first 2 Alita Chronicles – the Original Series and Last Order.

All is Grey, and That’s OK

Just like life, Alita’s interactions with the other characters during this amazing tale are not all cut and dried. Nova ends up helping Alita on almost as many occasions as he puts roadblocks in her path, for example. Yokito Kishiro has said in interviews that, just like in life, most people in his epic story act in a manner they believe to be correct. In this same vein, Alita discovers the flawed, yet all too human side of quite a few of her foes, and comes to understand their motivations, even while she is besting them. This gives the story a solid grounding, with characters that feel like they could really exist. 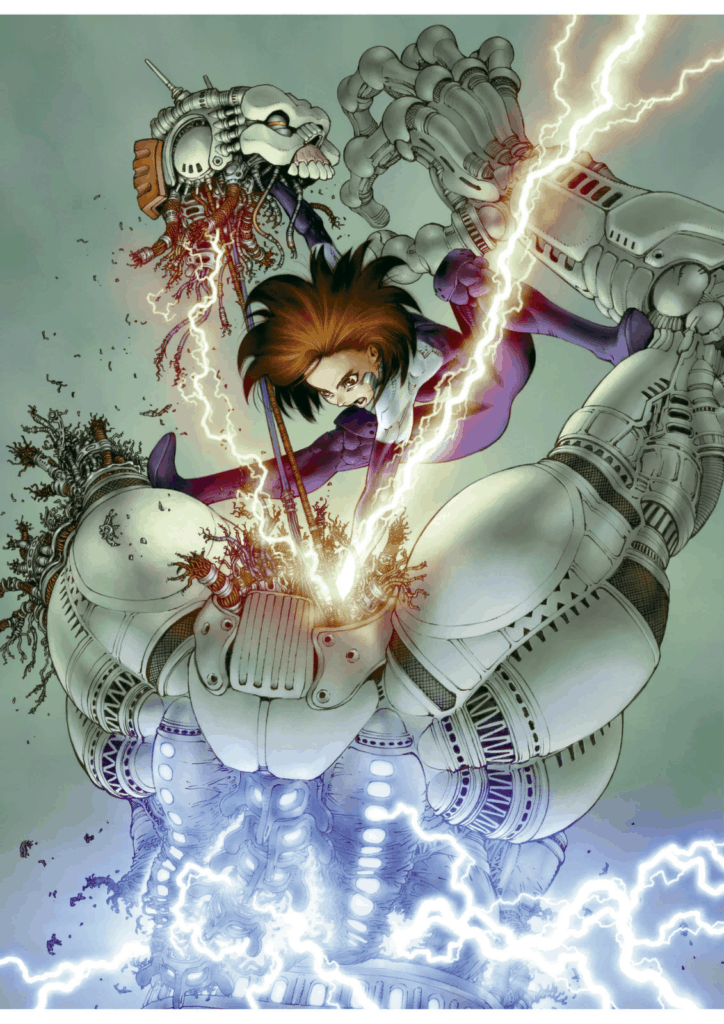 Another facet of this terrific manga that really draws you into the story is the art. Kishiro-kun is both writer and artist, and his style, while subtly morphing over 30 years of working on this epic title, has strong detail, great characterisation, and a fluid sense of high-speed movement. This all comes together to draw you through the story, and if post apocalyptic cyberpunk is your jam, will have you staying up late, not wanting to stop reading! 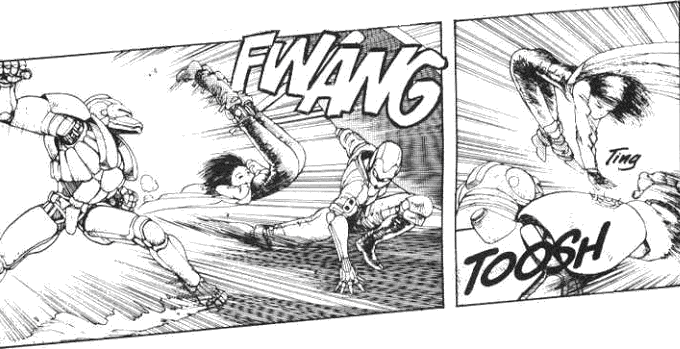 Alita’s fighting style, Panzer Kunst, involved training in zero g, which allows her to move through the air in a fight like a parkour master.

Battle Angel Alita wastes no time in getting stuck into the story. There is little filler. It’s like a rollercoaster ride that hits top gear and just keeps right on going. It’s a favourite of mine, and it might just become one of yours, too.

Give it a shot. Available on Kindle, Bookwalker, comiXolgoy, Google Play, iBooks, Kobo, nook, and in dead tree format from Amazon and most reputable booksellers. Also, as of August 2021, a new, small format softcover version has been released to English audiences.

Ray D., also known online as Maxtac Jurai, @OptimizticOzzie, and ‘that guy who talks too much about Alita: Battle Angel,’ lives near Sydney, Australia, loves his family, writing, good stories, movies, gaming, RPG’s, and geekdoms of many kinds - but in his heart of hearts, he’s a #AlitaAdvocate through and through.