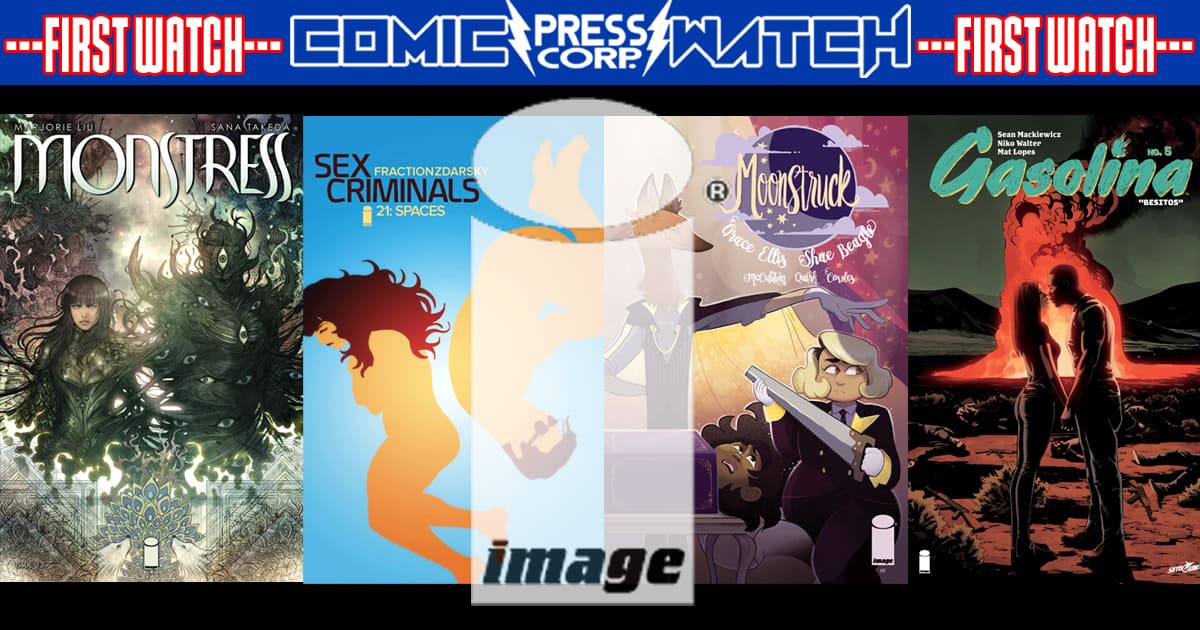 Image comics doesn’t disappoint for #newcomicbookday with everything from smash hits Monstress and Sex Criminals returning, a new Sci-fi drama Dissonance and a whole lot more! 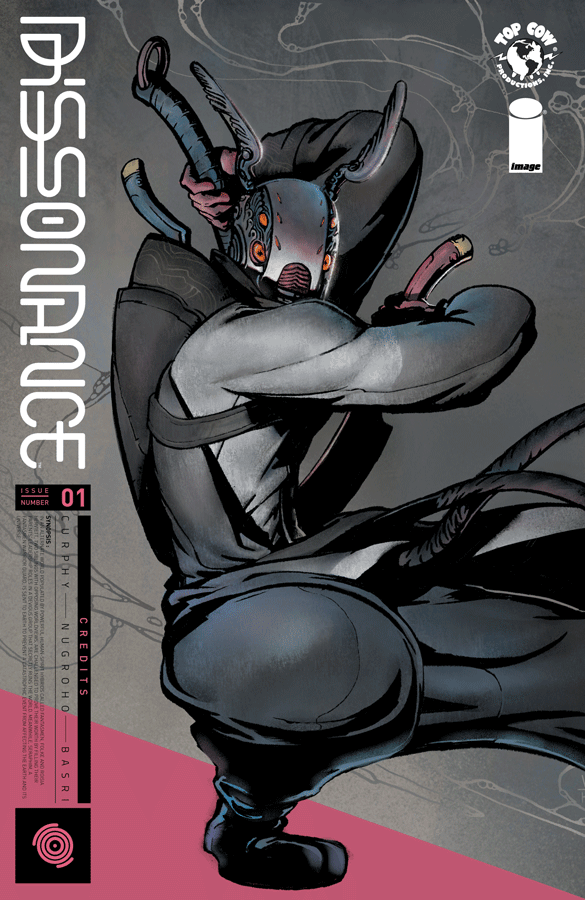 First up is From designer MELITA CURPHY, writer SINGGIH NUGROHO, and featuring the art of SAMI BASRI (Power Girl, WITCHBLADE), comes a fantasy drama set in a sci-fi world unlike any other.

In an alternate world where Earth is populated with powerful human-spirit hybrids called Fantasmen, Folke and Roisia Herviett, two siblings with opposing worldviews, are challenged to prove their worth and take up their parents’ positions in a devious group who secretly run the world. Meanwhile, Seraphim, a Fantasmen warrior guard, is sent to prevent a catastrophic event from affecting the Earth and its own universe.

Maika has spent most of her life learning how to fight, but how will she fare when the only way to save her life…is to make friends?

“FIVE-FINGERED DISCOUNT,” Part One Up

Is down and black is white and the sex isn’t happening—neither is the crime. WHAT IS THIS BOOK EVEN? After the heartbreaking, albeit totally unsurprising, finale of FOURGY!, our leads find themselves in the arms of others while the fate of the whole universe hangs in the balance…ish!

Wait, really? This is the end of the arc? No way, you can’t possibly wrap this up in one issue! Julie and Selena are in a fight! Chet doesn’t have their centaur butt back! Don’t tell me that horrible fox magician is getting away with this!! These must be an action-packed 22 pages, I’ll tell you that much.

Detective Graymercy and Molly connect with an occultist in their attempt to track down the missing Adrian. Meanwhile, Adrian struggles to maintain his sanity as the extremists who hold him prisoner subject him to terrible mental torture. Their goal: to coax diabolical secrets from Adrian’s past life.

A dead body is discovered, and some of the crew find Jesus in the unlikeliest of places.

“EXTINCTION IS THE RULE,” Part Four A love so strong that not even the end of all things can destroy it. A shattered family united in the face of infinite futility. A victory in one dimension, a loss in another. The chain is broken here and will never be fixed.

“AWAKENINGS II,” Part Five In the wake of an officer-involved shooting, Rowan’s lies are threatening to unravel. The Ascension threatens tragedy for those closest to Rowan.

“NO ESCAPE,” Part Two Retreating to Earth, Zelda has shut the door on her problems back home. But those problems are now her enemies. And they’ve decided to kick down the door….

“GUT CHECK,” Part Five A moment of truth for Roberta Tubb. A moment of reckoning for Coach Boss.

Mysterious vigilante Renato Jones showed the One% that for all their money, for all their power, they are not untouchable. But now they’re pushing back, and the resulting class warfare may be more than even Renato can handle. When full-time villains control the whole world, the only hero who can take on the job is self-employed…a Freelancer. KAARE KYLE ANDREWS proudly presents Season Two of the most dangerous comic on the planet! Collects RENATO JONES SEASON TWO #1-5

The official comic continues! As the Tenno rescue mission evolves into an investigation of an ancient Orokin mystery, the twice-defeated Captain Vor prepares a desperate but deadly assault. Plus—the return of Excalibur?

With his enemies in pursuit, Willy travels to the Underworld in hopes of making an alliance with his father’s greatest enemy. Meanwhile, his mother reflects upon the events that banished her and her son. Also, Loyal Backstabber’s origins are revealed!

Fire and blood have awoken something ancient beneath the earth. It feasts on flesh, and no one can stop it. This is how the world ends. Grab a loved one!

“SHOOT,” Part Four Potential 2018 Eisner Award-winner for Most Brutal Beat Down in a Continuing Series! Find out why RINGSIDE’s the ongoing premier series of choice for broken dreams and shattered spines!

The war for Eden is over, but Laura faces the most important choice of her life: What to do with her son Mark’s future.

The Bowmans are drowning in the flood of fresh blood. With the cops hot on their tail, can they survive the rising tide?

Journey into the thrilling world of international espionage as one of Britain’s most covert MI-6 divisions, the Nest, recruits a brand-new secret agent to their team: Spy Seal! Follow the newbie spy and his furry colleagues on exciting train rides, high-speed car chases, high-flying air adventures, and down secret underground tunnels, all in an effort to hunt down a dangerous British-turned-Soviet double agent—a slippery spy who poses as an upscale art dealer while covertly killing off important figures of Parliament. What is the reasoning behind this double agent’s terrorist actions? Why are three masked bunny rabbits vandalizing paintings at every London gallery? And just what is this elusive Corten-Steel Phoenix anyway? Check out this deluxe format edition to decipher the answers to these and other puzzling questions in RICH TOMMASO’s (SHE WOLF) latest series, visually reminiscent of such classic comics as The Adventures of Tintin and Usagi Yojimbo.