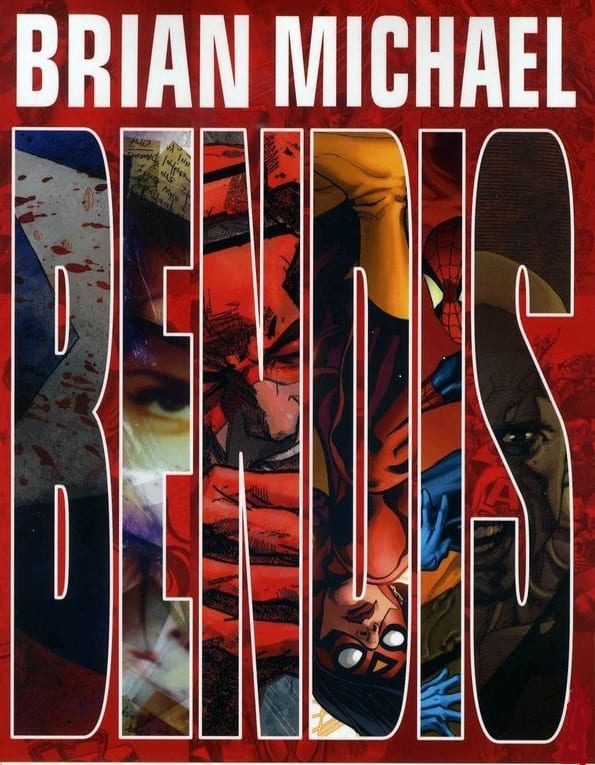 With the news breaking recently of Brian Bendis departing Marvel’s land of Midgard for the DC comics multiverse in a very publicized and controversial move, we thought it would be a good time to look back on his career specifically at Marvel and examine in a two part article some of his major contributions to Marvel for better or worse…

Some History Before Marvel:

Before looking at his time at Marvel it’s important to note that by the time Brian Michael Bendis arrived at Marvel he had already been in the comic book industry starting at Caliber Comics where he would form relationships with people like David Mack, Mark Andreyenko, and Mike Oeming. A huge fan of the crime/noir genre his works including ‘Fire’,’ A.K.A ‘Goldfish and possibly his most famous early work ‘Jinx’ all happened at Caliber through the period of 1993 through to 1996.

In 96/97 Bendis moved to Image comics where his work caught the attention of one Mr. Todd McFarlane who impressed with Bendis and his style saw Bendis being given the responsibility of bringing his experience with the crime/noir genre to Spawn spin-off series Sam and Twitch which he wrote for twenty issues. This period at Image up to 2000 saw several other collaborations but his co-creation of superhero cop/noir series  ‘POWERS’ in collaboration Michael Oeming and which remains, in my opinion, his best work outside of any work done for Marvel.Critics thought so too as this series went on to garner him an Eisner Award for best new series in 2001 and Bendis would go on to win more for best writer in 2002 and 2003 for the same series. It was at this point in the 2000’s that would see Bendis join Marvel. 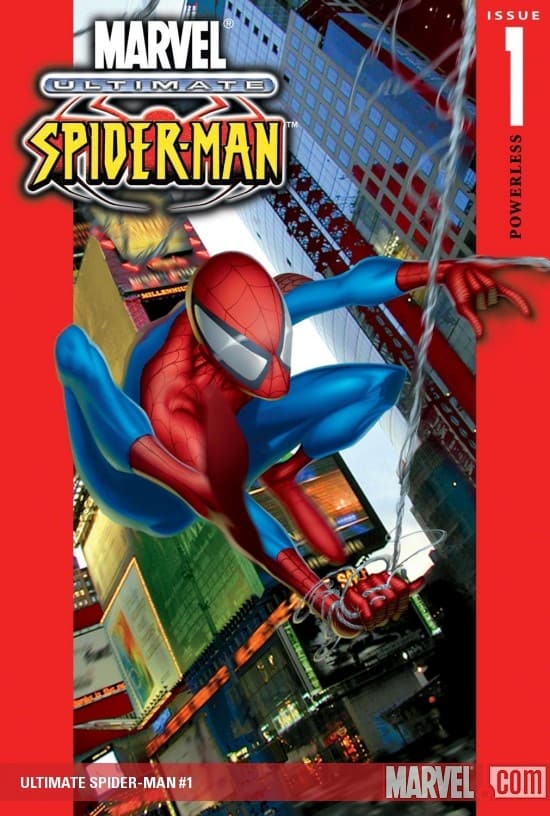 David Mack Bendis’s longtime friend started working at Marvel on Joe Quesada’s “Marvel Knights.” Quesada having seen Bendis’s work on Jinx was offered him the opportunity to present story ideas for the work and although nothing came of it  did lead to him being hired on recommendation from Quesada by then Marvel president Jimmy Jemas to produce Ultimate Spider-man a series that aimed to update the 1960’s origin stories of Marvel’s mainstay characters to capture the imagination of a new, younger more modern audience… Bendis took the original 7-page origin and turned it into an 11 issue arc which would see the collaboration between him and co-writer mark Bagley set the record for the longest collaborative run from issue #1 to issue #111 which is even longer than the Stan Lee/Jack Kirby run on Fantastic 4. This run did exceptionally well and even saw it often outselling Marvel’s main spiderman title ‘The Amazing Spiderman’ on several occasions.

Ultimate Spider-man #1 is to this day a highly valuable and sought-after collector’s item.

Bendis would go on to subsequently pen a whole series of “Ultimate” books including ‘Ultimate team up’,’Ultimate X-men’ and ‘ Ultimate fantastic 4’ amongst others and later in collaboration with Sarah Pichelli would co-create Miles Morales who would replace Peter Parker as the Ultimate Spiderman. His run on this comic has spanned from 2001’s Ultimate Spider-man all the way through the change to ‘Ultimate Comics: Spider-Man’, ‘Miles Morales Ultimate Spider-man’ 2015 then Spider-man: Miles Morales 2016 ongoing is an unprecedented run in the history of the Spider series books and ultimately or arguably makes Bendis one of the single most influential forces in the tone, direction and the history of the modern spinoffs off the Spiderman mythology outside of the main title books. 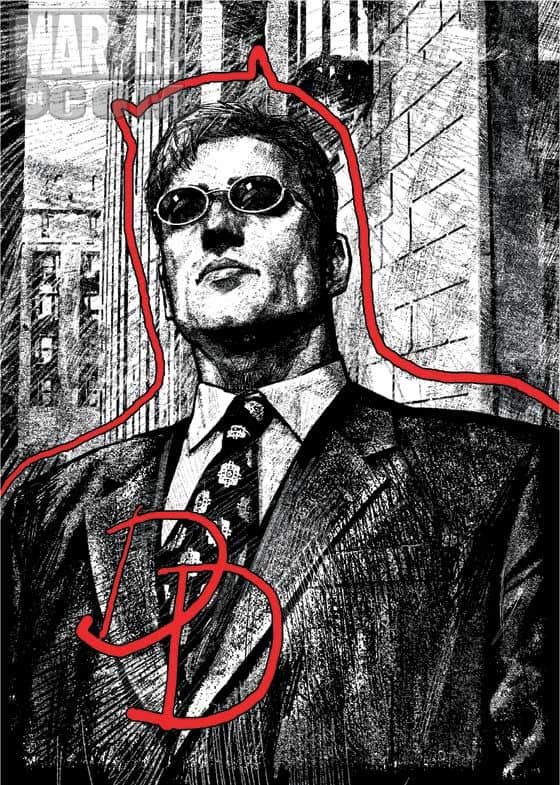 Concurrently with his work on Ultimate Spider-man Bendis was offered writing Daredevil, ringing in a 55 issue run from 2001 to 2006 which saw him mostly collaborate with  Artist Alex Maleev.  This run which to this day remains this writer’s personal favorite writing from Bendis which was described by a 2005 IGN article as follows and I quote:

“Simply put, the Bendis/Maleev run on Daredevil is easily one of the greatest creative tenures in Marvel history. Yes, it even rivals the great Frank Miller works of old. Miller redefined Matt Murdock’s world, but Brian Bendis has pushed it to new heights without retreading old territory.”

Bendis took the standard superhero story well beyond the run of the mill superhero trope’s often used as fallbacks by lazy comic book writers and distilled it down to the story of men having their worlds stripped from them and what happens to these men when they have to rebuild those worlds… This run saw Daredevil outed to the world as Matt Murdock and him becoming the new Kingpin of Hell’s kitchen!! It’s a writing tour de force which combined with Maleev’s  artwork make for riveting reading. 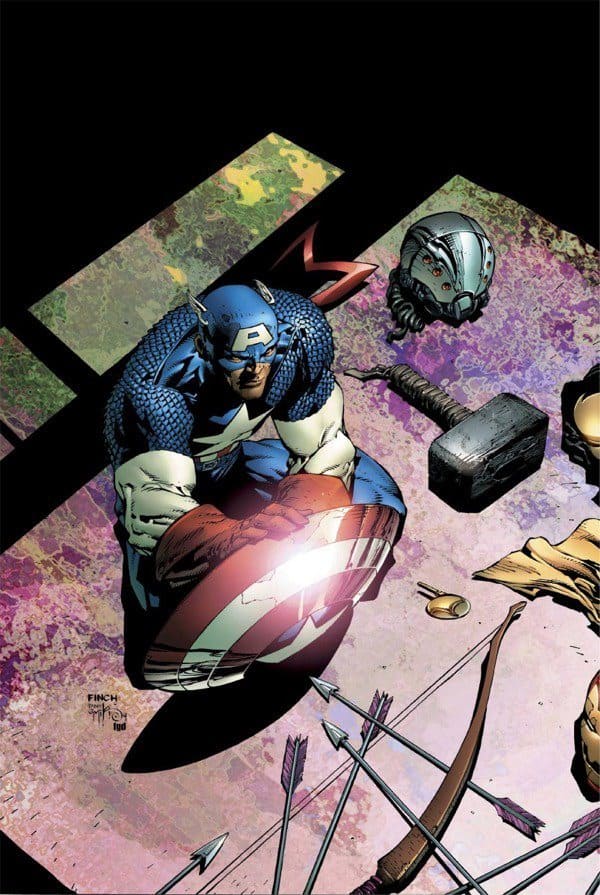 2004 marked the beginning of Bendis’s run on the Avengers kicking off with the large-scale crossover event that would see the destruction of the traditional team fans had come to know and love. “Avengers Disassembled” which really marks Bendis’s jump on point with the title ( although he had been overseeing the last issues of Avengers in the run-up to this point) would see major changes to the team including the death of characters like Hawkeye and the complete reconstruction of the team by Bendis. With Bendis now at the helm, two new Avengers titles were launched  ‘New Avengers’ in  November 2004 helmed by Bendis and artist Michael Finch as well as ‘Young Avengers’ written by Alan Heinberg 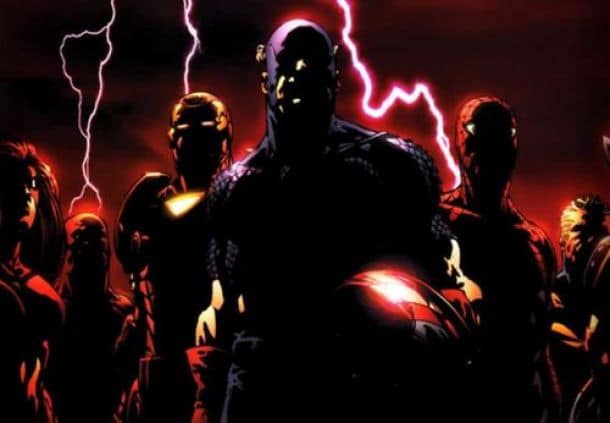 Bendis run here ran in two volumes. volume 1 from 2005 to 2010 and volume 2 from 2010 to 2012 and saw the starting roster include: Luke Cage, Ironman, Captain America, Spider-man, Spider-woman, godlike character  Sentry as well as Echo but in the guise of Ronin and Wolverine. This period may be the first to start seeing fans question Bendis’s choices and experimentation with the team and his writing thereof which would end at issue 64 in April 2010. The Title would be relaunched as part of Marvel’s “Heroic Age” rebranding campaign under Bendis’s direction in June 2010 and would run till 2012 at which point writing responsibility of volume three was handed over to Jonathan Hickman who would continue the stories of the “unsanctioned” Avengers team

His further involvement with the Avengers would include “Secret War” limited 2004 -2005 the second title “Mighty Avengers’ in 2007 with Frank Cho up to issue #20 , he then moved on to pen  ‘Secret Invasion’ crossover in 2008 which would lead into the Dark Reign storyline culminating in the the launch of the ‘Dark Avengers’ which would end with the crossover in a collaboration which would reunite him with Olivier Coipel with whom he had done House of M, in 2009 called Siege.

In 2012 Bendis wrote the first 12 issues of a new Avengers title called ‘Avengers Assemble” to coincide with the release of Marvel studios motion picture “The Avengers’ which he wrote for eight issues. His final arc as Avengers writer concluded with the story arc called ‘End Times’ in 2012.

Bendis’s run on Avengers and the subsequent spin-off books as lead writer is certainly one of the most polarising runs in his career at Marvel with old-school fans being less than pleased with his ground-up reconstruction of the teams and experimentation with members like Sentry as well as a continuity set is which is plagued with several continuity issues along the way. However, his hand in shaping how the Avengers have become Marvel’s key property can clearly be felt with his run on the Avengers property considered record-breaking in duration. 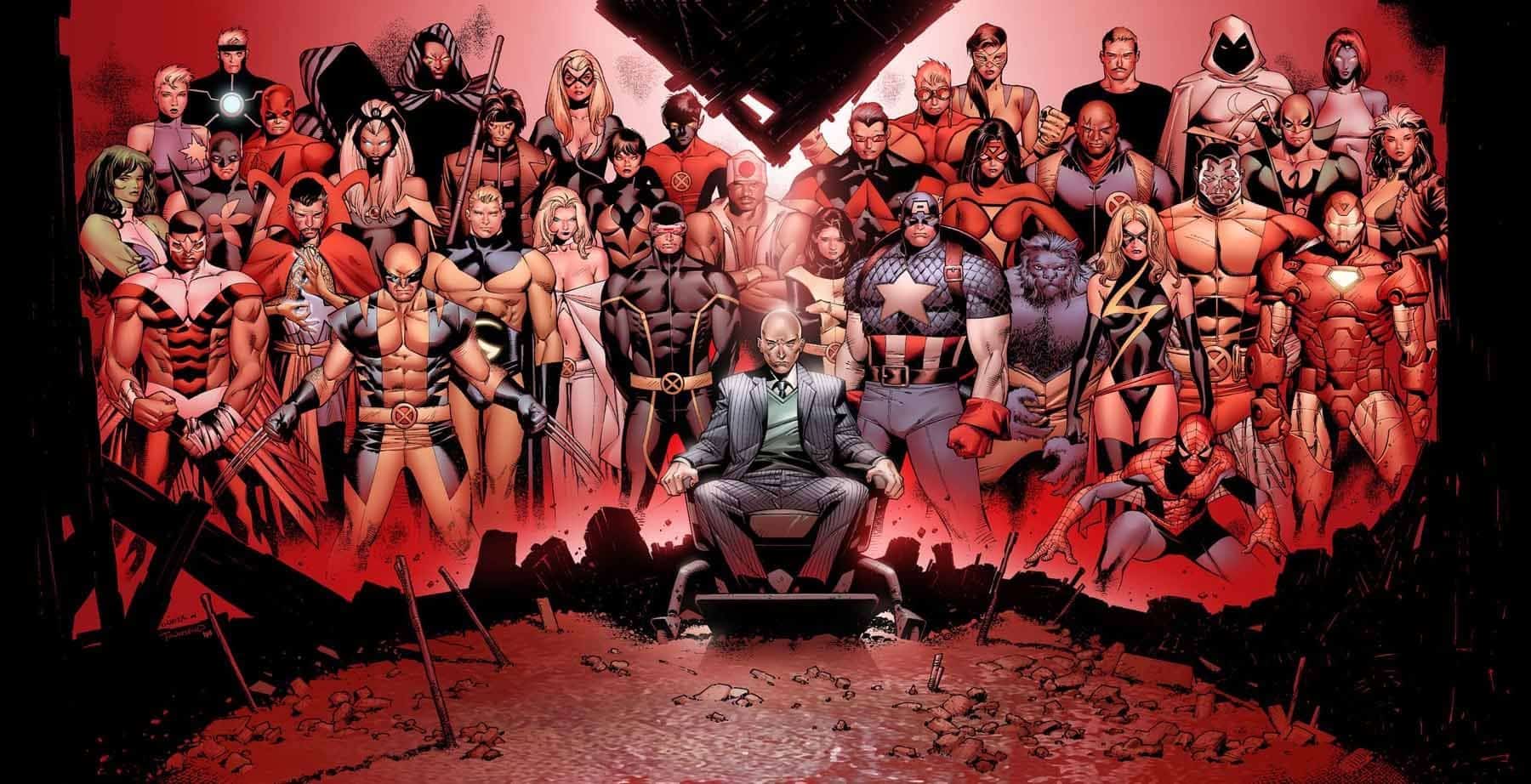 In between ‘New Avengers’ and ‘Secret Invasion” Bendis, in 2005, had his first run at the a mutant book as lead writer for House Of M with Artist Olivier Coipel drawing which features a completely different world after an unhinged grief-stricken Scarlet Witch changes reality to get back her lost children completely replacing the earth 616 reality with a new one where the family of Magneto reigns supreme.

The story ran over eight core issues with crossovers running across multiple titles and a commercial success with the first two titles selling ranked number 1 in sales those months and the first issue selling over 233 000 copies the culmination of which sees Wanda utter the now famous (or infamous depending on who you ask) phrase ” No more Mutants” the fall out of which would be felt through the X-books going forward. 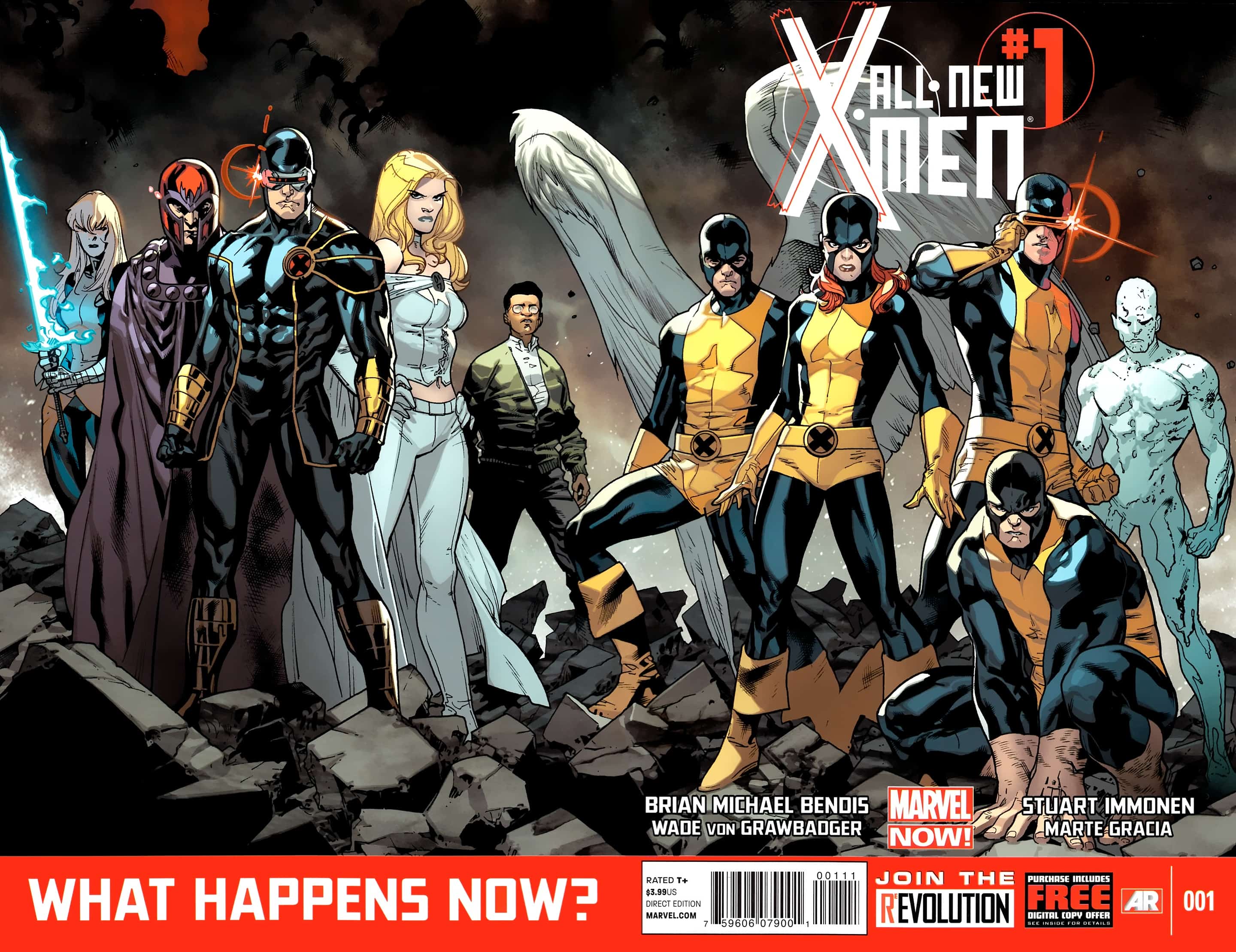 Bendis at this point officially bowed out of the Avengers in favour of debuting All-New X-Men in January of 2013 with art by Stuart Immonen and Mahmud Asrar in volume 1 and Mark Bagley in volume 2,  which revolves around the arrival of the original or O5 time-displaced X-men and places them in a modern world with their older present world counterparts in a current setting further adding to the X-men’s very convoluted timeline history which often leaves even longtime fans scratching their heads when puzzling through it.

In Part Two of this retrospective, I will include an examination of his run on Uncanny X-men as well as his work and another of his creations, Jessica Jones, amongst other highlights in his 18-year career at Marvel.