I was lucky enough to get the chance to interview writer Matthew Klein, and talk about his upcoming new series, Crashing, from IDW!

Comic Watch: Hello! First I want to take the time to thank you for doing this interview with me! I’ve heard a lot about you from your time in the comic industry, so I’m so glad to see you releasing something!

Matthew Klein: I’m super excited to be doing this with you! I’m a huge fan of Comic Watch. I love how you foster such positivity in the comics community! It’s something we can always benefit from more of.

CW: This is your first time having your own story published, correct?

MK: Correct! For comics, this is my first published work getting out there. Earlier this year I released a webcomic called No Rhyme Or Reason via Tapas with Rich Wojcicki on art and Nick Philpott doing letters. It’s a pulpy 1980’s noir in ten parts. Before that I’ve been writing for well over a decade. I started my first theatre company when I was twenty-one and have been producing and getting plays I’ve written on Off-Off Broadway, in Toronto, Orlando, and a few other spots. And for the past couple years I’ve been writing audio dramas for a podcast called April Is The Cruelest Month writing alternate history tales set against major historical events that take place in April, like Abe Lincoln’s assassination, the tornado outbreak in the south in 2011, and I’ve been working on a story set during the sinking of the Titanic. After about a dozen years writing plays, audio plays, short films, even a music video treatment once, I’ve finally turned to comics and I couldn’t be more excited to work in this medium that I’ve been a fan of for so many years, and that has an incredible amount of talented people I’ve adored working with.

CW: One of the things I LOVED about issue one was the world building. You have your own little superhero universe and yet the main character is someone so real. Why did you choose to follow someone like her and not the heroes within your world?

MK: Thank you for that! Because I lost the ability to judge how we were doing with that world building about four drafts ago!!!! The world building is all from our team, Morgan Beem doing such an incredible job with that opening scene in the ER, colorist Triona Farrell adding such a beautiful emotional throughline, and letterer Hassan Otsmane-Elhaou helping increase the emotional depth via each word from the characters. When we developed CRASHING, the idea of an everyday hero being at the center of this superhero universe was super appealing. Because Rose Osler does have a superpower, she saves lives. She just does it in scrubs instead of a mask and uses anesthetic to knock out super villains rather than a magical hammer. For me, the last two and a half years we’ve been surrounded by heroes in hospitals. We’ve seen their struggles, triumphs, and witnessed the trauma they’ve endured caring for an entire civilization during this pandemic. I wanted to tell the story of someone who’s pushed past her breaking point during an overwhelming conflict. Rose Osler fits that bill.

CW: This story is one of the most creative in comics, I really can’t think of anything like it. What was the process like coming up with such an spectacular idea?

MK: You’re incredibly kind and I thank you for that compliment. The germ of the idea really started watching doctors and nurses going on social media to express what they were experiencing daily in hospitals all over the country during the pandemic. You could see how burned out and traumatized they were getting the longer everything went on. I was seeing stories from doctors talking about how they’d be having panic attacks in the parking lot before their shifts every day. Then those attacks would pass, they’d find a way to get out of their car and start another twelve-hour shift. I thought it was inspiring. I thought it was heroic. I wanted to honor someone like that, who is caught in something extraordinarily difficult, that pushes them beyond their limits, and must figure out how to survive. Then I dressed it up with superheroes and super villains because that felt like a great translation. In essence the original idea was taking the medical drama of Nurse Jackie with a procedural like Gotham Central.  From there I got to our editor, Heather Antos, whom I love working with and love as a human being. Heather and I worked together at Valiant Entertainment for a couple of years, and she got familiar with my playwrighting, I even directed a short play she wrote for a reading series I produced. So, Heather and I had a rapport and I trusted her to make me a better writer and make this pitch the best it could be. From there we linked up with Morgan Beem via Ryan Cady, who I became friends with when I was working at Forbidden Planet in NYC, and we built this pitch that we all really believed in.

CW: You have some amazing artists working on your covers (as well as the series itself). Did you have a say on who was hired to do these beautiful covers?

MK: For the main covers it was always going to be Morgan. I’m a big believer in the interior artist doing the main covers of a series. And so is Heather. I think it’s important for art on the cover to reflect the reading experience you’ll get on the interiors. So, either it’s the main interior artist or it should be someone with a similar style. For the variant covers, Morgan and I submitted a list of folks, Heather put together her list, and from there Heather went on to book just a fantastic line up of talent. I’m blown away by these covers. Our email threads are essentially just all of us gushing. 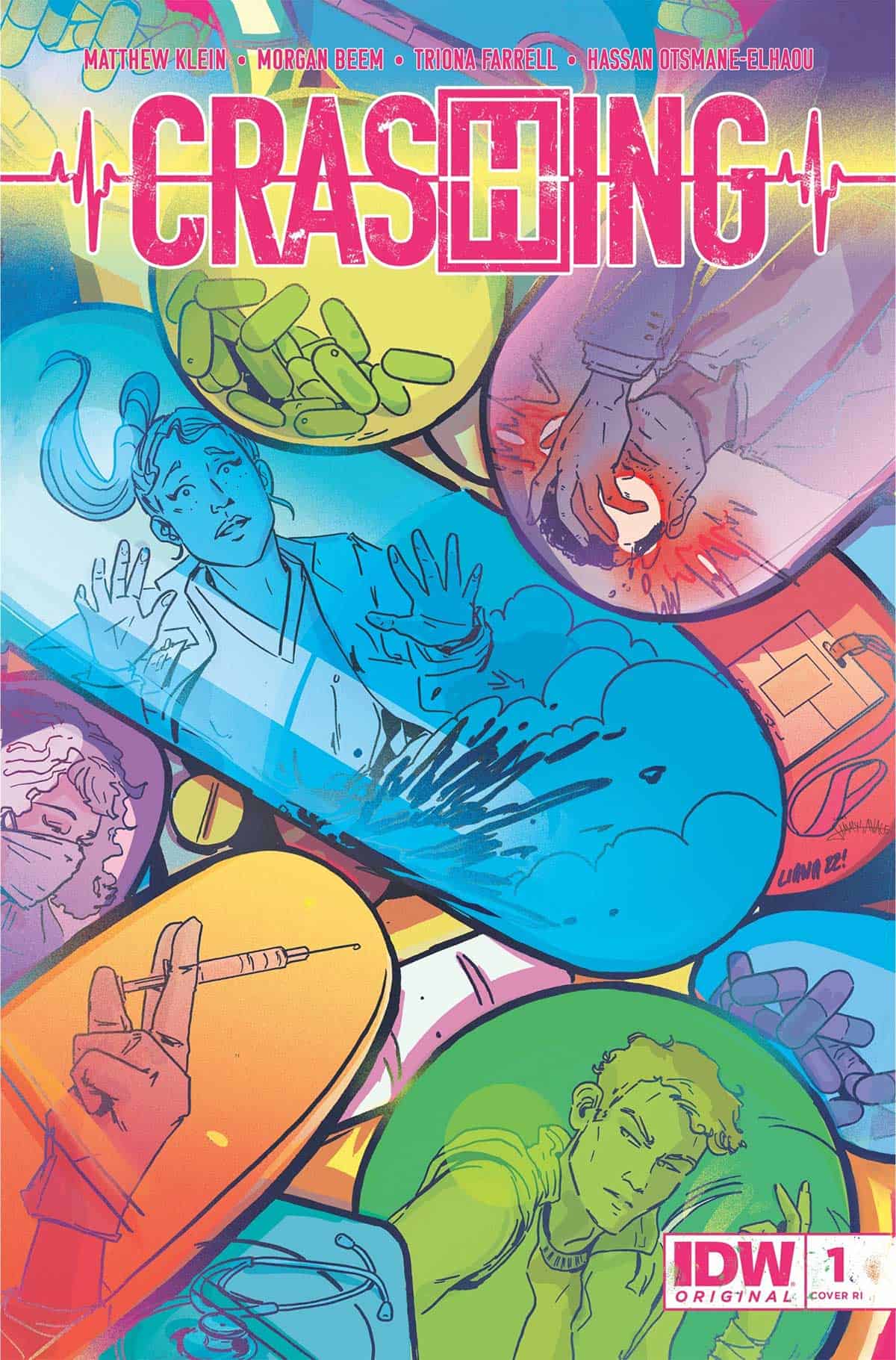 CW: One of the big plot points in this story is the main character’s addiction. What made you include such a deep point to her character?

MK: Addiction is something I’m familiar with. My mother’s a licensed addictions counselor for forty-two years. My family’s had a history of alcoholism, there’s definitely some addictive traits and traces in me. I’ve kept up with addiction therapies, treatments, and always been fascinated by the research. And addiction is prevalent in our society right now. Last year there were a hundred and eight thousand deaths by overdose. More than any year since they’ve been recording them. It’s an issue that’s touching every community. To examine a character like Rose who’s obsessed with saving everyone, it’s a question of what that internal struggle is. What’s her actual personal arc going to be? What is on the line for her? Being an addict and being pushed to the precipice of relapsing was a natural fit for her personality. She’s obsessed, ambitious, highly focused, and as a surgeon she’s willing to go beyond the limits of your average person. Except the flipside is that she’s reckless, manipulative, arrogant, and she’s convinced herself that saving everyone else’s life is more important than taking care of herself.

CW: I hear a lot of talk of this series being compared to shows like Nurse Jacky and House, but with powers. Does it feel real to be compared to such popular shows?

MK: I love it. It’s such an honor to be compared to those incredible character-driven odysseys. Like those shows, this is a story of an addict who needs to learn self-care, forgiveness, but she’s driven by a compulsion that means everyone else’s needs come first. What happens when someone with a savior complex is forced to save herself? 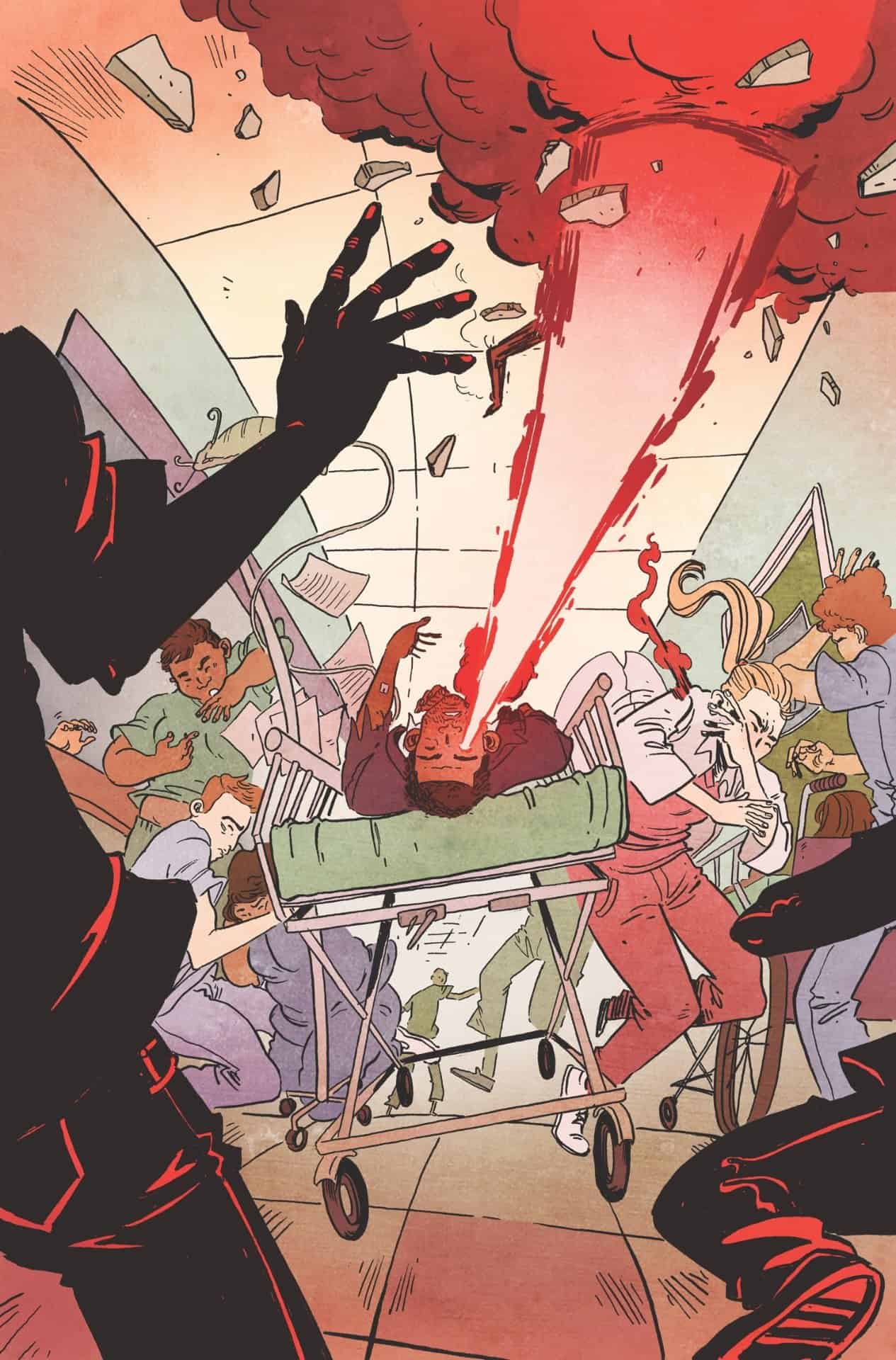 CW: How did you end up at IDW? Did you shop around for other companies?

MK: CRASHING ended up at IDW solely because of Heather. While we were working on the pitch she got hired there. Then, one day she said, “This is good enough for me to pitch it to IDW, would you be interested?” I was thinking maybe I’d have to crowdfund issue one and I was looking at a few other potential homes. But the timing was right because IDW was developing their IDW Originals slate. This just fit perfectly into their plans, and they’ve really gotten behind us.

CW: You started in this industry kind of working in the background. Any advice for people like you looking to finally get a story published?

MK: Don’t be a dick. To quote the immortal words of my editor. Build bridges, be professional and kind to everyone you work with, no matter what capacity you deal with them. If you treat everyone with respect, be punctual with your work, and be a supportive voice in the comics community then when the time comes someone will be willing to go to bat for you. The other thing I’d say is… make comics! When I was Vice President of Sales and Marketing at Valiant, I’d meet tons of people at cons and they’d all ask how to break in. I’d say the same thing: Make a comic. Make a webcomic. Make an Instagram comic. Just make something to show people. If someone said to me, “I’m a writer” then the first thing I asked was, “What have you written or working on?” And if they say, “I have this idea” then that’s as far as I’ll go. Make stuff. It’s never been more feasible for folks out there to make something to show people, people who you want to buy into you. Because that’s the thing, publishers aren’t just putting resources into a concept, they’re investing in the talent. They’re putting their faith that the talent is going to be professional to deal with, hit their deadlines, not have a big ego and make their lives harder, and will get out there to promote the work once it’s announced. So, don’t be a dick. And make comics. CW: Lastly, I just want to say I’m absolutely in love with this series so far (writing, art and all). Will this have a potential to grow into more miniseries, or do you have an ending all planned out?

MK: We’re not making this expecting a second arc. We’re making this with a definitive ending in mind. That being said, if the series sells well enough then hopefully IDW would be interested in another run. We’ve got a ton of stories to tell and people to meet in this world Rose is taking us through. We could follow Rose and other characters for years’ worth of adventures if we get to that point.

CW: Thanks again for taking the time to do an interview with me! I’m so looking forward to people getting their hands on this comic!

MK: Completely my privilege to do this with you and I cannot adequately express my gratitude for your support. If you like issue one…just you wait. Thanks again to Matthew and IDW! The final cut off date for preorders is this week, August 15th. Issue one comes out September 21st, 2022!