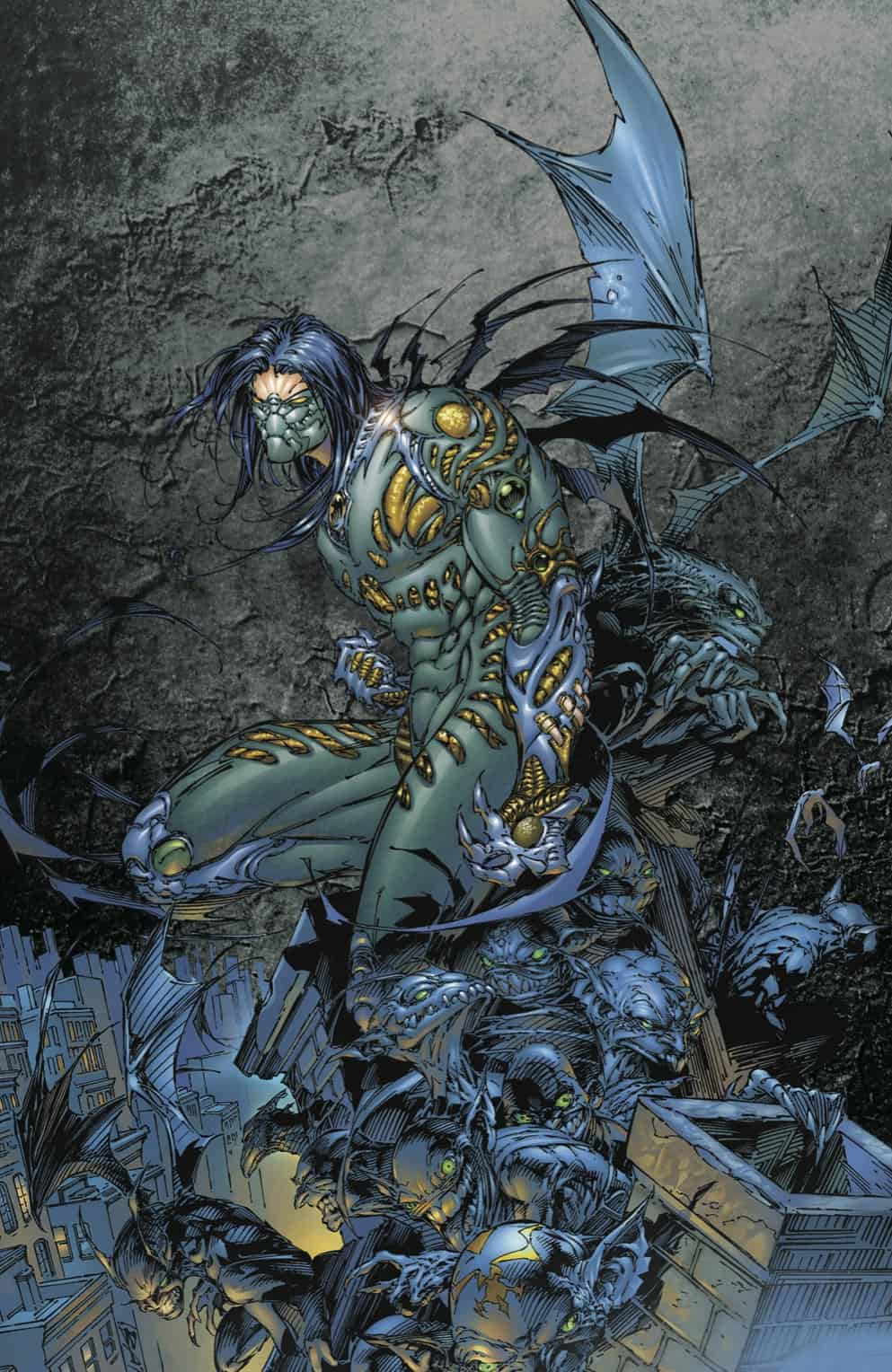 Barely a year into redefining their comic line after the massive success of Witchblade, Top Cow would introduce Jackie Estacado would headline his own solo title, The Darkness, and while the Witchblade titles would float between genres, trying to get its footing on where it belonged, Darkness would come out the gates completely aware of what it was. I think the reason why Jackie’s book would have a better understanding of what it was, rather than what it could be, came down to the fact that Marc Silvestri tapped Garth Ennis, whose writing credentials run deep in the comics world, would bring his signature nihilistic horror vibe, and deliver an opening arc that would make the book a smashing success. The Darkness concept is that there’s a primordial force in the universe that encapsulated everything until “god” decided to create light, and form the universe. The Darkness abhorred this event, and would enter into a never-ending battle between the Darkness and “god’s” light. “God” would create the Angelus, in answer to the Darkness, and the two would continue their stalemate for centuries, until they decided to come to a truce and through an act would combine to give birth to the Witchblade. 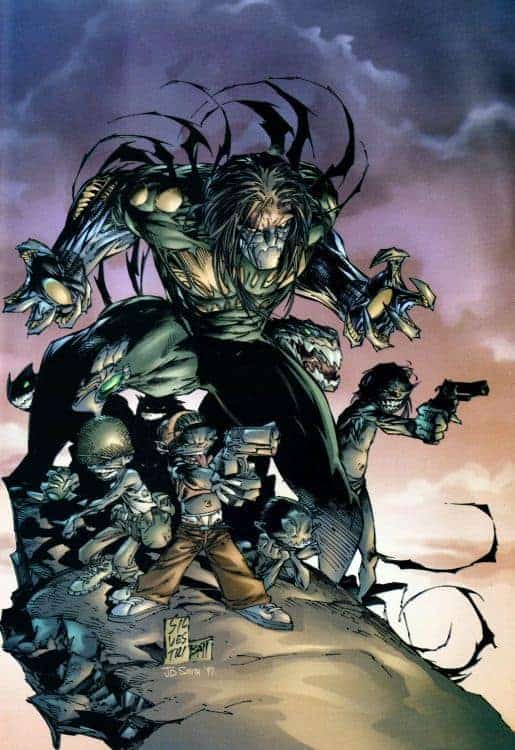 Their truce wouldn’t last long, and each force would take on hosts that would continue their battles on the earthly plain. While the Angelus could transfer its power to anyone who wore the horned crown, the Darkness would be passed on from father to his child at the moment of conception, where his life, and the power of the Darkness to its child, who would then ascend to power on his 21st birthday. In four issues you’d get a classic Ennis comic, full of his patented irreverent humor, lots of swear words, and a bastard that you’re unsure if you should root for him, or against him, but it’s a lot of fun to read. The book did so well that it garnered a spin-off title, Tales of the Darkness, but much like the Witchblade companion title, it didn’t last as long as expected. None of the characters created by Ennis and Silverstri are sympathetic during this run, but this book proved they didn’t need to be. The Darkness, much like Witchblade, would continue on their paths by various other creative teams, creating other characters and artifact wielders along the way, but for all of the success of the two titles, their other titles wouldn’t seem to catch the world by storm. Sure, there were exceptions, like J. Michael Straczynski’s Rising Stars [editor’s note – you bet you sweet bippy we’re covering Rising Stars for a future Image30 chapter soon!], but thanks to issues over ownership, Top Cow would lose the JMS-penned books, as well as Michael Turner’s Fathom [this too! – ed.]. This blow took the wind out of the studio, but Silvestri wouldn’t let this get to him. After a rocky run by Scott Lobdell, Silvestri would seek out Paul Jenkins, who would take over the Witchblade book, as well as resurrect and relaunch the Darkness title, with comic veteran Dale Keown (Incredible Hulk, Pitt), and given free reign to do whatever they liked. Jenkins and Keown’s run would prove to be such a success, that lead to crossovers with both Marvel & DC Comics, as well as get optioned for a feature film at Dimension Films in 2008. Unfortunately the film would end up in creative limbo, despite being touted at the San Diego Comic-Con in 2009. 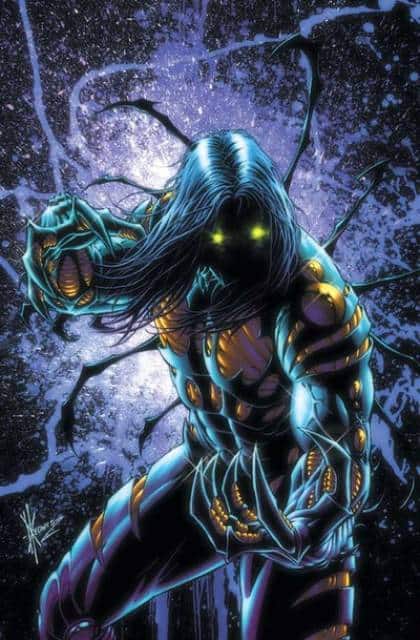 Unfortunately, like the first volume of the title, the second volume by Jenkins would end up cancelled, but Jackie and the Darkness wouldn’t disappear or die. In 2007 Top Cow would join forces with Starbreeze Studios, and 2K Games, and release the first out of two related video games, which would prove to be large successes for all of the companies involved. With the video games success, Marc would push for the Darkness’s greater presence in the Top Cow universe. Enter comic writer veteran, Ron Marz, of Green Lantern and Silver Surfer fame, would take over the Witchblade title, and was determined to incorporate and enrich the Darkness and Witchblade’s mythologies into the Top Cow universe, resulting in one of the most comprehensive shared universes in comic companies that weren’t a part of the Big Two. Bringing Jackie and Sara together, Marz would throw in a wrench that would become a catalyst for change with the birth of the child, Hope. Hope was the child of Jackie and Sara, but the Darkness had possessed an unconscious Jackie to create Hope, so Jackie didn’t die due to the pregnancy. This threw a huge wrench into the power structure between the Darkness and the Angelus, and almost brought all of the powers of Heaven down on Jackie, Sara, and the allies to destroy the child, but instead would up crowning a new Angelus host, former Witchblade bearer, Danielle Baptiste. 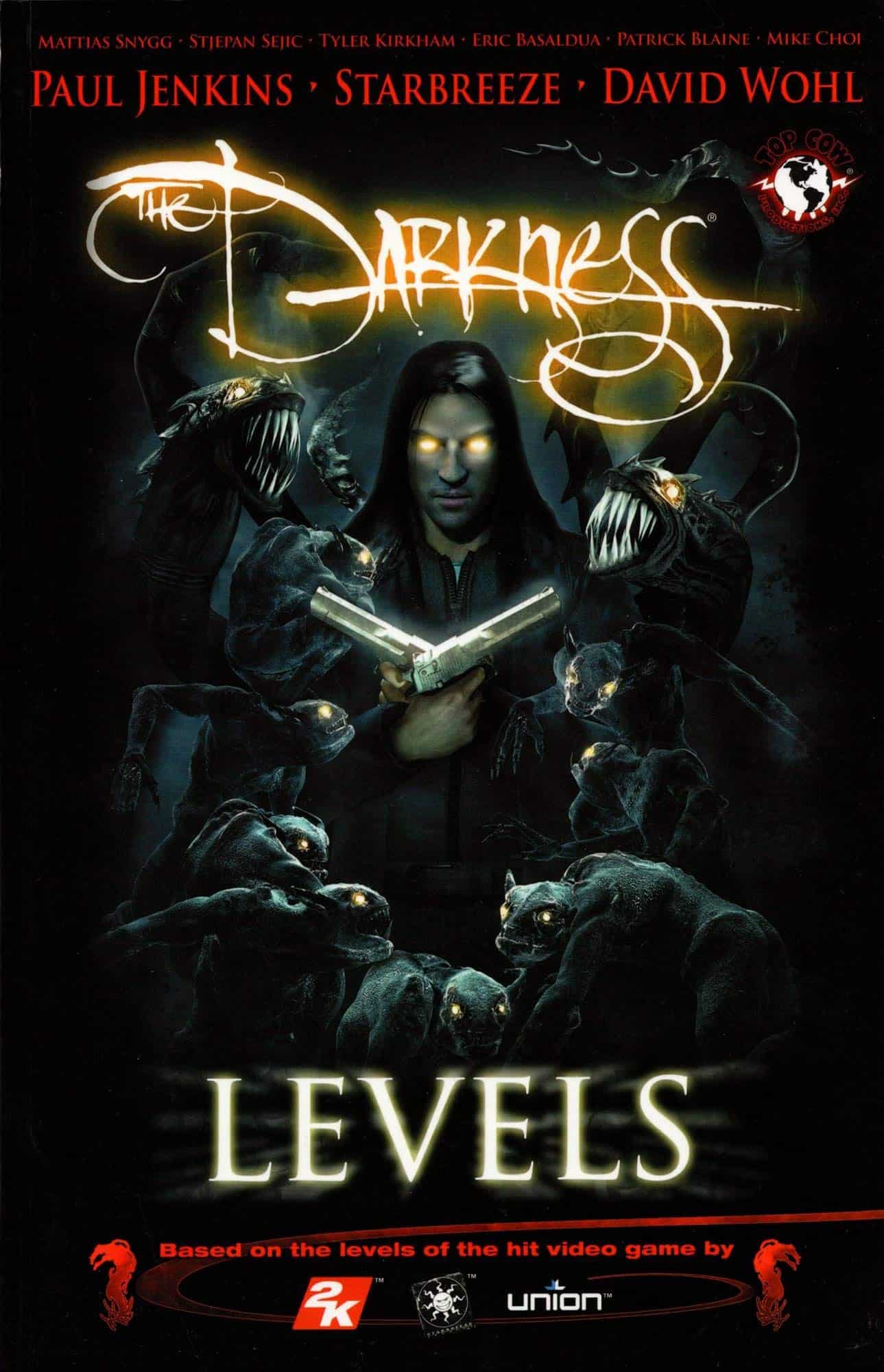 Enter: Phil Hester and Michael Broussard. Hester, had been in the comic community for decades, as both writer and artist, who had a very celebrated run on Green Arrow for DC, with before moving on to creator owned work, the first, Firebreather for Image Comics, was tapped to pen a new volume of Jackie’s adventures. With Hester would come comic neophyte, Michael Broussard, who had zero experience, but would impress Silvestri so much, that after assisting on an one-shot for Marvel, would get the enviable task of relaunching the title, and together they’d tell a story of Jackie, as well as the Darkness. Garnering high praise from the comic world, the duo, along with Marz’s work on Witchblade, as well as the rest of the Universe’s Artifacts wielders, were building up to what would be the biggest event to shake up and change the Darkness’s status quo, and lead the series into the Artifacts event. 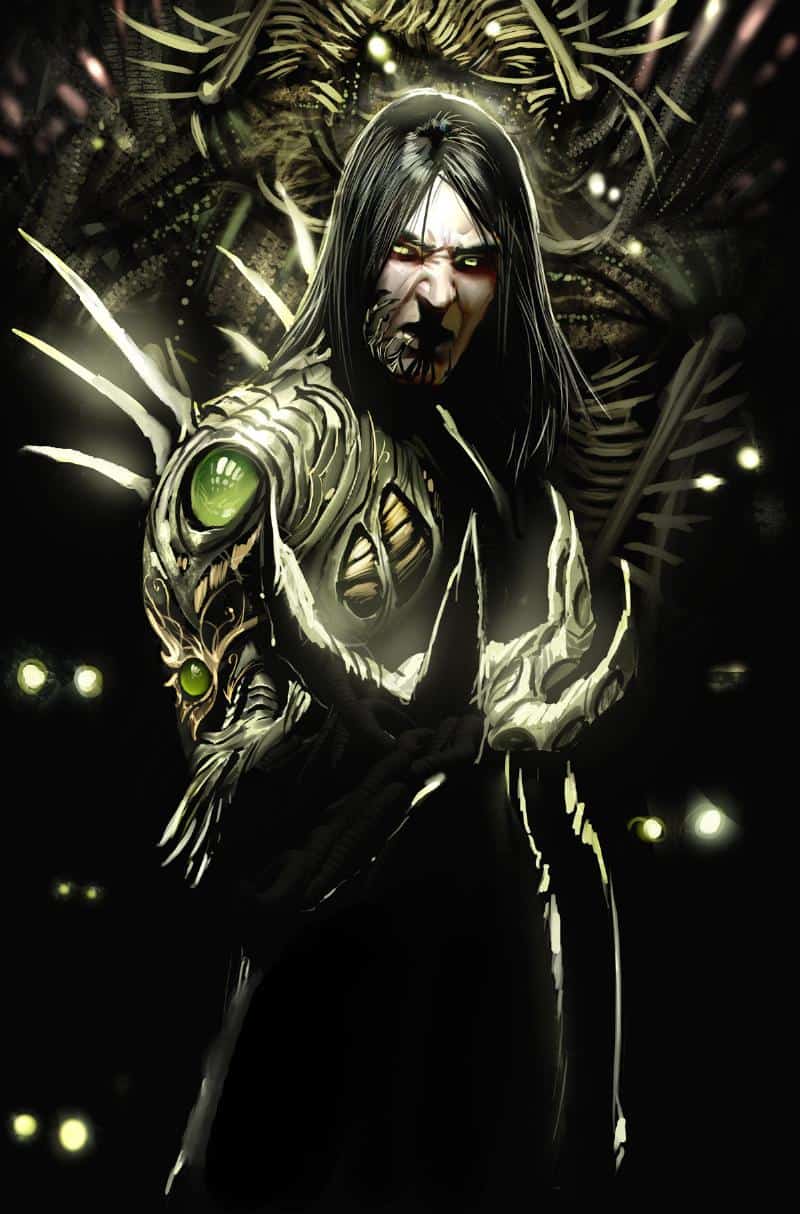 The Artifacts series was a 13 issue maxi, that was later changed into an ongoing, where the artifacts and their bearers fought against the manipulative Curator, and each other, trying to bring an end to the current universe, and create a new one. Jackie stayed true to form, and absorbed the power needed, and created a world to his liking. The move was a soft reboot, where Marc Silvestri and Matt Hawkins gave a total makeover for the CyberForce and Aphrodite IX titles. In this new world, comic veteran David Hine and newcomer artist Jeremy Haun to redefine Jackie. Jackie would be reunited with his long dead first love, Jenny, where they were the parents of Hope, who also had connections to the Darkness. The series would go on for a couple years, before being finally cancelled. Languishing in comic limbo hell, Jackie, Sara, and the rest of the Artifact bearers would fail to see print until the mini Image United, that involved all of the Image Comics founders coming together to draw their own characters until Rob Liefeld lost the rights to many of his creations due to a financing deal with a former partner he signed up with after leaving Image in the mid 90’s, so there’s little hope of seeing this mini finished. 2022 marks the 25th anniversary of Jackie, and the Darkness, and Marc Silvestri has been crowdfunding a new volume of the Darkness omnibus with the promise of new Darkness material by Silvestri, but no word on when fans can expect to see it. Here’s hoping we’ll finally get it, and new material for Jackie, Sara, and the rest of the Top Cow universe soon.

NEXT: Yeah, Battle Chasers was supposed to be the next big thing, but 1998 had much, much more shock and awe in store for Image, as Jim Lee packed up WildStorm and booked it to DC.