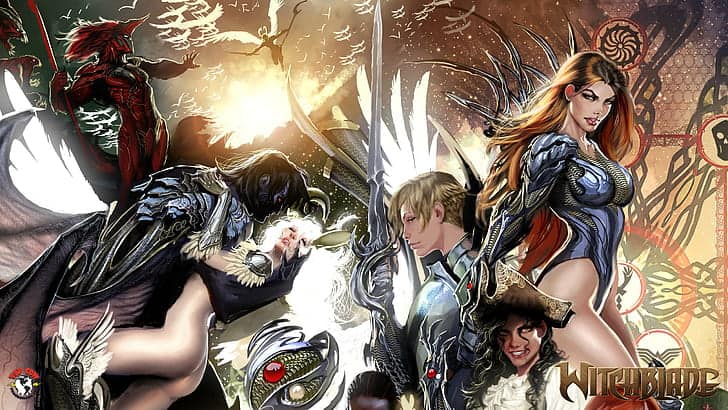 1995 was quickly coming to a close, Image Comics was three years on the scene, and had already established itself as a force to be reckoned with in the publishing world. Marc Silvestri’s Top Cow imprint was churning out the heavy sci-fi/superhero line of comics, like CyberForce, Weapon Zero, among many others, but little did the comics world know, Top Cow was about to set the comics world on fire with a relative artist newcomer, and a character that would become the face of the imprint for decades to come. Image co-founder and head of the Top Cow imprint Marc Silvestri, would join with industry veterans David Wohl, Brian Haberlin, and artist neophyte, Michael Turner, and launch the biggest female solo from independent comic publishers of all time: Witchblade. When the title was first introduced, the industry was definitely riding the high on the “bad girl” comics fad, like Lady Death, Vampirella, Shi, and more, and cranked it up to eleven. The book would eventually launch a spinoff title, Tales of the Witchblade, then The Darkness (a character that will be discussed in an upcoming article) while making Turner an artistic supernova, with every major label trying to snag him. 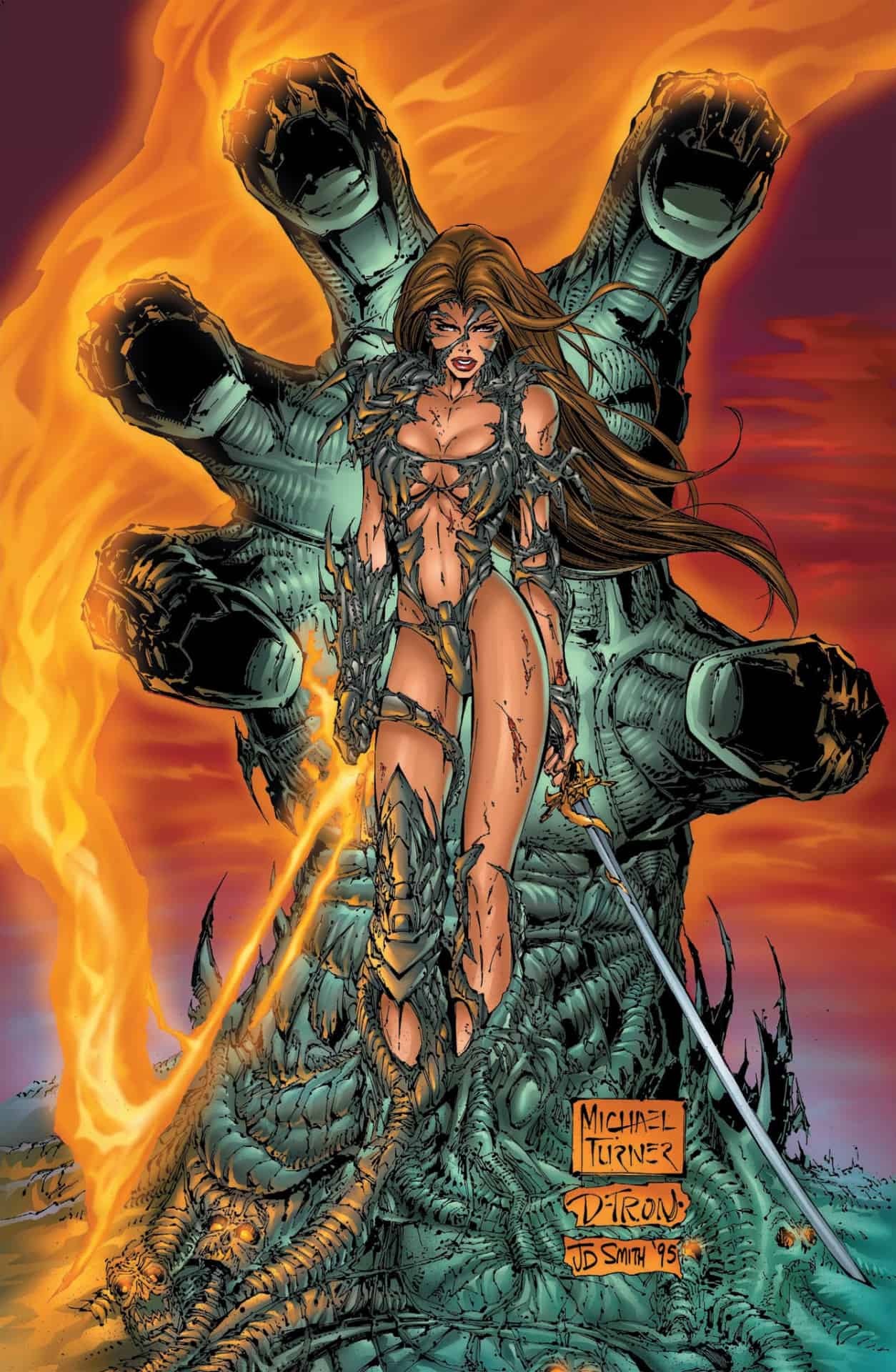 Witchblade would follow Sara Pezzini and her world, and float the lines between fantasy/horror, straight-up superheroics, and a dash of gritty noir, not really knowing what to do with itself in the beginning. Wohl would play up the glamour aspect of the title, by dropping the names of hot designers, and included shout-outs like Bono and Sting, two very prolific and popular artists from this era, while Turner would dress everyone as if they were a character playing in one of the seminal 90s dramas (see: Sex and the City, Melrose Place, Ally McBeal, etc.), all very chic and on-the-nose for the era. Especially Kenneth Irons, and his valet, Ian Nottingham, who would become quite influential in the book during its formative years. Unfortunately the team didn’t really know who Sara, or the Witchblade, were in the beginning. Despite being a seasoned detective, Sara was easily misled, and mentally abused by series villain, Kenneth Irons. Besides Irons, who was unfortunately the most interesting villain from those early days, Wohl and Z would continue to roll out these rather uninteresting villains, like stereotypical Italian mafia families, stereotypical Japanese Yakuza, and a stereotypical serial killer who targeted young, aspiring models. As Sara’s star rose, so too did the more mystical titles Top Cow would give us, like the aforementioned Darkness, Ascension, and so on, each with varying levels of success, but other than The Darkness, these early titles didn’t seem to catch on with fans. 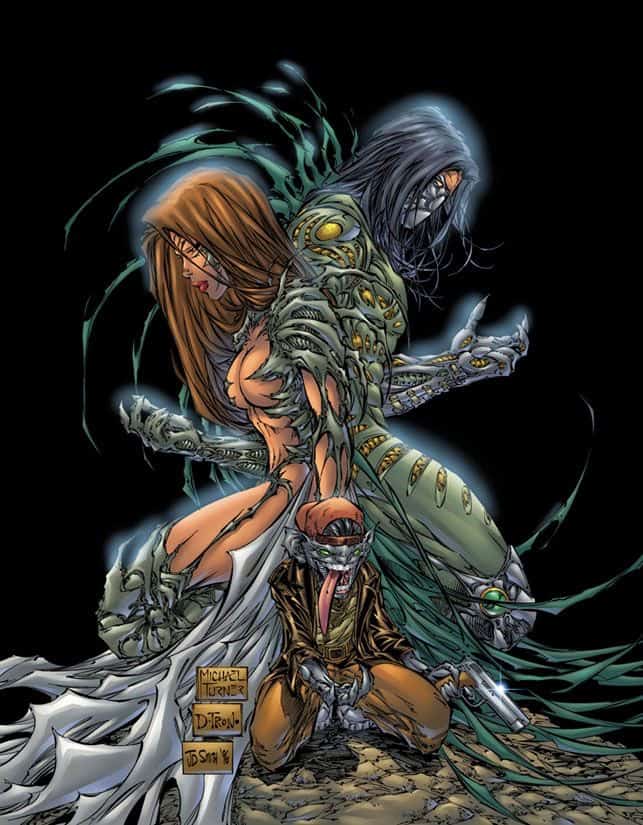 It’d take Silvestri snagging Paul Jenkins, who had written horror-tinged superhero comics for years at various publishers, to steer the Cow’s top two franchises to get Witchblade truly on track. And that vote of confidence showed how much faith the imprint had into cultivating the Witchblade property into becoming one of Image’s marquee franchises. Jenkins’ run would help solidify Top Cow’s transformation from producing sci-fi superheroes, and firmly entrench it into becoming the premiere imprint to read high-concept fantasy and horror comics in a shared universe – with the highest-quality digital coloring around. After Jenkins’ departure, Wohl would come back to the title, bringing many of the familiar elements that he cultivated from his original run with varying degrees of success, but where these two visionary writers would begin, the title would come fully into its own when Ron Marz, of Green Lantern fame, took the authorial reins. 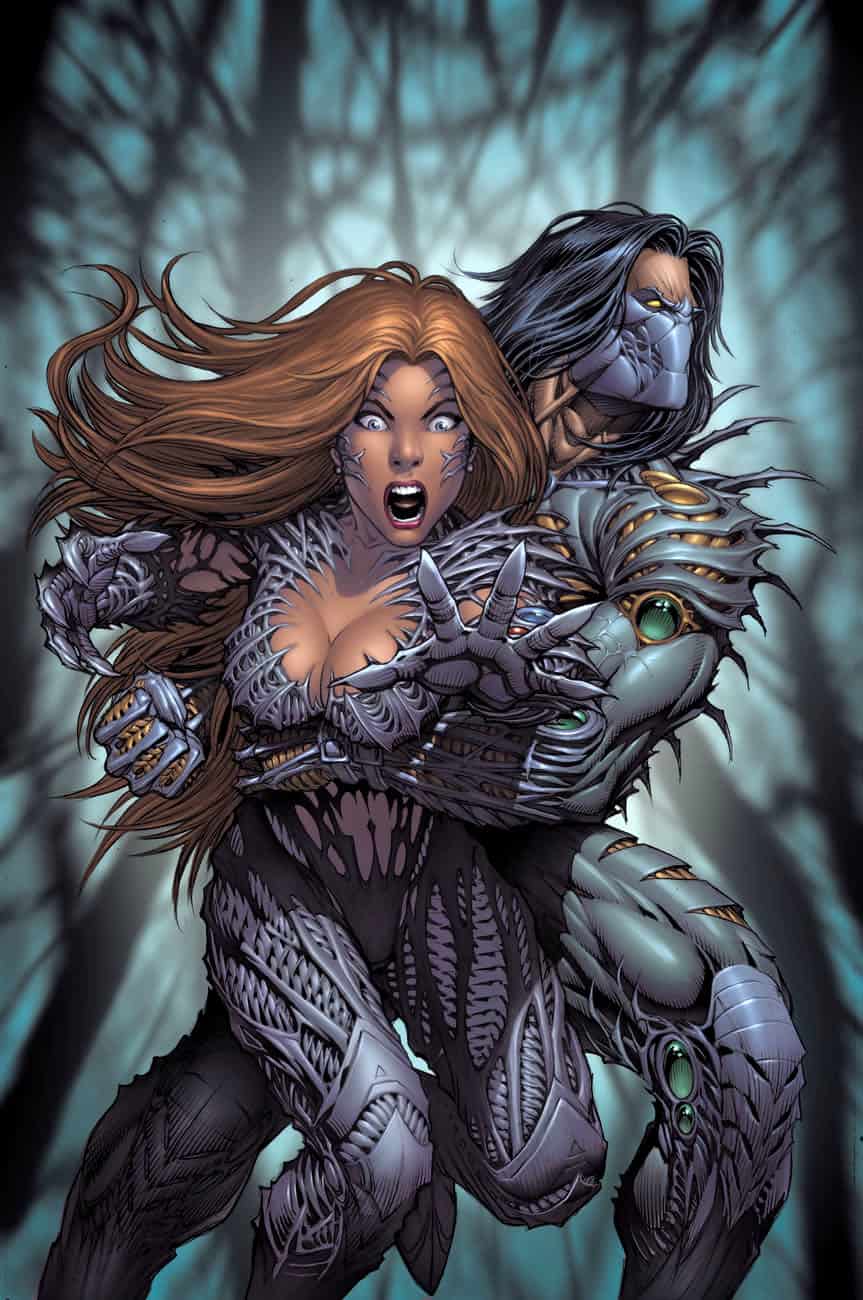 Marz was no stranger to world-building, with much lauded runs on Green Lantern, Silver Surfer, and would go on to be one of the co-creators of the CrossGen universe. With Marz coming aboard, he decided to revamp Sara’s world, introducing a mystical guide to the Artifacts, and make it more than just the 90’s bad girl title, with the Witchblade becoming more than a metal bikini with a quasi-mystical gauntlet into actual, functional armor. Marz and his artistic cohorts turned Sara’s world and the rest of the Top Cow’s universe upside down. Tying things like Tom Judge and his artifact, the Rapture, the Angelus, and other characters and items into it broadened the scope of the book, developed a stronger sense of history, and dramatically increased the stakes. Marz would again  elevate the book when artist Stjepan Sejic joined him, and the team would create a comic that would look like nothing else like it. Sejic’s digital painting technique made the book look realistic, yet would portray the fantastic elements as otherworldly and mythical. 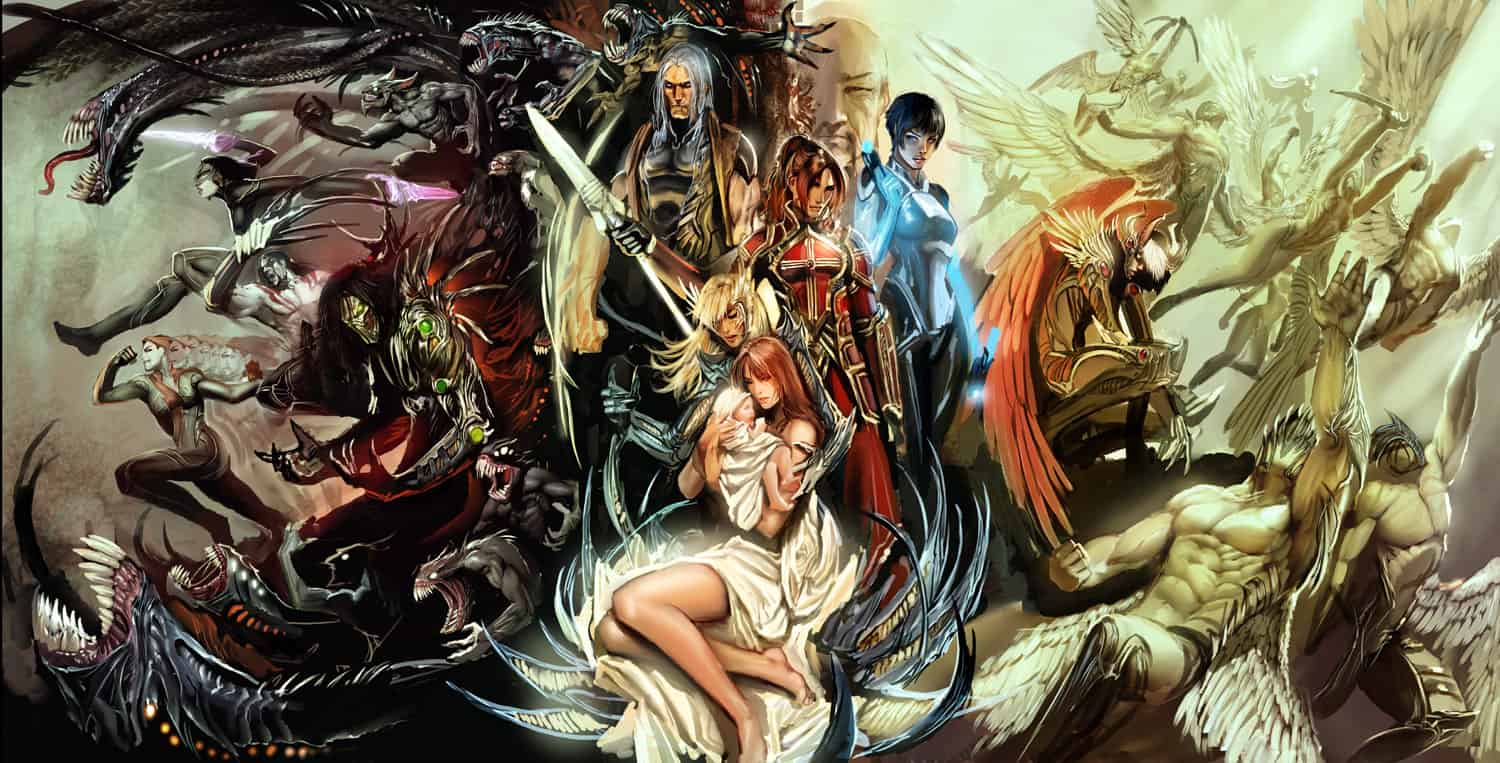 Creating the Artifacts was just the first part of Marz’s plans: he’d also introduce characters like Danielle Baptiste, a character that would become a very crucial part of not just this book, but the entire universe as well. She would become a bearer of one-half of the Witchblade, that would have bigger ramifications throughout the Top Cow universe, involving the Witchblade bearers, the Darkness, the Magdalena, and the Angelus, which would culminate in the birth of Hope, daughter of Sara and Jackie, the Darkness-bearer, tipping the balance between the light (the Angelus), and the dark (Darkness). This event would help to lead the rest of the Top Cow toward the Artifacts event that would give the universe a soft-reboot. And with that, the 20th century became the 21st, and Witchblade and its world became Top Cow’s official cornerstone, leaving CyberForce behind in the ’90s.

But a mere eight months after Witchblade‘s auspicious debut in October 1995, something seismic happened: in June the following year, Marc Silvestri announced he was leaving Image, and taking Top Cow with him. Hushed whispers swirled about the industry, and everyone had their suspicions as to why: friction at the top with one of the other founders. And although no one would outright confirm it, Rob Liefeld was the top rumored choice: Image’s resident bad boy had supposedly burned a lot of bridges, up to and including allegations that he hadn’t paid for work commissioned, and was proving to be unreliable in general for the rest. Executive Director Larry Marder would only comment that Liefeld was “Making business decisions that were counterproductive to being a business partner,” and offered no further details.

For one brief, shining moment, Top Cow was a wholly independent entity.

Later that same month, Liefeld pulled all of his Extreme imprint titles, including Youngblood, to his independent imprint Maximum Press, citing them as superior to Image. By early August, two separate and unanimous votes to oust Liefeld were taken by the Image board of directors. And by October 1996, Silvestri and Top Cow were back in. No one at the time would actively confirm that Liefeld was the reason Silvestri left, but the circumstantial evidence seemed clear. Silvestri, still a shareholder in Image, was present for the second vote, but the game was already set: absent in person, Liefeld tendered his resignation from Image via fax and went on to start his own company, Awesome Comics. Two conflicting announcements were issued almost simultaneously: from Image, that Liefeld had been fired; from Liefeld, that he had resigned. Not even five years in existence, and Image had not-so-amicably parted ways with one of its key founders, and for better or worse, the most outspoken face of the company. 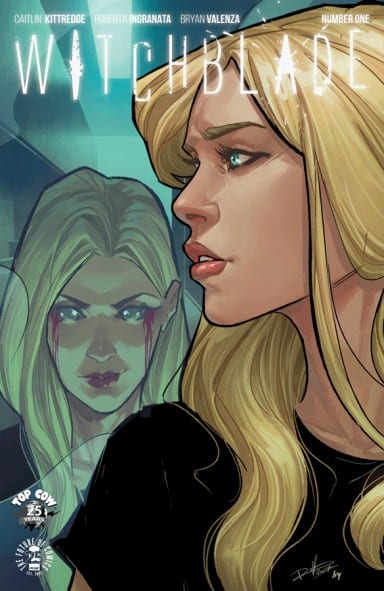 Throughout all that, though, Witchblade persisted under Marz’ stewardship, reaching crescendo with the Artifacts event, that lead to a soft reboot of the entire Top Cow universe. After that reboot, new creators Tim Seeley and Diego Bernard would take over the title, and while they were giving us really good stories, they just didn’t click with the fandom for whatever reason. After their truncated run, Marz would return to the book with Laura Braga on art duties, lasting on the book for another fifteen issues. While he tried to recapture the same magic, it was the death knell for the book, and the rest of the Artifacts universe. Times had changed, and what fans were looking for from their comics had, too. Despite all of the progression the title and character had seen, it just wasn’t enough to save Witchblade from the perception that it was an anachronism from a bygone era.

Two years later, Top Cow would try to start fresh with a new volume written by Caitlin Kitridge, and art by Roberta Ingranata. This book would starnew character Alex Underwood, who would become the new bearer, and would find herself thrust into a world of magic and terror. Ingranata’s design for the Witchblade armor would be inspired by the later look that Marz would have a hand in creating. That volume would last eighteen issues before coming to an end as well. Will we ever see Sara again? I honestly hope so. It would be a shame to never read another series featuring the longest-running female-led solo title by an independent comic publisher.

Next: Apropos of absolutely nothing, Alan Moore wrote the perfect Superman comic with SUPREME!