We all have characters who make us warm or squee inside. It is po-face respectable to pretend we don’t, that it is actors playing roles or that we do not ever think of a prose or comics fiction that way. But everyone has their moment, that character. Or, many, many, many.

I was upset, as a child, when Chris Claremont seemed to de-queer Lindsay McCabe in Spider-Woman. Lindsay was the first woman who was not put off by the title heroine’s superb pheromones that, in general, turned on men and upset women. She liked Jessica, the Spider-Woman, and Jessica raved at being able to open to her, to trust her, share in ways she could not share with men. 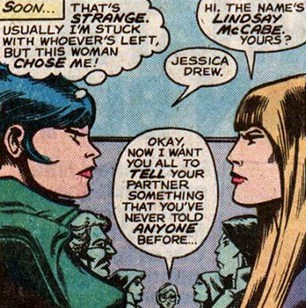 As a child, as today, this thrilled me with a delicate, persistent energy. And, Chris Claremont (or, with adult eyes, maybe an editor, maybe nobody) took it away!

Instead, Lindsay McCabe was positioned as a lush, a fun and slapstick alcoholic. Because that’s what gay may be. Some alcoholic accident. (You can see how judgmental I was being, and also how this stung.)

I simultaneously learned to distrust anyone, especially an older teen or adult, who held onto Kitty Pryde, of Uncanny X-Men and Excalibur, as what I started to call, even then, their paper girlfriend.

Paper girlfriend is different than crushing on a fiction, or even lust for a fictional character. There is a possessiveness, but there is also a sense of 2-dimensionality. The paper girlfriend is not merely printed on paper, she is paper-thin and meant to be held, rolled up and put in your back pocket; collected.

There are paper boyfriends, too, and paper enby lust objects.

What bothered me, ultimately, with Lindsay McCabe’s alteration, is that it took away her in-story control, her choice in things. By her X-Men appearances, she is a giggly falling down drunk. She stops making decisions and just follows along until one day, outside of a Mark Gruenwald short, she disappears completely.

A fictional character is always manufactured. 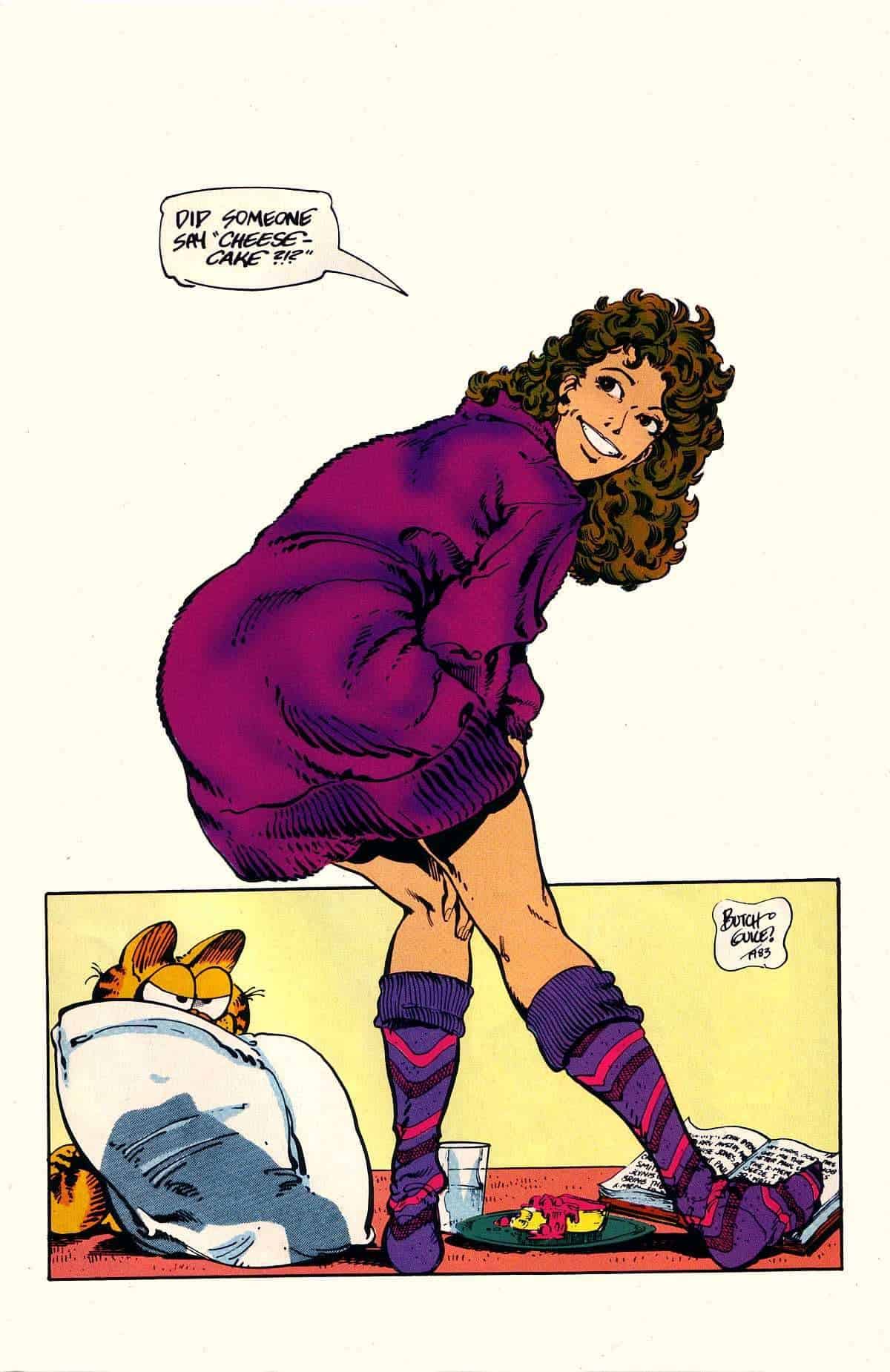 Fifteen years ago, even fifteen days ago, I could take stock of Lindsay and Kitty differently than I did, as a child, in the 1980s. Joss Whedon and John Cassaday’s Kitty Pryde is one of purified paper girlfriend. The seasoned veteran combatant and trained ninja who goes, “I’m not a fighter,” and only ever gets huffy. Who sees the not-dead ex-boyfriend who binned them when they were a teenager and later beat their current lover into a wheelchair and falls over in love because it is just meant to be. Lindsay McCabe just no longer appears so much, but when she does, she’s smiles and energy and on her own two feet.

Lindsay can stand without Spider-Woman, but no longer makes appearances.

Kitty, being made to phase through the bed while on it with Colossus; all I can think is, “His little sister made her phase through a bed first.” “Oh my God! I phased!” says Kitty Pryde and, Kitty, dear, you phase every day. It’s your power and something that happens every time you lose focus. I’ve seen Kitty accidentally phase while eating fried eggs.

This is not anti-Colossus, any more than it I am agains Spider-Woman, Colossus’ sister, or the myriad lovers of an Annie Fanny or Wendy Whitebread. Colossus, in this, is the reader and the writer. All the consenting and encouraging voices are some assumed fan us, in union, without evidence or followthrough, and that is what makes Kitty, in these, our safe, tamped down girl who would date us. “Tee hee,” says Whedon’s paper girl. “That’s never… it was totally your fault.”

To love a fictional character, or to lust for them, or to enjoy a side by side frisson of warm feelings, is a surrender that is safely controllable but still external from yourself. Alan Moore and Kevin O’Neill turn their Black Dossier on this axis, in the end explicitly via a sex/love/comfort lens.

Not to be too Freudian or exaggerate any innate immaturity in dear reader you, this is a matter of comfort.

Dog Style was Modoru Motoni expanding on a very short comic she had done in college with a schoolmate.

The iconic beautiful woman look, of many Leiji Matsumoto characters, but purest as Maetel (iconic guide and romantically/sexually/motherly safe confidante and travel companion), was discovered by Matsumoto, late in life, to be a subconscious recreation of one of his mother’s friends who stayed with them part of World War 2.

Maetel discomfits in almost every story, and discomforts in many.

What Modoru comes back with, strongest, in Dog Style, again and again, is that none of these are perfect boyfriends, but they are interesting attractive people. 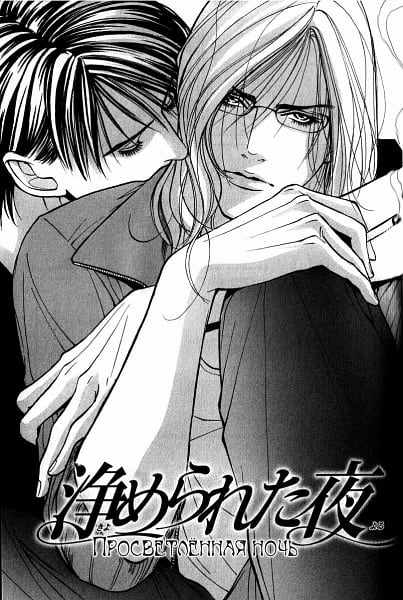 Kitty Pryde, let us remember, was named for a former classmate of John Byrne, and his most recent work with the character involves grown men grabbing the barely teenaged character and threatening to spank her (with hand-knives). His mental processes or reflections we cannot appraise, but what makes it to the pages, we can see and read.

Kitty Pryde was engineered from early on to serve as a paper girlfriend. She was built and refined for the role.

This does not imply that she cannot have other fans, or that even, other fans cannot feel warmly about her, in ways that are not paper girlfriendish. Byrne, himself, satirized the oversexualized comics figure with Kitty, at times, but also embedded her in sturdily psychosexual narratives. He and other artists (and writers) placed her in poses and scenarios that emphasized her sexual curiosity, her underwear, as well as contact by adult characters to her butt, waist, et cetera.

A collection of annotations and essays on the series refers to Robin’s boyfriend’s butt as human, in comparison to hers. She is dehumanized, then, by writer and by audience, even though, by the end of the series, the same writer and many of us responded to her as a central through-line, as a “true” protagonist of an ensemble comic.

Thompson showing us Rogue, who cannot come into physical contact with others, her top undone completely down the front, was met with the defensive defense of “It’s comics!”; the weak, “It’s their style of art,” or, “It’s all fantasy.”

So, how do I respond to that, but also embrace Jim Balent’s surreal psychosexual playfulness in his Tarot? What is the difference between Melinda Gebbie’s array of celebrated genitalia in a short conic and an artist penciling pubic hair on a page of Mighty Avengers, knowing the inker will remove it, or the writer who provides that artist with a narrative reason a male-presented, de-genitaled killer robot in a cisgender male body is, instead, appearing as an uncharacteristically naked, busty, female form he chooses to draw pubes and distinct labia on for an inker to remove before publication? 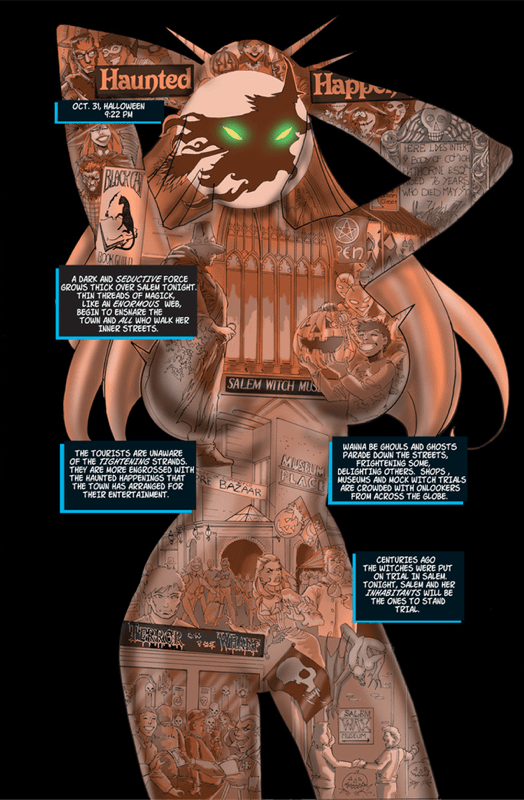 You can tell a Jim Balent page and it can tell you a lot.

Kitty Pryde tongue-in-cheek cheesecake in an all-ages comic and explicit child sex in a comic about child sexuality?

These are always uncertain things. We are always unreliable, us audiences, we authors. The comics are static, they stay as they are on each page, within each panel. But, serialization changes those, too. Serialization, the strong chance of multiple authors, multiple writers or artists, the colorists and letterers. Accommodations for commerce, the manipulative lacquer of movie adaptations or articles like this, painting something partly transparent and thick, distorting over those “static” panels. 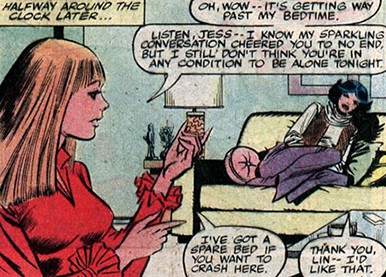