Interview with Pedro Andreo for Shadowman Issue 5: The Deadside War

I’ve been a huge fan of Shadowman for a very long time. I’ve read every issue of every series and nothing has made me more excited then the upcoming event; The Deadside War! I got an amazing chance to sit and chat with the artist of the upcoming event, that starts in Issue 5 of Shadowman!

Interview with Pedro Andreo for Shadowman Issue 5: The Deadside War:

COMIC WATCH: Pedro! Thank you so much for taking the time to do this. I’m sure Valiant is keeping you plenty busy!

PEDRO ANDREO: Thank you for having me! It’s my pleasure! 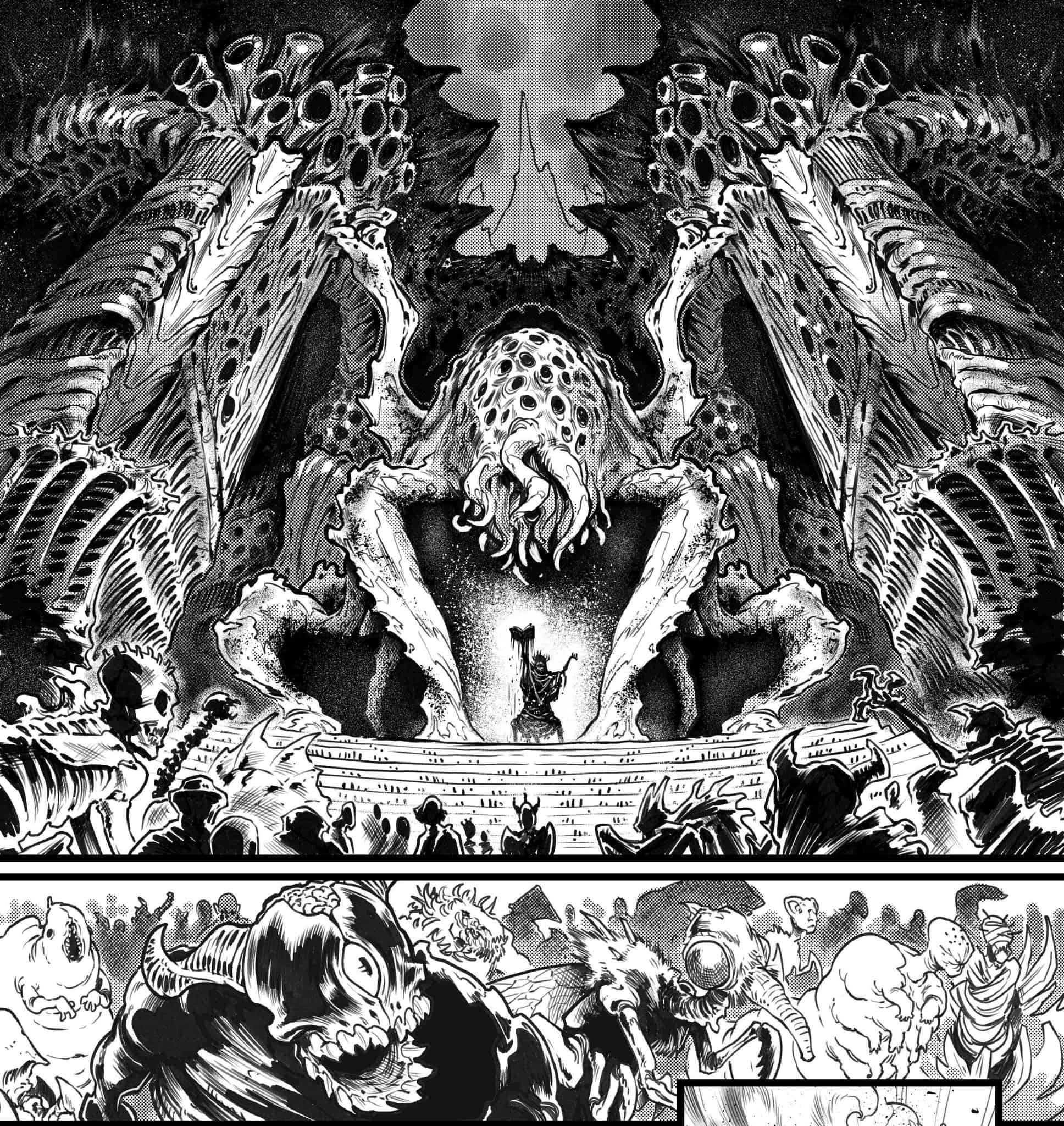 COMIC WATCH: I’m such a huge fan of your art style, and with Deadside War in SHADOWMAN #5, your art is taking a darker turn. We once spoke on Twitter about the art for Deadside and how creepy it was. You told me you weren’t a huge horror fan, so you were shocked you were this fitted for a horror title. Where do you find your inspiration for such terrifying art (if not from horror movies and stuff)?

PEDRO ANDREO: I think it comes from not being a fan of horror stuff, actually! I rarely watch horror flicks, but there’s this kind of curiosity and interest in weird or creepy stuff, although I fully know I’m gonna have a bad time later. Creepypastas from the internet, reddit threads on paranormal stuff, documentaries, podcasts..I’m super into that! I guess I prefer to imagine or know stuff instead of watch it? I have a wild imagination, that’s why I don’t fuel the horror side of it too much, but when it comes to develop visuals for a horror comic or come up with creepy art for a title as Shadowman I can give it my all! Does it makes sense?

COMIC WATCH: How much did you study up on Shadowman before joining this amazing team?

PEDRO: I’ve read some issues from the past plus the whole Jon Davis-Hunt arc, plus I’ve checked most of the previous stories and lore from other sources. I already knew the character a little and was invested in the story from the get go, but reading about all the previous work on this awesome part of the Valiant Universe has been very interesting and helpful!

COMIC WATCH: Do you and Bunn, the fantastic writer on the series, chat about Shadowman a lot? Do you have an open back and forth with him about the story and where your art can lead it?

PEDRO: A little, yes! Since English is not my mother tongue I often shy away from going lengthy with my emails or ideas, but there’s some back and forth between the whole team about the pages, characters and everything involved in this comic. I’ll make talking a lot more to my team one of my new year’s resolutions!

COMIC WATCH: If you could bring one Valiant character into this Deadside War arc (that is or isn’t in this already) who would you want to bring over? Like a dream character to add to the war or to draw?

PEDRO: I still haven’t read issues 7 and 8, so take this with a grain of salt since I don’t know who’s gonna appear later! I’d love to draw Doctor Mirage. She’s a got fit for the story, I think, plus I loved her previous runs. Other than that, I wouldn’t mind having a go at Eternal Warrior, Archer & Armstrong or the Forgotten Queen! 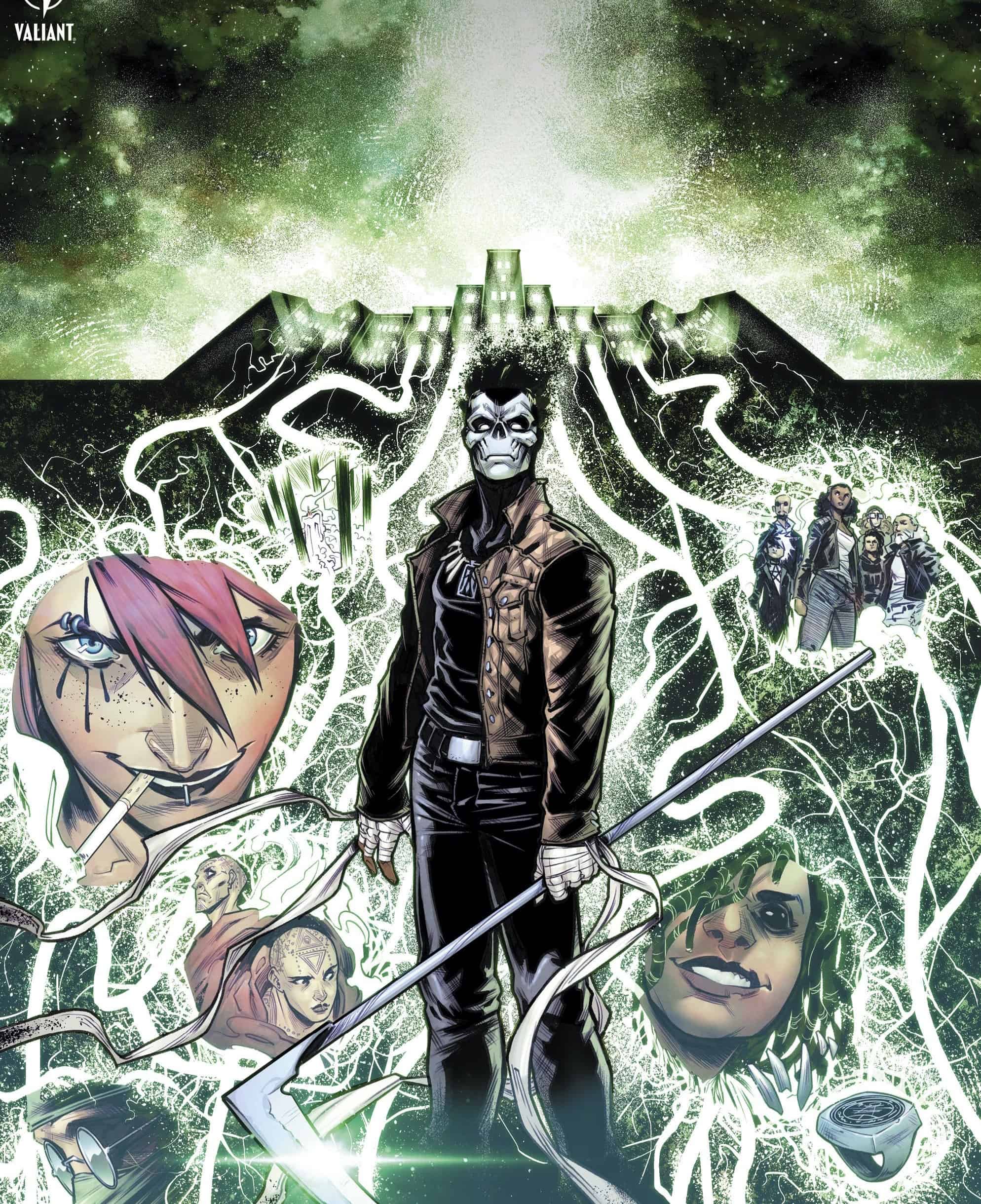 COMIC WATCH: There are some amazing music moments in issue one. We see Jack playing the sax. Do you have any music in your background, or if not, do you like Jazz?

PEDRO: I actually have a very extensive music background! Not only I love music and more often than not have music on in the background every waking hour of the day, I also play guitar, bass, ukulele and a little bit of harmonica! I would love to learn how to play the hurdygurdy too. My sister is a music teacher and my aunt is too, plus I had a band when I was a teenager. The whole deal! I think music runs in my family for sure.

COMIC WATCH: And lastly, Shadowman has a kickstarter for an amazing tabletop game Valiant: FIGHT for DEADSIDE coming soon. Do you play any tabletop games? When it comes out I want to get a Valiant talent game going to see who’s the master of The Deadside haha! I think you have a good chance with how creepy your art is, ha!

PEDRO: I CAN’T WAIT FOR IT. I’m a huge tabletop nerd, so anything boardgame or wargame is up my alley. Be it a quick filler before a meal, an evening of boardgames with friends or a long campaign of a legacy game, I’m up for it! (That reminds me that I should finish Gloomhaven before buying Kingdom Death: Monster…but the temptation! agh!)
So yeah, if you get together some Valiant peeps to play that game, count me in!

Again, thank you so much for taking the time to chat with me! Can’t wait for The Deadside War!

If you love horror, comics, superheroes or amazing art, check out the start to The Deaside War on January 19th! I want to thank Pedro for his time, and for this amazing chance to chat about my favorite superhero.

Interview with Pedro Andreo for Shadowman Issue 5: The Deadside War