Valiant’s Archer & Armstrong Forever launched this week, and Comic Watch’s Dylan Davison was fortunate enough to corral the X-Men: House of XCII writer to spill the beans over why comedy and horror are alike, why he doesn’t drink, and his revival of the classic comedic duo. 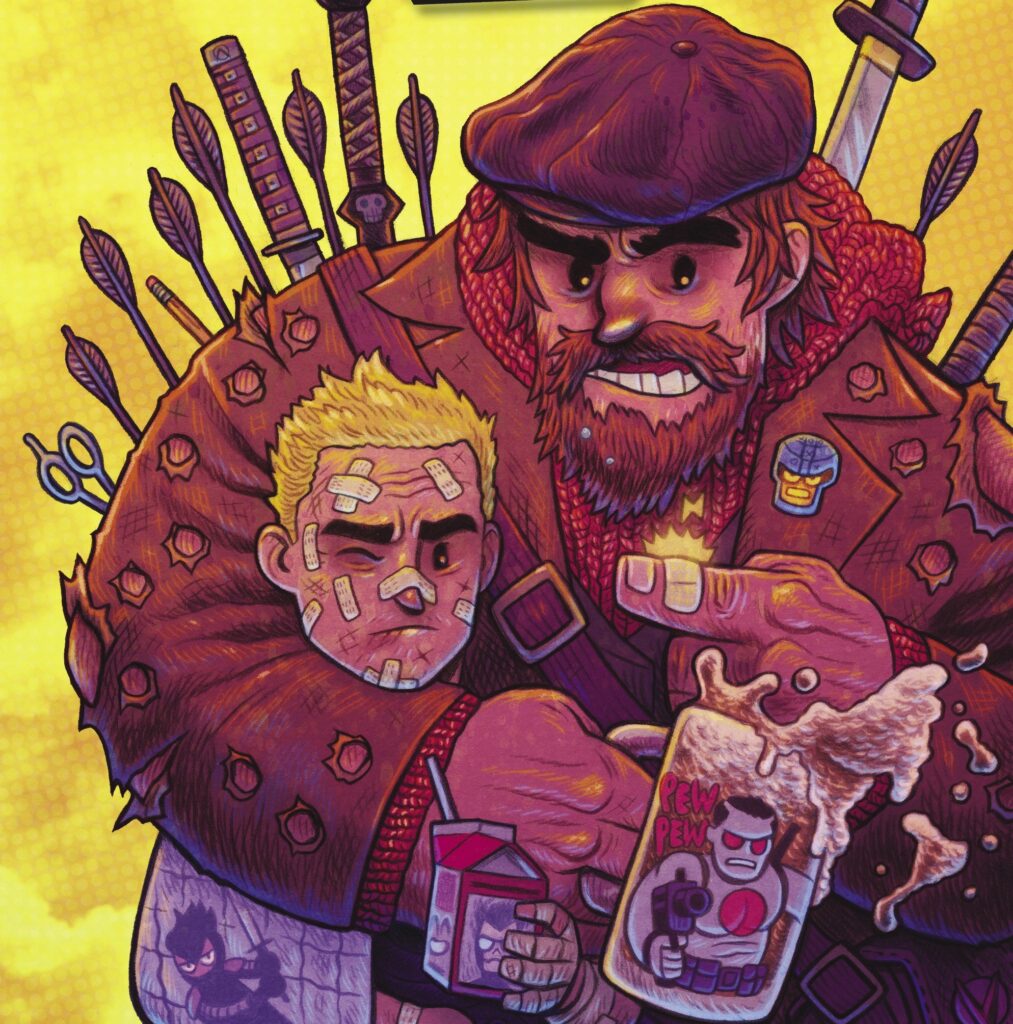 CW: Issue one comedic timing is excellent! I’ve never written any funny stories, do the jokes just come to you, or do you add them later?

SF: Thank you! I consider horror my home base as a storyteller, and I feel that comedy and horror are both difficult to nail in comics because both rely so much on timing and controlling the audience’s consumption of the media. In comics, there’s a lot we can do to guide the reader, but ultimately the reader controls their experience with the book: how fast they turn the pages, if they glance ahead, etc.

My approach to A&AF was influenced by taking in a lot of classic action movies at the start of the pandemic. Die Hard, Police Story, stuff like that—there’s a lot of comedy, but it’s situational, built into the events occurring on screen, and never undercuts the thrill of the action. I’m not a huge fan of the tossed-off-quip school of comedic writing—“Can you believe that just happened?”—so I try to build the comedy into the adventure hijinks the boys get up to throughout the book, which means most of the jokes are there from the early drafts. Wordplay definitely gets revised as Marcio’s pages roll in, though, and Hass actually adds some really fun bits himself at the lettering stage. Some of my favorite jokes are all him!

COMIC WATCH: How did this project come about? Did you always want to work on a Valiant comic like this?

STEVE FOXE: Oh yeah–I was in on the ground floor when the current Valiant line launched a decade ago and getting to contribute to this universe pretty quickly went on my mental goal board. As a creator, the appeal of a shared universe that’s both super expansive but also thoughtfully curated and consistently growing is huge. I love the absurdly complicated tangled webs of other shared universes, but Valiant feels cohesive in a way those can’t, just by sheer force of time and volume.

I also saw how Valiant creators pushed the limits of sci-fi, action-adventure, and superhero-adjacent storytelling in the pages of Valiant books and have been desperate to get my grubby mitts on these characters! For a kid weaned on stuff like New X-Men and The Authority, seeing that boundary-pushing possibility just gets my gears turning.

As for how A&AF initially came about, my wonderful editor Rob Levin reached out about potentially pitching for Valiant, we quickly realized we had a shared love of ARCHER & ARMSTRONG, and the rest rolled out from there! We are very lucky to be joined by Marcio Fiorito on line art, Alex Guimarães on color, Hassan Otsmane-Elhaou on letters, and Audrey Meeker working with Rob on the editorial side. We’ve become a very close-knit creative team and I can’t wait for folks to see all the hard work and passion that went into these pages. My own role in the book aside, I think it’s an amazing showcase for everyone involved.

CW: How do you view the characters ARCHER & ARMSTRONG? Will you take on any surprising twists for these characters’ personalities?

SF: I would say that fans of ARCHER & ARMSTRONG are going to find these to be the guys you know and love, but the goal of the book is definitely to test their limits—and their friendship—and remind you why you love them. And for readers who aren’t familiar with Obie and Aram, we worked pretty hard to make sure the first issue gives you everything you need to know to jump in.

What’s so enduring about this duo is that they’re both a classic odd-couple—the hard-drinking erudite immortal versus the dutiful sheltered golden child—but they’ve also grown and changed together. So while Obie is very much influenced by being raised in a religious cult to be a perfect assassin for their extremist cause, and Aram can’t not be shaped by living for centuries as everyone you know grows old before your eyes, leaving him with no recourse but to drink and be merry and live in the moment, they’ve also learned to see the world through each other’s eyes…to an extent. 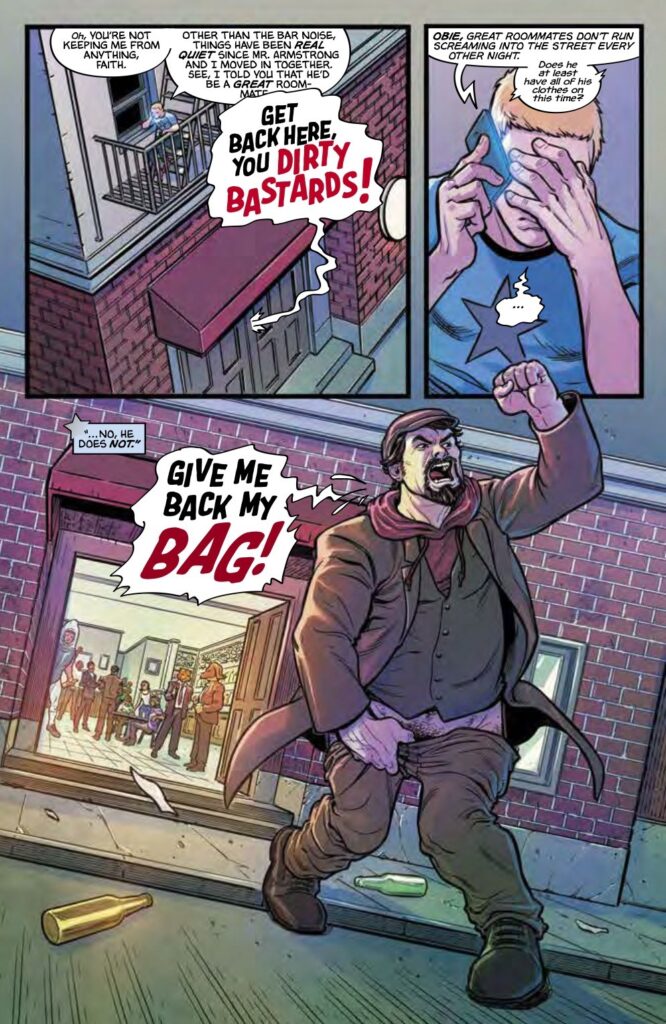 CW: ARMSTRONG gets into some crazy drunken adventures. If you drink, do you have any of your own you want to tell?

SF: Aside from one time my college roommate switched out the cranberry juice for cran-vodka without telling me, I’ve actually, genuinely never had a drop of alcohol. But my favorite horror story is from Halloween night 2009, when my ex lived on a fifth-floor walkup overlooking Second Avenue in the East Village. Our three gal pals dressed as the Powerpuff Girls and got obliterated, making the five-floor trudge up marble steps into a nightmare obstacle course. Then all three found different spots to puke in his tiny pre-war bathroom. Capping it off, our friend who was dressed as Professor Utonium held his alcohol perfectly until he sat straight up, announced calmly he was going to hurl, then flung the bathroom door open…right into Bubbles, before throwing up in Buttercup’s hair.

So yeah, this is why I don’t drink.

CW: What should fans of A&A look forward to in this series?

SF: Globe-trotting adventures to save your best friend, some light vomit (but not as bad as the anecdote above), a missing link, Faraway travels, grotesque new faces, heartbreak from old faces, a tale of friendship as old as time, family reunions, weird trinkets, cannibalism, yoga (or maybe pilates?), ear holes, the nastiest mermaid you’ve ever seen, a crime against literature, and a creative team that’s having an absolute blast working together to celebrate—but also strenuously test—one of the buddy duos in comics.

CW: And lastly, I got this amazing stress ball in the shape of an ear which was a mega funny gag. What did you think of this promotion from Valiant? They’re surprisingly effective and very unique!

SF: I have been blown away by all the support the book has gotten from Valiant! Amazing variant covers, an enamel pin, mini-prints, a poster, and THE EAR. I am disturbed by the ear, and yet I love the ear. If this is my legacy in comics, so be it.

Thanks so much for your time, and for taking us on this wild A&A adventure. 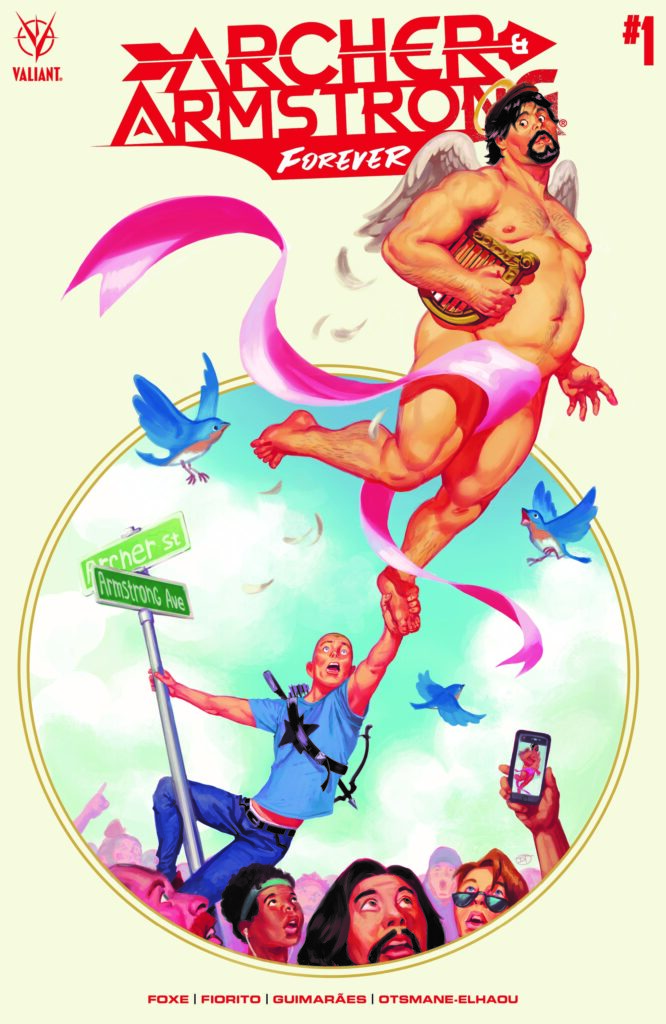 How Far Will You Go To Be Happy? Comic Watch Talks with Rich Douek about Happy Hill!
February 26, 2022

Bringing People Together: An Interview with Christopher Carter of GlobalComix
December 3, 2021