How Far Will You Go To Be Happy? Comic Watch Talks with Rich Douek about Happy Hill!

Comic Watch: Thank you for sitting down with Comic Watch and talking about Happy Hill with us. We really appreciate it. First off, how did you guys come together to work on Happy Hill?

Rich Douek: Joe and I have been friends for years, having met at NYCC a while back. We’d wanted to work together for a while, and wound up collaborating on our first book together, Wailing Blade, in 2019. We just worked really well together on that and decided that we wanted to continue collaborating on projects. Joe had the idea for Happy Hill kicking around in his head, and started working on it – then brought me in as a co-writer, which has just been great.

CW: I really enjoyed how well-paced the first issue was. It has a great early 2000s type of horror/thriller vibe to it. How did the story come about and what were some of the influences that struck ya’ll while the story was forming?

RD: I think some big influences here are classic “creepy destination” stories like The Shining or even slasher movies like Friday the 13th or Sleepaway Camp. Combine that vibe with something crazy like Willy Wonka, and you’ve got something approaching what Happy Hill is like to visit. 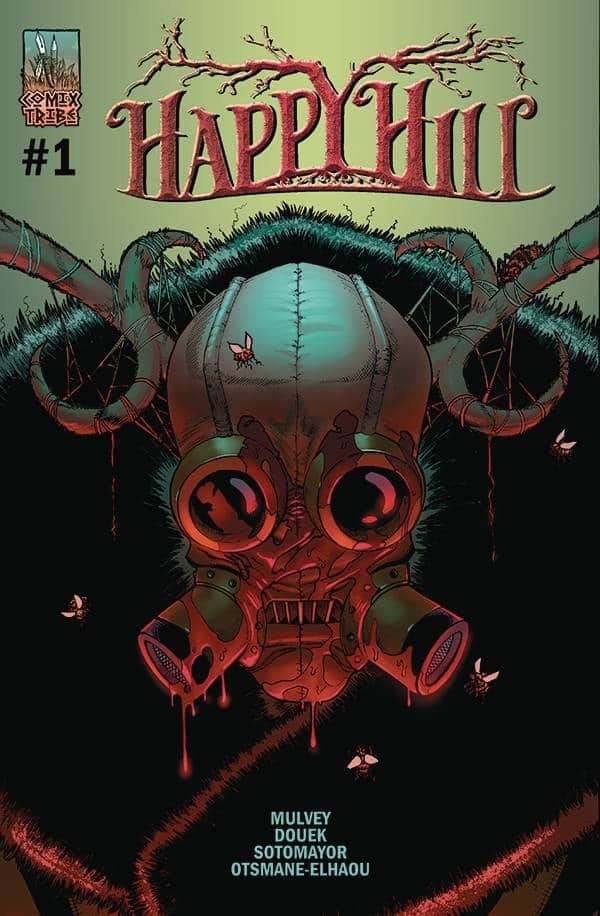 CW: For those that may not know, Happy Hill was originally on Kickstarter. How did you guys come to work with Comix Tribe and how has the experience been going from Kickstarter to Comix Tribe?

RD: Comixtribe started as a small publisher looking to put out really high-quality books, and Joe has been a part of it from the start. For me, it was a publisher that impressed me not only with the content but with how open and transparent they were about helping anyone make great comics. So when I found myself at a con they were exhibiting at, I went and introduced myself to Tyler, the publisher, and met Joe, John Lees, and lots of other talented folks, who I still keep in touch with today.

As far as Kickstarter goes, working with Comixtribe is the best of both worlds – because while Kickstarters can be fun, and really profitable, they’re also a lot of work. The fanbase on Kickstarter is engaged and enthusiastic like no other place, and my favorite part of it is interacting with the backers and seeing how excited they are to be a part of my projects. My least favorite part is all the technical stuff, like printing, fulfillment, pricing things out, etc., which is why working with Tyler is so great – he’s pretty much got that stuff down to a science, so we can just concentrate on making the book the best it can be.

CW: Speaking of urban legends, are there any that give you the creeps just thinking about the possibility they could be real?

RD: Black-eyed kids really creep me out, lol. I know there’s a comic out there based on the urban legend, and I didn’t read it because I find them so unsettling, haha. For real, though, I’m sure I will read it someday, but yeesh. Creepy.

CW: Thank you so much for taking the time to talk with us, this was absolutely our pleasure. Are there any upcoming projects on the horizon?

RD: Next up for me is a new horror series with Aftershock Comics called THE OCEAN WILL TAKE US, that will be out in April. It’s going to be a lot of fun. I’ll have more stuff coming up later in the year, but it’s unannounced as of yet, so I have to keep quiet about it!

How Far Will You Go To Be Happy? Comic Watch Talks with Rich Douek about Happy Hill!