It’s About the Fights 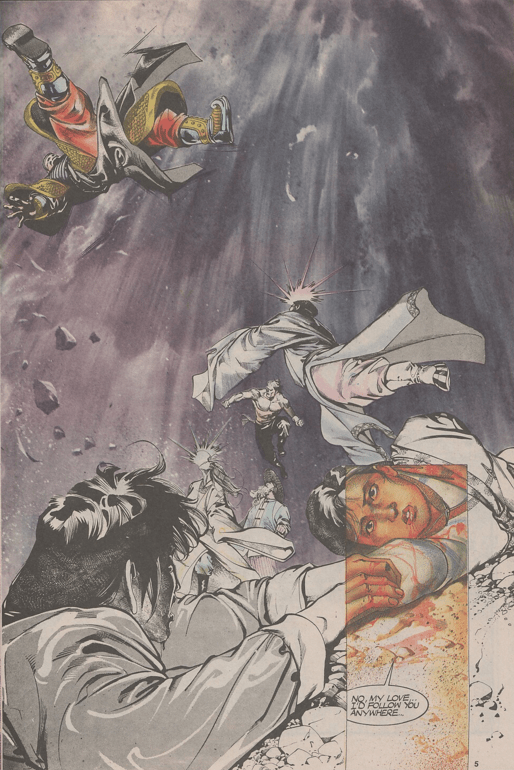 Ma Wing-shing’s Chinese Hero ran for fifteen years in China, and has been translated into English as Blood Sword, Blood Sword Dynasty, and Tales of the Blood Sword. All of the translations are altered from the original content beyond the text shifting language, and all of the translations are awkward. More than awkward, some of the Blood Sword Dynasty translation is gleefully, if also lazily weird. So, why should you, anglophone reader, want to read eighty-some chapters of awkwardly translated fight comics with a huge multi-generational cast that launches itself with examples of how rotten “westerners” are? Why would you not want to read an awkwardly translated multi-generational fight comic tackling early 20th Century imperialism head on?

Patricia Highsmash
It’s About the Fights
by Travis Hedge Coke

It is a credit to the breadth of Ma’s genius that, at only around twenty, Ma was already a five year veteran of professional comics and created a series that traded thoroughly and delicately on intergenerational drama, world politics, and romantic entanglements, the subtleties of friendship and other social alliances, vocation and work, sport and internal growth without ever sacrificing the energy of the fight scenes that are the bread and butter of wuxia. 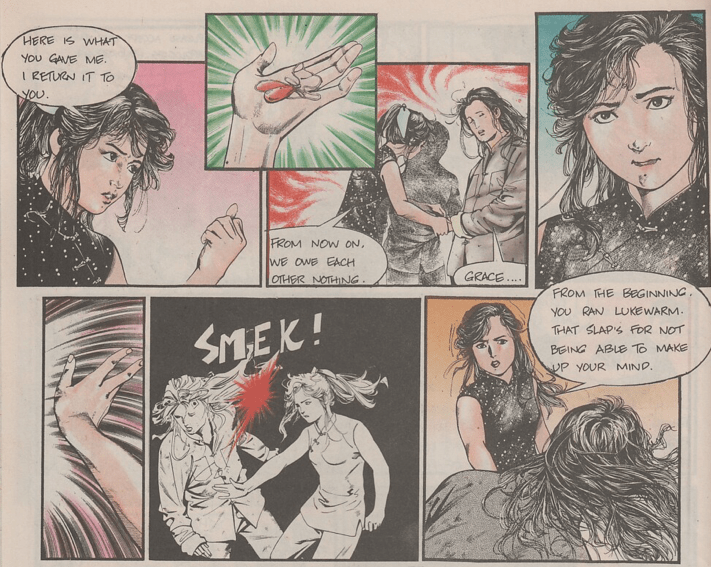 Wah Ying-hung’s life is stretched before us as a scroll, each line readable on its own, but the curled sections we cannot read still apparent to us. His life is peopled with fantastic and common figures, as he walks all strata of class and livelihood constantly getting into fights. To remove the fights from an appraisal of the narrative, or to ignore their significance in generating story and purpose would be a comforting misstep to make, but still misstep.

Chinese Hero is a fight comic. It is a comic about conflict, the vivacity of conflict and the spirituality. 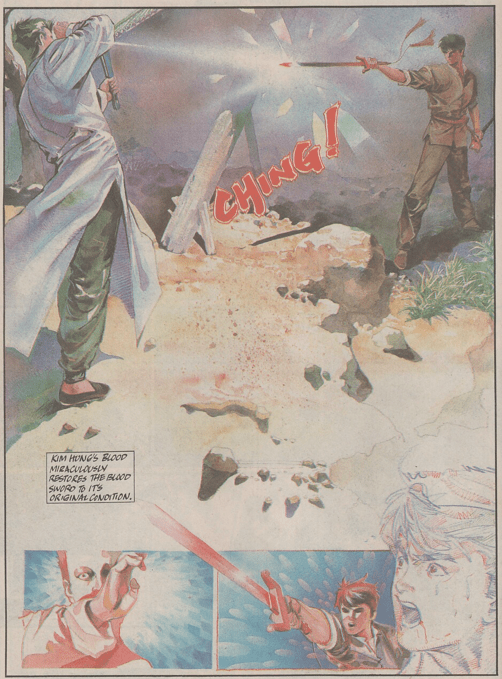 It is impossible for a non-Chinese audience, maybe even any modern audience, to fully grasp the politics at play in Chinese Hero as they functioned during publication for the original audience. Changing the name of various factions to 1990s American gangs, for the original American market translations – Bloods; Crips – and names that sound like they could be gangs, evocative titles, trace the original with a pencil line of contemporaneity and relevance for that audience. It also obfuscates the original inflections even further than mere foreignness would. Once, “Crips” is embedded in your brain, for a kung fu school/political faction that practice body deformation and growth stunting, the “crippling,” aspect remains, but it is sublimated to the Crips – an actual organization that exists – that is overlain on that original. We lose even the surface of the original depth, for the texture of the tracing above that.

Normally, that loss of clarity might bother me, but with Chinese Hero, it becomes intoxicating. It is the blurred and doubled vision that evokes a stone drunk high. And, how much else is wuxia for, but that feeling?

That drunken feeling highlights the emotional pitch and yaw of long term relationships, friendships, loves, children and parents. Romance and friendship are given spiritual intensity early on in the comic, and it never lets up as the relationships entangle and complexify over the many years that the story stretches. Chinese Hero is a tool for learning, but the protagonist’s learning curve is almost a circle, gaining little in the end, while talent working on the comic and its audience can outgrow its characters quickly, while still growing along with the narrative and expressions in the comic. 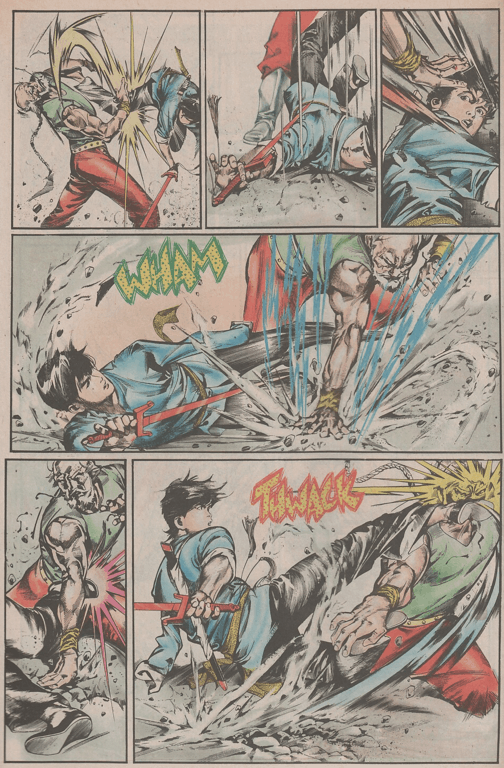 For reasons best not speculated on, dialogue in the translations is sometimes misattributed, scenes are sometimes accurately translated in a literal or line by line sense, but the complexities are lost or reinvented in ways that direct the scene away from the feeling or narrative the original was building towards.

The translations are also edited from the originals, removing entire storylines, combining pages, extending passages with new art, new text. Our sense of time becomes flexible and maybe ethereal, if we read enough at one go. Conversations that last moments can break into fights that seem to go into a punctuated forever of blows and counter strikes. Fights like sweet jazz with evocative names for every move and ideology, histories of techniques and training spilling from the kicks and blocks as the characters pose, their hair alive, their limbs electric, and the ground and air around them aglow with purposefulness.

When Wah Wing-hung’s child, Wah Kim-hung, takes over the serial as the protagonist, only to make many of the same mistakes as his father, to rush after the same immaterial and material things, the sense that this is a generational saga, but also a cyclical development becomes intimate. Ma Wing-shing’s great innovation is that even his fight comics, like Chinese Hero, are less about brutality, less bloody, less consequence-less in their  violence, than their predecessors or even contemporaries. Ma Wing-Shing’s comics were about, foremost, ideas, people, and movement. Ideas and people in movement, generating movement within and for one the other, the other for the one. 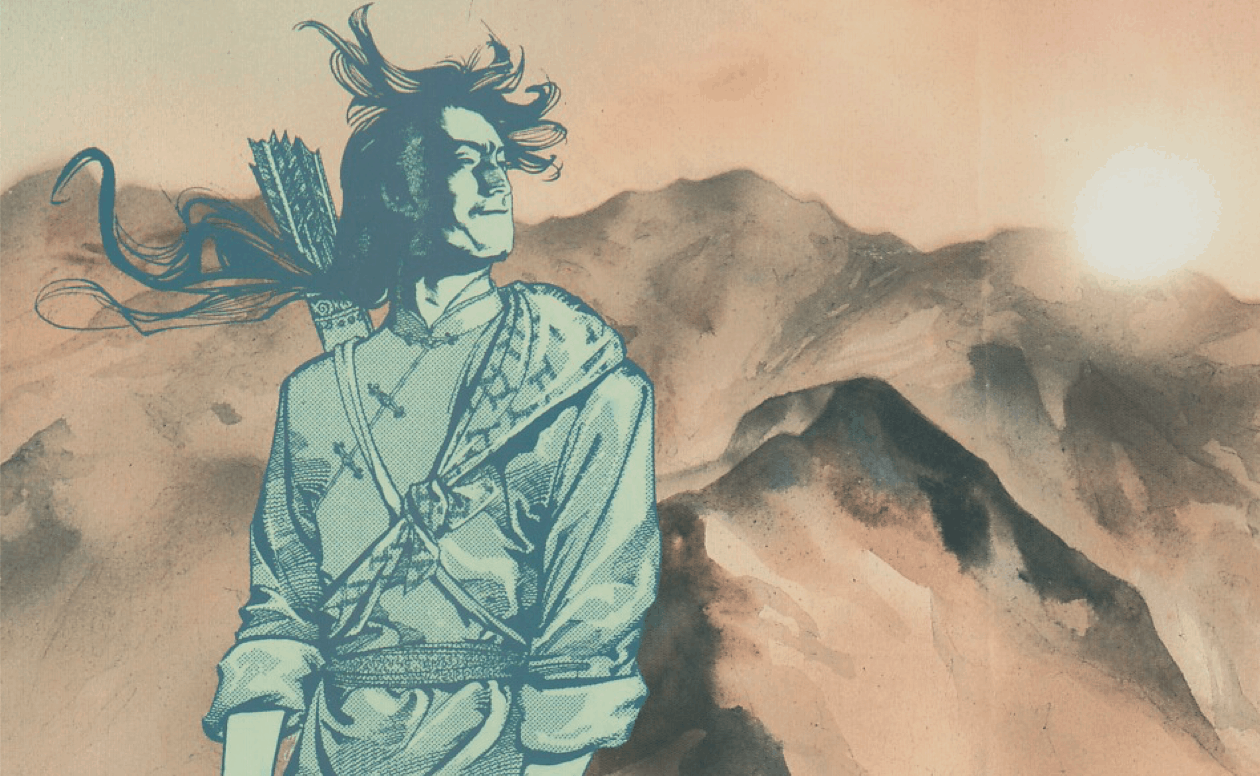 Ma produces and publishes now, more than he creates. He says his art, now, is for himself, even if it is shown or sold to audiences. His publishing house, Jonesky, has helped turn his own comics into films, dance company productions, t-shirts, as well as publishing Chinese and foreign comics for a wide range of audiences. He broke into professional comics as a teenager and has never left, never stopped being a recognizable force and influence.

It is easy to armchair psychoanalyze Ma, who lost his father when he was a toddler, and to extract from his real life the threads of his fictional comics. He, himself, has said that his portrayals of fathers and sons, including Wing-hung and Kim-hung, may be lacking due to his personal experiences. He ascribes his drive to perfecting himself and his work, and expressing that perfection as an appreciation to audiences, that guided the first several decades of his life, to being raised by a single mother, to working so young and rising to the heights of his field while still that young.

What is harder to grapple with is why, if these were so personally-derived of illustrations, that Chinese Hero, even with awkward translation, deliberate mistranslation, carries its messages so easily into such a large audience. The specific does not beget the universal, no matter what Hollywood screenwriting workshops may suggest, but like Wah Kim-hung’s lost arm, there are many things we cannot touch, but carry phantom life, living phantom life; things we will carry. It is Ma’s power to show us simple, true to life scenes, and absolutely mad fantastica and have us feel in that fantastical material, the same levels of truth and intimacy that keeps audiences returning. It is the truth of the world that it is neither only mundane or exciting, small or large.

It’s About the Fights