Marvel’s Jewish Voices: Where Are They?

Another year of Marvel’s Voices is gone, full of new characters, beloved characters, in stories meant to highlight their voices and experiences.

Since Marvel’s first Voices issue, I have had the question: will we ever get a Jewish Voices version? I felt hopeful as Marvel featured voices of diverse groups, sharing their experiences and celebrating them as amazing superheroes fighting for a better world. Folks told me to wait for x holiday; it would make sense for them to announce a Jewish-focused issue in time for Rosh Hashanah or during American Jewish heritage month. But alas. The Jewish new year came and went, the everyone-knows-holiday Hanukkah came and went Purim, Passover, and American-Jewish heritage month heading back towards Rosh Hashanah, And nothing. Not a peep.

But spring gave us Moon Knight, the MCU’s first and incredibly flawed attempt at bringing Jewish representation to its universe. Though it had terrific visuals, the show wasted the opportunity to elevate Jewish storytelling. And that isn’t to say all of Moon Knight needed to focus on Marc. On the contrary, it would have been nice if they had kept his original backstory of having a father who was a Hassidic Rabbi and a pacifist or the more recent tale of his experiences with antisemitism. The casting of Oscar Isaacs, a non-Jewish actor aside, it would have been cool if they had leaned in more at the possibility of Marc being Sephardic. It would have been amazing. But they needed Sephardic voices in writing and production departments to do that.

Instead, we got an abusive mother, and Marc’s connection to Jewishness was jumbled at best and completely unexplained. How does his mom fit into his views on Judaism? What does Judaism mean to Marc? Because Marc is never shown participating in Jewishness. He doesn’t attend either Shiva, or his mother’s abuse has zero connection to Judaism. Leaving Marc’s relationship with his heritage vague and erased at worst. A few well-placed Afikomens do little for Jewish audiences. The closest thing we get to authentic Judaism is the Kippah crying scene in his childhood neighborhood that has zero emotional connection for the audience. Is Marc crying over his Kippah? Is he crying over his dead abusive mom? His lost childhood? His brother? What does the Kippah have to do with anything? Historically, Marvel had terrific Jewish creators like Jack Kirby and Chris Claremont turning the company and their characters into a household name. We also had incredible Jewish characters who spoke about bigotry and antisemitism. We had a revelation about Magneto’s Jewish identity; we had Kitty Pryde talking about antisemitism and stopping a vampire by the power of her faith, written by Chris Claremont. We even had a comic where Magnet fought the Red Skull written by Mark Gruenwald. We had Billy Kaplan identify as a “gay Jewish Avengers fanboy” in Avengers, the Children’s Crusade by Allan Heinberg.

More recently, Ben Grimm and Alicia Masters in Fantastic Four (2018). And Billy Kaplan and Teddy Altman in Empyre had a Jewish wedding. Both ceremonies included Jewish individuals wearing kippahs, a huppah, breaking the glass, and the same Rabbi. Kudos to Marvel for giving us an official Avengers Rabbi. 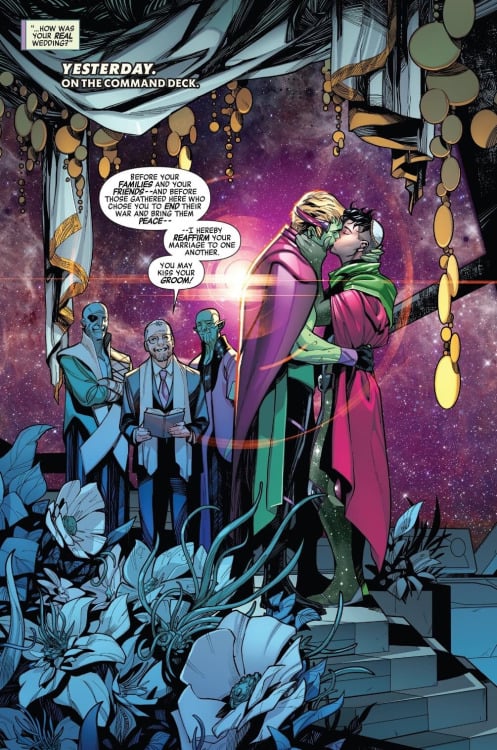 As Jewish people, we get moments of Jewishness, like weddings or an occasional Hanukkah story woven between Christmas specials. But it has been too long since a story related to a character’s Jewish identity. Regarding Jewish history and Jewish identity, Marvel comics are all too happy to flaunt Jack Kirby’s work and celebrate the characters he created and co-created. Every documentary mentions Jews who turned Marvel into a household name. And yet, it acts as though antisemitism ended at the same time as World War II when it went nowhere and has increased exponentially, particularly in the last ten years.

So, for all the benefits Marvel and the entire comic book industry have reaped off Jewish men and women, where is the representation? Where are the stories?

There is a distinct lack of Jewish representation behind the scenes and the company’s far too easy dismissal of erasure based on “oh, well, this is how we’re writing it” or “well, that’s not central to the story.” Unfortunately, this logic is similarly reflected in the MCU, which worries Jewish fans as more Jewish characters are rumored to appear in future projects.

But this isn’t just a Marvel problem. It’s an industry problem; whether we’re talking about DC comics or the movie industry, this is a broad issue: lack of Jewish creators, lack of Jewish stories, lack of representation of Jewish superheroes on-screen aside from an occasional Afikomen here and there. DC is bringing Atom Smasher in their Black Adam film. Will the character’s Jewish identity be referenced? Probably not. He’s certainly not played by a Jewish actor. When was the last time a Jewish character was featured in a Jewish-related storyline at DC? Every time a Jewish person mentions that erasing Magento’s origin as a Jewish Holocaust survivor is a problem or wanting a Jewish actor to play Magento, the excuses start, each one more ludicrous than the next antisemitism quickly follows.

So what is the answer? What can Marvel Comics and Marvel Studios do to address this problem? First and foremost, they must acknowledge that there is a problem. Antisemitism is a form of bigotry, not unlike many others. Second, recognize and incorporate Jewish identity into Jewish characters. It’s doable. Thirdly, hire more Jewish writers who are proud and unapologetic about their Jewish identity; hire them to write and draw the comics and help produce your films and television series for these characters.

Lastly, put a little effort into research, talk to Jewish people, not just the reform temple down the street, but the orthodox temple, walk among the Sephardic communities in California or the Kavkaz communities in New York, and listen to Mizrahi voices, learn from Ethiopian Jewry, or Russian Speaking Jewry, and understand the beauty and diversity of Judaism. It sounds like a lot, but hiring Jewish creators and actors for the MCU will help bridge the gap and create more unique and incredible storytelling. With at least four Jewish characters headed to the MCU, Magneto, Kitty Pryde, Ben Grimm, and Billy Kaplan, the fear of erasure is real. Marvel comics and Marvel studios need to do better when it comes to Jewish representation.

Marvel’s Jewish Voices: Where Are They?