NEWS WATCH: A Portion of Proceeds from MAKHNO: UKRAINIAN FREEDOM FIGHTER Will Be Donated To Benefit Ukraine 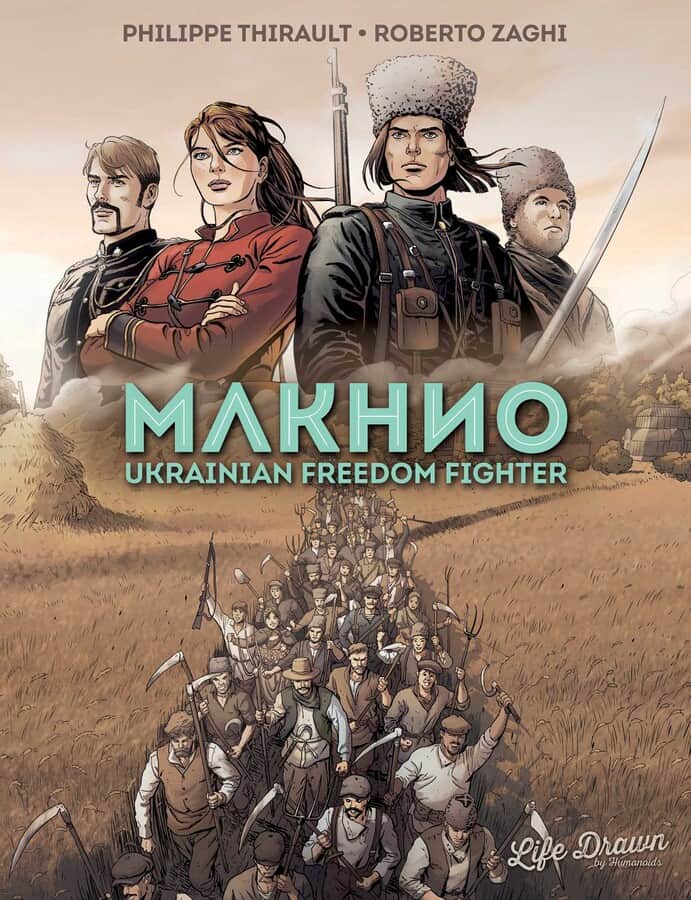 (March 22) Humanoids has announced that a portion of the proceeds from the sale of their upcoming graphic novel MAKHNO: UKRAINIAN FREEDOM FIGHTER will be donated to the Ukrainian nonprofit organization Razom, which supplies medical aid to Ukrainian fighters on the front lines. MAKHNO: UKRAINIAN FREEDOM FIGHTER by Philippe Thirault (Miss: Better Living Through Crime) and Roberto Zaghi (Tex Willer) is the spellbinding true story of the infamous Ukrainian anarchist and revolutionary Nestor Makhno.

In early 20th century Ukraine, anarchist Nestor Makhno, the son of peasants, was among the most heroic and colorful figures of the Russian Revolution, encouraging his people to find and embrace social and economic self-determination. MAKHNO is the story of a military strategist who tirelessly defied both the Bolsheviks and the Germans to protect his homeland.

In support of the people of Ukraine, a portion of the proceeds from this book will be donated directly to Ukrainian relief efforts through the nonprofit organization Razom. “In the spirit of Nestor Ivanovich Makhno himself, a courageous freedom fighter who took more than once to the front lines of combat, Humanoids has chosen to donate to the organization working most directly with the freedom fighters of today,” said Humanoids Publisher Mark Waid.

Philippe Thirault is a French novelist and comics writer who was born in Paris in 1967. In the late 1990s, he published the novel Feathered Serpent, the trilogy Hemoglobin Blues, and his first comic series, the critically acclaimed Miss: Better Living Through Crime.

Roberto Zaghi began working as a cartoonist in the 90s, for the Sergio Bonelli publishing house. Over the years he has illustrated issues of various genres for the series Zona X, Nathan Never, Legs Weaver, Orfani and Julia—the latter having met with great success in Italy.

HUMANOIDS is a global entertainment media company dedicated to bringing to life innovative and elevated contents with stunning visuals. Grounded by a fiercely independent spirit, the company is passionate about creating content that explores the power of art beyond boundaries, while focusing on the imaginative depth of fandom. Headquartered in Los Angeles, CA and led by CEO Fabrice Giger and Group COO Matthieu Coppet, HUMANOIDS is a major content provider in the expansive entertainment industry, recognized for its multigenre catalogue — from science-fiction, fantasy and thriller to comedy, adventure and children’s tales. Above all else, creators have always been the heart of HUMANOIDS as it continues to attract leading talents as collaborators and true auteurs of the iconic brand.

NEWS WATCH: A Portion of Proceeds from MAKHNO: UKRAINIAN FREEDOM FIGHTER Will Be Donated To Benefit Ukraine