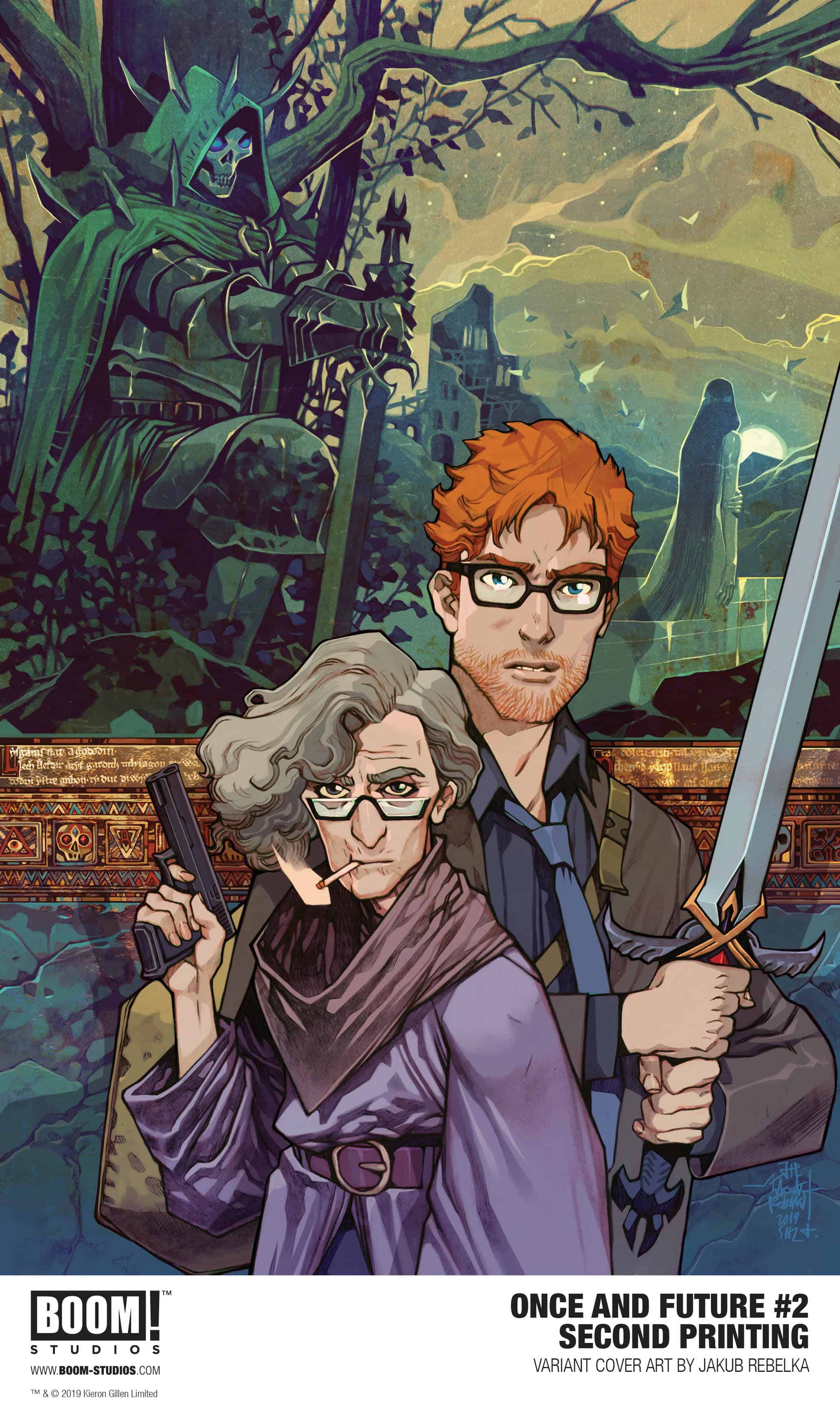 BOOM! Studios announced today that ONCE & FUTURE #2 the next chapter of the hottest original series launch of the year from New York Times bestselling writer Kieron Gillen (The Wicked + The Divine, Star Wars), Russ Manning Award-winning artist Dan Mora (Buffy The Vampire Slayer, Klaus), and acclaimed colorist Tamra Bonvillain (Doom Patrol), has sold out at the distributor level ahead of its September 18, 2019 release date.

Due to enthusiastic support from retailers and fans alike, BOOM! Studios has fast-tracked the ONCE & FUTURE #2 SECOND PRINTING VARIANT, featuring an all-new cover by acclaimed artist Jakub Rebelka (Buffy the Vampire Slayer, Judas), arriving in stores on September 25, 2019. As with previously fast-tracked printings, quantities are limited and allocations to retailers may occur.

The newest issue of the highly acclaimed and hotly anticipated new original series, ONCE & FUTURE #2 follows retired monster hunter Bridgette McGuire and her unsuspecting grandson Duncan as they prepare for battle against a rising evil that plans to take over their country to bring it back to its former glory.

There’s no turning back now as Bridgette drags Duncan deeper and deeper into the heart of British mythology and folklore to search for a way to stop a rising group of Nationalists from bringing an ancient and terrible power to life. Duncan’s just battled an absolutely impossible creature from legend and been shot—by his Gran, no less!—so he feels he’s due a few explanations, starting with how his nice, perfectly normal Gran knows so much about monsters and how to deal with them?! And what else has his family been hiding from him?

“Hot off the historic series launch, ONCE & FUTURE #2 continues to receive unprecedented support from retailers and fans alike and has sold out ahead of release despite a 20% free over ship to our retail partners. So we’re fast-tracking a second printing to make sure you don’t miss a single second of Kieron, Dan, and Tamra’s incredible new series,” said Filip Sablik, President, Sales and Marketing, BOOM! Studios.

ONCE & FUTURE is the newest release from BOOM! Studios’ eponymous imprint, home to critically acclaimed original series, including Once & Future by Kieron Gillen and Dan Mora; Faithless by Brian Azzarello and Maria Llovet; Abbott by Saladin Ahmed and Sami Kivelä; Bury The Lede by Gaby Dunn and Claire Roe; Klaus by Grant Morrison and Dan Mora; as well as the upcoming Something is Killing The Children by James Tynion IV and Werther Dell’Edera and Folklords by Matt Kindt and Matt Smith. The imprint also publishes popular licensed properties including Joss Whedon’s Firefly from Greg Pak and Dan McDaid; Buffy The Vampire Slayer from Jordie Bellaire and David Lopez; and Mighty Morphin Power Rangers from Ryan Parrott and Daniele Di Nicuolo. 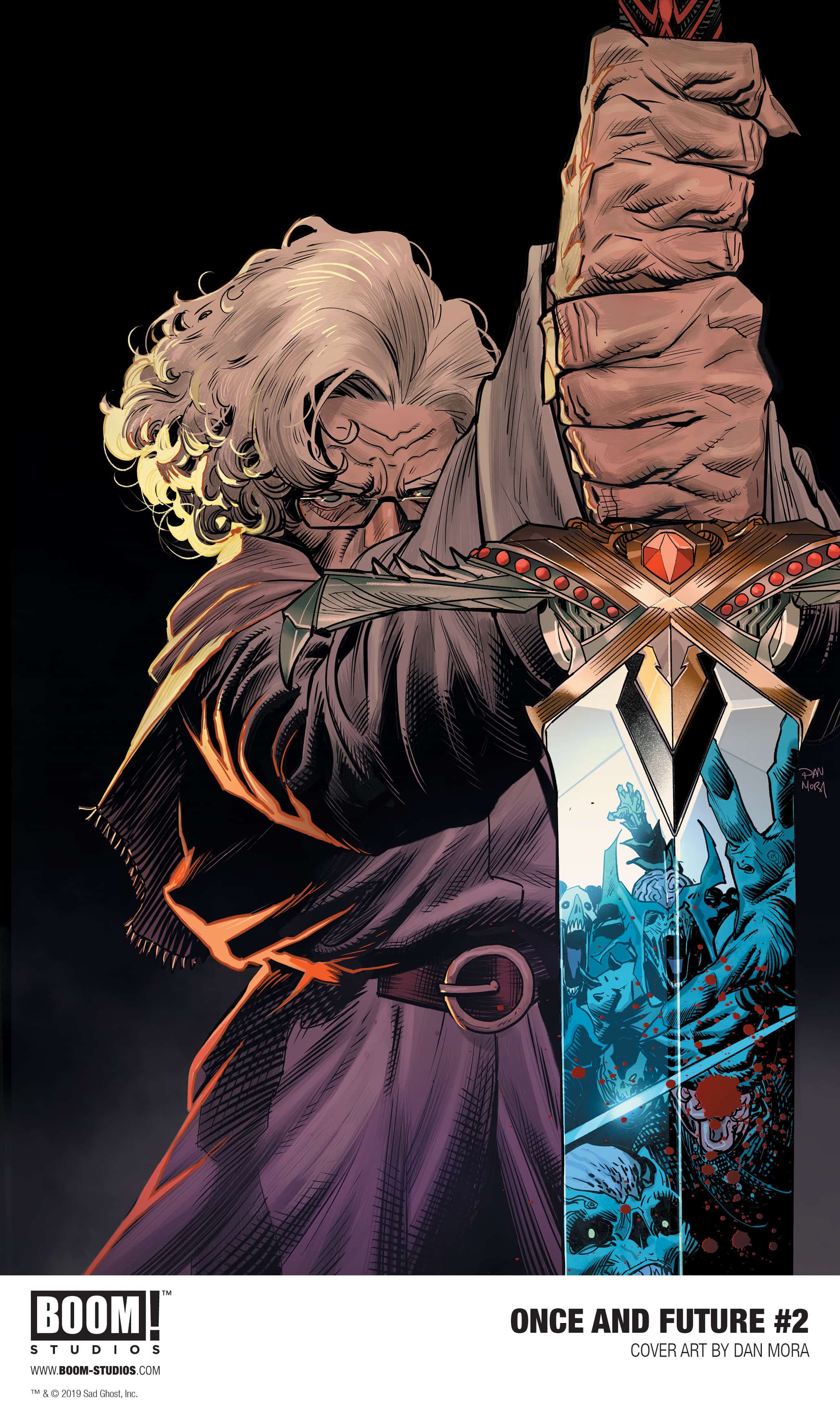