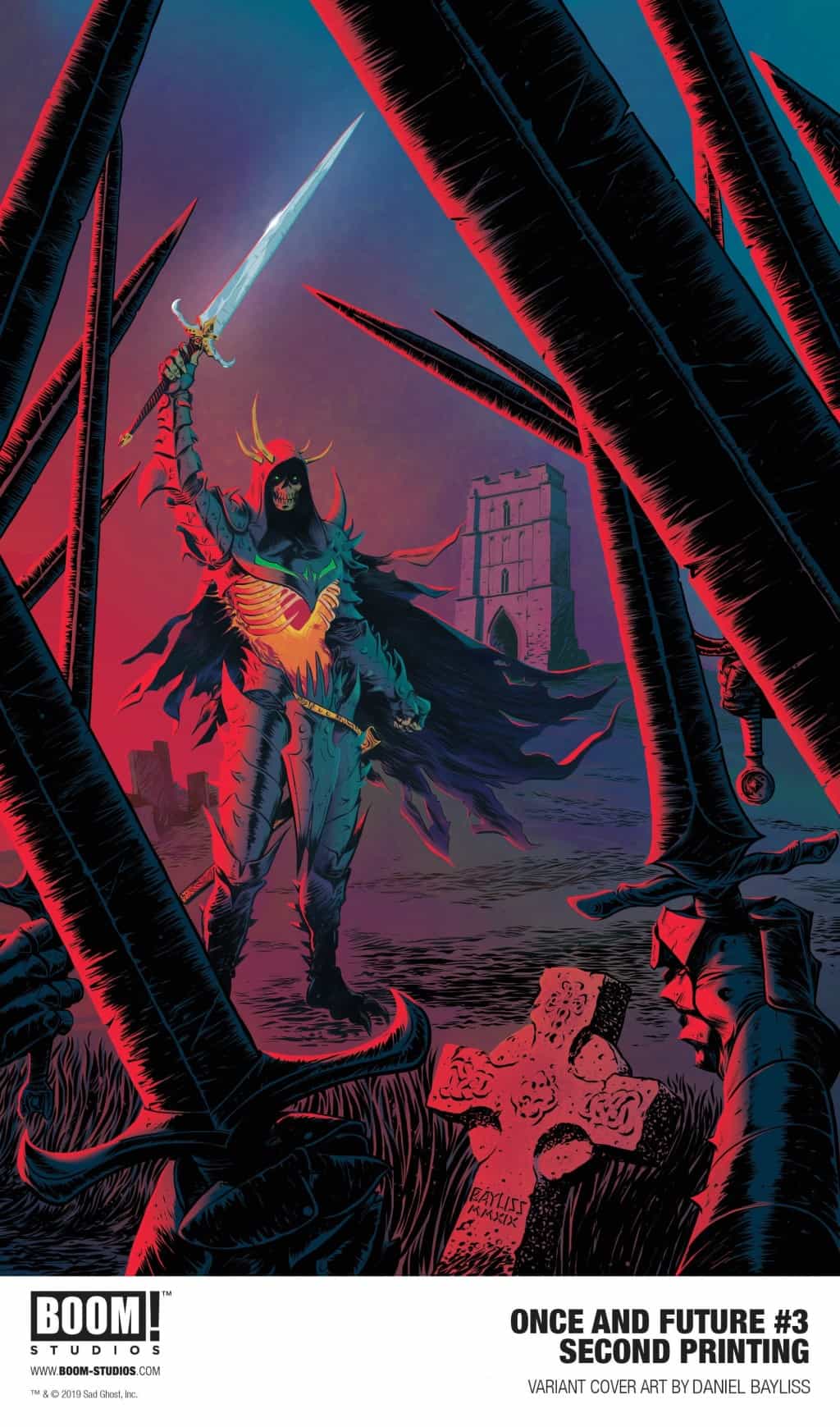 Due to overwhelming support from retailers and fans alike, BOOM! Studios has announced the ONCE & FUTURE #3 SECOND PRINTING VARIANT, featuring an all-new cover by acclaimed artist Daniel Bayliss (WWE), arriving in stores on November 20, 2019.

The newest issue of the highly acclaimed and hotly anticipated new original series, ONCE & FUTURE #3 follows retired monster hunter Bridgette McGuire and her unsuspecting grandson Duncan as they prepare for battle against a rising evil that plans to take over their country to bring it back to its former glory.

Duncan and his Gran were too late to stop the Nationalists, and now the ancient King is awake, looking to take power over his land once again and unite it under his rule—spelling disaster for Britain. The only way to stop him now is to track down the legendary grail! But with Arthur’s army growing they’re running out of time and resources, and what does Duncan’s disastrous first date, Rose, have to do with any of this?!

“The growing phenomenon of ONCE & FUTURE’s success is a testament to the readers’ passion for the series, as well as a direct result of the incredible retailer support for this breakout hit,” said Filip Sablik, President, Sales and Marketing, BOOM! Studios. “Each new issue is an absolute must-read to add to the top of the pile, so we’re truly excited to announce a second printing of the latest installment so new readers and series subscribers alike can discover the thrilling action, adventure, and mysteries that Kieron, Dan, and Tamra have in store for us!”

ONCE & FUTURE is the newest release from BOOM! Studios’ eponymous imprint, home to critically acclaimed original series, including Once & Future by Kieron Gillen and Dan Mora; Faithless by Brian Azzarello and Maria Llovet; Abbott by Saladin Ahmed and Sami Kivelä; Bury The Lede by Gaby Dunn and Claire Roe; Klaus by Grant Morrison and Dan Mora; as well as the upcoming Something is Killing The Children by James Tynion IV and Werther Dell’Edera and Folklords by Matt Kindt and Matt Smith. The imprint also publishes popular licensed properties including Joss Whedon’s Firefly from Greg Pak and Dan McDaid; Buffy The Vampire Slayer from Jordie Bellaire and David Lopez; and Mighty Morphin Power Rangers from Ryan Parrott and Daniele Di Nicuolo.