BOOM Studios released exciting news for its highly popular ONCE & FUTURE title has been sent for its fifth printing with all-new cover art. With an award-winning team of Kieron Gillen (The Wicked + The Divine, Star Wars), Russ Manning Award-winning artist Dan Mora (Buffy The Vampire Slayer, Klaus), and acclaimed colorist Tamra Bonvillain (Doom Patrol), it a complete no-brainer why this was sent back to the printers for the fifth time. You can read the full BOOM Studios press release below as well as check out the new cover art. As always, make sure you keep your browsers pointed to Comic-Watch for all your comic news and reviews. 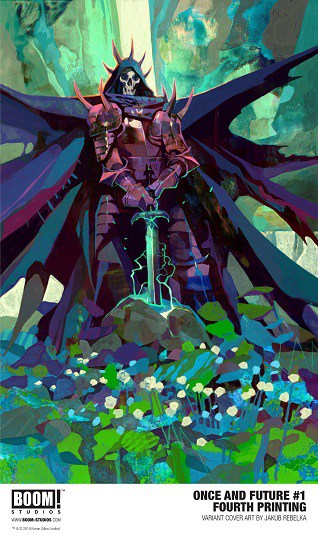 Due to the historic levels of demand from retailers and fans alike, BOOM! Studios have fast-tracked the ONCE & FUTURE #1 FIFTH PRINTING VARIANT, featuring an all-new cover by an acclaimed artist Khary Randolph (Excellence), arriving in stores on September 18, 2019.

The most anticipated original series launch of the year, ONCE & FUTURE #1 introduces readers to ex-monster hunter Bridgette McGuire, who must pull her unsuspecting grandson Duncan, into a world of magic and mysticism to defeat a legendary threat when a group of Nationalists uses an ancient artifact to bring a villain from Arthurian myth back from the dead. Now Bridgette and Duncan must navigate the complicated history of the McGuire family and combat the deadly secrets of England’s past that threaten its very future.

“We’re thrilled to see that ONCE & FUTURE #1 has not only created a fervor among our retail partners but is now flying off store shelves. We want as many new readers to discover this amazing new world that Kieron, Dan, and Tamra have created and as quickly as possible,” said Filip Sablik, President of Sales and Marketing, BOOM! Studios. “In order to fast track this new printing to comic shops and despite increasing our print runs with each successive printing, allocations may occur in order if these unprecedented levels of demand continue to outpace our supply.”

ONCE & FUTURE #1 is the newest release from BOOM! Studios’ eponymous imprint, home to critically acclaimed original series, including Once & Future by Kieron Gillen and Dan Mora; Faithless by Brian Azzarello and Maria Llovet; Abbott by Saladin Ahmed and Sami Kivelä; Bury The Lede by Gaby Dunn and Claire Roe; Klaus by Grant Morrison and Dan Mora; as well as the upcoming Something is Killing The Children by James Tynion IV and Werther Dell’Edera and Folklords by Matt Kindt and Matt Smith. The imprint also publishes popular licensed properties including Joss Whedon’s Firefly from Greg Pak and Dan McDaid; Buffy The Vampire Slayer from Jordie Bellaire and David Lopez; and Mighty Morphin Power Rangers from Ryan Parrott and Daniele Di Nicuolo.

Print copies of ONCE & FUTURE #1 First Printing, featuring cover art by artist Dan Mora, will officially be available for sale on August 14, 2019, at local comic book shops or at the BOOM! Studios webstore.

ONCE & FUTURE #1 Second Printing, featuring a new variant cover by Dan Mora will be available for sale on August 28, 2019, at comic shops.

And ONCE & FUTURE #1 Third Printing, with a new variant cover by Dan Mora, will be available on September 4, 2019, at local comic book shops.

ONCE & FUTURE #1 Fourth Printing, with a new variant cover by acclaimed artist, Jakub Rebelka (Buffy the Vampire Slayer), will be available on September 11, 2019, at local comic book shops. Digital copies can be purchased from content providers, including comiXology, iBooks, Google Play, and the BOOM! Studios app. 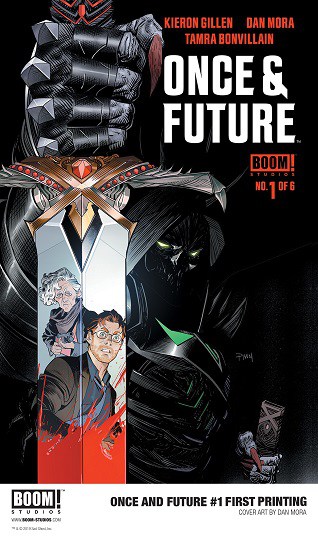 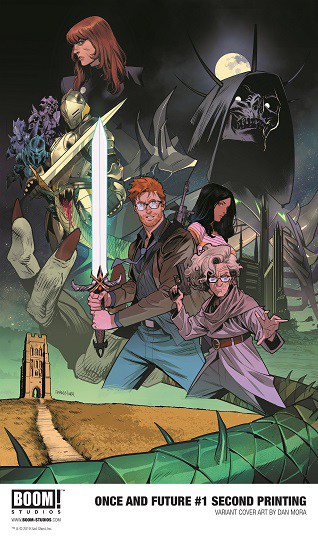 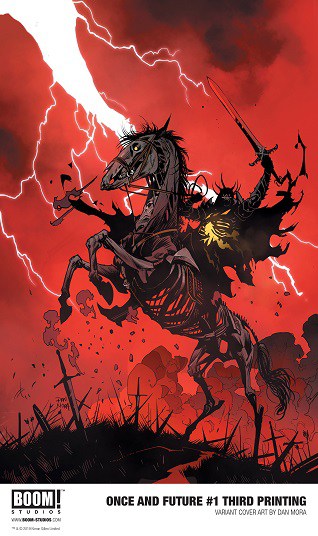